Why your local might be going into ‘hibernation’ next month: Thousands of pubs prepare to slash opening hours as dwindling demand and soaring bills bite

Thousands of pubs intend to slash their opening hours next month, hit by soaring energy bills and a lack of trade.

Half of landlords across the country plan to close their doors at quiet times, open for fewer hours each day or abandon their pubs altogether for part of the month, according to new research. Industry bosses described the retreat as ‘hibernation’ after a relentless run of bad luck.

Kate Nicholls, chief executive of UK Hospitality, which conducted the research on reduced opening hours, said: ‘The whole cost-of-living, cost-of-doing-business crisis is forcing them to say: “Maybe it is best if we don’t open fully and try to hibernate.”’

Hopes of a Christmas boost have already been dashed by nationwide rail strikes and the sudden winter freeze – which has forced many pubs to turn up their heating despite having fewer visitors. 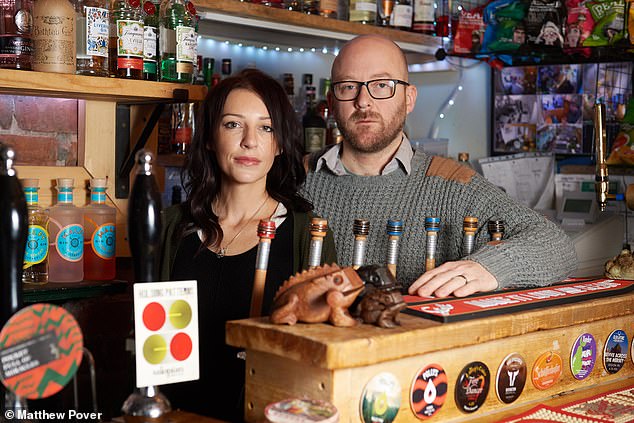 Thousands of pubs intend to slash their opening hours next month, hit by soaring energy bills and a lack of trade. Pictured: Married couple Robyn (right) and Michelle Jackson (left) at their bar, The Black Toad in Hoylake on the Wirral

Landlord Andrew Taylor plans to close the Adam and Eve in Alnwick, Northumberland, for two weeks. ‘It is easier to turn the lights off and pay the staff holiday,’ he said. ‘Otherwise, everything we make in December will just be going straight back out.’

He plans to close his other pub, Mr Fox in Croydon, for four days.

Sam Snape, landlady of the Lower Lode Inn near Tewkesbury in Gloucestershire, has cut opening hours. She said: ‘Some days we are only taking £50 a day. With all the staff in – and the energy costs – it’s just not viable. We don’t want to put off trade but we can’t just be open waiting for people to drop in.’

Robin and Michelle Jackson, who run The Black Toad micropub in Hoylake on the Wirral, are considering a drastically reduced schedule, pushing back the 1pm opening by several hours.

Mr Jackson said the Black Toad’s energy bill had tripled from £300 to £900 a month, putting a significant strain on his firm’s finances.

Of the estimated 47,000 pubs in the UK, about 50 close every month because they can’t make ends meet, according to recent research by property adviser Altus Group.

After the disruption caused by Covid, landlords had hoped this Christmas would mark a return to financial good health.

But the train strikes have upset Christmas party plans and led to many cancellations.

Anthony Pender, who owns two pubs in Central London, said: ‘This week we normally take more money than we do for the whole of January. And we’ve lost about £70,000 in bookings.’

Mr Pender, whose electricity bill has risen from £89,000 a year to £176,000, plans to shut for several days in early January but remain open for the rest of the month.

He said: ‘We will lose more money being open than we will closed. But if we’re not open for [customers] they will leave and never come back.’

Tom Stainer, chief executive of The Campaign for Real Ale, warned that closures threatened to ‘tear the heart out of communities’.

He said: ‘A pub is a place where you can go and get a bit of warmth and light. It’s where you can enjoy some company rather than being at home in the cold in the dark and being worried about whether you can turn the heater on or not.’