This, at last, is the Brexit fight Labour has been putting off for years. It might, finally, say what it wants.

And the result could mean the difference between Jeremy Corbyn in 10 Downing St or in electoral oblivion.

The latest UK poll puts Labour and the Conservatives almost neck and neck, at 27 per cent and 29 per cent respectively. These are both horrendously low numbers, but in a first-past-the-post system the only thing that matters is who’s first past the post. 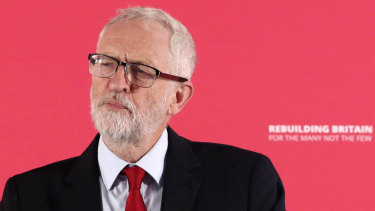 But another poll put Labour a landslide 15 points behind the Tories and a third put them third, behind the Liberal Democrats.

This is an extraordinary level of divergence. It shows four things: that Boris Johnson is in the box seat to win an election if it is called, but the electorate is more volatile than ever, the two-party system is more cracked than ever, and that nobody can predict with any confidence how it will all shake out.

An election is likely in the near future. Boris Johnson leads a minority government that has effectively lost the confidence of parliament. We have no idea what state Brexit will be in during an election campaign: deal, no-deal or another holding pattern. Each has pluses or minuses for each party.

But those parties’ Brexit policies will be key. 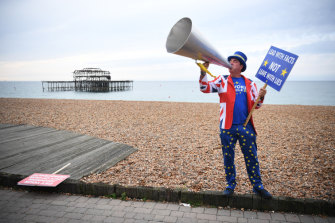 Pro-remain protester Steve Bray protests on a beach at Brighton, where the Labour conference is debating the party’s stance on Brexit.Credit:Getty

Brexit has become the new dividing line in British politics. It is what people care most about, mostly. It drives opinions. Surveys find people feel more strongly tied to their Remain/Leave political identity than to any party.

But this hides subtleties. There has already been a lot of Brexit “sorting” in party allegiance. Fewer than 10 per cent of Labour voters think the Brexit referendum decision was right, while 80 per cent of Conservatives do.

The received wisdom is that Labour must straddle the Remain/Leave divide to shore up its vote, but the truth might be the exact opposite.

In the north of England, even in majority Leave seats most Labour voters were Remainers. And many bear grudges from the eras of Thatcher and austerity and would rather cut off their arm than see it tick a Tory ballot box.

In this year’s European Parliament elections the parties with the least ambiguous positions on Brexit did well.

While the Tories’ job is to win back voters from Farage’s Brexit Party, Labour needs to fight off the Liberal Democrats, whose Brexit policy couldn’t be clearer: cancel the whole thing.

So the Labour conference fight is key.

Jeremy Corbyn is typically cautious. He has been dragged towards supporting a second referendum, but wants to do a soft Brexit deal with the EU then the party will choose whether to campaign for it.

His strongly-Remain party wants to nail down the referendum, and ensure Labour campaigns against Brexit from the start.

It's a subtle difference. And, after all, Corbyn campaigned for Remain in the last referendum, though with muted enthusiasm.

But the public, and Labour members care deeply. And Corbyn has long professed himself a “democratic” leader who follows his party’s lead (albeit after scheming fiercely behind the scenes to steer it).

Corbynism still burns in the membership but the Labour leader has the lowest public net satisfaction of any Opposition leader since surveys began. Ipsos Moris had public satisfaction with Corbyn at an astonishing 16 per cent, with 76 per cent dissatisfied.

Any sign of weakness or hypocrisy in Labour or Corbyn will be seized on by Boris Johnson.

Corbyn has tried to straddle a Brexit fence that is collapsing under him.

One way or another, he must pick a side.