From today, millions of Britons in cities, towns and villages are readying feasts of cucumber and coronation chicken sandwiches, knitting model corgis and putting up bunting and Union Jack flags. Labour Party leader Keir Starmer said the Jubilee is a “a chance for the country to let its hair down after a difficult few years.”

How did these traditions even begin? Here is a guide to the Jubilee celebration and all its pageantry.

What is the Platinum Jubilee and when is it happening?

The Platinum Jubilee is a year of celebrations in the UK and Commonwealth countries to mark the 70th anniversary of the accession of Queen Elizabeth II on February 6, 1952, which culminates with a four-day public holiday weekend. From Thursday, June 2, to Sunday June 4, the British government will host a series of events and installations that will “mix traditional pageantry with cutting edge technological displays” that will be mirrored by villages, cities and towns nationwide. 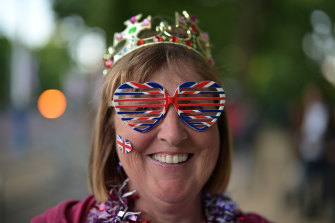 Royal supporters get ready for Trooping the Colour.Credit:Getty

What is happening on the Platinum Jubilee?

The celebrations start at 10am (7pm AEST) with a parade of thousands of soldiers down the Mall in London with an inspection at the Horse Guards Parade. An RAF flypast of 70 aircraft includes the Red Arrow display team and the RAF Battle of Britain Memorial Flight, featuring Spitfires, Hurricanes and other historical aircraft.

In the evening, thousands of flaming beacons will be lit around the UK and the world, starting in Tonga and Samoa in the South Pacific, and ending in Belize in the Caribbean.

There will be receptions at the Guildhall in the City of London, at the Epsom Derby there will be a photo lineup of the 40 jockeys who have ridden for the Queen, and around the country there will be tens of thousands of “Jubilee Lunches”. 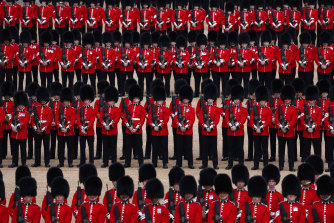 The Colonel’s Review is the final evaluation of the Trooping the Colour parade.Credit:Getty

What are the cutting edge technological displays?

Some of the displays include a Thomas Heatherwick-designed steel “Tree of Trees” sculpture outside Buckingham Palace, and a £15 million ($26 million) “People’s Pageant” carnival and finale on Sunday where there will be a 3D wire bust of the Queen, maypole dancers, a giant moving wedding cake that plays Bollywood hits, dragons and beasts, and a 20 foot tall puppet of the Queen as a princess, surrounded by corgi puppets. Ed Sheeran will play the people’s pageant out. 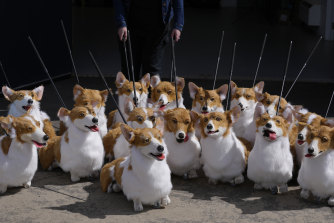 Some of the corgi puppets that will be part of the People’s Pageant. Credit:AP

Ok, so those are the official Jubilee events. What else?

The main event in villages and towns around the UK will be a nice long lunch. Local councils have received 85,000 applications to host Big Jubilee Lunches, some of them on closed high streets. It’ll all mirror a lunch held on a long table outside Windsor Castle on the historic 3-mile Long Walk. Elsewhere, you’ll see lots of knitting, cocktails and cakes. Holmes Chapel Yard Bombers Group in Cheshire made a hand-knitted life-size model of the Queen and her corgis. Stonehenge projected eight images of the Queen throughout her life onto the stones, prompting some to wonder why. 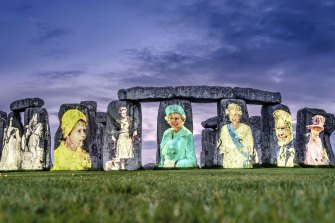 At the Bromsgrove High Street Platinum Jubilee committee, they chose to make their life-sized model of the Queen out of balloons, with their party featuring red, white and blue candy floss, royal sausages (extra high spice content), and punk music as a backing track because even former Sex Pistols frontman John Lyddon says he’s “proud of the Queen.”

What are the flaming beacons in the Commonwealth all about?

The flaming beacons being lit from Tonga to Belize give a nod to the Queen’s role as the head of the Commonwealth, the loose and fraying membership of 54 former territories of the British Empire. At the first Diamond Jubilee in 1897, Queen Victoria’s title included “Empress of India” to signify her rule over British India, and the event was marked by a Festival of the British Empire with a parade that included 11 colonial prime ministers. The beacons are the symbolic, soft power, pomp-and-ceremony version of the monarchy’s former direct rule over its now-independent territories. 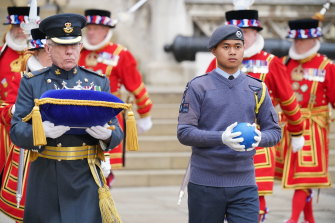 A member of the Royal Air Force Air Cadets, right, holding the Commonwealth of Nations’ Globe as it arrives at the Tower of London. The globe will be used in the lighting of the Principal Beacon at Buckingham Palace.Credit:PA

What is trooping the colour?

The British Army has been celebrating the monarch’s “official birthday” for the last 260 years, usually on the second Saturday in June with a parade of soldiers, horses and musicians, followed by a ceremony centred around the regiment’s military colours or flag. This year there’ll be a parade of 1500 officers and soldiers and 350 horses from the Household Division, with the colour trooped by the 1st Battalion, Irish Guards. They’ll be joined on the parade by soldiers from Commonwealth nations in Africa, Asia, Australia, New Zealand, the Pacific and the Caribbean.

Wait, the Queen has two birthdays?

Yes, Britain selects an official celebration day so there’s a better chance of good weather for the parade. The Queen’s “real” birthday is April 21, which she usually marks privately with her family and a 124 gun salute in London and Windsor. 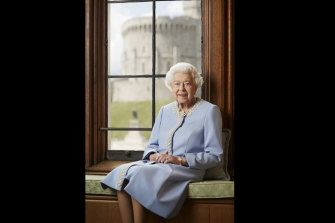 This is the official Platinum Jubilee portrait of the Queen, released on June 2. Credit:Buckingham Palace

Will it be televised?

Yes, BBC One will host televised coverage of the Platinum Jubilee weekend. The BBC’s first director general Sir John Reith was a devotee of the monarchy and supported the creation of “audible pageants” which became a permanent fixture on BBC radio after the Duke of York’s wedding in 1923. Microphones were set up around the event so listeners could hear the bells ringing, crowds cheering, carriages clattering and horses clopping down the Mall. This weekend the entire event will be broadcast on BBC One in full HD.

Will Prince Harry and Meghan attend?

The Duke and Duchess of Sussex will be in the UK for the Platinum Jubilee weekend, but they will not appear on the balcony for the RAF flypast, nor will any other non-working Royals, including Prince Andrew.

Did the UK always celebrate the Queen’s reign?

Historian Sir David Cannadine describes royal pageantry as an “invented tradition” which was strategically created by the British establishment to give the royal family “new things to do” after the monarchy lost its hard power and was prevented from creating laws and kicking out prime ministers. “New justifications for their continued existence” were required, says sociologist and author Bea Campbell.

Why is there a golden carriage?

That’s part of the magic. Cannadine says all successful royal pageantry has to include “anachronistic modes of transport or dress to enhance its mystery or magic”. The gold Grand State carriage was commissioned in 1760 by King George III and has been used at every monarch’s coronation since 1762. Even at the time it was expensive, costing £7,562 or about £1.6 million ($2.8 million) in 2022’s money. 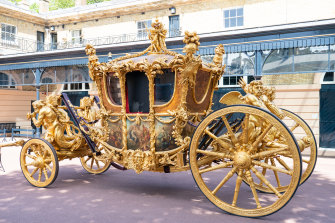 The gold State Coach has been used by Britain’s monarchs for more than two centuries for grand pageants. Credit:Getty

Who’s making the most money?

It’s hard to say for sure, but commemorative pottery makers are likely near the top of the list. The Coronation of George VI and Elizabeth in 1937 created such a massive outpouring of royal commemorative pottery that the government imposed a 100 per cent import duty on foreign, imported souvenirs to keep the profits in the country. As Cannadine writes, “new, consumer oriented firms such as Rowntree, Cadbury and Oxo exploited royal events to help their advertising campaigns”. The same is certainly true for the Platinum Jubilee of 2022, with £48,000 hotel rooms and tea for corgis on offer this week. 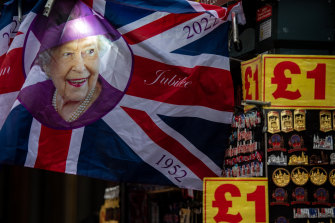