‘Human beings have a huge propensity for good, but can fall victim to tribalism’: The Queen urges unity in Christmas speech – as she jokes of ‘a busy year with two babies, two weddings and a child on the way’

The Queen has used her Christmas message to urge a nation divided by Brexit to reconcile, but also added a personal touch by admitting it has been a ‘busy year’ for her and her family.

Sitting at her desk in the White Drawing Room at Buckingham Palace, the Queen reflected on a year which has seen two of her grandchildren – Prince Harry and Princess Eugenie – get married, and two others – Prince William and Zara Tindall – welcome new babies.

Prince Harry is also expecting his first child with Meghan Markle next Spring, and the Queen joked that her role as a grandmother and great-grandmother kept her ‘well occupied’ throughout 2018.

As head of state, the Queen remains publicly neutral when it comes to political matters and does not express her views on issues. 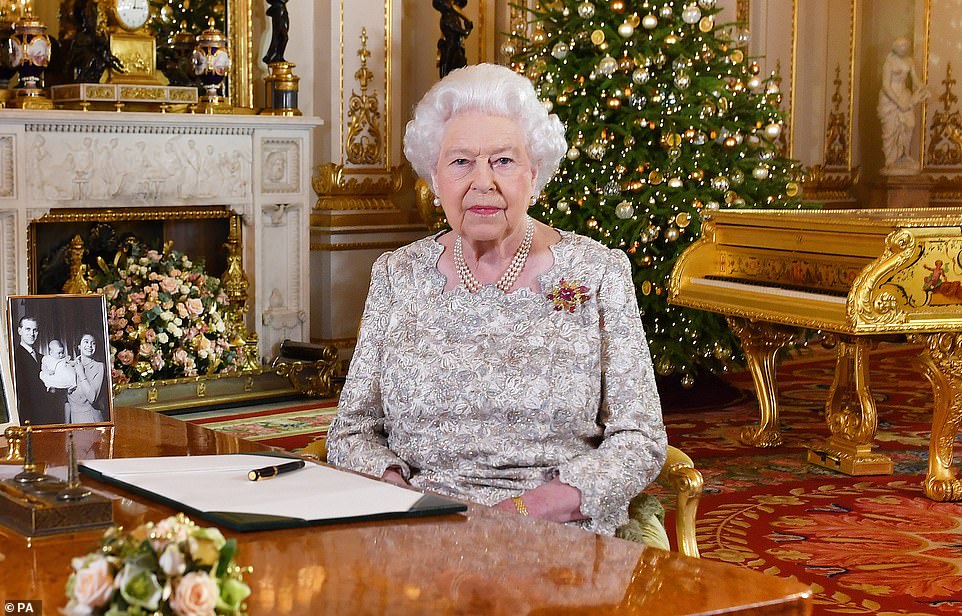 The Queen gave her Christmas Day message, in which she preached a message of conciliation to the nation, in the White Drawing Room of Buckingham Palace

But the 92-year-old Monarch appeared to strongly allude to the tense and bitter political atmosphere that surrounds contentious issues such as Brexit, by urging that ‘even with the most deeply held differences, treating the other person with respect and as a fellow human being is always a good first step towards greater understanding’.

Speaking about the birth of Jesus and the Christmas story, she said: ‘I believe his message of peace on Earth and goodwill to all is never out of date. It can be heeded by everyone; it’s needed as much as ever.’

She also highlighted the darker side of life, how religious faith, which can lead people to do good in the service of others, can also bitterly divide them.

She said: ‘Some cultures believe a long life brings wisdom. I’d like to think so.

‘Perhaps part of that wisdom is to recognise some of life’s baffling paradoxes, such as the way human beings have a huge propensity for good, and yet a capacity for evil.

‘Even the power of faith, which frequently inspires great generosity and self-sacrifice, can fall victim to tribalism.’