The veteran politician, who leaving his post after five years, showed that nerves are still raw between the two administrations following the controversial termination of a $90 billion submarine contract. 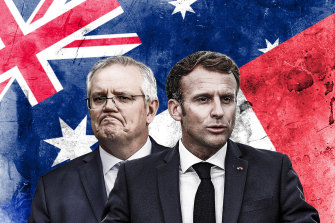 French officials expressed fury over Morrison’s decision to leak a private text message from President Emmanuel Macron after the submarine contract was axed in favour of a new deal negotiated in secret with the US and Britain.

The alliance, known as AUKUS, granted Australia the technology to build nuclear-powered submarines in what was widely viewed as a new effort to counter China’s influence in the contested South China Sea.

France was outraged that it was only informed of the alliance hours before the public announcement was made.

“I can’t stop myself from saying that the defeat of Morrison suits me very well,” Le Drian told reporters on Sunday morning AEST, as he handed over to his successor Catherine Colonna.

“The actions taken at the moment when they were taken were of such brutality and cynicism and I would even be tempted to say of unequivocal incompetence.

“I hope we can resume frank and constructive dialogue with Australia in the future.”

Le Drian and the French ambassador to Canberra both described the submarine decision as a “stab in the back”, saying breaking the deal would hurt French business and shut the country’s military out of a key initiative as Western countries sought to build a bulwark against China.

Macron said at the Glasgow climate summit that Morrison had lied to him.

France recalled its ambassadors to the US and Australia for consultations as part of a protest against the security deal – a move Le Drian at the time said was justified by the situation’s “exceptional gravity”.

It will now be up to career diplomat Catherine Colonna, who replaces Le Drian, to help reset the relationship with her counterpart, Labor’s Penny Wong.

Until last week, Colonna served as the French ambassador to the UK and was at the heart of managing difficult post-Brexit relations between London and Paris. Last year she was summoned by British Foreign Secretary Liz Truss to explain French threats to increase border checks during a dispute over fishing licenses.

However, Albanese last week accused Morrison of breaking trust with the Biden administration by not briefing Labor well before the announcement.

This masthead revealed that senior members of the Biden administration had insisted four months before the announcement that it would only consider pursuing the project if it had solid support from both major Australian political parties.

“Our countries have a long history and a bright future together. As thriving like-minded democracies we work every day to make the world a better, safer, greener and more prosperous place,” he said.

“As we reap the rewards of our comprehensive free trade agreement, the AUKUS partnership and the unmatched closeness between the British and Australian people, we do so knowing that the only distance between us is geographical.”

Johnson said he looked forward to working with Albanese in the “weeks, months and years ahead” as the two nations tackled shared challenges and demonstrated the importance of shared values.

Indian Prime Minister Narendra Modi also wished Albanese well ahead of the first meeting between the two leaders in Tokyo on May 24 during a summit of the Quad group that also includes Japan and the US.

Modi said he looked forward to further strengthening our the comprehensive strategic partnership between the two nations as well as “shared priorities in the Indo-Pacific region,” he wrote on Twitter.