Florence, Italy: Just Google "10 greatest geniuses of all times", and it is highly likely that two of the names on that list will be Leonardo da Vinci and Galileo Galilei.

Now, think about what you would do if you were put in charge of bringing their legacy into the 21st century, in all its complexity, as neither man can be reduced to one simple label, say "artist" or "astronomer". Both were proverbial, intellectually omnivorous Renaissance men. 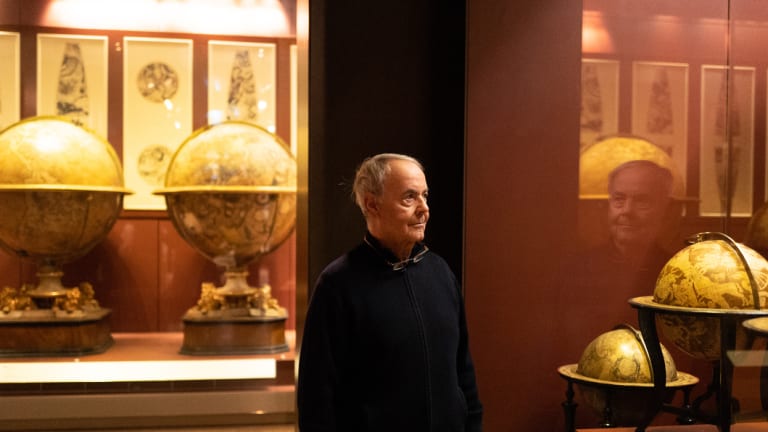 But that is the life's work of Paolo Galluzzi, the longtime director of Florence's Museo Galileo and former director of the Biblioteca Leonardiana, the research centre dedicated to things Leonardo, who has successfully masterminded the conversion of the two analogue geniuses into the digital age.

Even though Galluzzi, 76, has considerable hands-on experience tinkering with Leonardo and Galileo's manifold machines and instruments – from reconstructions of Leonardo's mechanical contraptions to Galileo's real-life telescopes housed in the museum's collection – one of his greatest achievements has been to cement their presence online.

For the past two years, Galileo scholars and aficionados have been able to access all of the Tuscan prodigy's manuscripts and the principal related scholarship through the search engine Galileo//[email protected], a project developed through the museum. "It lets you find in seconds things that would take months to find by hand," he said proudly. A similar search engine, Leonardo//[email protected], is in the works for the other Tuscan genius and is expected to be in operation next northern spring. 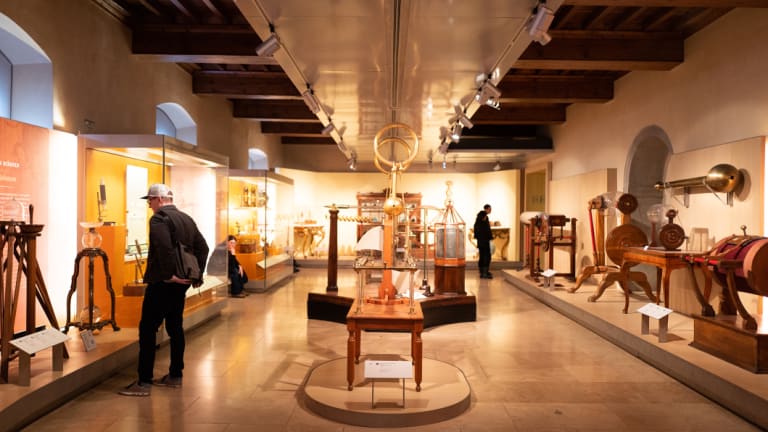 The two search engines will exponentially magnify the global reach of both Galileo and Leonardo, embodying one of Galluzzi's driving aims: to widen access to knowledge.

"This is a patrimony that should be universally available," he said.

When he was hired in 1982 as director of what was then known as the Institute and Museum of the History of Science, he inherited a staff of one and headquarters that occupied just one floor of the 11th-century Palazzo Castellani, adjacent to the Uffizi gallery, one of Italy's top tourist draws. By contrast, tourists merely trickled into the science museum.

Today, the Galileo Museum, as it was renamed after a 2010 restoration, has doubled its floor space, draws around 300,000 visitors a year and produces specialised multimedia exhibitions that tour the world.

For Galluzzi, the dawn of the internet age brought an epiphany of sorts. "Compared to the Uffizi, this little institution just couldn't compete," he said in his wood-panelled office. "But I had the impression that using these novel instruments, it was possible to create a new playing field in which we could grow." 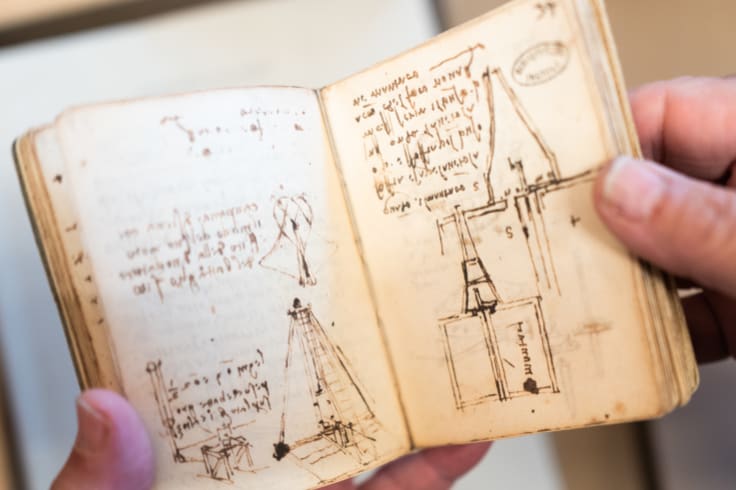 Paolo Galluzzi shows a reproduction of Leonardo’s notebook. One of his great achievements has been to give the two great thinkers’ documents a home online.Credit:New York Times

Back in the 1990s he embraced what were then unfamiliar technologies with gusto (and not without some mishaps, he acknowledged, recalling the unreliability of the earliest data storage systems). The museum was the first in Italy to have its own website, in early 1995, "and not just a home page, there were contents, too". Today, it has more online viewers than the Uffizi, he boasts.

"It's certainly unique in Italy, and rare elsewhere, for a museum to have such a powerful digital presence," he said. 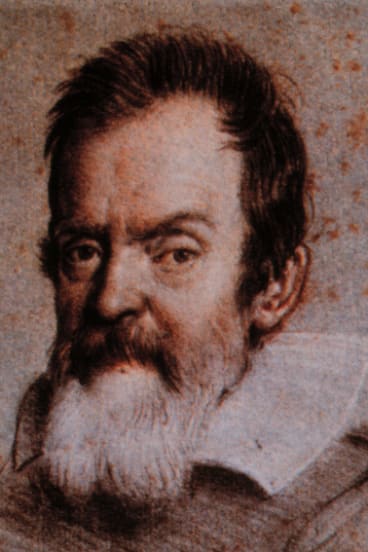 Galileo Galilei first spotted Mars with a primitive telescope in 1609.

It strives to remain current. The catalogue can be downloaded in PDF format, and the museum can be "visited" by Google Street View, while an online virtual tour includes detailed descriptions of some 1000 instruments. The mobile phone app does much the same, with the addition of videos on how things work.

A significant number of the books in the institute's library, one of the best in Europe on the history of science, are also available online, including most of the rare volumes and manuscripts on the early modern history of science and technology.

In many ways, Galluzzi and the museum were travelling in two orbits destined to cross.

After high school studies in the humanities, he studied philosophy at the University of Florence under Renaissance scholar Eugenio Garin, obtaining a degree in the history of philosophy. He was one of the first students in Italy to specialise in the history of science, a discipline that had not been formally recognised at the time. His passion for Galileo dates back to that period. 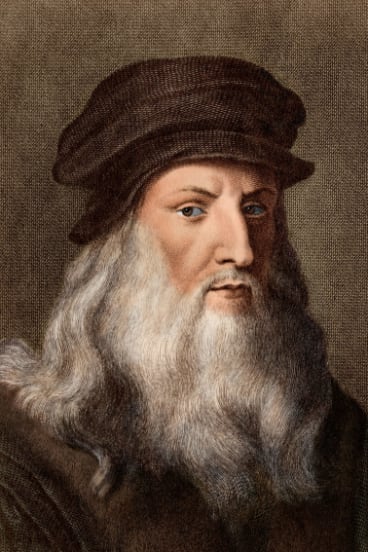 A portrait of Leonardo da Vinci, the archetypal Renaissance man.Credit:Alamy

"I received my degree in 1968, the years of student unrest, and Galileo was seen as a hero because of his battle for the autonomy of reason from the control of the Church," he said.

His decades-old fascination with Leonardo, on the other hand, was a matter of "fate", he said. After college, he was hired as director of the Biblioteca Leonardiana in Vinci, the artist's hometown.

"If I hadn't gotten the job, I probably would never have become a Leonardo scholar," he said. "Maybe I would have studied Newton, or some other thinker."

It worked out well in the end. "Leonardo is a prey that's hard to capture, but then he fascinates you and completely engages you," he said.

Even as he navigated the Leonardo museum into a new era, he embarked on an academic career, teaching the history of science first at the University of Siena, then the University of Florence, interspersed with many short-term appointments at a number of universities.

Under his guidance, the museum embarked on a new venture, pioneering the era of multimedia, interactive exhibits. Leonardo's intricate musings on a host of contraptions were a good fit for this burgeoning project, and his sketches and drawings were brought to life on computer screens to show how they operated.

The museum's growing reputation began attracting young engineers. Currently, it invests a third of its budget, and a third of its staff, to information technology. One staff member's sole task is guaranteeing long-term digital preservation, keeping up-to-date with new systems and moving data to new platforms when necessary. 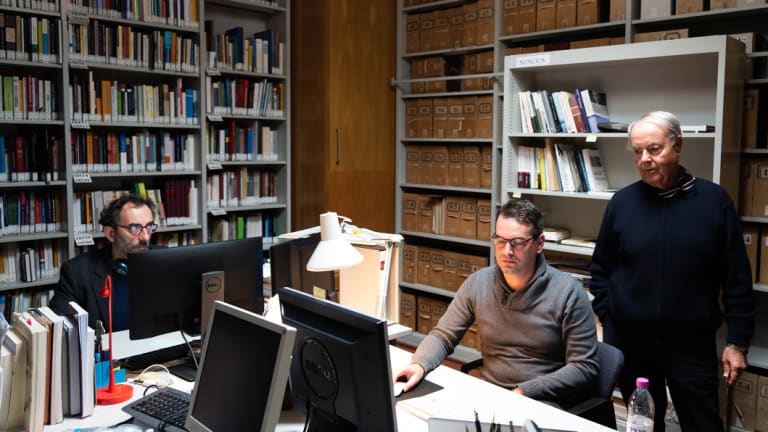 "We want to ensure that our archives will be accessible in 300 years," Galluzzi said. "At first we thought that digital would last forever, but it turns out it's much less durable than a book, which can last centuries," he said, adding with a laugh: "Not to mention stone inscriptions."

From the start, the multimedia exhibits were crowd pleasers. "Engineers of the Renaissance" toured the world's major cities, while one Leonardo show in Tokyo drew around 1 million people in three months, he said.

For a man who preaches the digital gospel, he still pens his scholarly writings by hand, he said, a self-described "hyper-corrective" with an old-school approach to writing. Typing got in the way of reflection and meditation, he said. "One of my privileges is that I have secretaries who type up my handwritten notes," he said, smiling.

After 36 years at the helm of the museum, Galluzzi is thinking about retirement. "I want to leave when I am still of sound mind and body," to pursue independent research and study, he joked.

He serves on many committees, advisory boards and scientific commissions. But his true legacy is that of Leonardo and Galileo. "We are meteors that leave no trace," he said, adding after a beat: "Unless you become Leonardo or Galileo."