LINDENOW, Australia — Along the crest of a ridge overlooking the wide Mitchell River valley in East Gippsland, Victoria, there’s a small town. It’s like many communities in this part of the world: a handful of houses, a general store, a pub and more than a few empty storefronts. But the view from that ridge — a panorama of produce fields stretching off into the green distance — is breathtaking.

Lindenow is also home to a restaurant called the Long Paddock, which has caught the attention of food enthusiasts and journalists from Melbourne (a three-and-a-half-hour drive west). It is no longer surprising to find very good food in the small towns of Australia, as enterprising young chefs escape the cities for lower rents and more direct access to ingredients, but to find the Long Paddock in a town as tiny as Lindenow is unusual. To me, it borders on shocking.

I was born in East Gippsland, in a town called Club Terrace, which lies a farther three-hour drive into the increasingly wild countryside that eventually becomes temperate rain forest. Even when espresso machines began popping up in seaside cafes along Victoria’s coastline, when tourism and upscale restaurants moved into the old gold-mining towns, Gippsland remained primarily a farming and logging community.

Like much of regional Australia, Gippsland is a place where people are intensely practical, where nothing is easily discarded and where preserving and using every last scrap of food (and water) are still the way of life. Like the rest of the country, Gippsland is increasingly looking to tourism to bolster its economy. And as elsewhere, this creates an interesting friction: How do you deliver the amenities that tourists crave while retaining the character of the place?

The Long Paddock provides a lovely example of how to do it right. I’d wager that example hinges heavily on the restaurant’s local roots.

Tanya Bertino, half of the husband-and-wife team who own and operate the Long Paddock, grew up on a local farm. She moved to Melbourne for university and eventually developed an international cooking career, working for Michelin-starred chefs in London and highly regarded restaurants in Melbourne. Her husband, Anton Eisenmenger, grew up in Queensland, and the two met while apprenticing in a Melbourne kitchen. They lost touch, reconnected and eventually became partners in life and business. In 2016, they returned to Ms. Bertino’s hometown to open the Long Paddock. 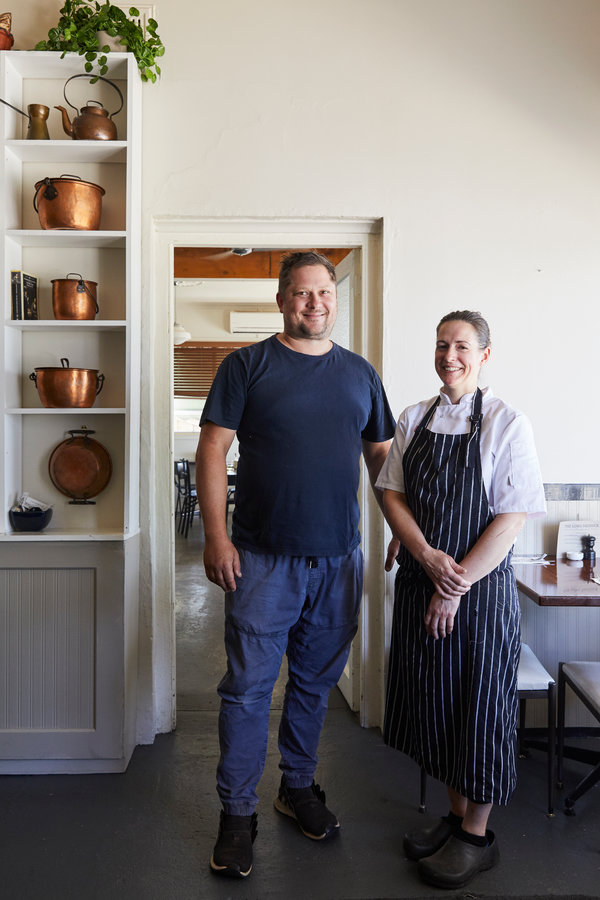 [Don’t miss Besha Rodell’s next column. Sign up for the weekly Australia Letter for the best of our local and global coverage.]

Their restaurant resides in a former bakery on Lindenow’s sleepy main street, and acts most of the time as a breakfast-and-lunch cafe. In the mornings, there is often a line out the door of tradesmen in their signature fluorescent vests and elastic-sided work boots, waiting to order an espresso drink from the counter.

The dining room is homey but not cutesy: The old wooden floorboards support mismatched tables and chairs, and bookcases full of cookbooks and plants. The back room leads to a bathroom that still has floral wallpaper from the middle of the last century, plus the vinyl-covered chairs to go with it.

Food is served on thrift-store china that doesn’t feel overly curated or precious. Out the front windows you can see that incredible valley vista.

The ingredients listed on the menu tell a homegrown story: There’s a tart made with Gippsland Buffalo Blue cheese, spring onions, chard (known in Australia as silverbeet) and soft herbs, with a crust thick with local butter. The fish crudo is cut from King Dory from nearby (by Gippsland standards) Lakes Entrance, and served with sea succulents, horseradish cream and shallot. Old-fashioned breakfasts, like black pudding with eggs, come with local asparagus in the summer, and local greens in the winter.

The open kitchen is fronted by a glass pastry case containing some of the Long Paddock’s greatest gifts, in the form of pies and tarts and cakes. The summer fruit grown in the area has been put to wonderful use over these past few months — the apricots used to fill a buttery tart shell, then showered in slivered almonds; the plums paired with hazelnuts in a bright, jammy torte.

On Saturday nights the restaurant opens for dinner, and offers a five-course tasting menu for $65 a person. It’s a lovely way to spend an evening, the convivial room filled with a mix of locals and travelers, all enjoying dishes like silky cannelloni stuffed with rich duck meat and topped with local oyster mushrooms. Beverage pairings showcase the burgeoning wine industry in the region.

I’ve had other meals in Gippsland that signal change, hinting that the creep of gourmet aspirations will eventually infiltrate every last one of even the teeniest towns. At a restaurant called Sardine, in Paynesville, about 30 minutes south of Lindenow, I ate some of the most elegant and delicious meals I’ve had in recent months, cooked by a chef trained in Melbourne’s top kitchens.

In Warragul, a little over an hour from central Melbourne, I ate a wonderful meaty lunch at Hogget, a slick restaurant that looks out over rolling vineyards. But a family member who lives in Warragul voiced a concern about Hogget that I share.

“It’s as if they’re trying to bring everything good about Melbourne dining to the country,” she said, “rather than incorporating the wonderful things about the country into their restaurant.”

Sardine and Hogget are both very good, and excel at using the hyper-regional ingredients available to them. But they do feel like city restaurants plopped into country settings. If I woke up in the Long Paddock after a decades-long coma and looked around, I’d easily guess I was in Gippsland.

Ms. Bertino and Mr. Eisenmenger have styled their restaurant to mirror the community they serve, taking into consideration the needs of a small town as well as highlighting the products of that community. The Long Paddock’s greatest achievement is how true it stays to its location. The friendly service, the worn floorboards and thrift-store china and old fashioned desserts — it feels like home.

Do you have a suggestion for Besha Rodell? The New York Times’s Australia bureauwould love to hear from you: [email protected], or join the discussion in the NYT Australia Facebook group. Read about the Australia Fare column here.