London: Mathias Cormann never worked with John Howard: the former prime minister was swept from Parliament at the same 2007 election which pushed the Belgium-born migrant into it.

However Howard’s maxim that politics is governed by “the iron laws of arithmetic” would have been bouncing around inside Cormann’s head lately because arithmetic posed the biggest threat to becoming next secretary-general of the Organisation for Economic Co-Operation and Development.

The Paris-based club of rich nations has 37 members and a majority — 22 — belong to the European Union which desperately wanted the influential job for one of its own. Had European solidarity held, Australia’s longest-serving finance minister would have been denied the post. But it didn’t: the 50-year-old broke the bloc apart to turn the arithmetic in his favour. 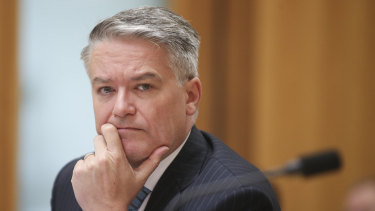 Mathias Cormann sealed an against-the-odds victory to become the next secretary-general of the OECD.Credit:Alex Ellinghausen

For Cormann, victory meant bagging the magic number of at least 19 votes during last Friday’s final round of voting. How he did it is a case study in the dark arts of diplomacy and power of personal relationships.

The genesis for Cormann’s win was towards the end of 2019, when Cormann privately informed Prime Minister Scott Morrison that he would not recontest the next election and would probably leave the Senate mid-term. The pair spoke again in May 2020, when Morrison floated the idea of Cormann running for the OECD. Cormann was keen to get out of politics so initially turned Morrison down but later reconsidered.

By the time a public announcement was made in October a taskforce had already been assembled inside the Department of Foreign Affairs and Trade. The team of 8.5 full-time equivalent staffers led by senior official Helen Stylianou developed a matrix which examined the policy issues most important to each OECD country, and which Australian government minister might have the best success in lobbying for support. 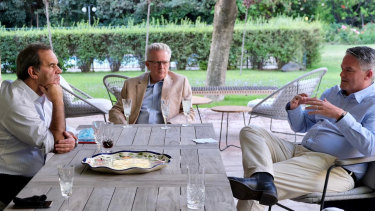 Rallying the OECD’s non-European membership meant Cormann entered the final round with the backing of Australia, New Zealand, South Korea, Japan, Chile, Colombia, Israel, United States and probably Canada. Locking them up was never guaranteed — many were under pressure to let the post return to a European for the first time in 25 years.

With those nine votes in the bag, Cormann needed at least another 10 from Europe. Australia’s lobbying blitz is thought to have peeled away Belgium, Germany, Greece, Hungary, Ireland, the Netherlands, Poland, the Slovak Republic and Slovenia. It may have also won over France, Latvia, Lithuania and even Austria. The United Kingdom’s vote had already been safely locked up by high commissioner George Brandis last year.

Morrison made 55 phone calls to 30 world leaders to help get the votes, and also exploited his regular virtual meetings with the so-called First Movers coronavirus group. Morrison would home in on Cormann’s work ethic and performance as the government’s leader in the Senate — a job which required negotiation to get bills passed. These skills would be perfect for the OECD’s consensus-style of operation, Morrison told them.

One person familiar with Morrison’s calls said the Prime Minister made several important interventions with some leaders in the final fortnight of the contest. Morrison and Cormann have not said what if any trade-offs Australia pledged to secure support.

When some leaders told Morrison they could not support Cormann, the DFAT taskforce went back to the drawing board to work out what could be done to win that country over — a tactic which was successful a couple of times.

No diplomatic lever was left untouched. The political blitz was complemented by Australian ambassadors and high commissioners based in OECD member countries, and lobbying of ambassadors based in Canberra. 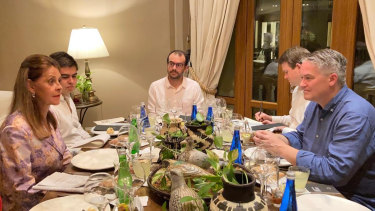 Mathias Cormann at dinner in Bogotá with the Colombian Vice-President Marta Lucia Ramirez.Credit:

Wherever Cormann went he carried a bundle of testimonials, including a letter from Opposition Leader Anthony Albanese. Albanese wrote that Cormann had earned the respect “not only of those who share his political views but also those who don’t”. “Mathias is a skilled negotiator with the ability to effectively engage across the political spectrum,” the Labor leader said.

On the prospect of a Cormann win, Albanese wrote: “Australians would regard this as an achievement not just for Mathias but a proud recognition of our nation.”

Albanese and Labor’s foreign affairs spokeswoman Penny Wong resisted pressure from some MPs to withdraw the opposition’s support after The Sydney Morning Herald and The Age reported in November that the government gave Cormann the RAAF jet to conduct his lobbying blitz through coronavirus-ravaged Europe.

Cormann regularly sought counsel from Ben Morton, the West Australian federal MP who is a friend and influential Morrison confidant.

Another crucial figure was Alexander Robson, Australia’s ambassador to the OECD. Robson pushed Australia’s case among fellow ambassadors in Paris and would regularly relay the information to DFAT and Cormann. It was lost on nobody that Robson was once the senior economics adviser to former prime minister Malcolm Turnbull, who has loathed Cormann since the 2018 leadership implosion in Canberra.

“But Alexander was completely brilliant and a total professional,” one official said. Cormann stayed with Robson in Paris during his trip in January and February.

Turnbull and Cormann enjoyed an extremely close working relationship between 2015 and 2018 but Turnbull later concluded that his finance minister had long been aware of Home Affairs Minister Peter Dutton’s intention to challenge for the Liberal leadership.

In a text sent to Turnbull after his demise, Cormann denied he had been part of any conspiracy. Turnbull replied: “Mathias, at a time when strength and loyalty were called for, you were weak and treacherous.” 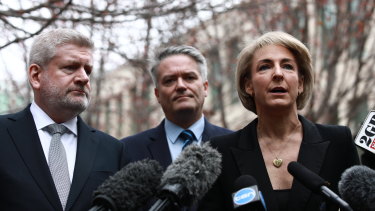 Cormann and his campaign team were therefore not surprised to learn earlier this year that Turnbull had launched an attempt to kneecap his former ally’s OECD bid.

Sources claimed Turnbull contacted German Chancellor Angela Merkel, French President Emmanuel Macron and Kurt Campbell, a former Biden-era official who Biden tapped to be his Asia tsar. Accounts of these conversations made it back to Canberra and angered even some of Turnbull’s own allies who felt it undermined the “Team Australia” spirit of the bid.

“Malcolm was trying hard but it didn’t work,” one official said. Turnbull declined to comment.

In any event, Cormann’s domestic political history did little to dent his image overseas; OECD members were more interested in his vision than they were in his past skirmishes at Parliament House in Canberra. Cormann will take up his post in Paris on June 1 and be joined by his wife and two daughters Isabelle and Charlotte later this year.