London: In recent days, negotiators have seemed tantalisingly close to striking a post-Brexit trade deal between Britain and the European Union. But time is running out, with less than two weeks until the December 31 deadline when Britain withdraws from the EU's economic zone, the single market and customs union.

That could mean heavy new taxes on traded goods, gridlocked ports and some types of food disappearing from British supermarket shelves, as well as conflict over fishing rights.

The trading arrangement between the two sides would default to World Trade Organisation rules, and deliver a huge hit to businesses on both sides of the English Channel, but particularly in Britain. Here's why the negotiators talk about a "moment of truth" in the efforts to avoid a chaotic final chapter to the Brexit saga. 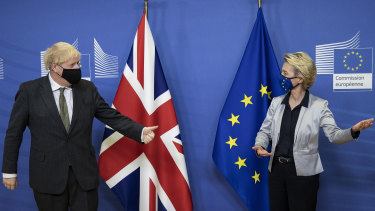 British PM Boris Johnson and European Commission President Ursula von der Leyen have not been able to agree on a Brexit deal. Credit:AP

A: Quite bad. Britain has spent decades integrating its economy with continental Europe and companies import and export goods freely without paying tariffs. That would change if a trade deal was not reached, with tariffs applied to a range of goods crossing the border. Cars, for example, would attract tariffs of 10 per cent. Farmers could be hit, too. The average tariff on lamb meat is 48 per cent — threatening some exporters with ruin, and dairy items would be subject to tariffs of about 35 per cent .

The other big risk is of extra bureaucracy clogging ports. Some of this is inevitable on January 1 — with or without a trade deal — because traders will now have to complete millions of customs declarations. But "no deal" would make this worse if ports jam on one side of the English Channel and trucks get stranded on both. Under what the government calls a "reasonable worst-case scenario," up to 7,000 vehicles could stack up on the motorways with delays of up to two days. In Kent, in southern England, an 11-hectare site is being built to handle idling trucks. 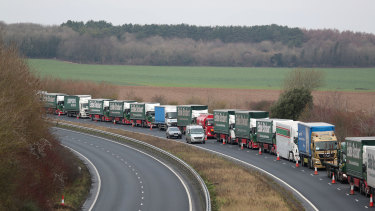 days-long queues are expected at ports if there is no deal. Credit:AP

Q: OK, so it's bad news if you are a farmer, automaker or truck driver, but what about other people?

A: About a quarter of all food eaten in Britain is produced in the European Union and disruption would come at in winter when fruit and vegetable imports are high. Food prices would likely rise, and one supermarket chain has estimated that tariffs could increase overall British food bills by up to 5 per cent.

Q:Surely all this would hurt the Europeans, too?

A: That's correct, and Britain would raise money in tariffs because it imports more goods than it exports to the EU. The problem is that the EU is Britain's biggest trade partner and accounts for 43 per cent of its exports. No one single EU nation would be hurt so badly by no deal with the exception of Ireland. One official estimate suggests that the lack of a trade deal would take an extra 2 per cent off Britain's economic output and drive up inflation, unemployment and public borrowing.

Q: Would the planes keep flying?

A: A basic agreement to keep planes flying and the Channel Tunnel train running is likely. The European Commission has announced contingency plans to maintain aviation safety arrangements and to keep road freight and passenger transit links open for six months. This would have to be reciprocal, however, and European road freight rules come with some "fair competition" conditions that Britain might not accept. The EU side has also proposed keeping fishing rights the same for a year, with European boats allowed to keep plying British waters, although Britain has rejected that idea.

Q: Speaking of fishing, what would the situation be there?

A: A big mess. With no agreement in place, French, Dutch and Belgian boats would lose access to British waters, where they have fished for decades (or in some cases centuries). That could lead to confrontations at sea and Britain has put four naval vessels on standby to protect its waters.

Q: Any other problems?

A: Plenty. There would be less cooperation on security and data sharing and Britain would lose its current swift access to European databases on criminal records and fingerprints. Nor would Britain be likely to get much cooperation over the rules under which its financial services industry can trade on the continent. And there would be no prospect of Britons keeping free health care in the EU or enjoying student exchange programs. But the rights of European citizens already in Britain to stay (and vice versa) are guaranteed under a Brexit withdrawal agreement. The agreement also set rules to avoid a hard border in Ireland and Britain has dropped a threat to break parts of this treaty.

Q: Having looked over the no-deal abyss, can negotiators reach an agreement?

A: Though most of the issues have been resolved, there is no certainty that an agreement will be struck before the deadline. But, given the issues at stake, analysts do not see no deal as a durable solution. Britain is the smaller party in this trade negotiation but its economy is large and it is right on the doorstep of the EU. At some point, the two sides will have to reach agreements not just on trade but on everything from fisheries to financial services. The question is whether this happens before or after a New Year Brexit crisis.