HAMBURG (Reuters) – Germany’s Christian Democrats said a big thank you on Friday to Angela Merkel, their leader for the past 18 years, with warm words and long applause, and presenting her with a conductor’s baton as they elected her protege to succeed her. 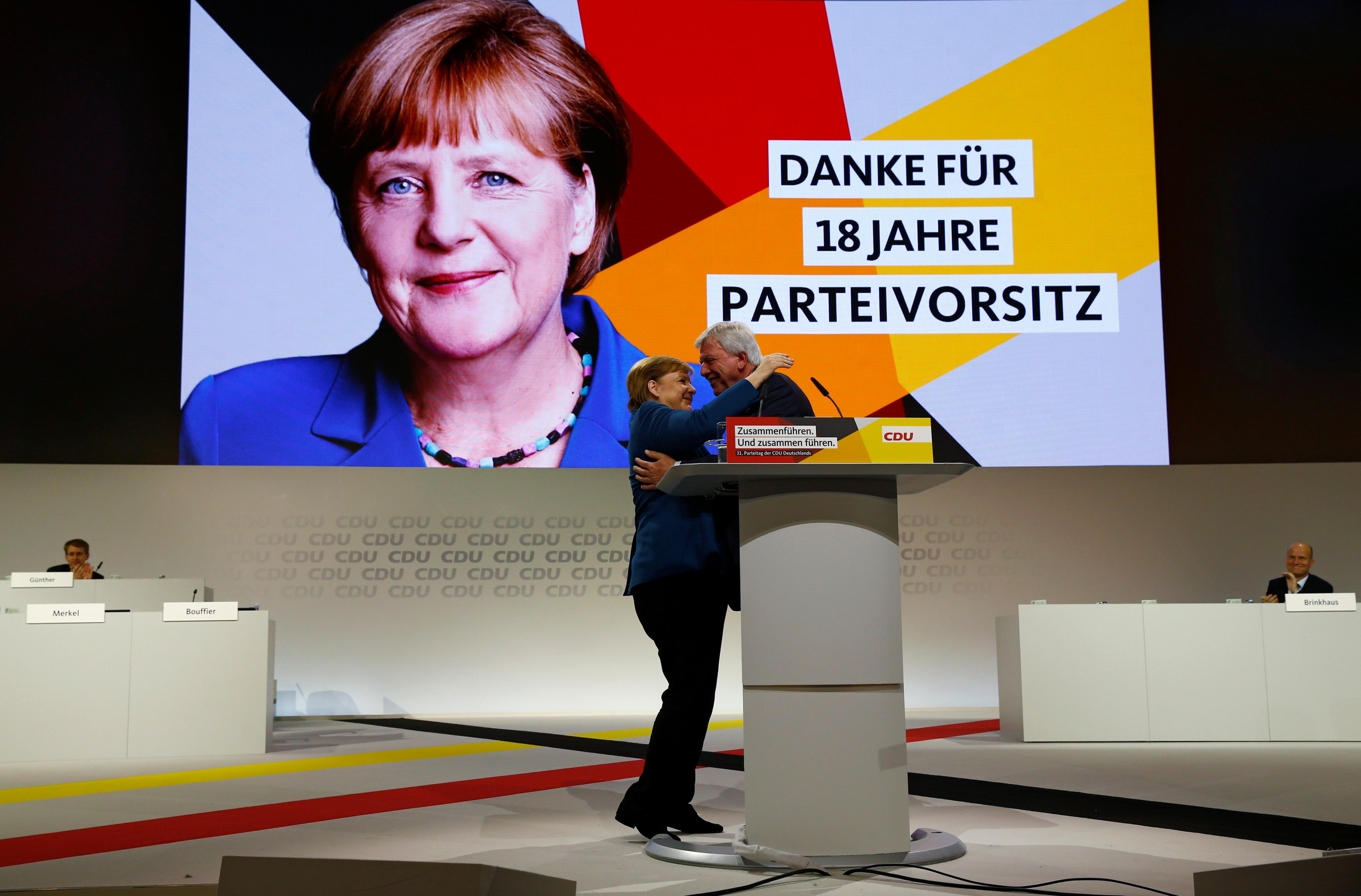 Merkel, a Lutheran woman who grew up in the former Communist East where she moved when she was an infant, has always been something of an outsider in the male-dominated, Catholic party.

But her record of winning four elections can not be denied and was not lost on CDU members.

Waving orange cards with the slogan “Thank you boss”, delegates cheered as Merkel, 64, walked onto the stage at the conference center in Hamburg, her birthplace, to end an era for the party.

“We have had very successful years with Angela Merkel. She has led us for many years in government and that is the goal of a party,” said Julia Kloeckner, a deputy party leader.

“We need you as chancellor,” Kloeckner told the conference.

As chancellor of Europe’s biggest economy since 2005, Merkel has been the most influential leader in the European Union through the euro zone and migrant crises. Forbes magazine has repeatedly named her the world’s most powerful woman.

She plans to stay on as chancellor until the next federal election, due by October 2021. The choice of Annegret Kramp-Karrenbauer, dubbed mini-Merkel, as her successor makes that a likely scenario.

“Merkel does not show much emotion herself but above all we respect her and want to show gratitude to her,” said Tobias Loose, a delegate from the northern state of Schleswig Holstein.

“I expect her to remain chancellor and even see her become a bigger star, especially internationally, as she sounds freer to say what she wants,” he added.

All the same, Merkel, a physicist, was fighting back tears when she gave a final speech as party leader, drawing a nearly 10 minute standing ovation.

“It has been a great pleasure for me, it has been an honor,” she said, adding it was time for a new chapter.

Her popularity has waned since her 2015 open-doors migrant policy and the CDU has suffered heavy electoral losses at the state level.

After losing support in the 2017 federal election, she struggled to forge a coalition which has been dogged by rows in the last six months. She announced her decision to stand down as party leader in October.

But Friday was a day to celebrate Merkel’s longevity.

As lines from The Kinks song blared out “Thank you for the days”, Volker Bouffier, premier of the state of the western state of Hesse, introduced a film of Merkel’s best moments.

Showing pictures of her laughing and grimacing, looking stern and having selfies taken with refugees at the height of the 2015 migrant crisis, the film thanked her for her humor, her humanity and character.

Pointing to her stamina and political nouse, Bouffier pointed out that the Hamburg soccer club had been through 24 trainers and her rival Social Democrats 10 chairpeople in the 18 years Merkel had led the CDU. 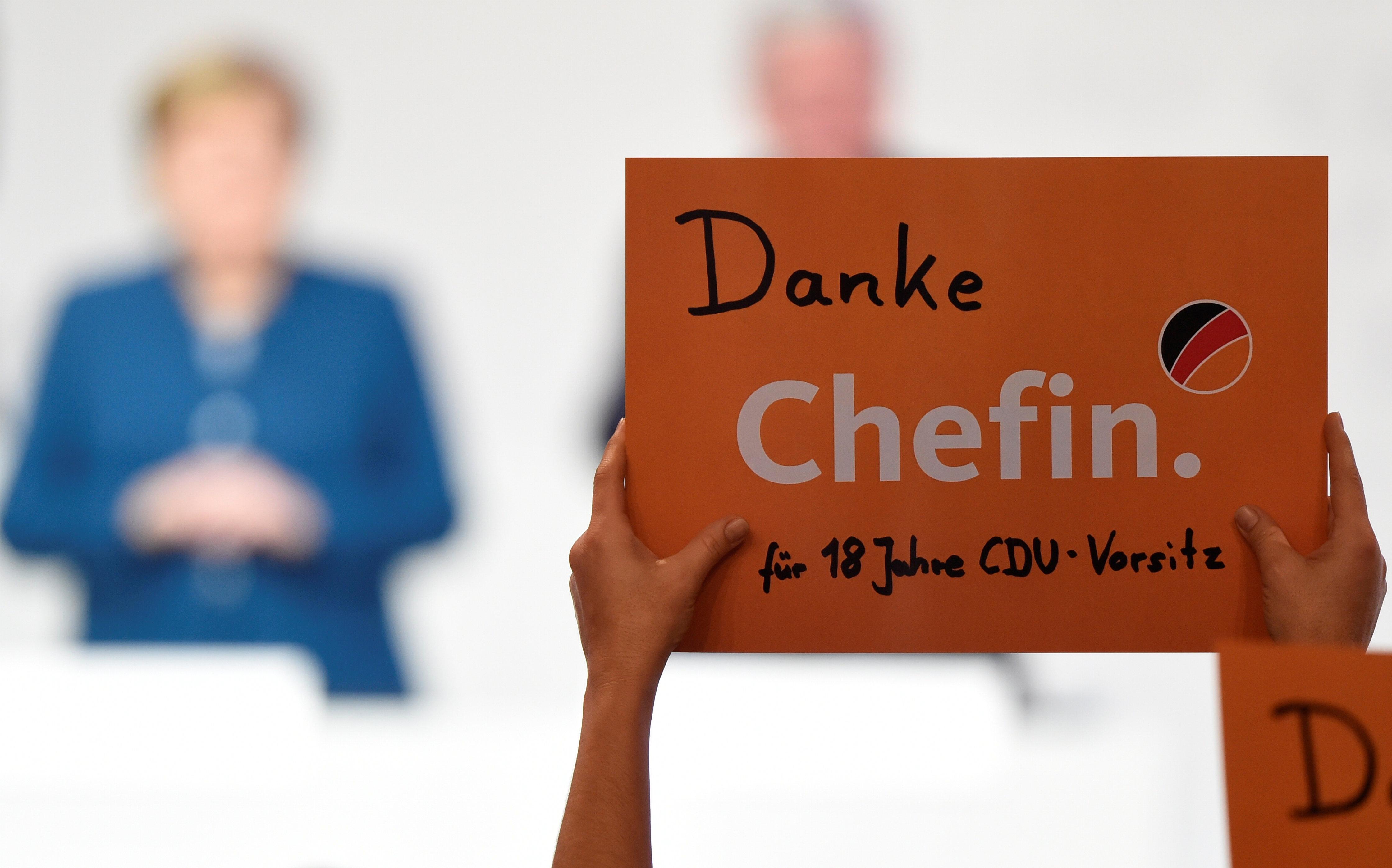 In a personal touch, he gave the music-loving chancellor the baton that Japanese conductor Kent Nagano had used at a concert of Beethoven’s 9th Symphony performed at last year’s Group of 20 summit in Hamburg.

Even Horst Seehofer, the former premier of Bavaria who has been a thorn in her side for years and nearly brought down her coalition in the summer due to a row over migrant policy, found kind words for her:

“She is the best. We will all miss her,” he said. “When you have gone through as much as Angela Merkel and me, you are bound together. There is even affection,” he told Der Spiegel weekly.