Cardboard cutouts of bottles of whiskey are being used on the shelves of a Tesco store after shoplifters kept pinching them.

Staff at the supermarket giant branch have removed the likes of Jack Daniels and replaced them with little cards in plastic boxes.

Shoppers now must take one of them carrying a photo of the whiskey they wish to purchase to the check out.

The different variety bottles of JD with cutouts range from £14 up to £45 each, but all the other bottles of spirits are still on the shelves. 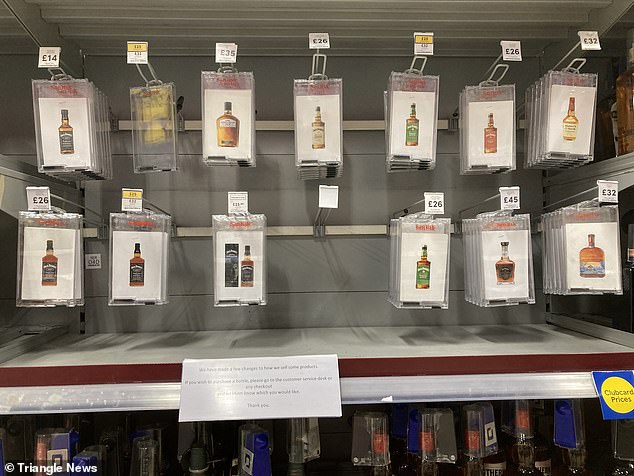 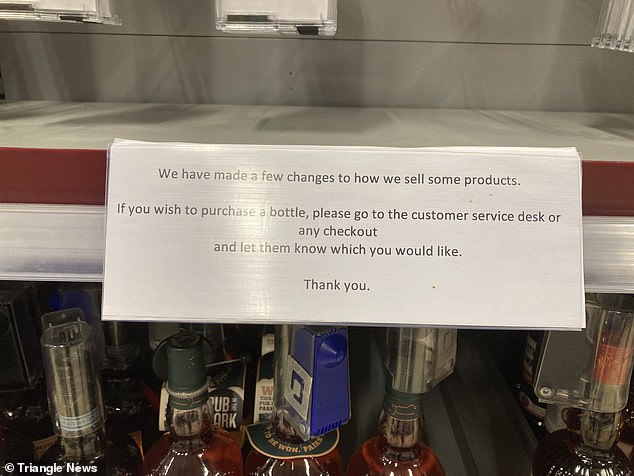 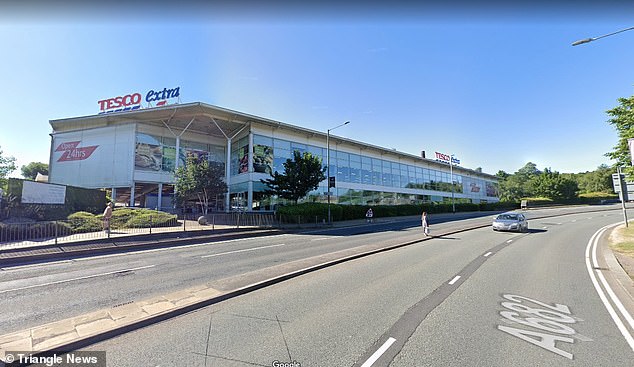 A staff member now stands guard in the booze aisle at the store to watch out for shoplifters.

One customer said: ‘The aisle is full of other spirits but not Jack Daniels.

‘It looks a bit odd seeing photo cards instead of bottles on the shelves.

‘The security guard stands there all day. He looks a bit miserable.

‘I’ve seen bottles with security tags on before, but not photos in plastic boxes.’

A sign on the shelves of the store in Burnley, Lancashire, reads: ‘We have made a few changes to how we sell some products.

‘If you wish to purchase a bottle, please go to the customer services desk or any checkout.

‘And let them know which you would like. Thank you.’ 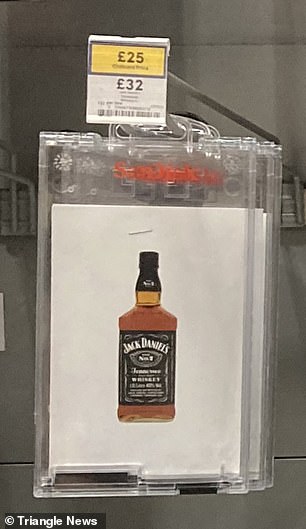 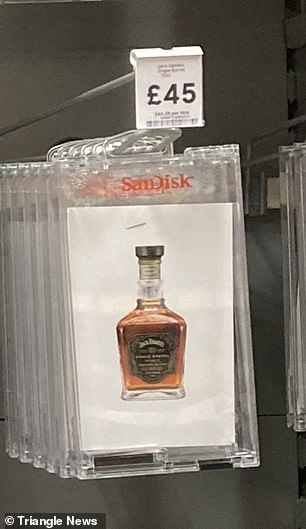 The bottles of whiskey that were being stolen vary in price from £14 to £45, but other spirits are still on the shelves

Last August, the same store took away bottles of posh champagne, including Moet and Bollinger, as criminals were pinching them.

A Tesco spokesperson said: ‘We’ve introduced some extra security measures on a few items at our Burnley Extra store after recent thefts.

‘Customers can simply ask one of our colleagues at the checkout if they want to buy one of those products and they will be happy to retrieve it for them.

‘We’re sorry for any inconvenience.’

As living costs have risen significantly in recent months, so have reported numbers for shoplifting.

Some shops have reintroduced the one-way entry and exit points that were around during Covid to make it easier to track who comes in and out.

Others have beefed up security in terms of personnel and/or CCTV cameras. 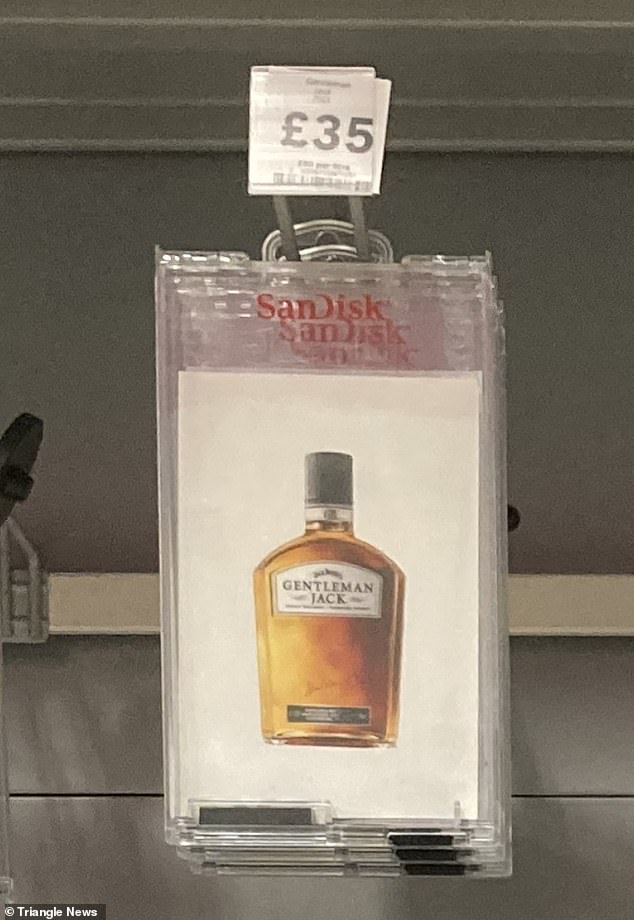 A number of supermarkets have introduced more measures to stop shoplifters, as rising living costs has seen more goods being stolen 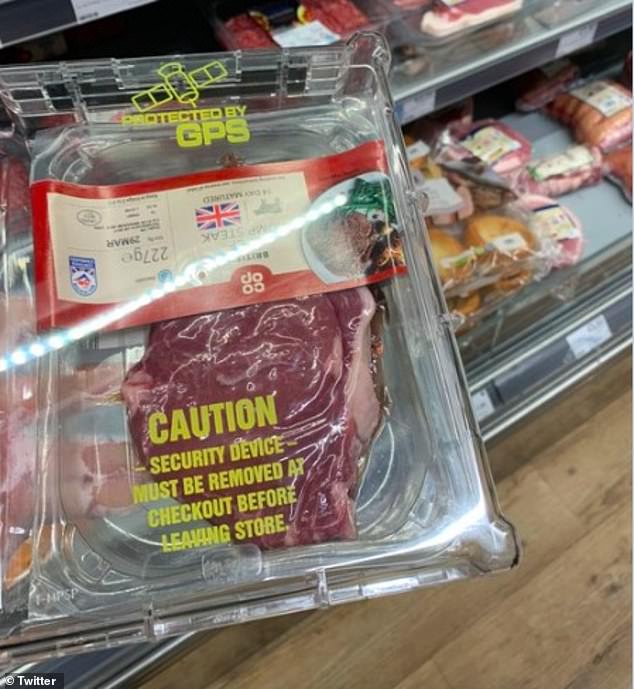 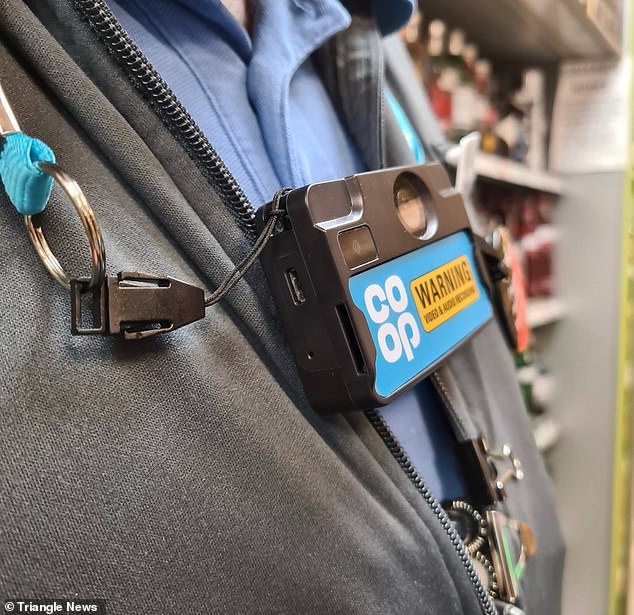 Retail analyst, Bryan Roberts, of Shopfloor Insights said: ‘The situation is definitely getting worse’ and said the crime rate was ‘off the charts’.

While Andy Cooke, a former Merseyside police chief who took over as head of Her Majesty’s Inspectorate of Constabulary in April, said officers should use their ‘discretion’ when deciding whether to prosecute shoplifters amid the crisis.

He told The Guardian that forces across England and Wales were skilled in dealing with the tensions and dynamics of their communities, adding: ‘What they’ve got to bear in mind is what is the best thing for the community, and that individual, in the way they deal with those issues. And I certainly fully support police officers using their discretion – and they need to use discretion more often.’

However Tom Ironside of the British Retail Consortium rejected the idea, saying: ‘It is irresponsible to suggest that shop lifting should not be treated seriously. When confronted, shoplifting often results in violence and abuse against retail staff, many of whom are women, and it costs retailers £2.5billion a year, which includes the cost of the actual theft as well as security measures.’