Teenager is guilty of murdering boy, 17, with Rambo knife in ‘little scrap’ over mobile phone after saying he wanted ‘my first little juice on my blade’

A teenager has been found guilty of murdering a boy who was fatally stabbed with a Rambo-style knife after turning up for a ‘little scrap’ about a mobile phone.

Anas Mezenner, 17, died from a 15cm deep wound to the buttocks following a stand-off between two groups of youths in Haringey, north London, on January 19, the Old Bailey was told.

He had signed up for a ‘little scrap’ over a friend’s missing phone but it escalated as at least three of the opposing group were armed with large knives, jurors heard.

A 17-year-old youth who inflicted the fatal wound had dozens of film clips on his mobile phone of play-fighting and posing with large blades.

While on remand awaiting trial he also let slip in a recorded phone call that he had wanted ‘my first little juice (blood) on my blade’.

During his Old Bailey trial, he admitted stabbing Anas but claimed it was self-defence.

Anas Mezenner had been at home all day when friends called him to help retrieve a missing phone. But as they approached the group just yards from Anas’s home in Haringey, north London, they were attacked with knives in what friends say was a ‘premeditated attack’ 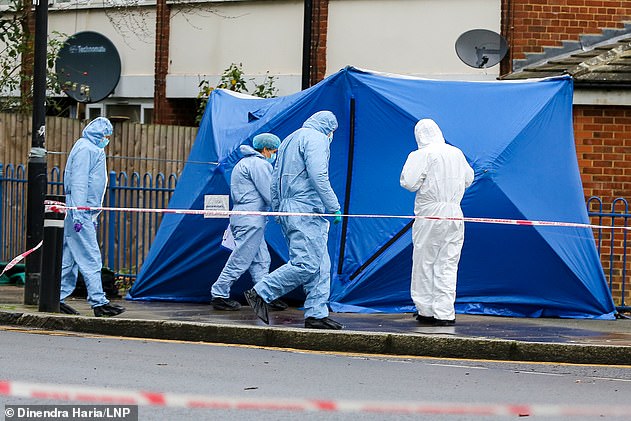 Forensic officers next to a police tent on West Green Road in Haringey, north London in January as police launched a murder investigation

He also indicated where he had stashed the weapon – a large Rambo knife – near bins on a local estate.

Two other 17-year-olds and a boy aged 14, who cannot be named for legal reasons, admitted being nearby when it happened but denied involvement in the pre-arranged meeting.

A jury deliberated for 12 hours to find the teenager who inflicted the fatal blow guilty of murder, while the other two 17-year-old co-defendants were convicted of manslaughter.

The boy wielding the knife was further convicted of wounding with intent against one of Anas’s friends, while a second 17-year-old was convicted of a lesser charge of unlawful wounding of the same boy.

The 14-year-old was acquitted of both murder and manslaughter, and of any attack against the second victim.

Judge Sarah Munro QC adjourned sentencing until September 30 to allow for pre-sentence reports to be prepared.

During the trial, prosecutor Tom Little QC said it was a ‘senseless murder’.

The defendants ‘lived by the knife and they were willing to kill with knives’, he alleged.

Earlier on the day of the stabbing, the 17-year-old with the knife was filmed waving two large knives around in front of the others, jurors were told.

Shortly after 7.30pm, the victim and three friends went to Willow Walk in Haringey where they stayed for several minutes.

They returned to the quiet residential area 90 minutes later and were involved in a ‘stand-off’ with the defendants, who had arrived five minutes before.

Jurors were shown CCTV footage in which it was alleged that words were exchanged before the victim and his friends fled. 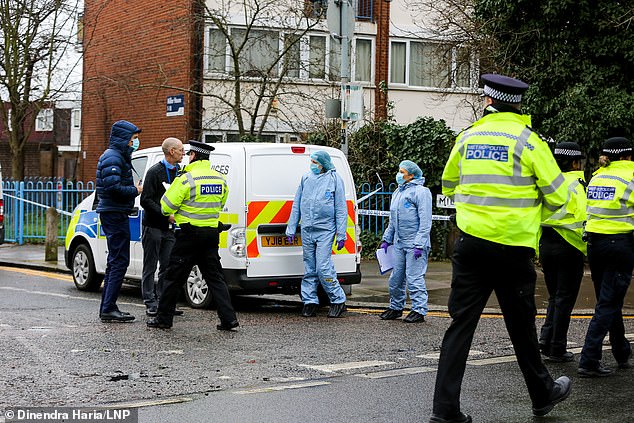 Anas died from a 15cm deep wound to the buttocks following a stand-off between two groups of youths in Haringey, north London, on January 19 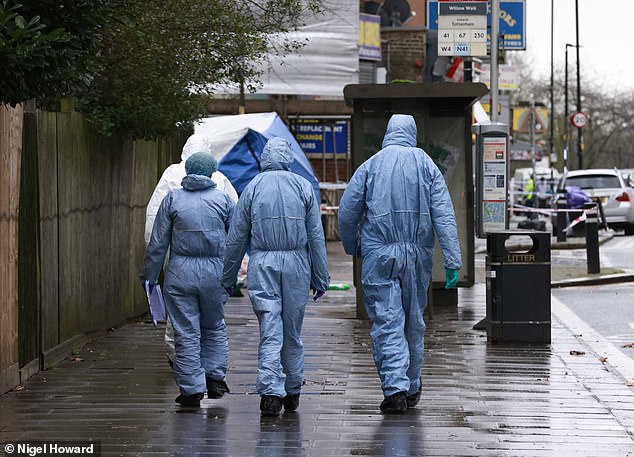 The 17-year-old college student, who volunteered at his local youth club and had dreams of becoming a pilot, was taken to hospital but died in the early hours. Pictured, police at the scene

Shortly after, Anas re-appeared on CCTV touching the area of his buttock where he was stabbed.

Jurors heard he made a 999 call on his mobile phone before he collapsed.

Anas, who volunteered at his local youth club and had dreams of becoming a pilot, was found slumped against railings and taken to hospital but died from his wounds.

A post-mortem examination found Anas died from a 15cm deep stab wound to the left buttock. He also suffered cuts and bruises and two fractured teeth.

The teenager’s grief-stricken family said Anas was ‘very academic at school’, adding he was a ‘respectful quiet and humble boy who did not deserve this.’

Following his death, Anas’s three friends were spoken to by police.

Mr Little rejected a claim they had been in Willow Walk to record a video as ‘plainly not correct’. 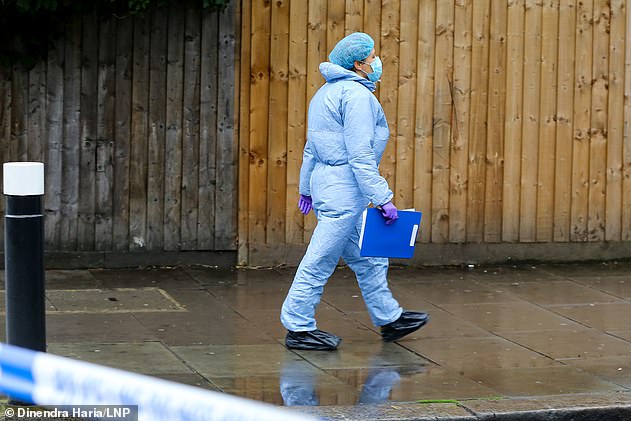 A post-mortem examination found Anas died from a 15cm deep stab wound to the left buttock. He also suffered cuts and bruises and two fractured teeth 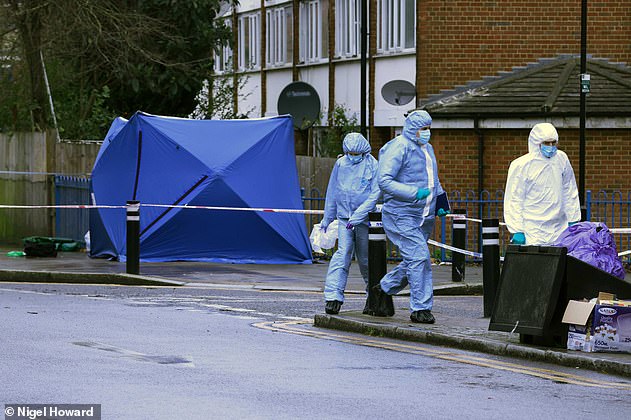 Police and Forensic Officers at the crime scene in north London, Haringey

Another reason given for the confrontation was that the people who had taken a phone belonging to one of the friends would be there, jurors heard.

One of Anas’s friends told police the idea was to have ‘like a little scrap’.

He said one attacker had a Rambo knife and two others had ‘bigger ones’.

He told officers that Anas had a hammer in his backpack, although it was not suggested he ever took it out.

Anas’s injured friend told police that one of the attackers had shouted ‘sauce (stab) him’.

As he ran away he felt one of them ‘poke him’ in the back, the court heard

Afterwards, he considered whether they had been ‘set up’ or ambushed, the court was told.

The other friend said the opposing group pulled out knives, one with a blade around 20in long.

Jurors heard police recovered two knives from a Chrysler Voyager parked nearby which was allegedly linked to some of the defendants.

The car keys and a Zombie knife were found at the home of one of the accused teenagers, jurors were told.

In a phone call from prison, the 17-year-old stabber referred to what he had done.