A teenage animal rights activist chained herself to a basketball net at an NBA game to protest the team’s owners cull of 5.3 million battery hens.

Zoe Rosenberg, 19, was arrested after pulling the stunt at the Memphis Grizzlies home game against the Minnesota Timberwolves on Saturday.

She did so to protest Grizzlies’ owner Glen Taylor’s cull of 5.3 million chickens at his battery egg farm after an avian flu scare.

The drama began when Rosenberg entered the court and littered the floor with flyers, stopping the game in the process.

The protester then put a yellow chain across her neck and body, attaching it to the goal post. She was quickly removed from the court and arrested. 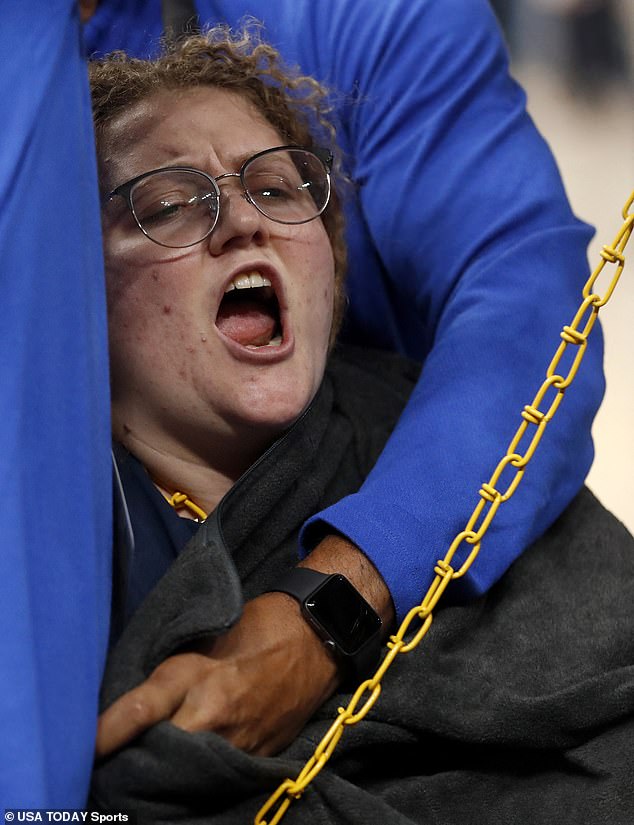 Rosenberg has been running her own animal refuge since she was 11. In 2019, she won the Paul McCartney Veg Advocate award

Rosenberg faces charges of disorderly conduct and criminal trespassing. She was released on a $2,500 and will have to appear in court on April 18.

The teen got into the court by accessing a restricted area in the FedEx Forum, NBC Memphis reports.

Rosenberg said that she bought a ticket for the game but wasn’t sat courtside, according to Fox Memphis.

On social media, Rosenberg, who lives in San Luis Obispo, California, elaborated on the cause of her protest saying that it was aimed at Glen Taylor and his company’s treatment of poultry. 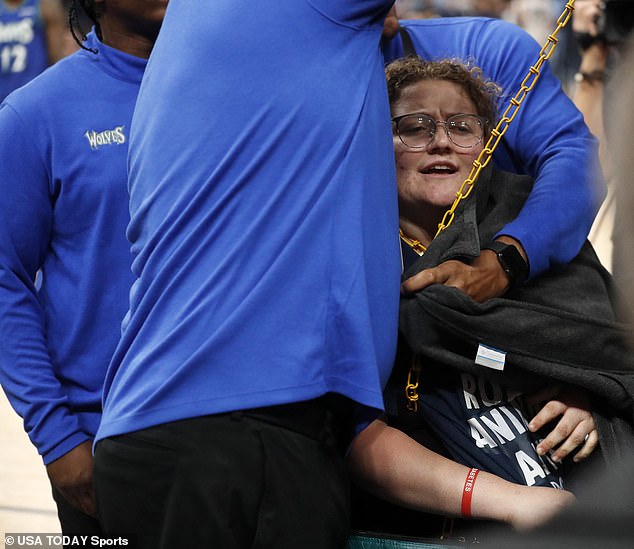 Rosenberg is facing disorderly conduct and criminal trespassing charges. She had a ticket for the game but it wasn’t for courtside 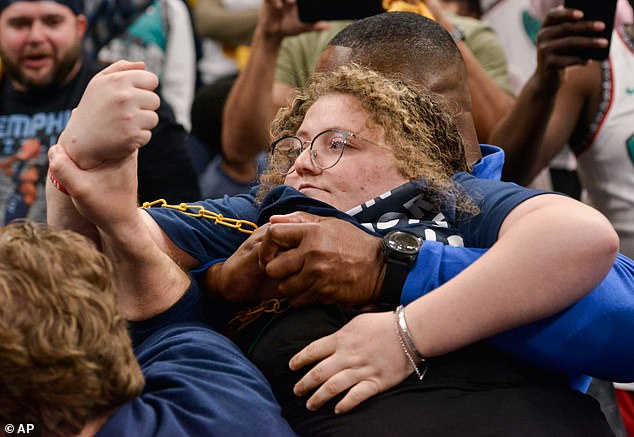 This isn’t Rosenberg’s first time in the limelight for protesting. In 2019, she interrupted the NCAA Football Championship game and in 2017, Rosenberg stopped play at Dodger Stadium in a protest over the stadium’s hot dogs

Following her release, Rosenberg posted her mugshot on Instagram and wrote in the caption, ‘This is my mugshot from jail. I have court in an hour. I’m facing charges on criminal trespass and disorderly conduct for disrupting the NBA playoff game to protest Glen Taylor, the owner of the and the owner of a factory egg farm that recently roasted 5.3 million chickens alive.’

In a separate post, Rosenberg said, ‘Protesting can be scary, but remaining silent and continuing to live in a world where animals are abused and killed is even scarier.’

Rosenberg included in the caption, ‘GlenTaylorRoastsAnimalsAlive.’ Those words were written across her t-shirt during the Grizzlies protest.

Taylor is due to hand over his interest in the Grizzlies in 2023 for former New York Yankees legend Alex Rodriguez.

Prior to the protest, Rosenberg wrote about Taylor on Twitter saying, ‘Some of my best friends are chickens, and I can’t even bring myself to consider the image of them being killed like this… My heart hurts to think that 5 million chickens, just as special as them, have suffered and died on just this one facility.’

Rosenberg was fist identified as the protester in a Twitter post from the group Direct Action Everywhere.

‘The group wrote in a tweet, ‘The woman who chained herself to Grizzlies’ hoop as part of ongoing efforts to get Timberwolves owner Glen Taylor to step down & return factory farm bailout $$.’ 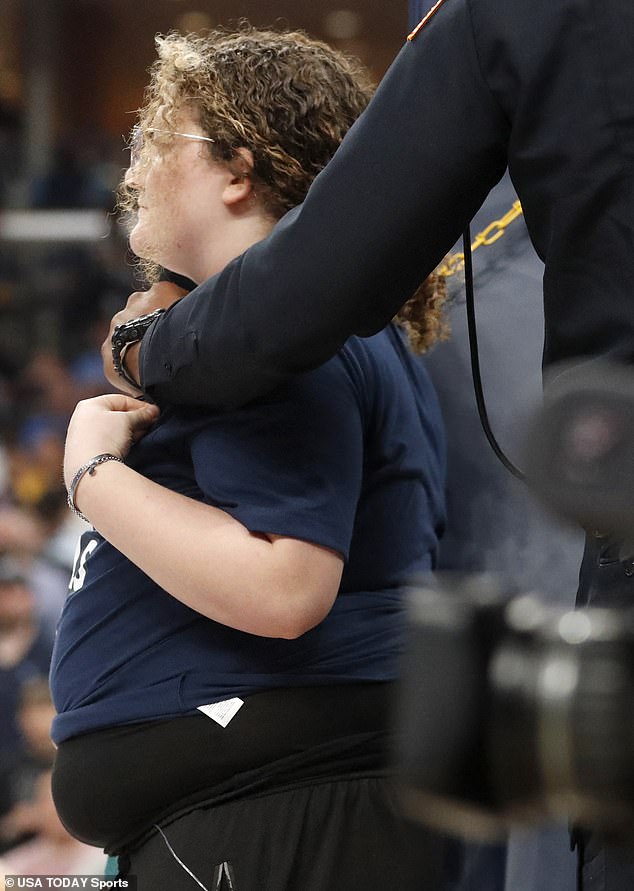 Zoe Rosenberg has been animal rights activist since she was 10 years old. Rosenberg credits her parents getting chickens as pets as sparking her advocacy

In 2017, Rosenberg first came to national attention when she staged a protest during Dodger Stadium over the stadium’s hot dogs. In 2019, Rosenberg staged a similar show of dissent during the 2019 NCAA Football Championship game.

Rosenberg said on her website that following her arrest at Dodger Stadium that officers mocked her and said that they would eat hot dogs in front of her.

At 11, Rosenberg started Happy Hen, an animal refuge. The awards that Rosenberg has earned during her time include being named as the Youth Activist of the Year and in 2019 winning the Paul McCartney Veg Advocate award.

According to her official website, Rosenberg has met with California Governor Gavin Newsom and given a TED Talk.  She is a student at the University of California-Berkeley.

Rosenberg said in a 2017 interview with Jewish Veg that her animal advocacy began when she was 10 years old and her parents got chickens. She said, ‘I realized then that chickens and all farm animals are no different than the cats and dogs I already loved and cared for at home.’