Parts of central Paris were placed on lockdown and 89,000 security officials were deployed across the country amid fears of a repeat of rioting a week ago which damaged a major monument and injured 130 people.

Paris Metro stations and tourist attractions including the Eiffel Tower, the Louvre, and the Musee d’Orsay are closed, as 8,000 security personnel in the capital alone try to quell the rising fury.

Earlier, tear gas was fired by officers as protesters stormed towards steel barriers and police trucks stationed outside the presidential palace.

Police also fired tear gas and rubber bullets along the Champs-Elysees as protesters shouted “Macron out”.

Around 30 people were injured in the clashes throughout the day, including three officers, while more than 700 were arrested across the country.

Wearing yellow vests, protesters told Sky News they were taking to the streets because they had become an “underpaid, overtaxed class”, who struggled to put food on the table for their families.

He said: “I don’t want to have kids because I have trouble feeding myself, let alone another mouth.”

Paris was not the only place where protests were held – in Marseille, 2,000 ‘yellow vest’ protesters paraded and gathered in front of the town hall.

They took turns on the megaphone, shouting “abolish the privileges, power to the people!”

Protesters also marched in Bordeaux and Toulouse, but the demonstrations were relatively peaceful.

The ‘yellow vest’ movement spread to Brussels as well, where it is being reported that 400 people have been arrested in clashes between police and protesters calling for the resignation of Prime Minister Charles Michel.

However, the violence was a far cry from last weekend, when 200 cars were torched in Paris.

The government promised “zero tolerance” against the protests this weekend, and security staff appear to outnumber demonstrators three to one.

Deputy interior minister Laurent Nunez told France 2 television at lunchtime on Saturday: “At the national level, including Paris, we’re at more than 700 detained with participation in the movement at 31,000 nationwide including 8,000 in Paris.”

As protests took over the streets in the last fortnight, Mr Macron abandoned a planned tax rise in fuel, but this has not stopped the anger.

The protests have moved to encompass a wider range of issues, including stagnant growth in the economy.

Interior Minister Christophe Castaner urged calm: “I ask the yellow vests that want to bring about a peaceful message to not go with the violent people.

“We know that the violent people are only strong because they hide themselves within the yellow vests, which hampers the security forces.”

Parts of Paris looked like they were bracing for a hurricane, with boards on windows covering up the Christmas decorations. 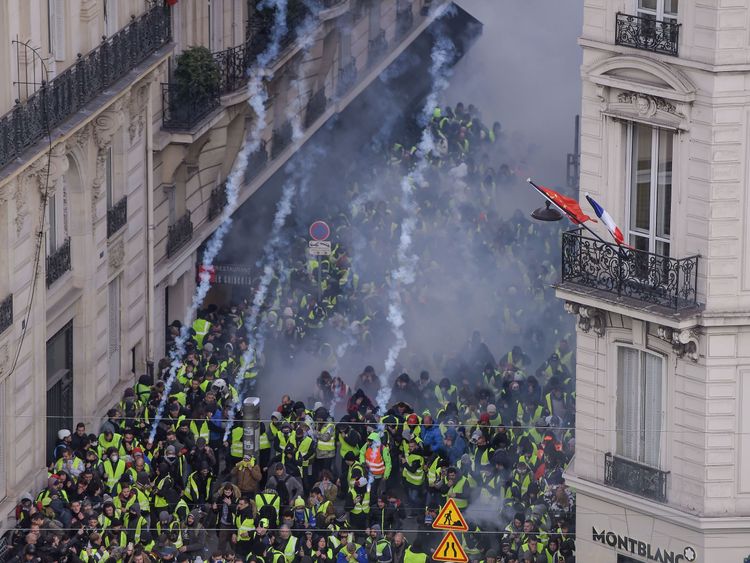 As well as extensive closures among some of Paris’ best-known monuments, the riots have led to Christmas markets, football matches and other events being cancelled.

Four people have been killed since the rioting began in mid-November.

The latest protests drew the attention of US President Donald Trump, who said they were a reflection of the failure of the Paris Agreement on climate change.

He tweeted: “The Paris Agreement isn’t working out so well for Paris. Protests and riots all over France.

“People do not want to pay large sums of money, much to third world countries (that are questionably run), in order to maybe protect the environment.”

He later added: “Very sad day & night in Paris. Maybe it’s time to end the ridiculous and extremely expensive Paris Agreement and return money back to the people in the form of lower taxes?

“The U.S. was way ahead of the curve on that and the only major country where emissions went down last year!”