The Taliban has warned the US it will face ‘consequences’ if it does not stop flying drones over Afghan airspace.

Zabihullah Mujahid, the group’s chief spokesman, accused Washington of violating a peace deal it signed in Qatar by continuing drone patrols over the country.

‘We call on all countries, especially United States, to treat Afghanistan in light of international rights, laws and commitments … in order to prevent any negative consequences,’ a statement posted on Twitter added.

American forces fully withdrew from Afghanistan on August 30, handing control of the country back to the Taliban after the government which it spent 20 years and trillions of dollars constructing imploded within a matter of weeks.

But President Biden vowed to maintain ‘over-the-horizon’ capability in Afghanistan, allowing the US to strike terrorist targets within the country. 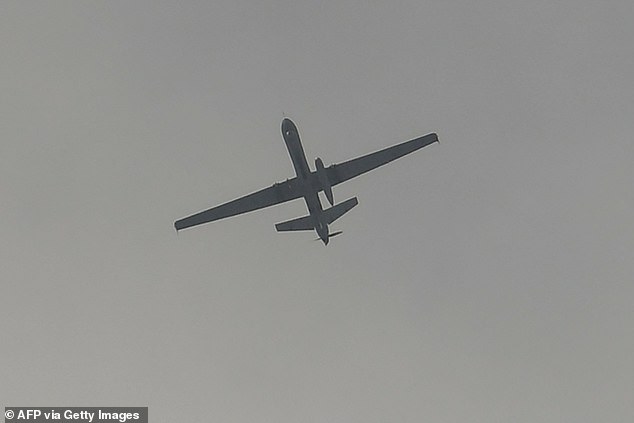 The Taliban has called on the US to end drone patrols over the country (file image), warning of ‘negative consequences’ if they are allowed to continue

That means drones are still flying within Afghan airspace, which Mujahid said violates international laws and should stop.

He did not make it clear what he meant by ‘negative consequences’ if the drone flights are allowed to continue.

The continued presence of American drones in Afghanistan has already become mired in controversy after a strike on August 29 which the US said targeted ISIS-K bombers preparing an attack on Kabul airport actually blew up a family-of-10.

The strike in Kabul – one of the US military’s last acts before its withdrawal – did not kill a single terrorist, senior US general Frank McKenzie has since admitted.

Having originally described the strike as ‘righteous’, McKenzie was forced to admit that it had actually been ‘a tragic mistake’.

Rather than killing a bloodthirsty terrorist, the strike had actually killed an aid worker for an American organisation who was applying for US residency along with nine of his family members – including seven children.

McKenzie said the family’s car was struck ‘in the earnest belief’ that it contained explosives and posed an imminent threat.

‘I am now convinced that as many as 10 civilians, including up to seven children, were tragically killed in that strike,’ McKenzie said.

‘Moreover, we now assess that it is unlikely that the vehicle and those who died were associated with ISIS-K, or a direct threat to US forces,’ he added.

The strike happened as the aid worker – named as Zamairi Akmadhi – pulled into the driveway of his home close to Kabul airport.

Members of the Ahmadi family were thought to have been walking towards the car of their father, 36, to greet him when they were killed in the explosion.

The Taliban a swept back into power in Afghanistan last month after most U.S. and other Western troops left, ending a military and diplomatic mission that began soon after the Sept. 11, 2001 attacks on the United States.

Taliban leaders deny Islamic State and al Qaeda militants are active in the country, although Islamic State recently claimed responsibility for bomb attacks in the eastern city of Jalalabad.

The Taliban are under pressure from the international community to renounce ties with al Qaeda, the group behind the 9/11 attacks on New York and Washington. 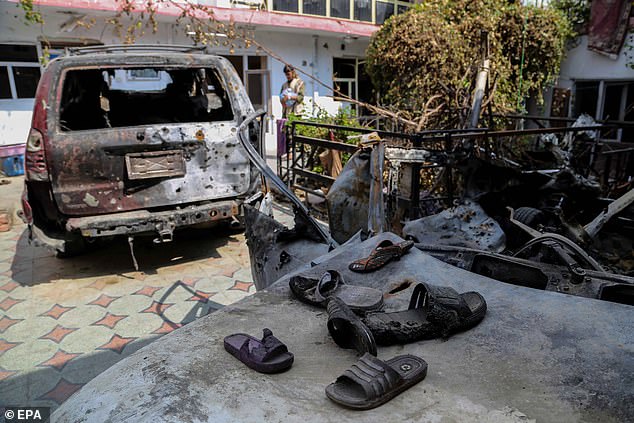