At least 46 people were killed in a fire overnight Wednesday at a high-rise apartment building in southern Taiwan and dozens of others were injured, local officials said Thursday.

The “extremely fierce” blaze started around 3 a.m. on Thursday, engulfing the entire building in the city of Kaohsiung and destroying many floors. Witnesses said they heard an explosion around the same time. 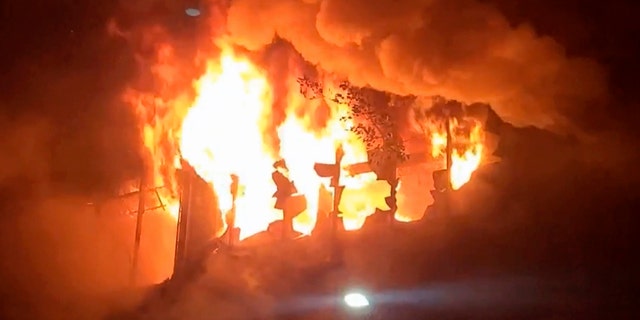 In this image taken from video by Taiwan’s EBC, fire and smoke pour out from a building in Kaohsiung, in southern Taiwan on Thursday, Oct. 14, 2021. The fire engulfed a 13-story building overnight in southern Taiwan, the island’s semi-official Central News Agency reported Thursday. (EBC via AP )
(EBC via AP)

Orange flames lit up the night sky as firefighters worked to cut down the blaze, leaving the building smoldering hours later.

At least 11 bodies were sent straight to the morgue, Fire Chief Li Ching-hsiu told reporters at the scene. Another 14 people who showed no signs of life were among 55 taken to the hospital. In Taiwan, official confirmation of a death can only be made in the hospital.

The cause of the fire is under investigation.

The building is around 40 years old.