Assad forces keep up pressure on rebel enclave amid reports of deaths of 16 children sheltering in a school. 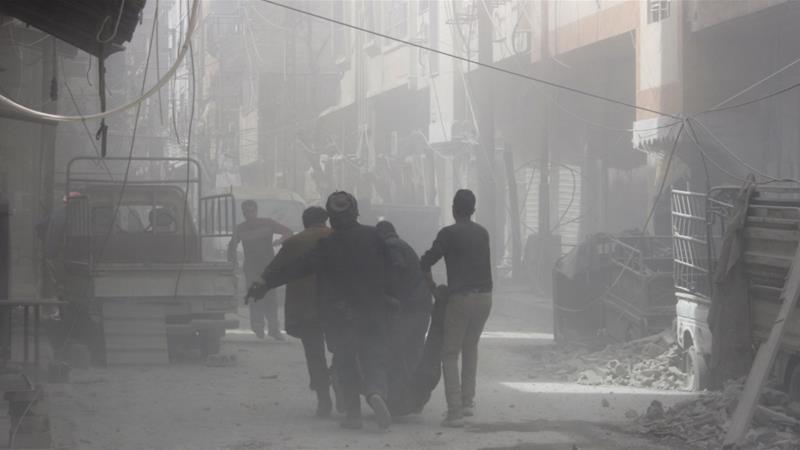 At least 56 people have been killed in air attacks by the Syrian and Russian war planes on Eastern Ghouta, according to the White Helmets, a voluntary organisation that operates in parts of rebel-controlled Syria.

On Monday night, at least 16 children and four women were reported killed after taking shelter in a school in the town of Irbin, which was hit by an air raid.

Activists told Al Jazeera that the deaths came as the government bombardment of the enclave resumed following a brief lull.

For its part, Syria state TV reported on Tuesday that at least 35 people were killed after a rocket was fired at a government-controlled area in Damascus.

SANA news agency blamed “terrorists inside Eastern Ghouta” for firing the rocket, which had targeted a market in the Kashkoul neighbourhood in Jaramana, a southeast suburb of Damascus.

Eastern Ghouta, which has been under rebel control since mid-2013, has been under a relentless bombing campaign, launched by Russian-backed Syrian forces a month ago.

According to the UN, hundreds of people have been killed as government forces and its Russian allies attempt to drive out armed opposition groups from Eastern Ghouta.

Activists and monitors say, however, the death toll is much higher, with some reporting as many as 1,400 killed.

Jaish al-Islam, one of the rebel groups in the area, launched a counterattack on Monday, activists said.

Al Jazeera’s Zeina Khodr, reporting from Beirut in neighbouring Lebanon, said that talks between the Russians and rebel fighters were “happening”, but the renewed bombardment was an indication that negotiations were not “going well”.

While the pro-government alliance seeks a full surrender, rebels want a ceasefire deal, our correspondent said.

“They are now in a weak position, and are shrinking in rebel-controlled territories under heavy fire, particularly in the town of Douma … and Irbin,” she said.

Though thousands have fled to various shelters in government-controlled territories, some 340,000 remain trapped inside, suffering from acute food shortages and a lack of medical supplies, the activists told Al Jazeera.

People in Eastern Ghouta have been appealing for international support and for monitors to be deployed on the ground to ensure their safety and protection in case government forces seize more territory in the enclave.

On Monday, Assad visited army posts in the area.

Lama Fakih, Human Rights Watch’s deputy Middle East director, told Al Jazeera that in order to ensure the security of people fleeing from Eastern Ghouta, “we do need to have monitors on the ground”.

“No one needs to be reminded of the violations that we have seen in places of detention by government forces,” she said.

“From torture, to ill-treatment, to sexual violence and even executions.”

Fakih’s statement comes as activists inside the enclave report the arrest of many who attempted to flee to government-controlled territories.

The United Nations human rights chief has said the siege of Eastern Ghouta “has involved pervasive war crimes”, citing the “use of chemical weaponry, enforced starvation as a weapon of warfare, and the denial of essential and lifesaving aid, culminating in the current, relentless, month-long bombardment”.

Zeid Ra’ad al-Hussein made the remarks during an informal meeting of the UN Security Council on Monday after a Russia procedural manoeuvre blocked him from speaking to a formal meeting.