Ankara: Syrian government forces rolled into a key region held by US-backed Kurds, winning praise from Russia and heading off a threatened Turkish advance as Moscow and its allies move quickly to fill the void left by a planned US pullout.

Syria's army command said its units entered the Manbij area at the request of its residents, according to state television. Kremlin spokesman Dmitry Peskov said Russia welcomed the return of government forces to the area, which has been controlled by the Kurdish YPG, a group Turkey views as the Syrian extension of a domestic terrorist organisation. 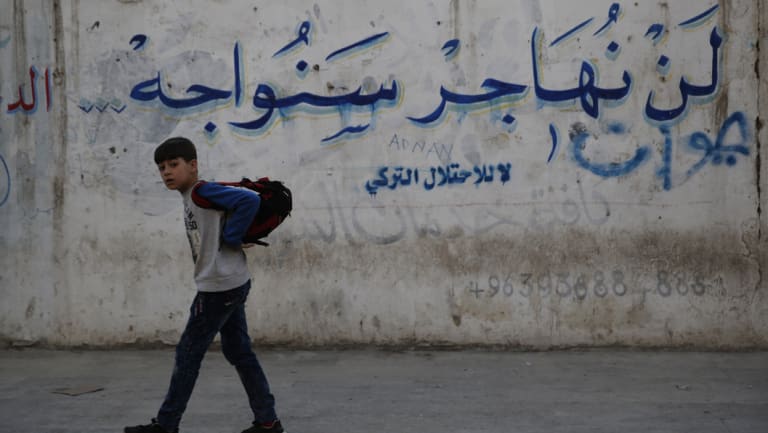 A Syrian student walks next a wall with Arabic that reads: “We will not emigrate we will confront, no to the Turkish occupation,” in Manbij, north Syria. On December 28, 2018, Syria’s military said it entered the flashpoint Kurdish-held town of Manbij, where Turkey has threatened an offensive. a claim that was refuted by US troops who patrol the town. The conflicting reports reflect the potential for chaos in the wake of the US surprise decision to withdraw troops from Syria. Credit:AP

"This is definitely a positive step in the direction of stabilising the situation," Peskov told reporters on a conference call after the Syrian announcement.

Kurdish forces have been scrambling to protect themselves after President Donald Trump abruptly announced plans to withdraw the US forces that had been backing them and supplying them with weapons. Russia and Turkey have been maneuvering to position themselves for a new order in a Syria without a US military presence.

The question after the US withdrawal is "who fills the power vacuum and carries out the fight against terrorist organisations'', Turkish Foreign Minister Mevlut Cavusoglu said Thursday, referring both to Islamic State and to the YPG.

On Friday, Syrian forces moved into areas between Turkish troops and Kurdish-held positions in Manbij, complicating Turkey's plans to take control of the town as agreed with the US, according to Turkish officials. The Syrian army advance came after Turkey dispatched hundreds of armored cars and tanks near Manbij.

Earlier in the day, the YPG issued a statement inviting Syrian forces to assert control over areas its militants have withdrawn from and to protect them from a "Turkish invasion".

Turkey's President Recep Tayyip Erdogan played down the Syrian move as a "psychological" one, saying that while Syria wants to raise its flag over Manbij, intelligence reports don't suggest a confirmed presence of its troops inside the town. 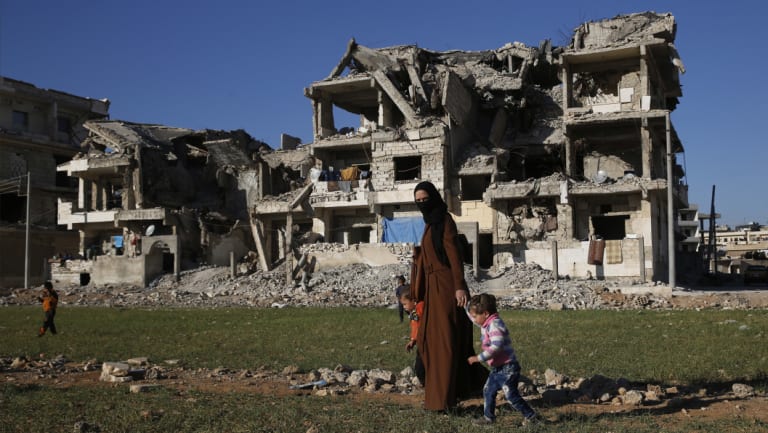 A Syrian woman with her children in Manbij, north Syria, On December 28, Syria’s military said it entered the flashpoint Kurdish-held town, where Turkey has threatened an offensive following the US surprise decision to withdraw troops from Syria. Credit:AP

"I may possibly talk to Putin on the phone or visit Moscow or Sochi" after talks in the Russian capital between Turkey's foreign and defense ministers and their Russian counterparts set for Saturday, he said.

Turkey's Defense Ministry said in a statement that the Kurdish "YPG/PKK terrorist organization has no right or power to make a statement on behalf of the local people and invite any other elements" to the area.

In the talks in Moscow on Saturday, Turkish officials will be seeking to win Russia's approval to access Syrian airspace for strikes against Kurdish militants and Islamic State, Hurriyet newspaper reported Friday, without saying how it got the information.

The talks will allow the two sides to "bring complete clarity and synchronize actions" going forward, said Peskov, the Kremlin spokesman. Russia has said the Syrian government should retake the areas vacated by the US, but also endorsed a role for Turkey in continuing the fight against Islamic State there.

The Kurds were instrumental in pushing back the Islamist militants after they seized on the chaos in the country to capture large swaths of territory.

"The US had long led the Kurds in Syria on and now they've dumped them, like many others before them," Alexei Pushkov, chairman of the Information Policy committee in the upper house of Russia's parliament, wrote on Twitter. "Now the Syrian Kurds are looking for protection in Damascus and Moscow."

The Turkish delegation will also discuss with Moscow its concerns about Iran's role in Syria, the pro-government Daily Sabah newspaper said Friday, citing unnamed diplomatic sources. Trump has faced criticism from both sides of the political spectrum for leaving a key part of the Middle East exposed to expanded Russian and Iranian influence.

Russian officials have welcomed Trump's plan to withdraw US troops, but expressed skepticism that the US will go through with it.