Champion surfers Owen Wright, Sally Fitzgibbons and Stephanie Gilmore are descending on Tweed Heads for the first competition since COVID-19 shut down the sport worldwide.

The broadcast-only, strike-mission style event is expected to start on Sunday, with 24 Australian competitors given just four days’ notice to convene for the Tweed Coast Pro at Cabarita Beach. 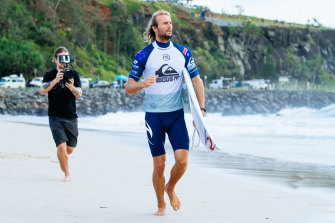 Owen Wright says there’s a lot of adrenaline flowing with the return to competitive surfing.

The surfers will be restricted to a competition bubble, subjected to coronavirus tests and their movements will be tracked prior to and during the event. Entry into the event bubble is restricted. Once surfers are eliminated from the two-day event they must immediately leave the beach under COVID-safe protocols.

The return of the sport also takes place after a spate of fatal shark attacks. A 46-year-old man was killed this week in an attack at Greenmount Beach at Coolangatta, 20 kilometres north of the Tweed Coast Pro site.

Surf writer Nick Carroll said in his blog this week that the attack challenged conventional wisdom over the behaviour of sharks in the region.

"This is the third fatal attack in Queensland waters in 2020," he said. "When you add the one on Rob Pedretti at Kingscliff in June, that makes four. Four fatal attacks is the global average over the past 50 years. It’s now been equalled within a few hundred nautical miles of Australian coastline." 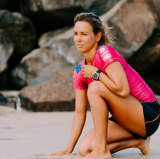 Sally Fitzgibbons says the time off from competitive surfing had been “bizarre but rewarding”.

“No one would wish that on their worst enemy,” he said. “I’ve gotten used to seeing sharks where I live and see them all the time at the north wall in Ballina. But when something like that happens it pulls you up.”

Wright said his break from the sport had refuelled his competitive spirit. The 190-centimetre surfer said he has worked out regularly with a gymnastics coach and experimented with board lengths and designs, opting for much shorter boards, during his break.

Similarly, Fitzgibbons said this year had already been one of change, describing the time away from the sport as “exciting but bizarre”.

From living a largely nomadic lifestyle to being home for nearly 10 months, she said this year had allowed her to get her body and mind into a position to achieve a major progression in her sport.

“I resolved that my surfing would be exciting and impactful and, above all, risk taking,” she said. “For me that has been the cool part of this time away.”

Seven-time WSL champion Gilmore, who grew up in the Tweed region, said the event gave her pause to think about her childhood and how lucky she had been to grow up surfing in this area.

“The Tweed Coast really holds a special place in my heart and I can’t wait to see what surf it delivers this weekend,” she said.