Supporters continue to rally round Brazil’s President Jair Bolsonaro after he ignored WHO coronavirus advice at the start of Covid pandemic – as his country’s death toll soars past 63,000 with more than 1.5 million infections

As the number of dead from coronavirus shot up in Brazil, the popularity of far right President Jair Bolsonaro has remained unchanged.

For his supporters, the president has done nothing wrong despite more than 63,000 deaths and 1.5 million infections.

Bolsonaro originally dismissed the coronavirus as a ‘little flu’ and his opposition to lockdowns and flouting of measures aimed at stifling the spread have provoked a hail of criticism from some.

Local epidemiologists and the World Health Organization have expressed concern about the president’s approach in a country that is second only to the United States in terms of total cases and deaths from the virus.

Yet a poll by Datafolha at the end of June found that 32 percent of Brazilians thought Bolsonaro’s government was ‘good or very good,’ a number that hasn’t dropped since the start of the health crisis. 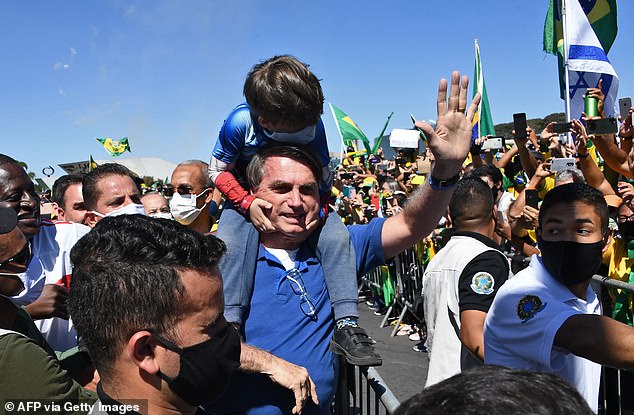 Despite more than 63,000 deaths and 1.5 million infections in Brazil and President Bolsonaro’s (pictured above greeting a rally of supporters) unwillingness to  tackle the coronavirus crisis, popularity among his supporters has remained  largely unchanged

He says most of the president’s supporters recognize there’s a health risk – but with Brazil set for a record recession this year, many have been deeply resistant to the lockdown.

However, today the people supporting Bolsonaro are not the same as those before the pandemic, said Valle, the co-author of a study on Bolsonarism published in June.

‘He’s lost some points amongst those that supported him since the election. The faithful make up only 22 percent,’ he said.

On the flip side, ‘he’s gained some amongst the lower social classes thanks to the 600 reais ($112) emergency support’ given to almost 60 million Brazilians. 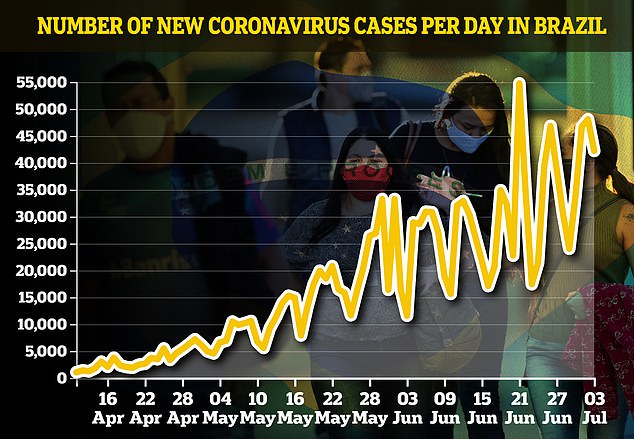 Every Sunday in Sao Paulo and the capital Brasilia, Bolsonaro supporters hit the streets draped in the nation’s flag to show their appreciation.

And they seem to be singing from the same song sheet as the president.

If there aren’t many at the demonstration, they say, it’s because the media has stoked fear and discouraged people from heading out.

If the economy is crashing, that’s the fault of state governors.

‘Bolsonaro has given money to the people and the states. But the state governors have mismanaged that money, rural hospitals are falling to pieces,’ said Neusa, who didn’t want to give her full name. 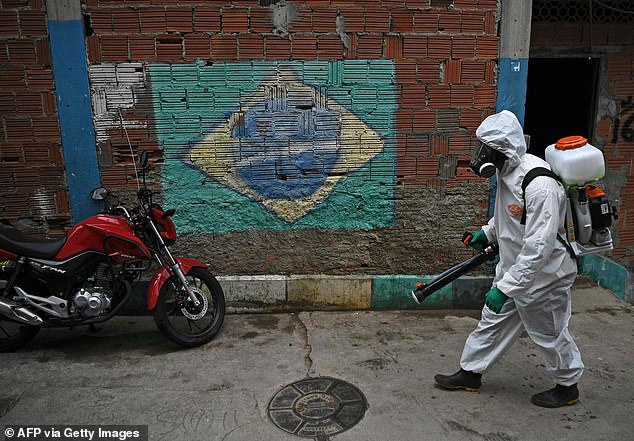 While most supporters recognise health risks, the fear of a recession is greater, and Brazil is set to experience a record recession this year. Above, a volunteer walks past a mural of the Brazilian flag as he disinfects an area at the Babilonia favela, in Rio de Janeiro 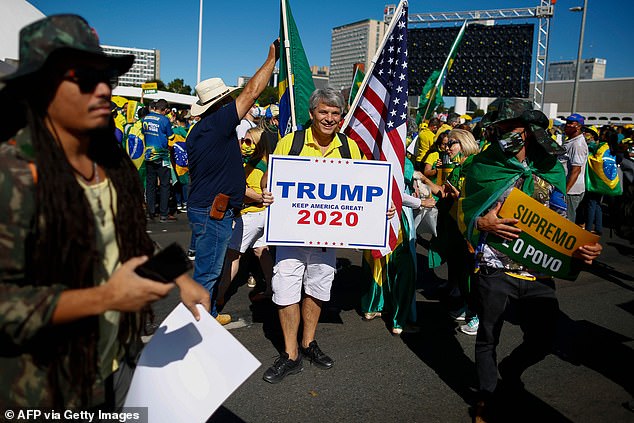 Similarities between U.S. President Donald Trump and Bolsonaro have been drawn for their populist approaches. Above, followers of Brazilian President Jair Bolsonaro hold a demonstration in his support in Brasilia, Brazil. One holds a Trump 2020

‘There was no need to close down anything,’ added the 50-something taking part in a pro-Bolsonaro protest in Sao Paulo and holding a banner calling for the state governor Joao Doria to quit.

Doria was quick to impose a lockdown at the start of the crisis, but the state, by far the largest in Brazil, has been the worst affected by the pandemic.

‘Bolsonaro is taking wise decisions’ and has ‘competent ministers,’ according to another demonstrator, Lee Freitas.

Two health ministers have left the job since the pandemic began after clashing with Bolsonaro over the country’s approach to the crisis.

‘We support this management. We’re delighted to have a patriotic president who is cheered everywhere he goes,’ added Freitas. 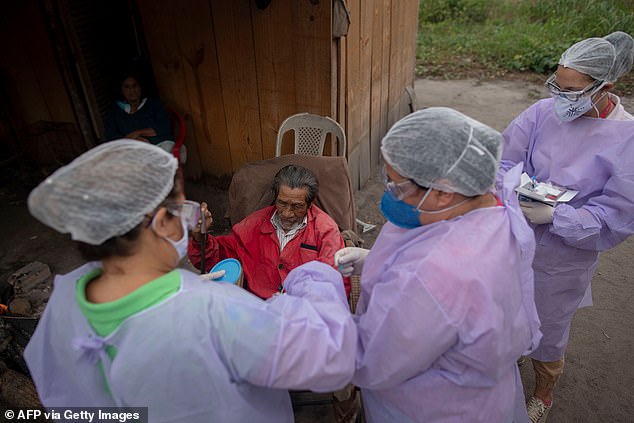 Brazil has seen 63,000 deaths from coronavirus and 1.5 million infections, making it second only to the U.S. in both statistics 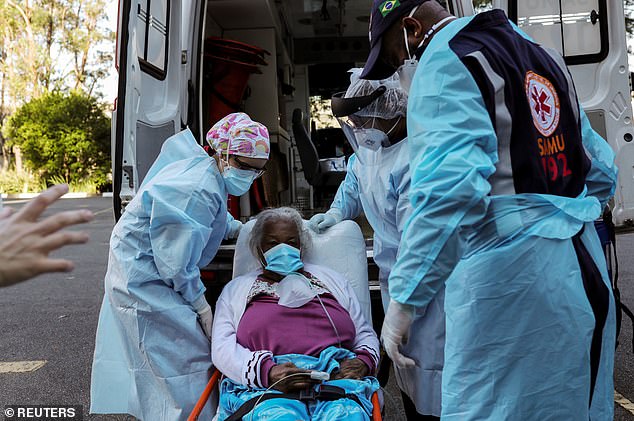 Above, Maria Geralda da Silva, 84, who is experiencing breathing difficulty and others symptoms of COVID-19 is carried into an ambulance by first responders of the Emergency Rescue Service (SAMU) as she is transferred to a hospital for treatment amid the outbreak, in Sao Paulo

Bolsonaro is well known for mingling with his supporters, even during lockdown when social distancing measures were in place – and being ignored by those very groups.

Coronavirus is a Chinese conspiracy for some Bolsonaro supporters.

‘It’s the result of the strategy of certain media, linked to the left and Chinese communism, to demoralize conservative governments like the Brazilian and American governments,’ said demonstrator Alex Silva, 46.

‘How do you explain that the number of COVID-19 cases didn’t explode in China,’ he added.

‘But the most negationist false information circulating in Brazil, like the one claiming local authorities have buried empty coffins to inflate the (virus death) numbers, are not necessarily pushed by Bolsonarists, which shows that few people believe in it,’ said Valle, who believes the president’s popularity ratings will drop soon enough.

‘Once the emergency aid ends, Bolsonaro’s popularity should reduce to the 22 percent faithful who voted for him and continue to support him.’ 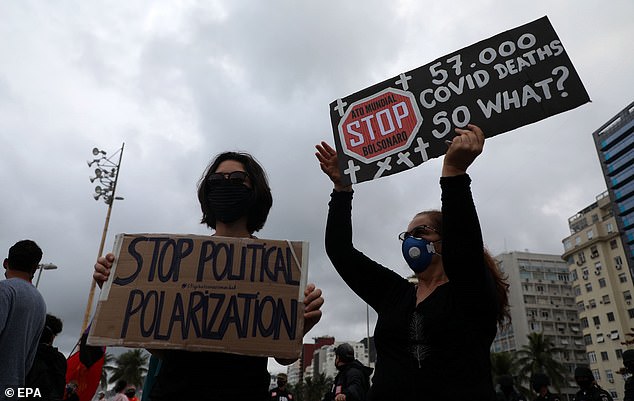 Many Brazilians have been outraged by their president’s approach, and have taken to the streets to let their thoughts be known. Above, Dozens of people participate in a march against the President of Brazil Jair Bolsonaro, on Copacabana beach. One woman holds a sign that reads: ‘57,000 Covid deaths. So what?’ 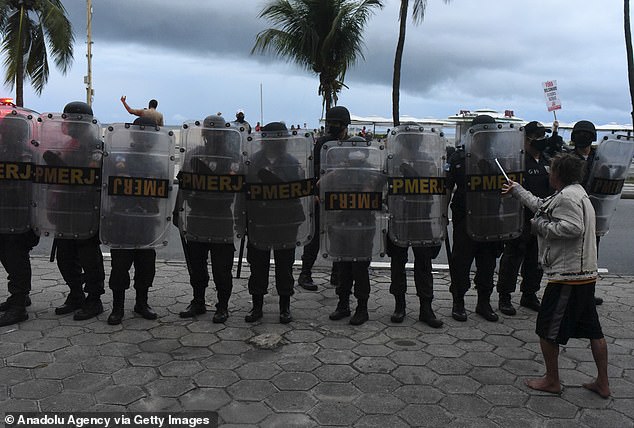 Echoing scenes witnessed in other countries in recent months, police have been sent in to clamp down on protests. Above: Military police stand guard during the protest against Brazil’s President Jair Bolsonaro, in Copacabana, Rio de Janeiro

Critics called the decision an attempt to hide the true toll of the disease in the country.

The move came after months of criticism from experts saying Brazil’s statistics are woefully deficient, and in some cases manipulated, so it may never be possible to gain a real understanding of the depth of the pandemic in the country.

On June 5, the federal Health Ministry took down a website that had showed daily, weekly and monthly figures on infections and deaths in Brazilian states.

The site later returned but the total numbers of infections for states and the nation were no longer there.

In a bizarre Facebook post, which was removed from his profile page on the social media platform, Bolsonaro cited an obscure guide about sex education to question the WHO’s authority on coronavirus.

He used this and other tenuous references to make his case the global agency is in no position to direct him on the best way to curb the spread of COVID-19.

By Chris Pleasance for MailOnline and AFP

Latin America has leap-frogged Europe to record the second-highest total of coronavirus cases of any continent, and is now second only to North America.

There are now more than 2.7million confirmed cases of the virus in Central and Southern America and the Caribbean, narrowly topping the 2.69million in Europe.

The rise is largely being driven by a rampant outbreak in Brazil, where the official case total is now just shy of 1.5million. 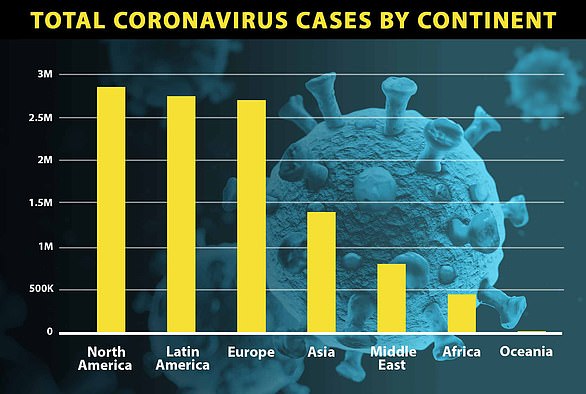 Latin America has recorded 2.7million coronavirus infections, overtaking Europe which has 2.69million and is now secondly-only to North America 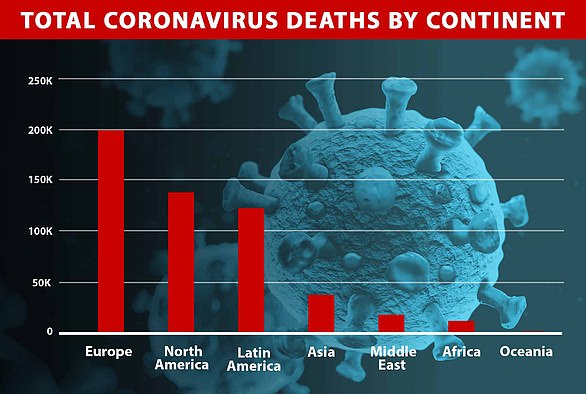 Europe, where the infection has been spreading the longest, still has the most deaths – but North and Latin America are catching up and are due to overtake by the end of the month

North America has more than 2.8million confirmed cases of the virus, almost 98 per cent of which are in the United States.

Deaths in both North and Latin America are still lagging behind those in Europe, where the infection has been spreading for longer.

However, both of those totals are now rising much faster than the toll in Europe and at the current rate will overtake it by the end of the month.

The spike has seen governors in several hard-hit American states roll back plans to reopen bars and restaurants, though moves are still going ahead in Brazil – urged on by President Bolsonaro.

Europe has also been cautiously easing lockdown restrictions in an attempt to find a way to a ‘new normal’, and has yet to see a resurgence in the disease.

Massively ramped-up testing programmes along with track and trace apps are being deployed in an attempt to snuff out local outbreaks before they can mushroom into widespread epidemics. 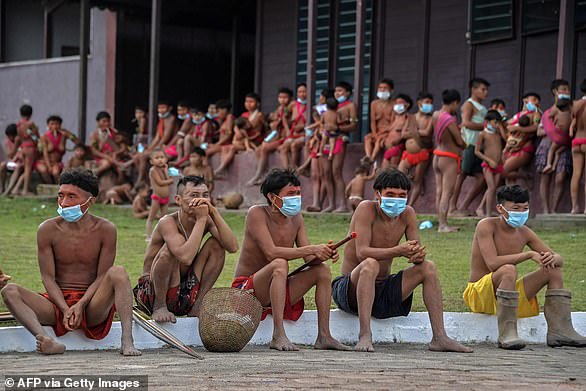 The rise has been fuelled largely by a rampant outbreak in Brazil, which has recorded a total of 1.5million cases (pictured, indigenous peoples are pictured wearing face masks) 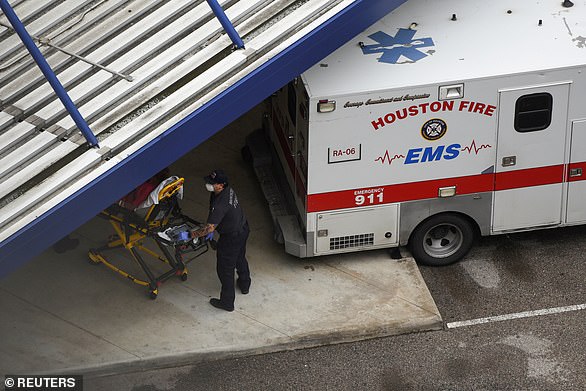 North America has the most coronavirus infections at 2.8million, around 98 per cent of which are in the USA (pictured, a hospital in Texas which has seen cases soar in recent weeks)

In Asia, where track and trace has been common since the start of the pandemic, case and death tolls have remained comparatively low.

The continent has recorded a total of 36,000 deaths from 1.3million cases.

The Middle East, which was also quick to go into lockdown with the exception of hard-hit Iran, there have been 16,959 deaths from 785,842 cases.

Africa, which was also an early adopter of lockdowns and has a much younger population on average than all other continents, there has been 10,609 deaths from 433,436 cases.

Oceania – including Australia and New Zealand which were quick to declare victory over COVID – has suffered just 133 deaths from 9,585 cases.

However, fears of a second wave are now growing, particularly in Australia where the second-largest city of Melbourne has seen cases soar in the past week.

The global hunt for a coronavirus vaccine continues but there has been a ray of hope.

The European Commission, the bloc’s executive arm, on Friday authorised the use of anti-viral drug remdesivir to treat the new coronavirus.

Two US studies have showed it can reduce the length of hospital stays. 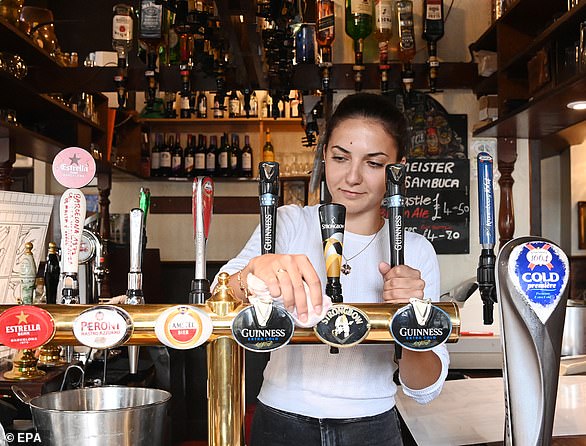 Having once been the epicentre, Europe is now easing its way out of lockdowns which have suppressed the disease, with pubs set to reopen in the UK tomorrow (pictured)

However the United States announced earlier this week that it had purchased 92 per cent of all remdesivir production by the California-based Gilead laboratory until the end of September.

Globally, almost 11million cases of coronavirus have been registered in 196 countries and territories, along with more than half a million deaths.

The tallies, using data collected by AFP from national authorities and information from the World Health Organization (WHO), probably reflect only a fraction of the actual number of infections.

Many countries are testing only symptomatic or the most serious cases.

The UK case figures have been revised down from the 313,483 reported previously after the authorities changed their counting method.