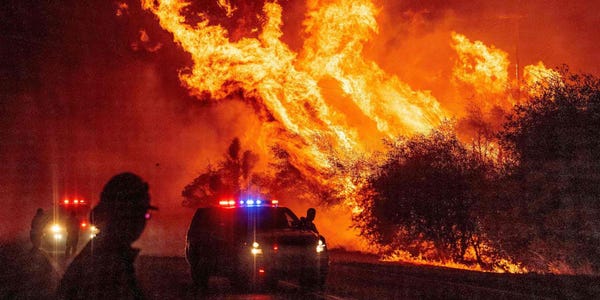 Wildfires propelled by fierce winds and dry air have roared across California and Oregon in recent weeks, prompting hundreds of rescues and forcing tens of thousands of evacuations.

The damage caused by the fires has been extensive — Gov. Gavin Newsom said at a press briefing on Tuesday that 7,606 fires have burned 2.3 million acres so far this year, setting a record. By the same time last year, 4,927 fires had burned just 118,000 acres, according to The New York Times.

As of Wednesday, California's fires have resulted in eight deaths and more than 3,700 structures destroyed, according to the California Department of Forestry & Fire Protection. The agency said more than 14,000 firefighters were battling 28 major wildfires across the state.

These before-and-after photos show the extent of the damage.

Satellite images from NOAA show massive swaths of smoke emitting from wildfires dotted across California and Oregon. This composite image shows how the states looked on August 8 compared to September 8. 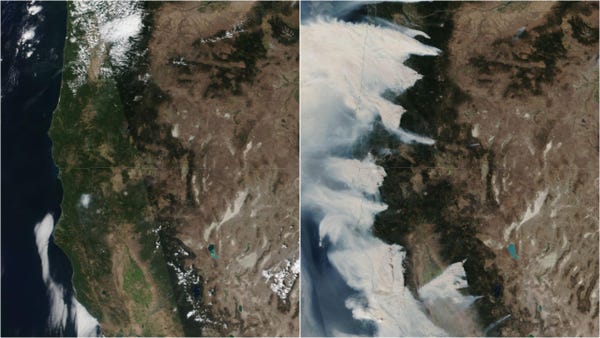 The Creek Fire in Sierra National Forest in Fresno County has already burned up more than 163,000 acres and remains 0% contained. These images show the Creek Fire blaze along different parts of the CA-168 on September 7 and September 8. 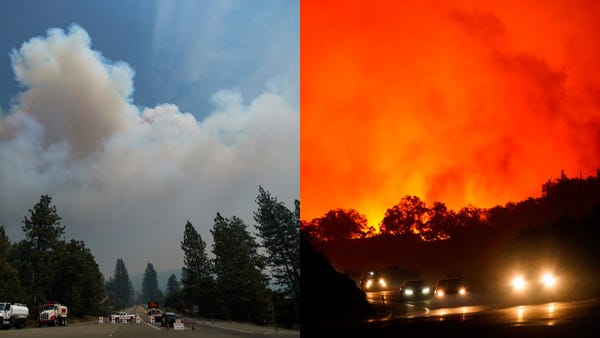 Shaver Lake was hit particularly hard by the Creek Fire. Hundreds of people in the area were trapped for days awaiting rescue by helicopters that struggled to land through the plumes of smoke. 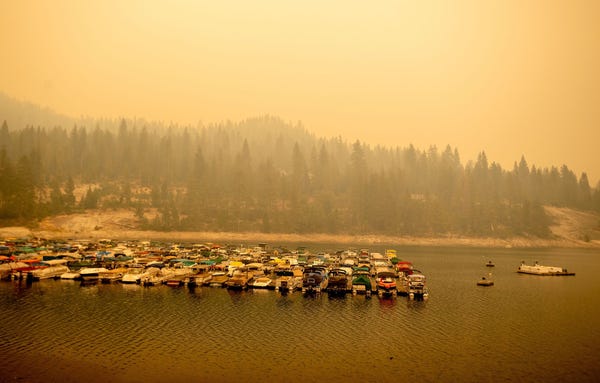 Before and after photos show the lake's normally peaceful banks consumed by flames. 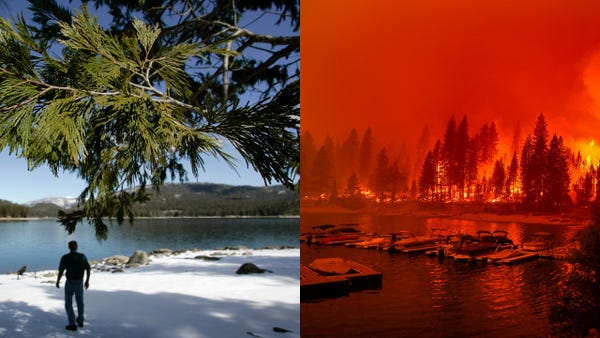 The effects from the wildfires were visible in the skies over the San Francisco Bay Area, which turned an apocalyptic orange on Wednesday. 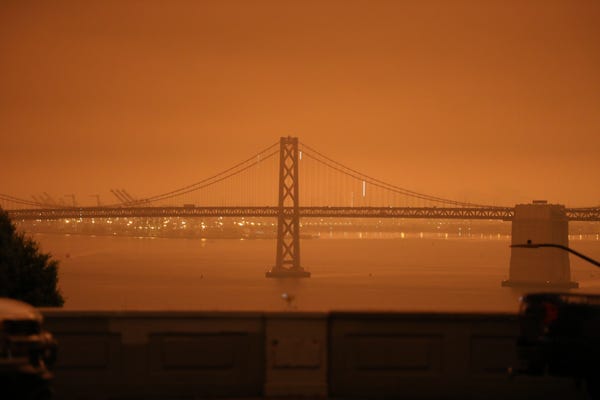 The Bay Area Air District said the fiery skies were caused by ash transported from the Northern California fires. The agency said the particles scatter blue light and only show yellow, orange, and red light, and that the skies could darken if the smoke grows worse. 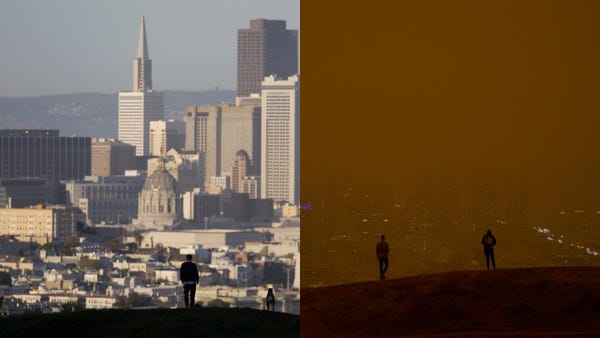 The damage is tangible — buildings and structures across California have undergone fire damage or burnt to the ground entirely. 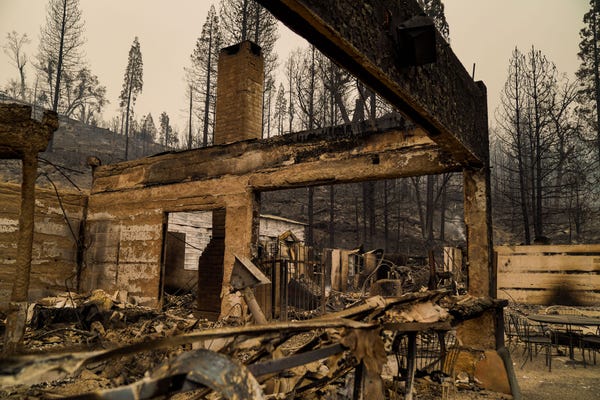 The image to the right shows Lake Oroville's Bidwell Bar Bridge as the Bear Fire eating up Butte County continued to grow on September 9. 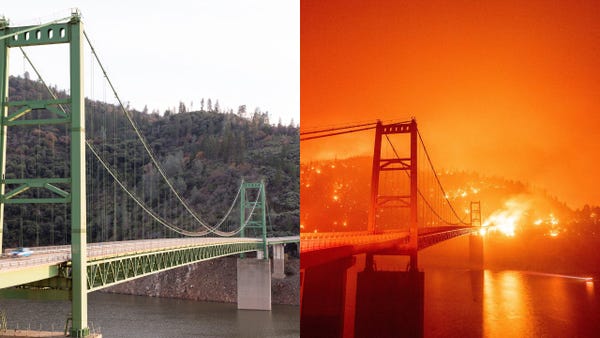 On September 9, the Bear Fire forced thousands of residents to evacuate from the Lake Oroville area in Butte County roughly 80 miles north of Sacramento. 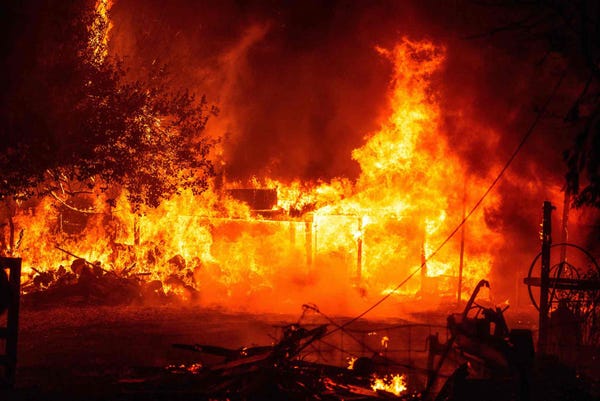 Just three years ago, Lake Oroville struggled to recover from a drought. Now, in 2020, flames from the Bear Fire could be seen licking its shores. 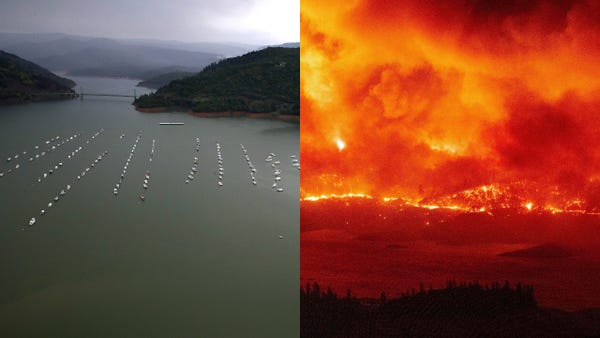