(Reuters) – A surge in U.S. retail gasoline prices to record highs has prompted governors and lawmakers in several states to consider slashing their fuel taxes and to ramp up pressure on the federal government to do the same.

The push reflects worries in state governments that the rapid spike in fuel costs could hurt motorists and chill local economies, and that federal efforts to keep prices down so far have been insufficient.

"Due to a total failure of leadership in Washington, we are actively working with the Georgia House and Senate to quickly move legislation that will temporarily suspend the state’s motor fuel tax,” said Georgia Governor Brian Kemp, a Republican. The state has a 29.1 cent per gallon gas tax.

Governors and lawmakers in California, Maine, Michigan, New York, Tennessee and elsewhere are considering similar moves. A coalition of six Democratic governors – from Colorado, Michigan, Minnesota, Pennsylvania, New Mexico, and Wisconsin – also sent a letter this week to U.S. Congressional leaders, asking them to support a bill to lift the nation’s 18.4 cent per gallon federal tax.

“Money saved at the pump translates into dollars back in consumers’ pockets for groceries, childcare, rent, and more,” they wrote.

U.S. consumer prices surged in February, culminating in the largest annual increase in 40 years, and inflation is poised to accelerate further in the months ahead.

Pump prices struck $4.38 on average nationwide on Thursday, according to motorist group AAA, driven in part by rising global demand and the disruption of Russian oil supplies since Moscow’s invasion of Ukraine. 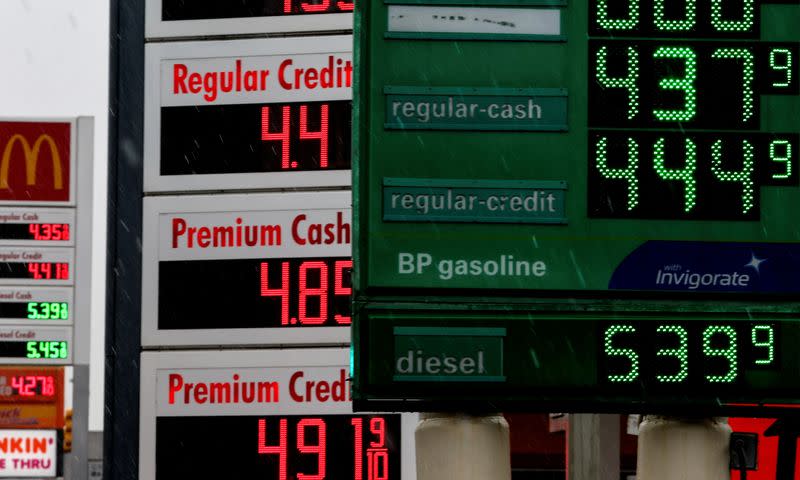 The administration of U.S. President Joe Biden, which announced a ban on Russian oil imports this week, has attempted to curb rising consumer energy prices by orchestrating the release of crude oil stockpiles from emergency reserves in concert with other consumer nations.

The White House has said it is studying additional moves to blunt the impact on U.S. fuel consumers, and administration officials have called on domestic and foreign energy producers to drill more oil quickly to stabilize the market.

Taxes, however, make up a significant chunk of prices at the pumps. They include the 18.4 cent federal gas tax, along with state and local levies that can vary broadly from below 10 cents to nearly 60 cents per gallon.

State and local governments collected a combined $52 billion in revenue from motor fuel taxes in 2019, according to the Urban Institute. Most of that money is diverted to transportation spending, including for road, bus and metro systems.

Michigan's Republican-led legislature announced on Wednesday that it plans to vote on a six-month suspension of the state's 27.2 cent a gallon fuel tax. Michigan's Senate Majority leader Mike Shirley, a Republican, estimated that the move would save drivers about $750 million.

In New York, state lawmakers from both parties are calling for a suspension of the state's 48 cent per gallon gas tax. Governor Kathy Hochul said Monday she is speaking with her budget office about the potential budget impact.

California Governor Gavin Newsom, a Democrat, meanwhile, said Tuesday that his administration was developing a proposal to offer Californians a tax rebate to help cover the rising costs of fuel.