Melbourne’s spate of wet and humid weather is driving a spike in potentially deadly mould lodging under carpets and on walls and furniture, and experts say the problem is on the rise.

Mould is a more frequent problem in NSW and Queensland, but the La Nina conditions Victoria has experienced with record rainfall and flooding have led to an increase in local outbreaks. 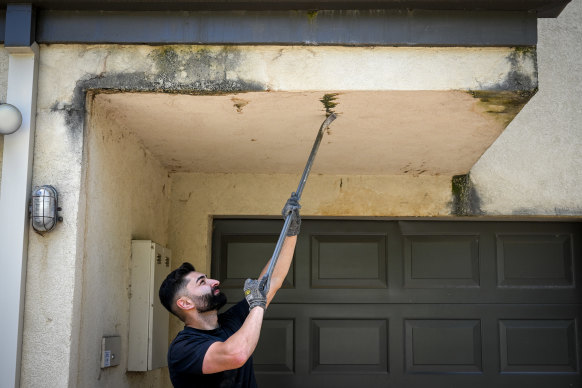 “We have been getting heaps of mould jobs coming through,” Steven Constantinou, 32, said. “It’s from the deluge of rain and moisture, and over time mould builds up.”

Constantinou is a civil and geotechnical engineer by trade, but he now works full time on demolitions and removing mould through gig economy platform Airtasker.

He spent a full day last week removing mould at a house in Hawthorn that was covered inside and out.

“There was water leaking from the roof as well from the shared balcony wall, so the architraves were mouldy as well and the carpet,” he said. “If it is mould damaged we remove it; it is not really salvageable.” 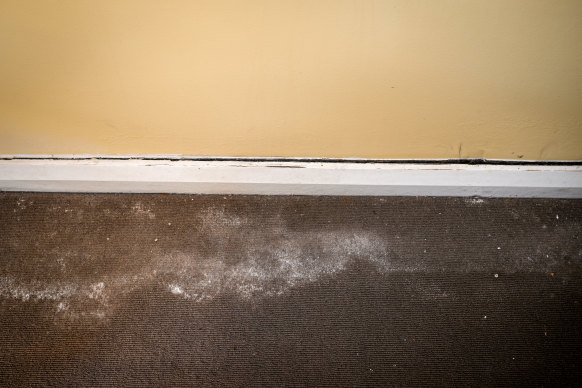 Mould and water damage at a home in Hawthorn before the home was cleaned by Steven Constantinou. Credit:Eddie Jim

Owner Con, who did not want his full name published, said the house was his mother’s, and after her death it had sat empty, which was when the mould set in.

“My feeling was absolute horror and just thinking how it was possible,” he said. “I thought, ‘Is this really her house?’ It took us by surprise more than anything else.”

Con said it had cost about $2000 to have the mould removed, which was more than he expected but understandable given the extent of the mould.

“We had mould, not just a little bit, but pretty bad absolutely everywhere from balconies, gutter, ceiling cornices,” he said. “I didn’t expect mould to get to that depth, even the boundary walls outside. The smell got me as well; when you walk in and think, ‘This is not good.’”

The number of residential cleaning tasks on Airtasker have doubled in the past month compared with the same time last year. Airtasker chief executive Tim Fung said the cost of cleaning up mould ranged from $20 to $6000.

“[We] are being inundated with requests for mould cleaning,” he said. “As well as a 50 per cent increase in cleaning tasks, general handy people are also being called in to help clean up the mess.”

Moisture and humidity levels create prime conditions for mould to grow indoors, which can damage property as well as impact health, putting people at increased risks of asthma, allergies and respiratory infections and symptoms.

The World Health Organisation attributes much of the world’s 300 million cases of childhood asthma to living with indoor dampness and mould.

In Britain last month a coroner found that two-year-old Awaab Ishak had died following “chronic exposure” to mould in his family’s flat.

Dr Michael Taylor, a Flinders University microbiologist with an interest in mycology – the study of mould, fungi, spores and mushrooms – said there was an increase in mould in Melbourne, and it could cause health issues.

“Most of us tend not to react strongly to mould spores, but people who are undergoing chemotherapy, have had an organ transplant or are immunocompromised are at risk,” he said.

“Another subset is asthma sufferers who will react in a way like an allergic reaction.” 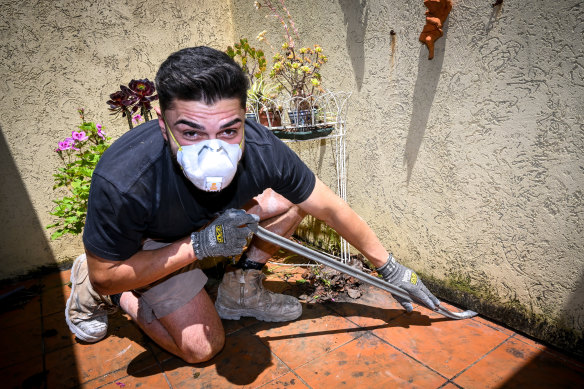 Rebecca Bentley, professor of social epidemiology at Melbourne University, said the changing climate was having an impact on the amount of mould.

“Mould is on the rise,” she said. “Our housing infrastructure is just not built for the climates we are experiencing. Mould in people’s homes is seen as their responsibility, but this is individuals bearing the cost of a broader problem.”

VicHealth advice to avoid mould build-up in the home includes fixing leaky plumbing and roofs, using exhaust fans, airing the home regularly by opening windows and doors on warmer days, and venting clothes dryers to the outside.

If mould has already set in, VicHealth advice is to consider using professional removalists. 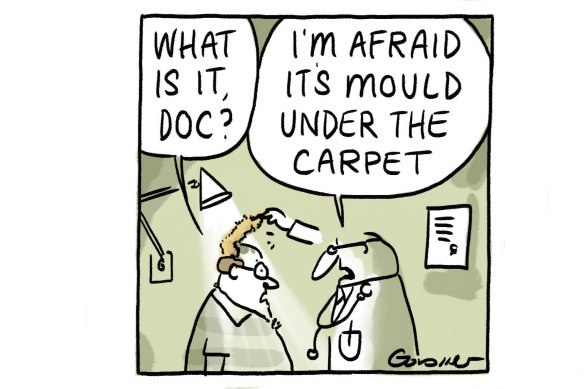 If you do decide to remove the mould yourself, the advice is to wash clothing, bedding and other soft fabric articles such as soft toys on a hot cycle.

Other contaminated soft furnishings that cannot be put in a washing machine have to be cleaned or thrown out.

All affected hard surfaces have to be thoroughly cleaned. In many cases, VicHealth advice is that household detergent can do the job if used properly.

VicHealth tips to avoid mould buildup in the home