Spanish pensioners were cheered and applauded as they left their town in a fleet of ambulances yesterday after an outbreak of coronavirus at their care home.

The convoy of Civil Guard vehicles took 41 people out of Alcala del Valle to another residence 70 miles away, Spanish media said.

The regional government in Andalusia ordered them out of the Dolores Ibarruri care home after at least 38 of its residents were diagnosed with Covid-19.

Local residents tried to lift the pensioners’ spirits as they left the town yesterday, sending them good wishes from their balconies as the convoy drove past.

One onlooker shouted: ‘Come on, you are going to be fine, they are going to take very good care of you, don’t worry, you will be back very soon!’ 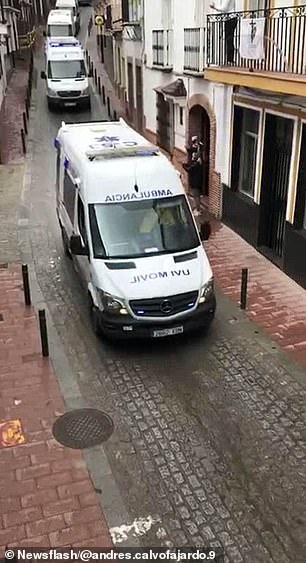 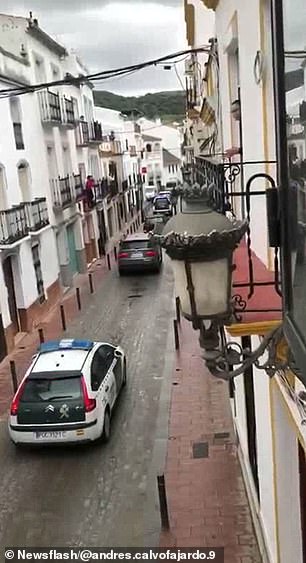 A convoy of ambulances and Civil Guard vehicles drives along a narrow street in the town of Alcala del Valle, where dozens of pensioners were evacuated from a care home 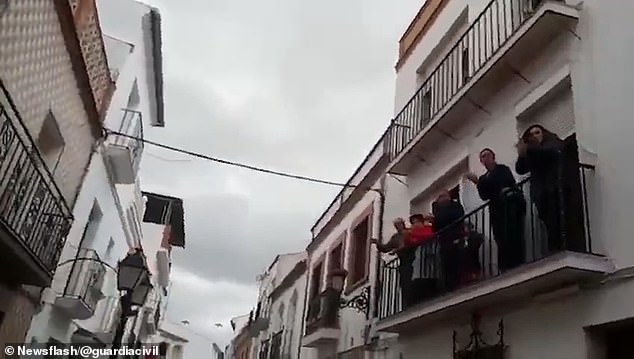 According to Spanish media, the residents are being moved to a different home in La Linea de la Concepcion, a two-hour drive away.

Although there was applause for the pensioners as they left, some relatives say they were not informed about the transfer and fear their relatives will not get the correct medication.

‘They have not allowed him to take his clothes or his personal belongings. We do not know who will attend to them or if they know what medication our elders take,’ the nephew of one 99-year-old evacuee told El Mundo.

‘The relatives have not been informed at any time, nor the provisional director of the residence, who in the last few hours had managed to gather material and personnel to guarantee the operation of the centre.’

Reports say that 38 out of 41 residents have tested positive, along with 19 of the 33 workers in the home. Three people have reportedly died.

Juan Franco, the mayor of the town, had been working in the care home with four councillors after the staff fell ill.

However, the building was evacuated yesterday by order of the regional Andalusian government.

Residents in worse condition were taken in the ambulances while the rest were in other vehicles escorted by the Spanish Civil Guard. 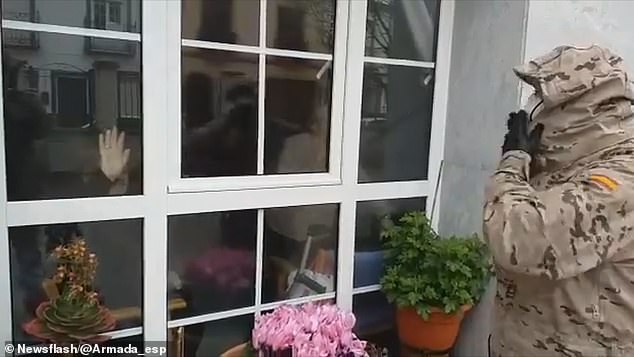 A Spanish army officer waves at people in a nursing home, keeping their distance behind a window 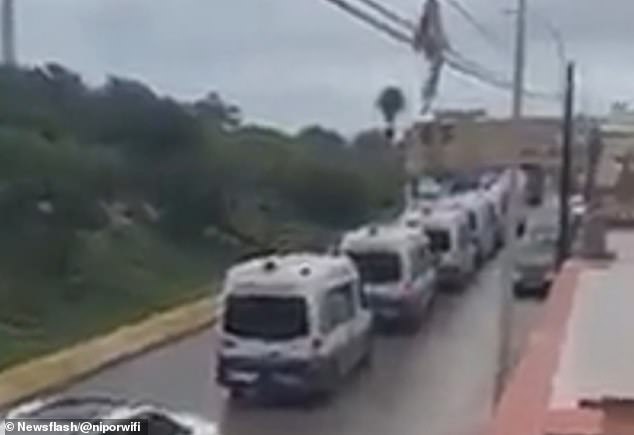 The transfer of the residents is believed to be a temporary measure as the Emergency Military Unit is disinfecting the nursing home.

But mayor Franco said he had not received any official document from the regional government about the residents being moved.

Earlier this week, Spain’s defence minister revealed that some elderly residents had been found dead or abandoned at some care homes.

Investigations were launched after soldiers made the grim discoveries when they went to disinfect the nursing homes.

Some elderly residents had apparently been found dead under the same roof as relatives who were still alive.

Spain now has the world’s second-deadliest outbreak, after its death toll surged past China’s today.

The figure is now higher than the 3,285 people who have died in mainland China, where the outbreak began in late 2019.