Madrid: Spain's Prime Minister Pedro Sanchez braved street protests in Barcelona to unveil a slew of measures aimed at reaching out to Catalan public opinion in a gambit that also risks alienating voters in the rest of the country. 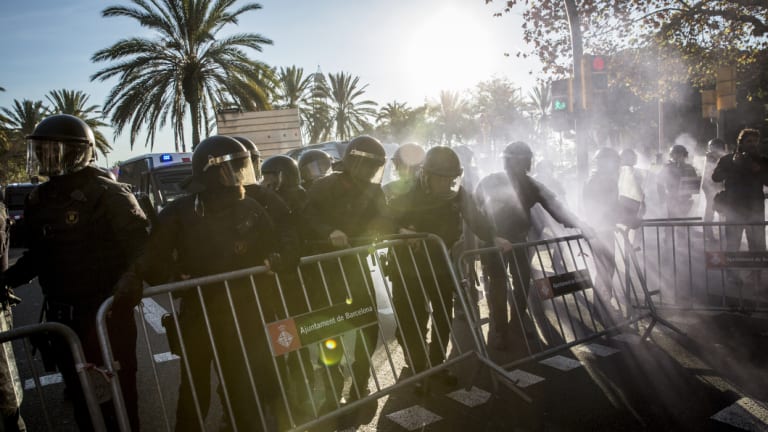 Riot police remove a barrier during a protest by supporters of Catalan independence on Paralelo Avenue in Barcelona, Spain.Credit:Bloomberg

His Cabinet, meeting in a 14th century Barcelona mansion, approved the biggest increase to the minimum wage since 1977 and steps aimed more directly at Catalonia including the decision to rename Barcelona airport in honour of Josep Tarradellas, the first president of the region to take office after the death of the dictator Francisco Franco.

"What we have done here is an act of affection towards Catalonia and democratic labour for the well-being of people," Government Spokeswoman Isabel Celaa said in a news conference at the end of the meeting.

Even so, ministers met on Friday against a backdrop of scuffles between police and protesters who had mounted street barricades.

The Catalan question is again taking centre stage in Spanish politics as Sanchez prepares for a likely snap election next year. The premier leads a fragile minority government that is struggling to pass legislation and has bet his political future on attempts to rebuild bridges with the region's separatists. 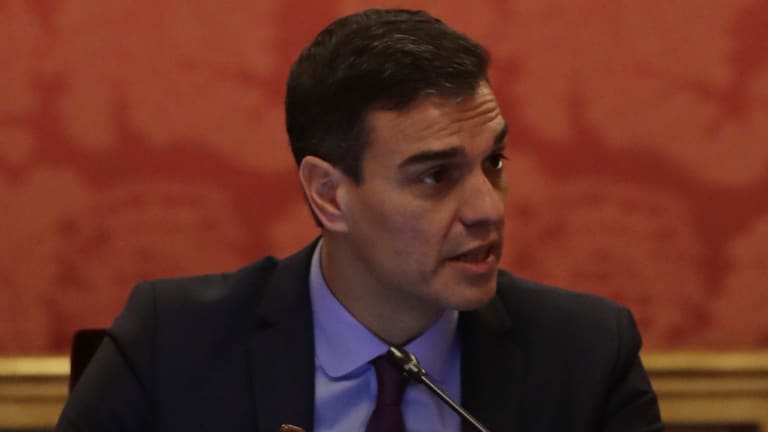 Sanchez's two main rivals are taking a much harder line, seeking to capitalise on the anger still simmering in the rest of the country at last year's failed attempt to break from Spain.

Six months after Catalan independence parties helped Sanchez take power in a no-confidence vote, they have steadfastly refused to become reliable partners willing to back his broader government program.

At the same time, Ciudadanos and the People's Party, his rivals on the political right, accuse him of coddling rebels who tried to break up Spain. Sanchez's policy of dialogue with the separatists was also a factor in the emergence of Vox, a party with a more radical conservative agenda that won a clutch of seats in regional elections in Andalusia earlier this month.

Protests began early on Friday with campaigners blocking about 20 roads including the AP-7 motorway near Tarragona and parts of Barcelona's ring-road network, Europa Press reported. 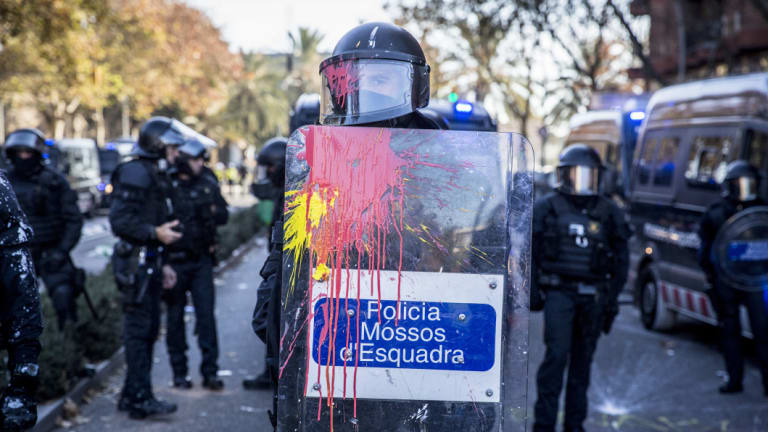 Paint splatters the riot shield and visor of a member of the Mossos d’Esquadra police force during a clash with supporters of Catalan independence on Paralelo Avenue in Barcelona, Spain.Credit:Bloomberg

Television images showed crowds of protesters gathering in the city with some scuffles breaking out in confrontations with police that El Pais newspaper reported led to 11 arrests.

The clashes never looked like reaching the intensity of those seen during a crackdown on the previous Catalan government's attempt to hold an illegal independence referendum in October last year.

The government approved an increase in the monthly minimum wage to €900 euros ($1456) and salary increases for civil servants. In another gesture directed at Catalonia, ministers allocated €113 million for improvements to the region's roads and approved a statement recognising the "full dignity" of Lluis Companys, the former president of the Catalan government shot by Franco's forces in 1940.

Sanchez can point to some progress in his policy of dialogue with Catalonia.

The separatist parties ERC and PDeCat on Thursday unexpectedly backed his deficit goals in a vote in the Spanish parliament. That came as a boost for the government even if the PP-controlled Senate looks certain to throw out the budget strategy as soon as next week.

In another positive development from Sanchez's point of view, four separatist leaders facing trial for their part in last year's independence push abandoned their hunger strike on Thursday.

Sanchez and Catalan President JoaquimTorra also held a meeting in Barcelona on Thursday evening at which they acknowledged their differences but agreed to keep communication channels open in pursuit of "a political proposal that can count on widespread support in Catalan society."