Puigdemont’s Together for Catalonia party to file complaint against the move, saying he is a legitimate candidate. 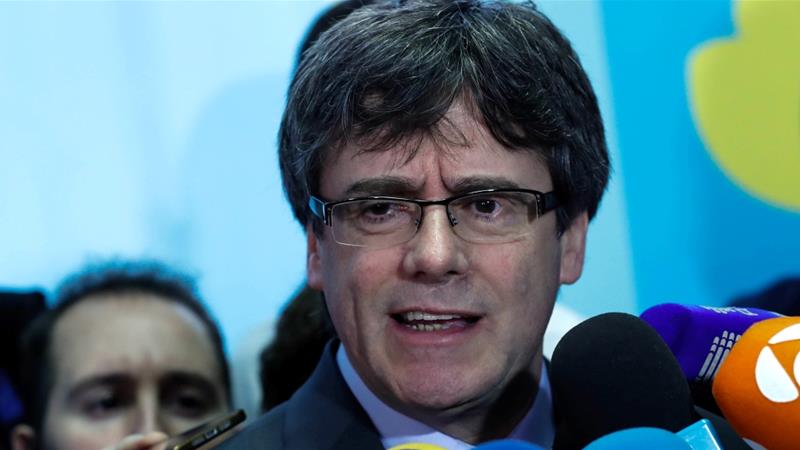 The move comes after the Spanish government’s Council of Ministers, headed by Rajoy, announced late Thursday night that it will attempt to block the nomination.

Puigdemont was president of Catalonia’s regional government until October, when the parliament declared independence from Spain after a disputed October 1 referendum on secession.

Spanish national police were mobilised to stop the vote and carried out a sometimes violent crackdown on voters, which rights groups called “excessive force”.

After a month of political brinksmanship between Spain and the breakaway region, the central government enacted Article 155 of the Spanish Constitution, allowing it take control of Catalonia’s government.

Puigdemont and 12 of his ministers were sacked and charged with various crimes. His former vice president, Oriol Junqueras of the Catalan Republican Left, remains in prison.

Detractors of the Spanish government’s actions in Spain and the European Union have called on Spain to return to normalcy and allow Puigdemont to head the government.

Spanish Vice President Soraya Saenz de Santamaria said at a news conference that Puigdemont “intends to put his own candidacy” above the law, but “respecting the law is the start of normalcy”.

Rajoy called snap regional elections for Catalonia in December after assuming control of the government. The prime minister said new elections would return stability to the region.

Instead, a separatist bloc won an absolute majority.

Roger Torrent, the speaker of the Catalan parliament who announced Puigdemont’s nomination on January 22, said the former president’s candidacy “meets all the legal requirements and has absolute legitimacy”.

Puigdemont’s party, Together for Catalonia, has announced it plans to file a criminal complaint against the Spanish government’s Council of Ministers.

They allege the Spanish ministers are using intimidation to block a politician from exercising his duties.

Spanish police have reportedly been on high alert on the northern border with France in anticipation of Puigdemont attempting to sneak back into Spain.

The Catalan parliament is set to vote on the Catalan presidency by January 31.