People trying to get home for Christmas or doing some festive shopping have been dealt another major blow as South Western Railway has cancelled services, adding to already existing travel chaos.

Workers on some of the busiest rail services in the country are to strike on the Saturday before Christmas in the long-running dispute over guards on trains, adding to the long list as Virgin, Greater Anglia, TfL, London Overground and Northern and Southern Rail announce service cutbacks.

The Christmas period now represents a 12-day network shutdown of rail services up and down the country with the capital badly affected.

In the latest development, an RMT union spokesman blasted South Western, which is ‘hell bent’ on not using security on their services, instead preferring a driver only option. 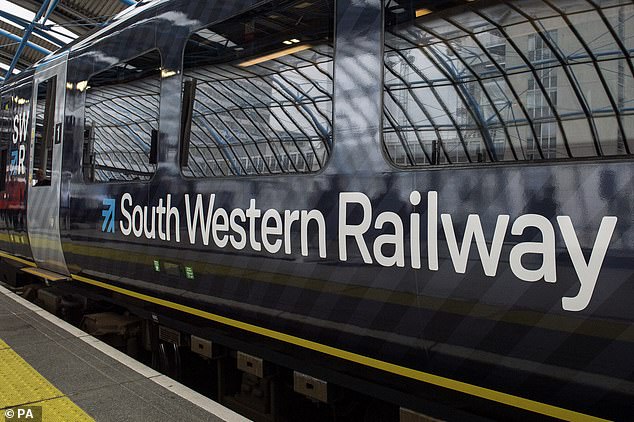 RMT members on South Western Railway working as Commercial Guards, Guards and Train Drivers have been instructed to not to book on for any shifts from the 22nd of December

An official petition started by the union to keep guards on trains currently has 26,164 signatures.

Members of the Rail, Maritime and Transport union (RMT) on South Western Railway (SWR) will walk out on December 22, causing the latest travel misery for festive shoppers.

The company, which has been hit by a series of delays in recent weeks because of signal and train failures, runs services into London Waterloo, the busiest station in the UK. 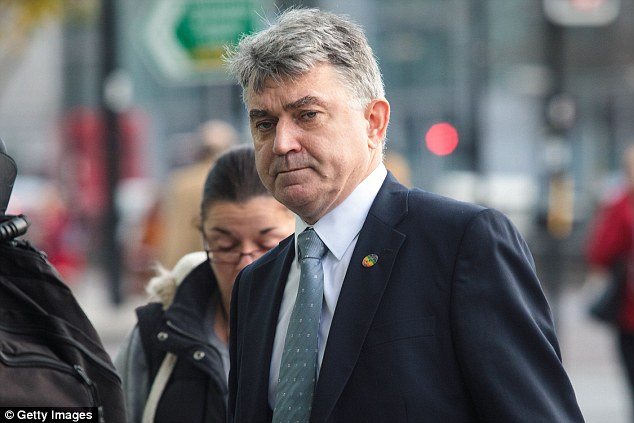 Services that will be affected by the strike include the Bristol, Exeter, Southampton, Bournemouth, Guildford, Bath, Salisbury, Reading and Isle of Wight services among several others.

RMT general secretary Mick Cash said: ‘South Western Railway continues to refuse to resolving this dispute, which is about safety, security and access while the company look to open up a loophole that would allow them to run driver-only services at their discretion.

‘Recent figures have shown a shocking a surge in violence on our railways. It is frankly appalling that South Western Railway are looking for a green light to throw the guard off their trains as and when they see fit in the name of profit. 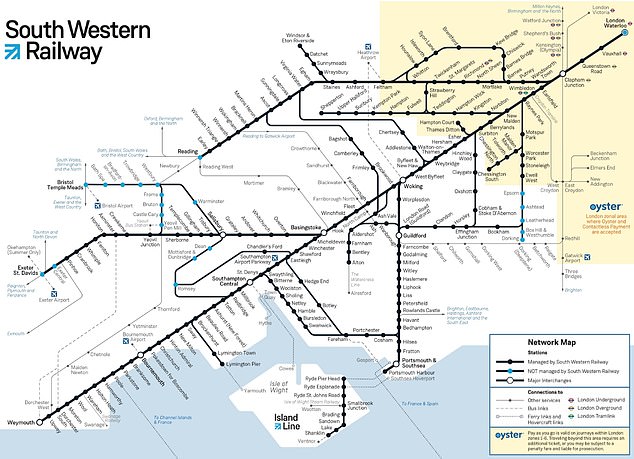 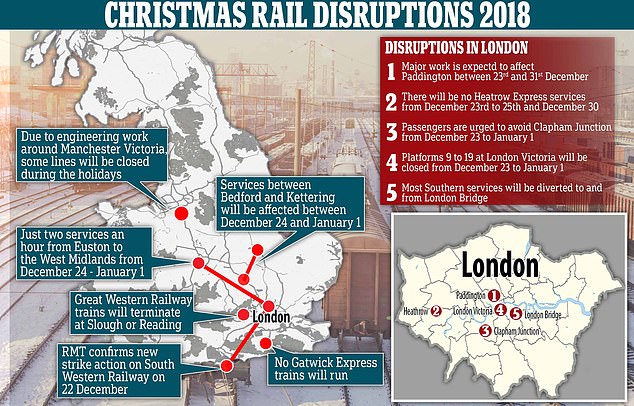 Services to / from London Euston will be reduced, with two per hour running between London Euston and West Midlands / Manchester Piccadilly.

The 4.40pm London Euston to Edinburgh service will be diverted to run to Glasgow Central instead of Edinburgh.

From 9.15pm on Monday December 24 until the end of service, trains will be diverted to run via Warrington Bank Quay, and will not call at Runcorn.

‘SWR might think it’s acceptable to play fast and loose with passenger safety, security and access but RMT members, who have stood firm throughout this dispute despite appalling harassment from the company, will not accept a dilution of the safety regime on the railway.

‘There’s a simple solution to this dispute and it means SWR stop playing with words and negotiate the guard guarantee that reflects the safety values of the agreements RMT has pinned down in other parts of the rail industry.’

RMT members on Arriva Rail North are striking for 24 hours on every Saturday for the rest of the year in the same dispute.

Commuters in London are now facing Christmas and New Year travel chaos in one of the biggest ever rail shutdowns over the festive season.

It follows delayed engineering projects and the launch of new trains and services after ‘unprecedented’ investment.

Some of the improvement work will begin on December 23 – the last working day before Christmas – to give engineers ‘three clear days to make uninterrupted progress’.

This begins alongside the newly announced strike of the RMT union.

Network Rail insisted there will be less overall disruption than during the 2017 festive period because most of the engineering work has been scheduled for when no trains are planned to run, such as on Christmas Day and Boxing Day.

A number of lines serving London’s major stations and airports will be blocked.

Major engineering work is taking place in the London Liverpool Street / Stratford area, as well as at other points on the Greater Anglia network on Christmas Eve

An hourly Greater Anglia service will run between:

Buses will replace trains between Ingatestone and Newbury Park Underground station via Shenfield.

Valid tickets can be used on London Underground services between Newbury Park and London Liverpool Street.

All Greater Anglia services will shut down earlier than usual, around 9pm.

Major work is expected to affect Paddington between December 23 and December 31.

Nearly all routes into Paddington – which includes Heathrow Rail and Heathrow Express services – will be cancelled or heavily reduced from December 23 to New Year’s Day.

From December 23 to 25 and on December 30 there will be no Heathrow Express services, while Great Western Railway trains will terminate at Slough or Reading.

Passengers are urged to avoid Clapham Junction from December 23 to January 1. It will be exceptionally busy because platforms nine to 19 at London Victoria will be closed.

No Gatwick Express trains will run, while most Southern services will be diverted to and from London Bridge and Blackfriars.

Southern rail routes from December 22 to January 2 will be disrupted as work will be carried out to replace worn out track near Victoria.

East London will also be affected, with engineering work being carried out between Liverpool Street and Stratford.

No TfL Rail services will operate between London Paddington and Heathrow.

Shenfield and Newbury Park via Chadwell Heath. Romford to Stratford calling at all stations except Maryland.

And the major hub of Euston is facing a reduction in services, with timetable changes to the London Overground’s Watford line and Virgin Trains to Scotland and the Midlands.

Track improvements between Bedford and Kettering as part of the Midland Main Line Upgrade will also affect timetables from December 24 to January 1.

The prospect of Christmas disruption comes as rail regulator The Office of Rail and Road said ‘risks and uncertainty’ remain despite a major rise in spending during the five years from April next year.

Stations and lines serving much of the capital will be closed throughout the holiday break for up to 12 days, including those with direct links to Heathrow and Gatwick.

The last ‘Night Riviera’ Sleeper service from Paddington to Penzance will run on December 21, and will then not restart until New Year’s Day.

All so hitting commuters during the Christmas period is the ongoing work on he Bristol mainline.

No services will run between Romford and Upminster on Christmas Eve

Valid tickets can be used on London Bus route 370.

London Overground services will stop earlier than usual, with services reduced from 20:00, with the last trains running around 21:30.

Work to electrify lines between Bristol Parkway and Newport will be taking place over the festive period.

Coaches will replace trains between Bristol Parkway and Newport and in addition, upgrade work will be taking place in the Westbury area affecting services to and from the South Coast on December 27 to Monday December 31.

Many services leaving London will stop running at around 9pm on Christmas Eve.

There are no rail services across the UK on Christmas Day and few on Boxing Day.

Major improvement work at London Victoria from Saturday 22 December to until 04:00 Wednesday 2 January

All Gatwick Express / Southern routes from / to London Victoria

Most trains will divert to run to / from London Bridge.

No Gatwick Express services will run. Trains to and from Gatwick Airport will run from other central London stations including Blackfriars and London Bridge.

Southeastern trains are not affected by this engineering work.