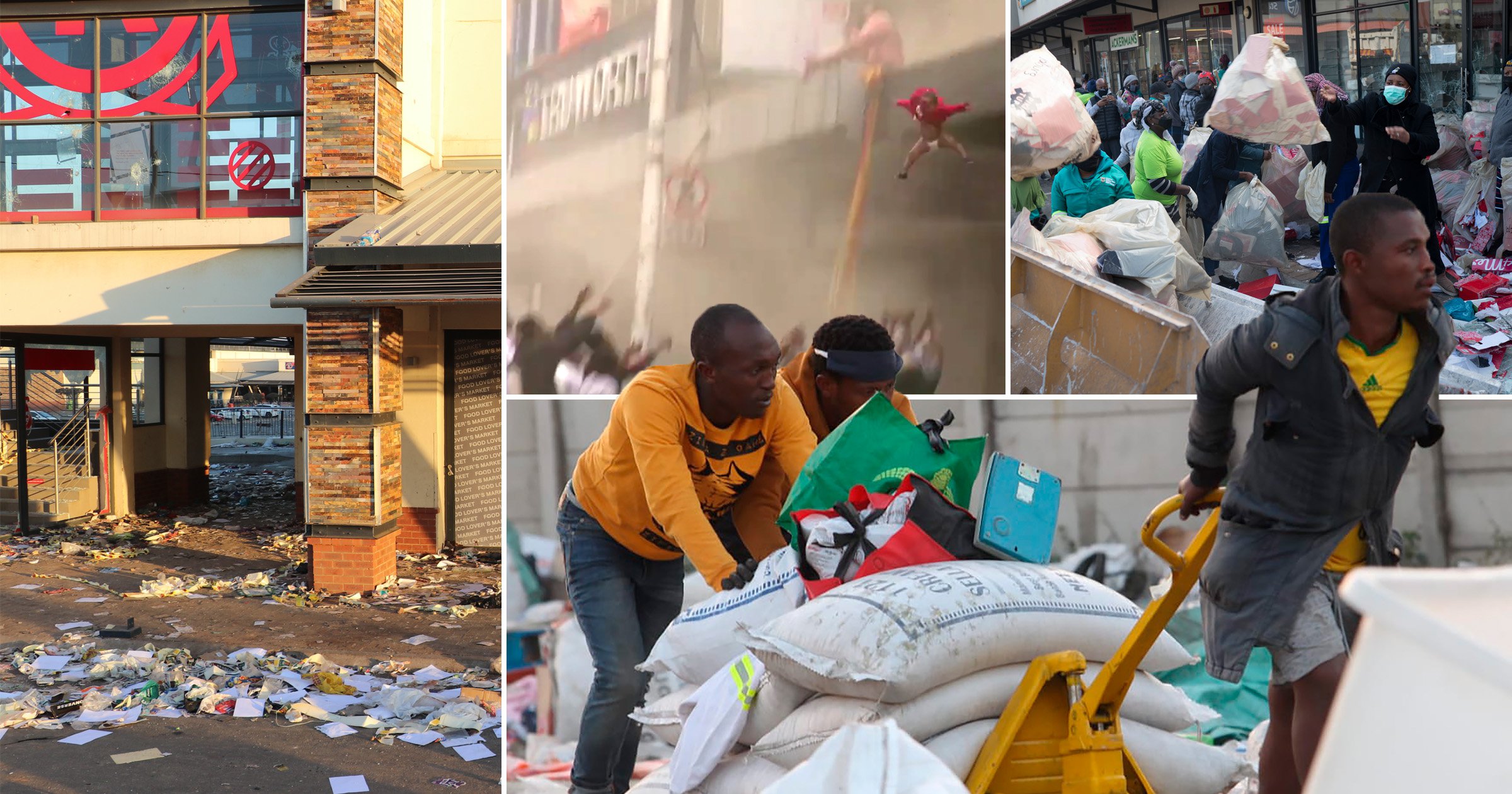 The arrest of former president Jacob Zuma has triggered violence which has completely wrecked parts of South Africa.

But those on the ground hope ‘something positive will rise from the ashes’.

The international media has been riddled with shocking reports of decimated cities, a mum throwing her toddler out of a burning building to save her life and more than 100 people being killed in violent clashes.

While this chaos has devastated the people affected, locals told Metro.co.uk the looting is the symptom of the country’s struggles, not the cause.

They agree that ‘people have lost hope’ and ‘South African politicians don’t seem to care’.

The unrest ‘should serve as a warning to say if nothing happens, people are going to rise even more and that’s a situation that no one wants to see,’ said Mr Ndaba, from the Durban township of KwaNdengezi.

Mr Vilakazi said: ‘This thing is not really over unless we intervene with poverty, unemployment and corruption.

‘I hope the government is scared. They should be scared. And hopefully it will make them prioritise the country.’

Mr Vilakazi. from Soweto, near Johannesburg, is losing out on rent payments because one of his tenant’s restaurants was looted on Tuesday.

He said: ‘My tenant has to restock, has to fix whatever was broken. He has a family to feed and he has invested a lot into his business. He already has rent owed from last year because of Covid, now it will be more.’

Mr Vilakazi believes the government needs to fix unemployment, poverty and inequality to save his community.

‘This is a cry for a voice. This thing is going to come back. People have tasted a little bit of power,’ he said.

Mr Ndaba, 53, echoed similar thought when he explained: ‘People have lost hope. The government has not helped in any way to improve people’s lives, particularly the youth.

‘I think (politicians) have not concentrated on the key aspects of improving lives and then you see them in cahoots with big business, getting rich all the time.

‘People live in abject poverty everywhere you go. Their life has not changed since apartheid, instead it’s gotten worse and worse, and now they have nothing to lose.

‘People are just angry and they’ve lost hope and something drastic has to be done. This is just the beginning if nothing changes.’

The man, who travels around the country for work, told of a family of 11 who are living in a four-bedroom house in the township of Gugulethu, near Cape Town.

The family has built a shack in their back garden to accommodate their relatives who all try to feed the children but not a single one of them is able to find work.

This is the life of the 7.2 million South Africans who are currently not employed, according to Statistics South Africa.

The businessman said Jacob Zuma’s arrest may have triggered the current chaos, but the country has been ‘sitting on a time bomb for quite some time’.

South Africa, which the World Bank considers the most unequal society on the planet, has been grappling with unemployment and poverty since the end of white minority rule in 1994.

A staggering 75% of all South Africans between the ages of 15 and 24 are unemployed and not in education.

Ironically, these are the people who have been dubbed the ‘born frees’ – as the country’s first generation to grow up outside of apartheid.

Mr Ndaba said: ‘Generally South Africans, irrespective of colour, are a nice people. But all these situations create an element of not trusting each other, especially considering our past.’

Both Mr Vilakazi and Mr Ndaba believe the solution is ‘drastic change’, with the latter calling for ‘younger, fresher ideas’ to fix the country.

He said: ‘We hope that the government will stop being arrogant like it has been and implement the necessary changes, particularly in terms of creating jobs and redistributing the economy equally – not to cronies and those who know people in higher places.

‘This should inspire the government to speed up the process of change.’