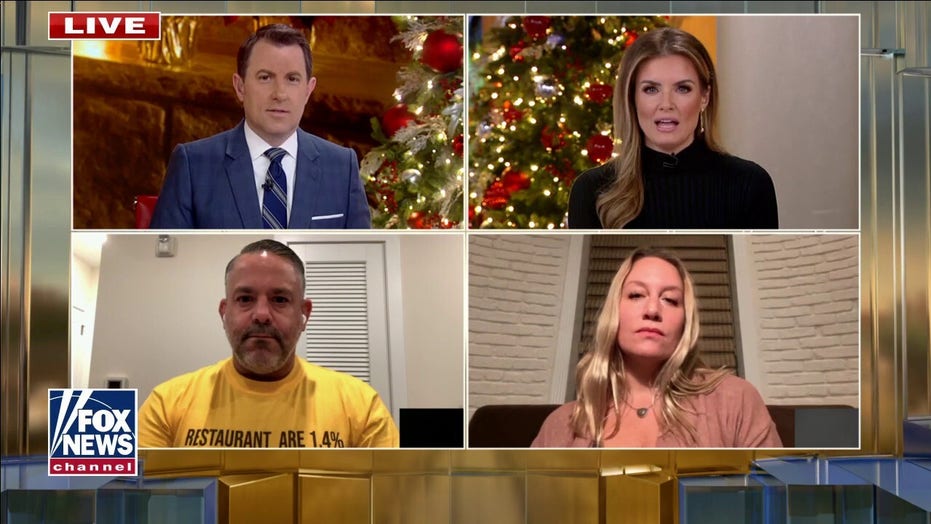 Owner of Mon Amour Coffee and Wine Jeffrey Garcia and owner of Harlem Public Lauren Lynch weigh in on the protests.

New York City restaurants owners are considering banning Gov. Andrew Cuomo and Mayor Bill de Blasio from eating at their establishments — a move to hit back against the latest restrictions banning indoor dining during the frigid winter months as well as constantly shifting rules during the coronavirus pandemic that have forced business owners to pay out of pocket with little government assistance.

Michael Quinn, whose family owns Coney Island’s famous Feltman's hot dog brand, told Fox News thousands of restaurants were contemplating the ban to give "a taste of their own medicine" to politicians, whom he says have enacted restrictions that go against science. Less than 2% of cases can be traced to indoor dining, compared to the 70% traced to households and small gatherings, according to New York state.

Though he does not currently own a restaurant, Quinn – a lifetime New Yorker from Brooklyn – started the Facebook group "NYC Restaurants Open" in March to create a space for business owners to communicate. Describing himself as a liberal Democrat who voted for Cuomo, Quinn said he did not create the group to be political — but now the governor and mayor have gone too far.

"I came up with this motto — if we can’t feed our families, we certainly won’t feed yours," Quinn said. "These people need to survive and they spend thousands of dollars doing what they need to do. They’re just not going to make it. And it’s not about politics at this point — whether you’re left or right or conservative or Democrat. It’s economic Darwinism at this point. It’s survival of the fittest." 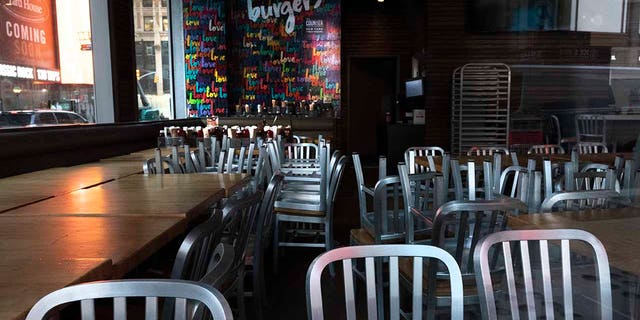 The Counter restaurant is closed for indoor dining, Tuesday, Dec. 15, 2020, in New York. A ban on indoor dining at New York City restaurants was enacted Monday by officials trying to slow the resurgence of the coronavirus. (AP Photo/Mark Lennihan)

The move to ban indoor dining, according to Quinn, only increases the likelihood people will gather in private settings; meanwhile, restaurants have invested thousands of dollars in new ventilation systems, plastic shields and barriers, personal protective equipment, sanitation and other measures to ensure their dining rooms can safely welcome members of the public during the pandemic.

"The mayor and the governor closed down indoor dining," Brandon Fraye, the owner of Pasta by Hudson, told Fox News. "They cost us money. We have food that goes to waste. A case of gloves costs us almost $100 depending on which gloves you’re buying, and I’m going through five boxes a day just to make sure I’m incredibly careful.

"To make sure my community is safe, my staff is safe. We follow every rule we can to make sure we are preventing transmission and at the same time earning a living to try to make it to next year."

Fraye said that despite supporting his colleagues in the restaurant industry, he does not agree with a ban against Cuomo or de Blasio, simply because he is desperate to get any type of business he can get. His first location near Columbus Circle has been closed since March due to a lack of foot traffic through the underground market during the pandemic, while his second location in Chelsea remains open for takeout.

"It was hard enough to survive with just a limited capacity — they threw us a bone and said oh, you can operate at 25%," Fraye explained. "That’s not enough to cover your labor, your food costs, supplies and the bag the food goes into. You know I used to have 15-20 employees at my old store, and I’m down to five to seven." 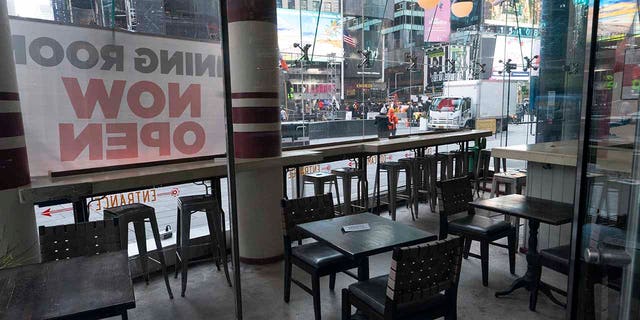 Dos Caminos restaurant is closed for indoor dining, Tuesday, Dec. 15, 2020, in New York. A ban on indoor dining at New York City restaurants was enacted Monday by officials trying to slow the resurgence of the coronavirus. (AP Photo/Mark Lennihan)

Cuomo on Tuesday granted restaurants where indoor dining has been suspended a temporary reprieve, postponing the sales tax deadline until March 2021 — a move that Quinn says is too late for the restaurant industry in desperate need of grant funding, not loans.

"Let’s fight the virus and not be hostile towards these small business owners who do hire minorities and middle- to lower-class people who are really suffering during this time period," Quinn said.

As of last Friday, New York City customers may order and pick up food inside of an establishment until 10 p.m. After that cutoff, orders must be placed by remote means over the phone or internet, and pickup should be curbside outdoors, through a window or other similar outdoor means, according to a memo released by the mayor’s office.

Fraye argued the restaurant industry, in particular, has followed stringent safety protocols even before the pandemic to prevent the transmission of salmonella, among other pathogens, and should therefore be allowed open. He said that he doesn't earn as much using third-party services, such as Uber Eats or Doordash, and sticks to taking orders through his website.

"Give us something to give us a fighting chance to really stay alive — when I talk to other restaurant owners and people in the business, there’s a lot of us that look each other in the eye and say, ‘We’re not going to be here next year,’" Fraye said.

"I spoke to a bunch of people saying, ‘I’m just going to try to make it to the end of the year,’ and see if it looks like it’s going to turn a corner and get better, but now we all see that it didn’t turn a corner for the restaurant industry, it actually did an about-face and jumped off a cliff."