A British Army soldier has been convicted of scalding a colleague’s privates by throwing boiling water over him after he stole a slice of his Domino’s pizza.

Sapper Christian Dinsmore suffered ‘blistered second degree burns to his groin and scrotum’ and was in hospital for three days.

A court martial heard Sapper Samuel Webster had turned up at Sapper Dinsmore’s room in barracks wearing a ‘white mouth guard’ and holding a ‘large mug’ of boiling water.

After repeatedly banging on the door, Spr Webster threw the mug at Spr Dinsmore, who was wearing only boxer shorts, before kicking him in the face – shouting ‘that will teach you’.

The pair had fallen out while on guard duty during the evening of March 27, 2020, at Swinton Barracks near Tidworth, Wiltshire.

Spr Webster, of 26 Engineer Regiment, had ordered a Domino’s Pizza, leaving what he says was ‘around three quarters’ of the pizza in the guard room before he went back on duty. 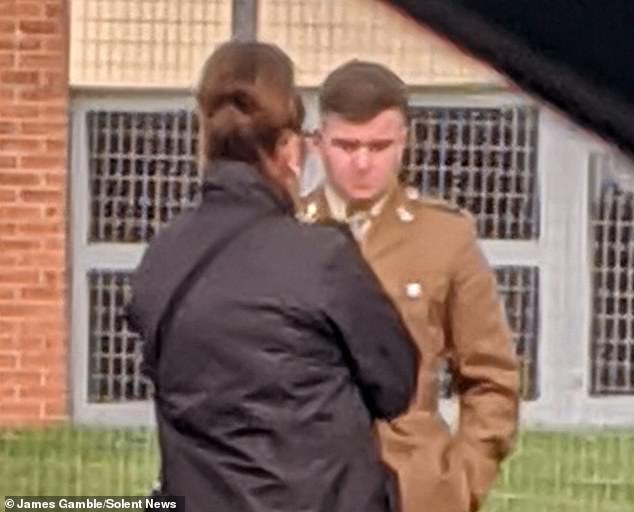 But Spr Dinsmore, from Northern Ireland, then helped himself to a slice.

When Spr Webster returned to find a missing slice, he confronted Spr Dinsmore, asking him to pay for the slice he had taken, but was allegedly told to ‘f*** off’.

Spr Dinsmore told the court: ‘At about 22:30 I finished my guard duty on the gate and went into the guard room.

‘I was told there was pizza so I had a slice and laid down on the sofa and went to sleep.

‘At about one in the morning I was woken up by Spr Webster. He asked if I had eaten his pizza and I said yes.

‘Nothing more was said – I just went back to sleep until my next guard duty.. I finished at around 06:50 the following morning and Spr Webster relieved me of my duty.

Spr Dinsmore was awoken at around 1pm later that day by someone knocking loudly and repeatedly on his door.

He said: ‘I didn’t answer the door at first but the knocks became increasingly louder…

‘I opened the door in my boxers and Spr Webster was standing there with a white mouth guard in his mouth and a large mug in his hand.

‘There was boiling water in the mug and he threw it at my right thigh and groin.

‘He came into my room and I fell over. I tried to get up but he kicked me in the head and knocked me down again.

‘I managed to get up and put my hands up to protect my face… I thought if I didn’t do something things were going to get a lot worse for me.

‘He hit me on the nose and I punched him back, walking him down and out of my room. I closed and locked the door and he said something along the lines of, ‘that will teach you’.’ 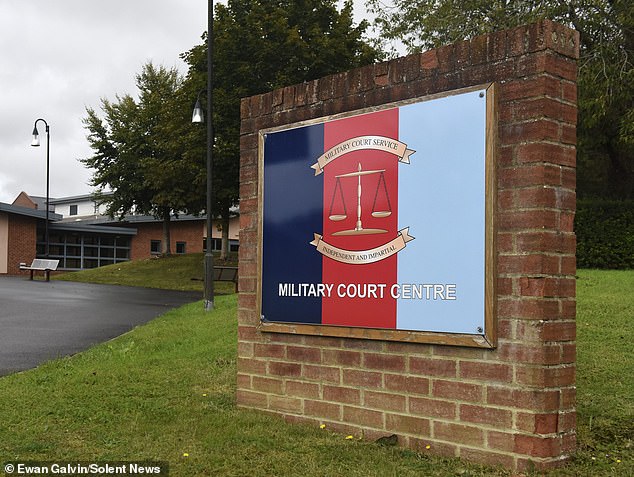 Spr Dinsmore phoned his father in Northern Ireland who called the Royal Military Police while the soldier took a cold shower on the advice of a colleague he had also called to his room.

Bulford Military Court in Wiltshire, heard Spr Webster had previously coached Spr Dinsmore on the regiment boxing team, and the pair had sparred together several times.

Spr Webster was convicted of a single charge of grievous bodily harm with intent, after denying the offence, insisting he did not throw the boiling water and had just gone to his room looking for payment for the pizza.

He claimed he had been carrying a mug of coffee and had accidentally dropped it over his colleague.

Spr Webster also suggested in his police interview that Spr Dinsmore, who has since left his former regiment to become a Rifleman, had taken a disliking to him after he ‘got the better of him’ when the pair sparred together.

Prosecuting, Captain James Farrant said: ‘Wanting money for this pizza was not the reason you went to see Sapper Dinsmore.

‘You decided to go to his room wearing a mouth guard, picked up a mug of hot liquid and were going to confront him.

‘Your account that you dropped the mug is a lie – you threw the fluid and it struck him on his leg.’

A sentencing date for Spr Webster has not yet been announced.