Smugglers are using Facebook groups called ‘immigration to Britain’ to lure migrants illegally into the UK on overcrowded boats for £10,000

Smugglers are brazenly using Facebook to offer migrants illegal routes to the UK for up to £10,000, it emerged yesterday.

The traffickers boast how they can help people from Africa and Asia reach Western Europe without being caught.

The Daily Mail found a range of illegal activity on Facebook – just hours after the tech giant said it had improved its security measures.

The social network has doubled its safety and security team to more than 30,000 staff and has invested in the latest technology to combat trafficking and other unlawful behaviour. 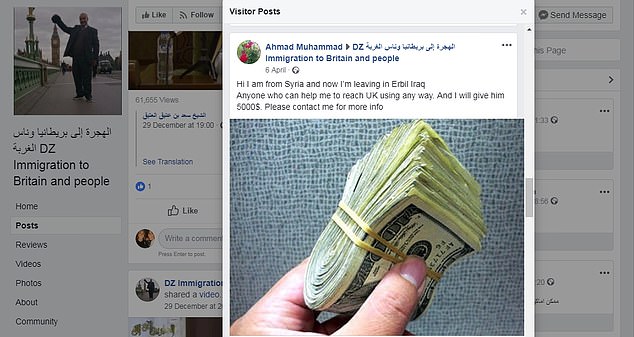 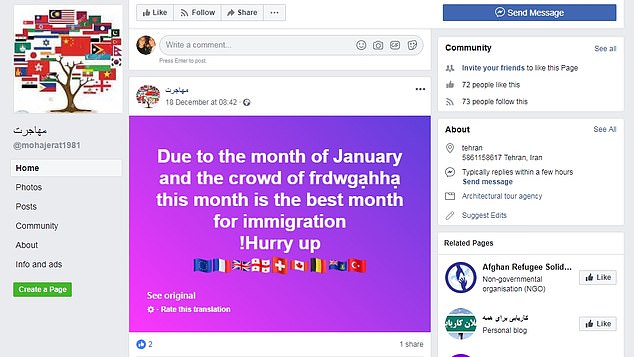 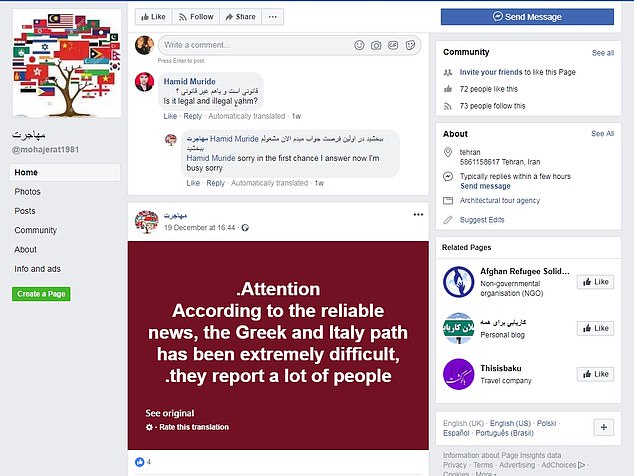 But illegal immigration operations can be found by carrying out simple searches on sections of the site which are open to the public.

The revelation comes after Sajid Javid performed a humiliating U-turn over the Channel migrant crisis.

After being forced to cut short his safari holiday, the Home Secretary bowed to pressure from Tory MPs and recalled two ships to the Channel.

French police have foiled another Channel crossing, stopping 14 migrants who were trying to steal a trawler.

Boat thefts in the ports of Calais and Boulogne-sur-Mer are increasing as migrants and people-smugglers resort to increasingly desperate measures to get into the UK.

At 9.30pm on New Year’s Eve, Iraqi migrants including a mother, her two children and at least two suspected traffickers were spotted on the Caprice Des Temps II by Boulogne’s harbourmaster.

Riot police who were in the area for New Year celebrations stopped them before the large vessel could be taken, but the two suspected people-smugglers fled before they could be arrested. The attempted boat theft is the latest in a series of similar incidents.

On December 23, 16 migrants were stopped in a stolen boat shortly after making it into the Channel from Boulogne, and in November, 17 migrants made it to Dover on a 39ft boat stolen from a port near Calais.

At least 139 migrants have been caught crossing the Channel over the festive period.

Calais harbourmaster Etienne Caron said: ‘The problem is that the migrants see the White Cliffs of Dover and they think it’s just a short distance away. But there are powerful tides and currents.’ 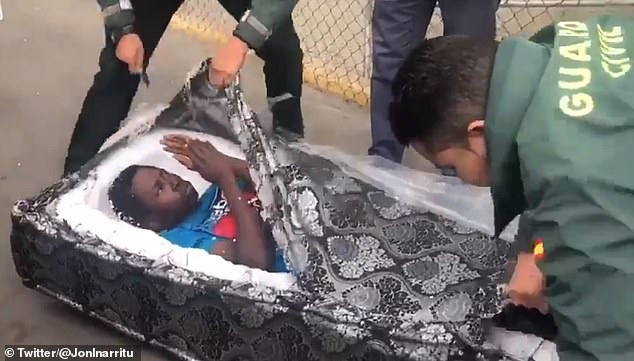 At least 139 migrants have been caught crossing from France over the festive period. Most are Iranians who are thought to have paid traffickers thousands of pounds per person for a spot on a dinghy.

Facebook has become a magnet for migrants who are willing to place their lives in the hands of organised crime networks to reach the UK.

One of the pages found is called ‘illegal immigration from Libya to Italy’ and offers places on poorly maintained fishing boats to cross the Mediterranean. It features a picture of a boat packed with migrants.

Another is called ‘immigration to Britain’ and contains pictures of Big Ben and the Houses of Parliament. There is a picture of a wad of banknotes under a discussion about reaching the UK from the Middle East.

A stowaway migrant has been detained after reaching the Isle of Wight hidden on a tourist coach.

Police were called to the island’s ferry terminal where the man was discovered hidden in the luggage compartment of the vehicle which had recently returned from Austria via the Channel Tunnel.

It is understood the migrant was spotted by the coach’s driver, shortly after 8pm on Friday night as passengers disembarked.

An Isle of Wight Police spokesman confirmed a man had been arrested on suspicion of an immigration offence and said the case was being handled by the UK Border Force.

Brenda Hall, a passenger on the coach, said: ‘We stopped as soon as the first passengers got off at Fishbourne ferry terminal and their cases were taken out.

‘The driver could see there was someone in there and the police came quickly, took the man away and searched the coach to make sure he was the only one.’

One migrant, who calls himself Mo Khalefah, openly asked smugglers to ‘get him out of oppression’.

He posted a picture of himself wearing a life jacket, surrounded by other migrants, on a boat on the Mediterranean in the summer. He now claims to have reached France.

One trafficking group appears to be operating from the Iranian capital Tehran. The Facebook page states: ‘We can help people who want to migrate through legal or illegal means to claim asylum. People who don’t have a passport or don’t want to travel on their own passports can be provided with another one.’

It offers a list of countries to which it can take migrants, with a price alongside each one. The group offers travel to the UK for £6,000. Elsewhere the Mail found Facebook pages where traffickers were demanding £10,000 for a ‘guaranteed’ route to the UK. The discoveries come after the UN’s migration agency warned that Facebook is letting smugglers lure migrants ‘to their deaths’ with promises of safe passage to Europe.

Leonard Doyle, of the International Organisation for Migration, said migrants were being ‘lured to Calais’ via social networks with few checks from the tech giants.

Mr Javid’s U-turn came after he previously resisted calls to bring more boats to the Channel amid concerns they would act as a magnet for migrants.

HMC Searcher had been the only cutter patrolling the area for illegal immigrants. Charlie Elphicke, the Tory MP for Dover, voiced his support for the move, saying: ‘I am delighted Sajid Javid has listened and is bringing two more cutters to the English Channel.’

Speaking after a meeting on Monday with senior officials from the National Crime Agency and Border Force, Mr Javid said: ‘This incident around the Channel remains a very serious concern to me, that’s why I declared it as a major incident a few days ago. 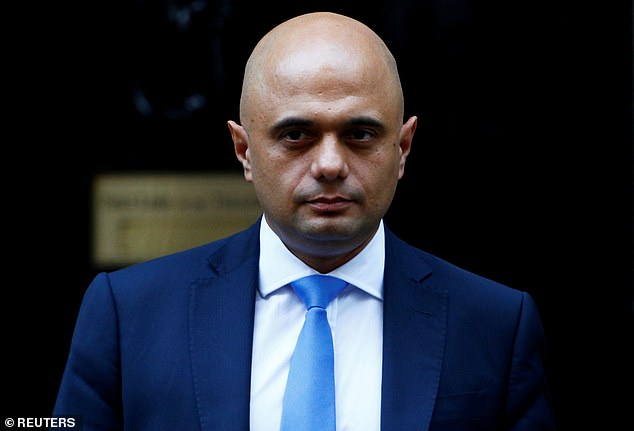 Regarding activity on its site, Facebook said: ‘People smuggling is illegal and any ads, posts, pages or groups that coordinate this activity are not allowed on Facebook. We work closely with law enforcement agencies around the world including Europol to identify, remove and report this illegal activity.’

The HMC Searcher has been criticised for deactivating its tracking systems after Border Force officials feared migrants were using an app to locate and avoid the vessel.

Maritime experts said the move risked collisions in the Channel because other boats would not be able to detect it.

Men tried to slip into Europe inside mattress

His expression says it all – this African migrant’s unusual attempt to sneak into Europe hidden in a mattress has failed.

He and another stowaway were sewn into two mattresses, which were then strapped to the roof of a van.

It is thought to be the first time this method has been tried. However, they were discovered when guards at the border crossing from Morocco to the Spanish enclave of Melilla became suspicious.

Video footage shows the extraordinary moment at the checkpoint when the two men emerged on Sunday after Spanish police cut through plastic wrapping and fabric to find them. They are each said to have paid a trafficker £4,000 to attempt the crossing.

The driver of the van fled into Morocco when officers asked to inspect his cargo. His hidden passengers were taken to a migrant holding centre. Footage of their discovery was tweeted by Spanish senator Jon Inarritu, who wrote: ‘As long as there are no safe routes to request asylum, situations like this will continue to occur.’

Melilla and Ceuta, a second Spanish enclave in Morocco, have Europe’s only land borders with Africa. The UN said more than 5,000 migrants entered Melilla last year.

Spain became one of the main entry points for migrants to Europe after other EU nations tightened their borders. The UN claims more than 62,000 migrants arrived in Spain in 2018 after crossing the Mediterranean.