High-achieving students at certain schools are getting “life-changing” cash prizes of up to $10,000 for impressive VCE results, but some education experts question the ethical merits and effectiveness of the financial incentives.

A number of low-fee independent schools, including Mount Hira, Minaret, Sirius and Al-Taqwa colleges, are among those giving thousands of dollars in incentives or rewards to students who receive high ATARs. 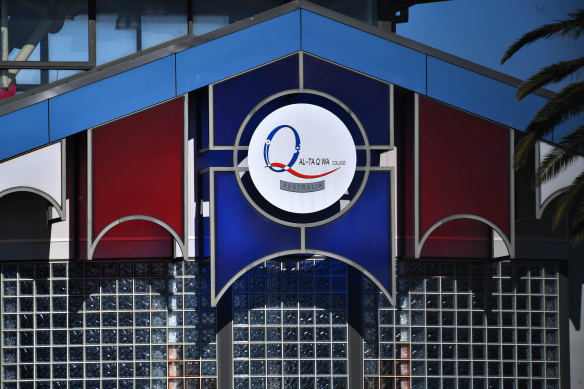 Al-Taqwa College is among the private schools which offer cash incentives to their students who achieve high ATARs.Credit:Joe Armao

Islamic school Mount Hira College in Keysborough offers university scholarships of up to $10,000 to top-scoring students while students who get between 90 and 94 can get a gift vouchers valued at $1000 or $2000.

Minaret College, another Islamic school, offers $10,000 to its students who receive the highest ATARs. Sirius College offers VCE achievement awards of $5000 for students with an ATAR of 99 or above and $2500 for the top score in the state for any VCE study.

Al-Taqwa vice principal Mohammad Hallak said the college had provided financial rewards to top students for years, with the funding coming from the school’s non-government income and a wider program of scholarships and student support.

“We see the financial rewards as just that – rewards. They simply reward outstanding performances and are not intended as incentives as such. There’s far greater incentive for students in their doing as well as they can to shape their own futures by getting into the course of study or vocational training they most want,” he said.

Principal Omar Hallak said the Islamic college achieved one of its best years of results with the ATARs released this week. Of the 68 VCE students at the Truganina school, nine achieved an ATAR above 90 and a further six were ranked above 80. The school’s dux received an ATAR of 98.25.

“It is a tribute to the commitment and resilience of our students and the support of their families,” Hallak said.

Al-Taqwa student Manhal Muhiyadeen, 17, was shocked when he saw he had landed an ATAR of 95.85, and is now planning to study business at RMIT. “I was not expecting it [such a high score] whatsoever,” he said.

He credited his high mark to the “blood, sweat and tears” of his teachers and the school’s accelerated learning program and practice exams with external markers.

Muhiyadeen said the reward money was a great incentive for some students. “They live, eat and breathe the incentives,” he said.

“For some students, the money is life-changing. For other students it’s a nice bonus; it’s a reward for the year.”

He plans to save his reward and see what he can do with it in the long term.

Educational psychologist Kate Crosher said that, on the surface, providing an incentive as motivation had merit.

“It’s going to target some young people, so considering that, a fairly substantial cash sum sounds like it could be quite good,” she said.

But she said the cash prizes weren’t equitable, and many schools could not offer them.

“There are a range of kids who will never be able to achieve that. What do we value – high achievement rather than effort?” she said.

She said it raised ethical and moral issues and could put extra pressure on the student.

“I think it’s going to be really variable [in value],” she said.

“There’s a whole bunch of values over whether money should be an incentive. It’s a very external incentive. It puts it outside the child, rather than reinforcing internal motivation.”

Sally Sadoff, Simon Burgess and Robert Metcalfe, researchers of the peer-reviewed Economics of Education Review who surveyed 10,000 UK high school students, found that for high-achieving students, financial incentives may provide little further motivation but could impact others who weren’t innately motivated. They suggested that non-financial rewards may be a more cost-effective way to raise results.

Gary Marks, honorary principal in sociology, social and political sciences at the University of Melbourne, said the students who received the cash prizes would likely be high-achieving students anyway. It was likely “icing on the cake” for them.

“They’d do pretty well without the cash incentive,” he said.