‘You are the son we lost, and your rest is ours’: Poet laureate Simon Armitage writes poignant tribute to the Unknown Warrior 100 years on from World War I

Poet Laureate Simon Armitage has written a moving tribute to mark the 100th anniversary of the burial of the Unknown Warrior.

He will read his poem The Bed – the title is a metaphor for the anonymous soldier’s grave – at a televised Armistice Day service at Westminster Abbey today.

Mr Armitage, 57, said yesterday: ‘The poem tells the story of the retrieval and repatriation of the body of the Unknown Warrior from the battlefields of World War I to his grave in Westminster Abbey.

‘I was very struck by the ritualistic detail that had gone into the making of the coffin and the tomb, and thought of it as a bed, somewhere to rest in peace. 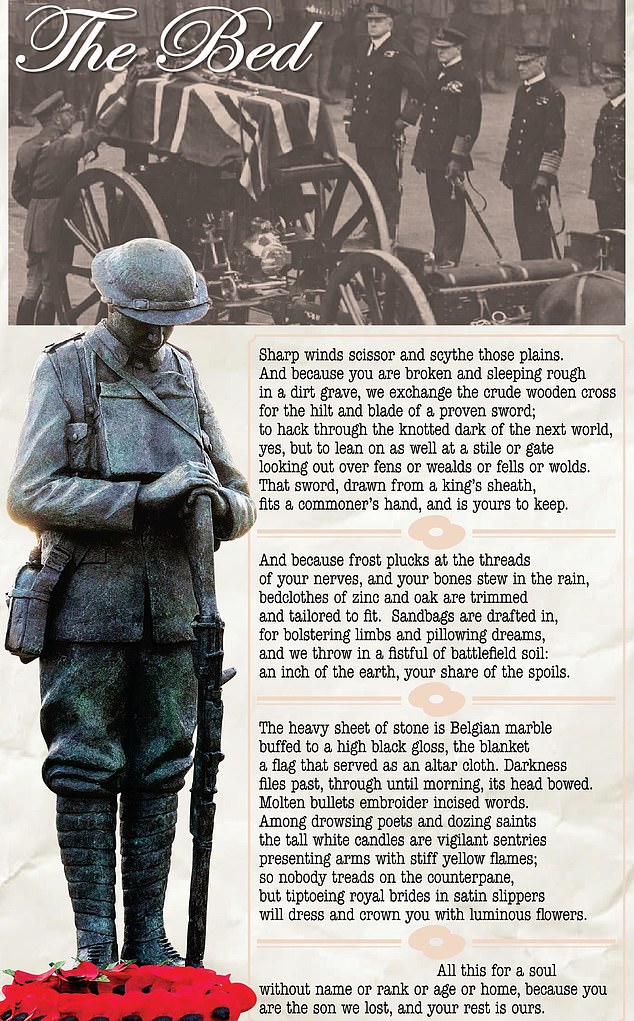 Poet Laureate Simon Armitage, 57, will read his poem The Bed – the title is a metaphor for the anonymous soldier’s grave – at a televised Armistice Day service at Westminster Abbey

‘His anonymity makes him everyone’s son, everyone’s responsibility, and the poem concludes that we owe him his rest, because our restfulness was paid for with his life.’

He has previously written a sequence of poems inspired by panoramic photographs of battlefields associated with the Battle of the Somme.

The Bed reflects on how the Unknown Warrior was ‘broken and sleeping rough in a dirt grave’ with a ‘crude wooden cross’ before he came to be buried ‘among drowsing poets and dozing saints’ in the abbey.

It tells of how ‘tiptoeing royal brides in satin slippers will dress and crown you with luminous flowers’ – a reference to the tradition of royal brides sending their bouquets to rest on the Warrior’s grave which was started by the Queen Mother at her marriage to the future George VI in 1923.

She laid her flowers in memory of her brother Fergus, who was killed in 1915 at the Battle of Loos.

Mr Armitage, ends his poem with the poignant words: ‘All this for a soul without name or rank or age or home, because you are the son we lost, and your rest is ours.’ 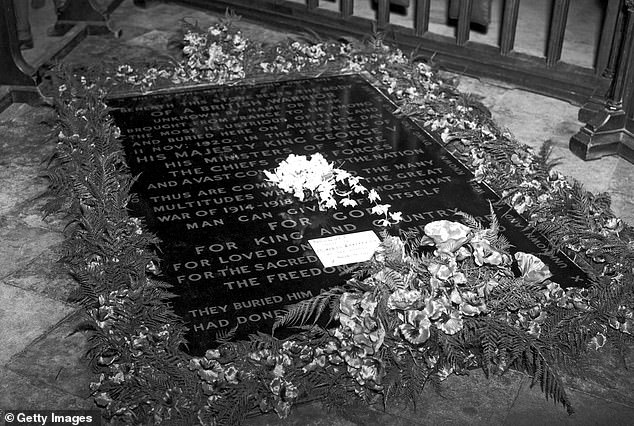 The grave of the Unknown Warrior symbolises all those who died for their country in the Great War but whose place of death was not known or whose body remained unidentified.

It was inspired by the Rev David Railton, who, while serving as a chaplain on the Western Front during the First World War, saw a grave marked by a rough cross and a pencil-written note saying: ‘An Unknown British Soldier.’

He subsequently wrote to the then Dean of Westminster, Herbert Ryle, with a proposal for a memorial to the fallen with no known grave.

His idea drew support from George V – the Queen’s grandfather – and the then prime minister David Lloyd George. The body was chosen from four unknown British servicemen exhumed from four battle areas and transported back to Britain. 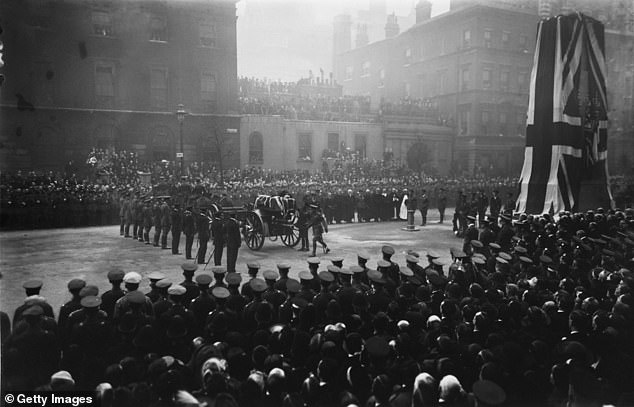 King George V places a wreath on the flag-draped coffin of an unidentified British soldier in November 1920, ahead of the soldier’s burial in the tomb of The Unknown Warrior

It was brought from Northern France and buried on November 11, 1920, two years to the day after the First World War ended. The grave, which contains soil from France, is covered by a slab of black marble from a quarry in Belgium.

The Padre’s flag, the Union flag given to the abbey by Mr Railton and which covered the Unknown Warrior’s coffin at his funeral, will play a central role in today’s commemoration.

The Prince of Wales and the Duchess of Cornwall are expected to join the service, which will be shown on BBC1 from 10.30am.

It will include an address from the Archbishop of Canterbury Justin Welby.

The Queen, who was advised not to attend the service because of the coronavirus pandemic, commemorated the 100th anniversary of the interment of the Unknown Warrior last Wednesday.

The 94-year-old monarch requested a private pilgrimage, at which she was seen wearing a face mask in public for the first time.