After four tumultuous years under Donald Trump, Joe Biden was sworn in as the 46th President of the United States, calling for unity and declaring that “democracy has prevailed.” Here are some highlights from yet another history-making day in America. 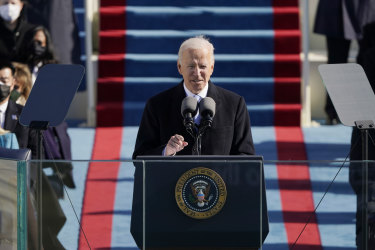 Eugene Goodman: Two weeks ago, he was a lone Capitol Police Officer staring down an angry mob of pro-Trump rioters. Today, Eugene Goodman had the honour of escorting new Vice-President Kamala Harris at the inauguration, in his new role as acting deputy sergeant-at-arms.

Wearing a beige overcoat, brown shoes, and a black mask, the US official walked Harris and her husband Doug Emhoff to the Capitol stage where she was sworn in, and later helped to guard the pair as they escorted now former vice-president Mike Pence and his wife Karen to their motorcade after the ceremony.

Goodman, who is black, was hailed a hero this month after he appeared to lure a group of mostly white rioters away from Senate chambers where members of Congress and their staff were hiding at the time. 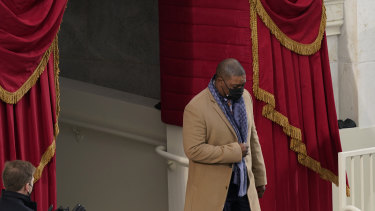 You can’t help but admire the way the progressive Democrat appeared to shun the traditionally formal attire of presidential inaugurations, opting instead for comfort and warmth. But the story behind those now famous mittens, outlined on Twitter by Buzzfeed’s Ruby Cramer, is equally endearing.

According to Cramer, a local Vermont teacher named Jen Ellis made the mitts – from repurposed wool sweaters and fleece created from recycled plastic bottles, no less – and gave them to Sanders a couple of years ago.

Ellis was apparently surprised when Sanders (who was once Biden’s main rival for the Democratic presidential nomination) started wearing them on the campaign trail. Little did she know they'd soon become a meme. 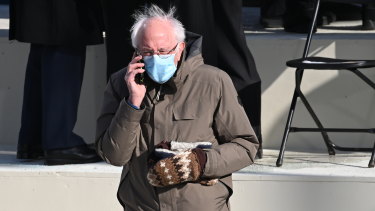 History-making Harris: There was something truly stirring about America’s first black female vice-president being sworn in by Justice Sonia Sotomayor – the first Latino woman to sit on the US Supreme Court – with her hand on a Bible that once belonged to civil rights icon Thurgood Marshall.

Then again, Harris has long been a barrier-breaker, so it's little wonder her inauguration was peppered with plenty of symbolism. Accompanied by her husband Doug Emhoff – the nation’s first Second Gentleman – Harris walked down the steps to the West Front of the US Capitol shortly after 11am. She wore a purple outfit created by two black designers, in a nod to Shirley Chisholm, the first black woman elected to the US Congress.

The daughter of an Indian mother and Jamaican father is now officially the highest ranking female in US office. “Don’t tell me things can’t change,” Biden said as he paid tribute to Harris in his inaugural speech. 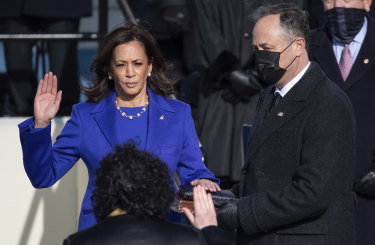 Kamala Harris is sworn in as the 49th US Vice-President.Credit:

Lady Gaga performing the national anthem: That voice. That outfit. That brooch. Lady Gaga’s powerful rendition of The Star Spangled Banner was one for the ages. The singer-songwriter has known Biden for a while – during the Obama administration the pair worked together on projects aimed at preventing sexual violence, and she made a few cameos during Biden’s campaign last year – so it was only fitting that the superstar headlined today’s entertainment.

Equally fitting was the brooch she wore – a dove carrying an olive branch – given the events of recent weeks.

“My intention is to acknowledge our past, be healing for our present, and passionate for a future where we work together lovingly,” she tweeted ahead of her performance.

Gaga was followed up by popstar J-Lo, who recited parts of the Pledge of Allegiance in Spanish, in between renditions of This Land is Your Land and America the Beautiful. 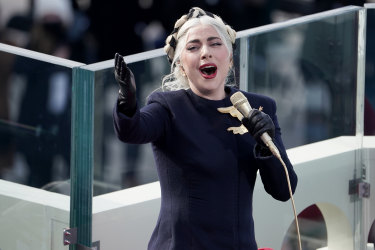 Garth Brooks ignoring COVID: Also on the bill today was country crooner Garth Brooks, who had earlier caused a stir among some conservatives for agreeing to appear at the event. "Boycott Garth Brooks!" tweeted Act for America founder Brigitte Gabriel.

Brooks, however, seemed unperturbed as he performed a stirring acapella rendition of Amazing Grace, donning a black cowboy hat, black shirt and black jacket. In fact, the superstar seemed so pumped by the moment that after his performance, he ran criss-crossed through the audience – maskless – to hug former presidents and first ladies in attendance.

Among them was Republican president George W Bush and his Democratic predecessor Bill Clinton (both were wearing their masks, which is just as well given COVID continues to ravage the US). 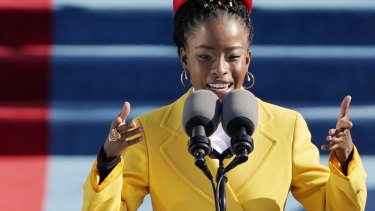 A young poet makes a splash: Performing poetry after a newly minted president gives his inaugural address might be a daunting task for some, but 23-year-old Amanda Gorman nailed it.

The Youth Poet Laureate recited an original piece written in the aftermath of this month’s Capitol siege, titled The Hill We Climb. Hailing from Kamala Harris’ home state of California, Gorman’s work often focuses on race, marginalisation and feminism.

This piece paid tribute to the fragility of democracy. "We've seen a force that would shatter our nation rather than share it,” she read. “Would destroy our country if it meant delaying democracy. And this effort very nearly succeeded. But while democracy can be periodically delayed, it can never be permanently defeated.”

Gorman is now believed to be the youngest poet to read at a presidential inauguration.

Snowflakes and sunshine: Minnesota Senator Amy Klobuchar delivered the introductory address at the inauguration. Shortly after her speech, it began to snow – a fleeting reminder of the grey day in February last year when she announced her Democratic bid for president in the middle of a blizzard.

Roy Blunt, the chairman of the Joint Congressional Committee on Inaugural Ceremonies, looked a tad concerned, admitting that he’d not accounted for a dramatic shift in the weather. He need not have worried. As Joe Biden took to the stage, the snowflakes disappeared, as if on cue, and gave way to sunshine. Even the weather seemed to be marking the end of a turbulent four years under Donald Trump. 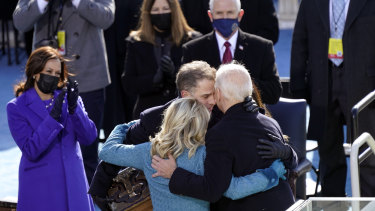 US President Joe Biden hugs first lady Jill Biden, his son Hunter Biden and daughter Ashley Biden after being sworn-in during the 59th Presidential Inauguration at the US Capitol in Washington.Credit:AP

Biden family hug: True to form, Joe Biden's Inauguration was very much a family affair. The Irish-Catholic was sworn in on a massive Bible that had been part of his clan since 1893, and had also been used by Biden's late son Beau, a former Delaware attorney-general who died of brain cancer five years ago.

The new US president was also surrounded by his children Hunter and Ashley, his many grandkids, and his wife Jill – or "Jilly" as he often calls her – a career teacher who is now America's first lady. But the most poignant moment came when Biden, Ashley, Jill and Hunter (who has been the subject of countless attacks by Republicans) embraced in a lengthy group hug after Biden was formally sworn in.

You could almost feel the warmth of the embrace cutting through the cold DC air.