Nothing sums up the price of this crazy war better than the sick children I saw being evacuated from hospital: RICHARD PENDLEBURY’s watches young patients at Kyiv’s main pediatric unit abandoning their beds to begin five-day journey to safety

It was a day of shame, if such an emotion is ever felt in Vladimir Putin’s Kremlin. Every sick child at Kyiv’s main paediatric hospital – Ukraine’s biggest – who is judged able to survive the journey is being evacuated to the West.

And yesterday afternoon, the reception hall of the war-battered Ohmatdyt Hospital offered up a pathetic, damning spectacle: the price of this crazy war.

The remaining patients from the oncology department – six children aged from one to 17 suffering from cancer – were gathered to begin a gruelling journey of up to five days. 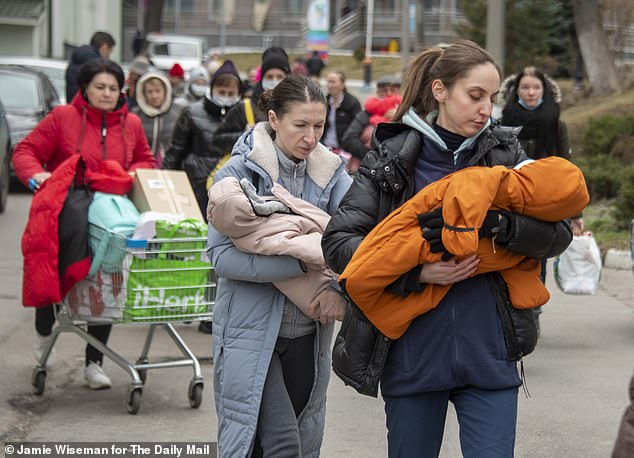 It was a day of shame, if such an emotion is ever felt in Vladimir Putin’s Kremlin. Every sick child at Kyiv’s main paediatric hospital – Ukraine’s biggest – who is judged able to survive the journey is being evacuated to the West

They must go if they are to survive the fallout from the Russian assault on their country. Misery is heaped upon already profound misery, for them and their parents, some of whom will also make the trek.

Antonina, nine, was being helped out of her wheelchair by her mother. Diagnosed with cancer in 2017, she is so terribly thin and frail that her progress to the bathroom was that of a great-grandmother rather than a child.

‘Of course, I’ll be relieved when I know for sure that my child will be cared for somewhere safe,’ her mother Alina tells me. ‘But until then I will worry.’

‘I have no idea how long the journey will take them, but when we sent the first three children West at the start of the week it took five days to reach Germany, where they are now,’ says Sister Olena Baidalenko, a senior oncology nurse.

‘But it’s been very scary here; for the children, for us and their parents.

‘A few days ago there was a gunfight next to the hospital [a suspected Russian infiltration team] and a bullet hit one of our windows.

‘Then, when our air defences hit a Russian cruise missile on another night, the blast destroyed all the glass in our reception doors. 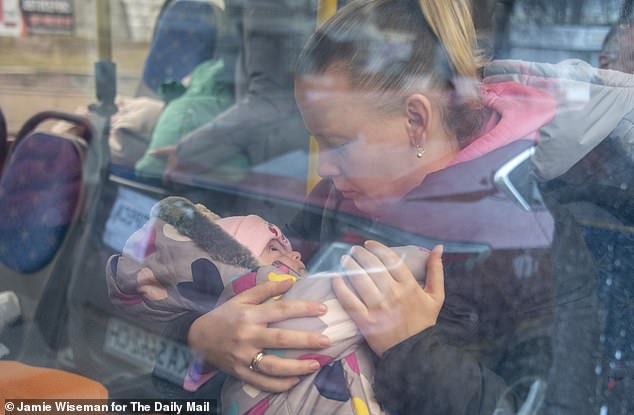 Mothers, babies and other patients are loaded aboard a bus from the Central Children’s Hospital in Kyiv for evacuation to Lviv

‘We had to drop everything and run to the shelters, even though we were preparing a chemo- therapy treatment for one of our children. We had to delay it. You can’t stop in the middle of the procedure.’

That child, four-year-old Milena, was one of yesterday’s evacuees. ‘Life is difficult enough for these children and their families,’ added Sister Baidalenko.

‘Fate has not been kind. Then on top of that you have this war.

‘Keep in mind that while they are being evacuated their treatment is not yet over. They need further urgent help elsewhere.

‘After they get to Lviv [by train] we will then decide their final destinations.’

The man placed in charge of the hospital evacuation is surgeon Roman Zhezhera.

When I find him he is a study of sleep deprivation and grace under pressure. Still in his scrubs, he leans against a reception desk, examining a list of children’s names attached to a clipboard. Deep shadows under his eyes.

One senses that if the desk weren’t there he would simply fold over on to the floor and begin snoring.

‘All the kids that can be sustained on such a journey will be taken to Lviv today,’ he explained, with infinite weariness.

‘We are hoping to move around 300 of them, including parents and other young relations. 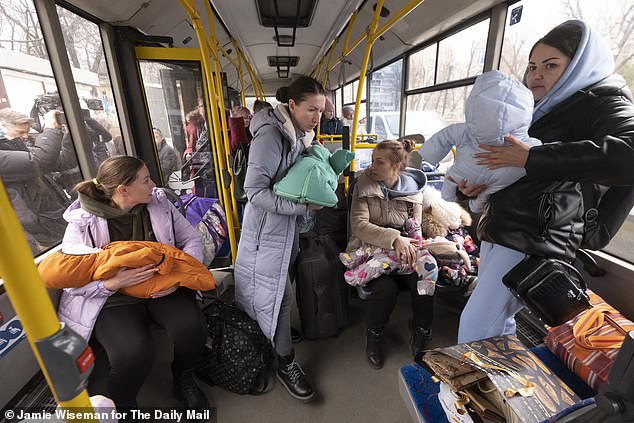 The man placed in charge of the hospital evacuation is surgeon Roman Zhezhera. When I find him he is a study of sleep deprivation and grace under pressure. Still in his scrubs, he leans against a reception desk, examining a list of children’s names attached to a clipboard. Deep shadows under his eyes

‘The kids will be going from all our departments, including oncology, neurosurgery, general therapy and those suffering from rare diseases.

‘The main problem is that the poor kids from oncology do not have immunity from infection, and that is a problem when we are under air attack like this.

‘They have to be taken backwards and forwards between their wards and the shelters in the hospital basement. And when that happens they come across kids with infectious diseases.

‘But the main problem is not that we do not have the expertise to treat them here, but the disruption in supply of the necessary medicines because of the war. It is a logistics issue.

‘Also while Kyiv is fairly stable compared with Kharkiv or Mariupol, we know the situation here can change in a minute.

‘So we are taking this pre- emptive action to take these children out of the potential line of fire.’ 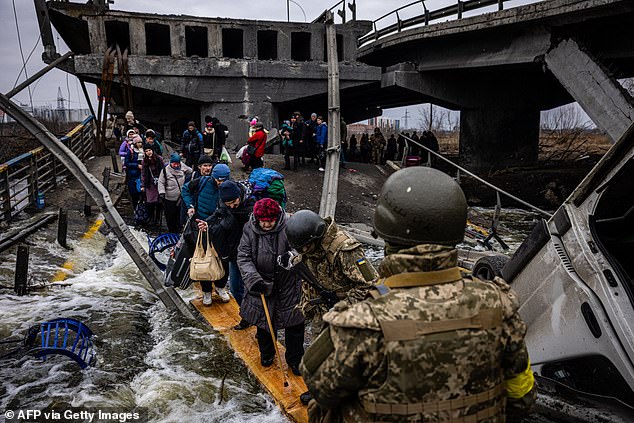 Hundreds of civilians have today been fleeing the city of Irpin, to the west of Kyiv, after it came under heavy attack by Russian forces in recent days while Putin’s men try to encircle the capital 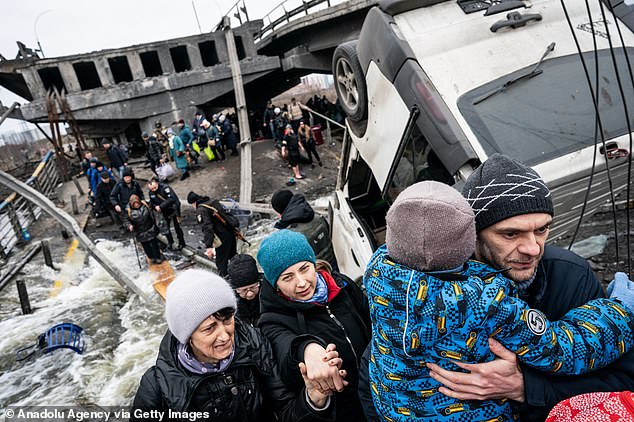 Elderly people and families with children are helped across a fast-flowing river underneath a destroyed road bridge outside Irpin, a city to the west of Kyiv, which Russian forces have been attacking 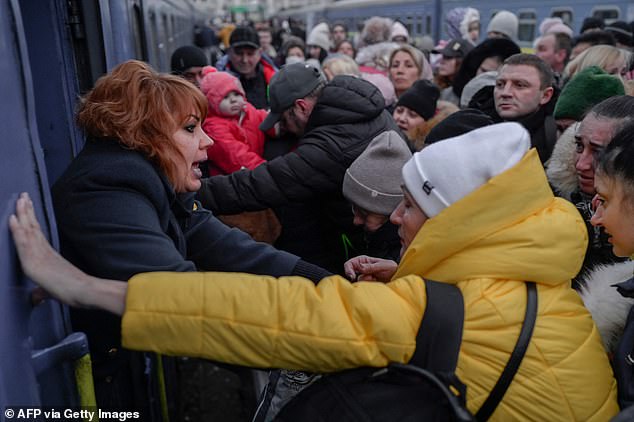 Mr Zhezhera said a number of medical staff from the hospital’s oncology department had gone ahead to Lviv to prepare for the children’s arrival.

By nightfall there might be only 50 children left in his hospital, he added, and it was already receiving war casualties.

Of the children who remain, some are too sick to travel and some stay because their parents are unwilling to go.

‘They don’t believe they will receive the same standard of treatment they get here. I can understand that,’ Mr Zhezhera said.

The line of yellow municipal buses being used to move the children, staff and parents stretched up Chornovola Street and almost out of sight.

There were tears, hugs, desperate scenes of parting and mild panic as the buses begin to fill. 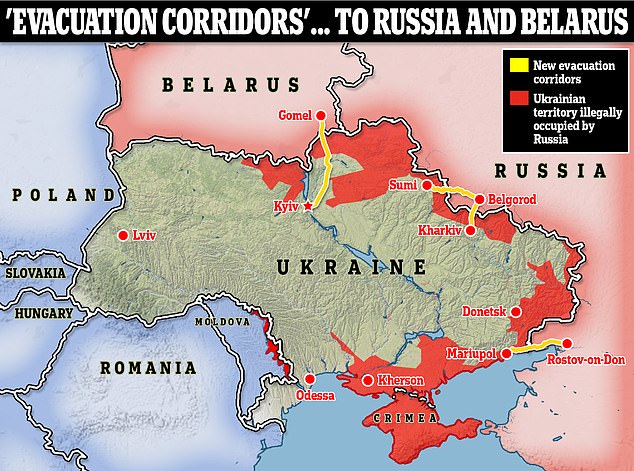 Kyiv today rejected Russia’s offer of ‘humanitarian corridors’ to evacuate civilians after it emerged several of them led to Russian territory or its close ally Belarus (top). Red Cross workers in Mariupol also said one of the routes Russia identified for civilians to leave the city had been covered with land mines 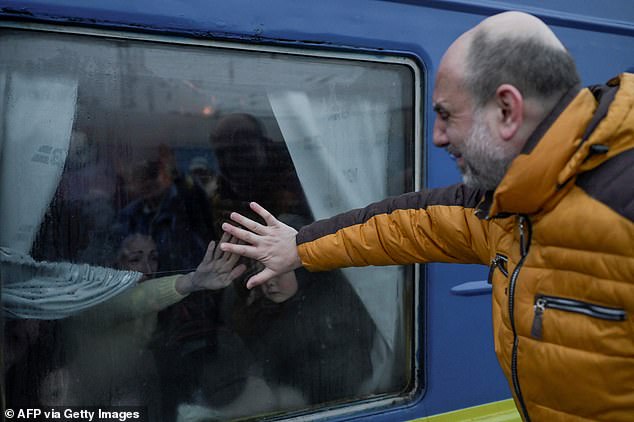 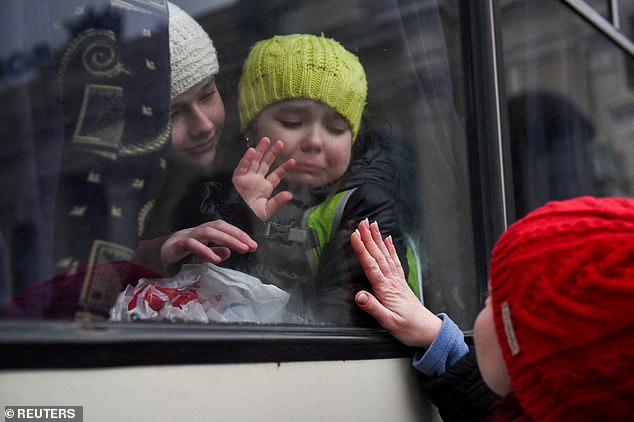 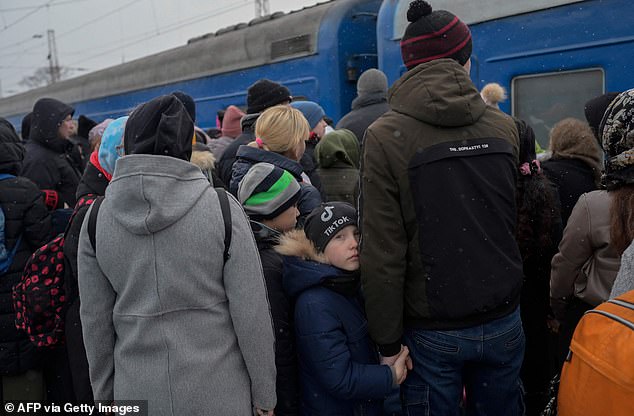 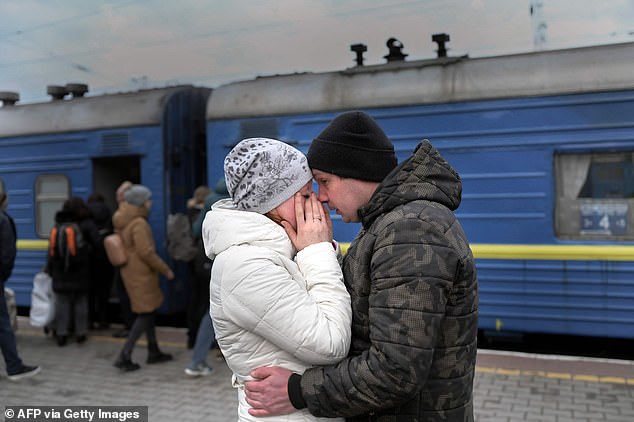 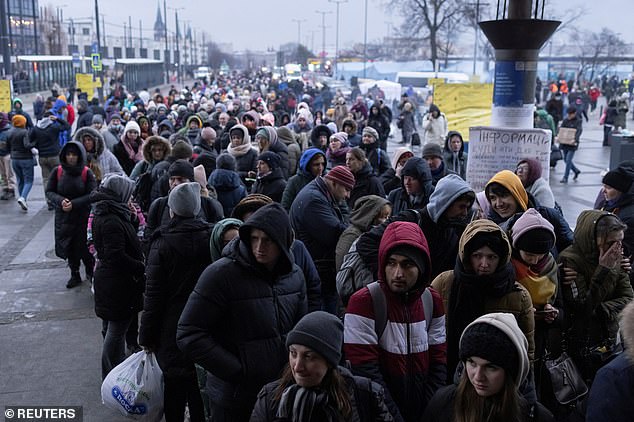 Hundreds of people queue for trains to Poland following the Russian invasion of Ukraine, in Lviv, Ukraine

Some families and friends, parents and children became separated in the chaos. ‘Don’t go without my little one!’ warned one woman. ‘Good luck!’ shouted another. ‘Take care!’ ‘Where is Misha?’ a third wailed.

The driver of the first bus – which seemed to have been allocated to mothers with babes in arms – added his own voice to the cacophony. ‘No more, we’re full!’ he pleaded.

‘Anyone not going to Lviv should get off now.’

But while baby Diana was safely on board, her twin sister Sofia was not. 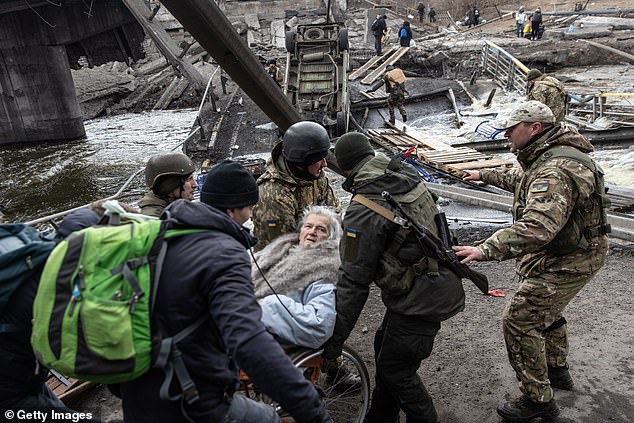 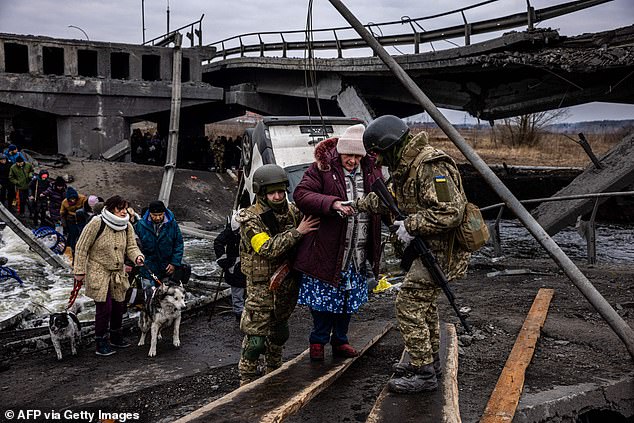 Ukrainian soldiers help an elderly woman to cross a destroyed bridge as she evacuates the city of Irpin, 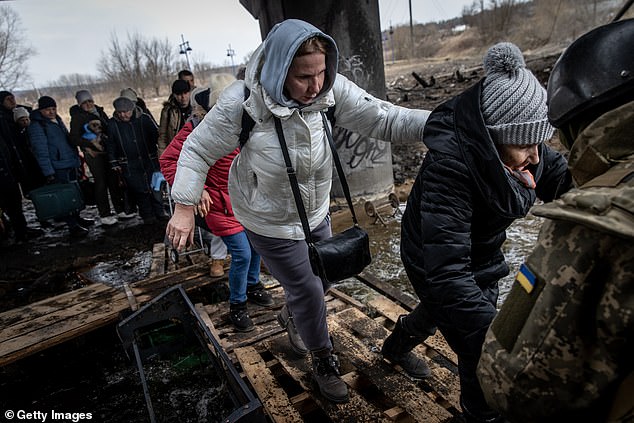 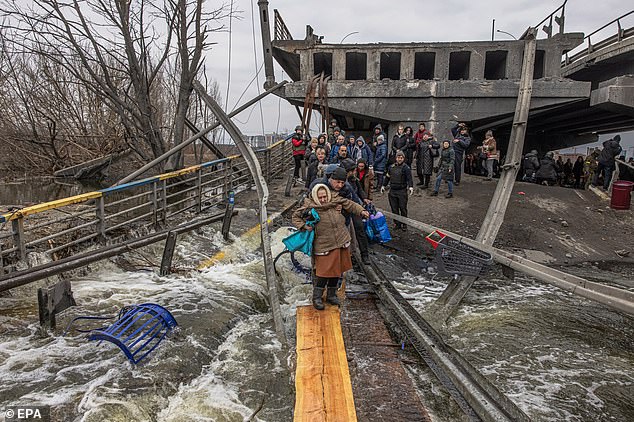 Residents cross the destroyed bridge as they flee from the frontline town of Irpin, Kyiv region in Ukraine following Russia’s invasion 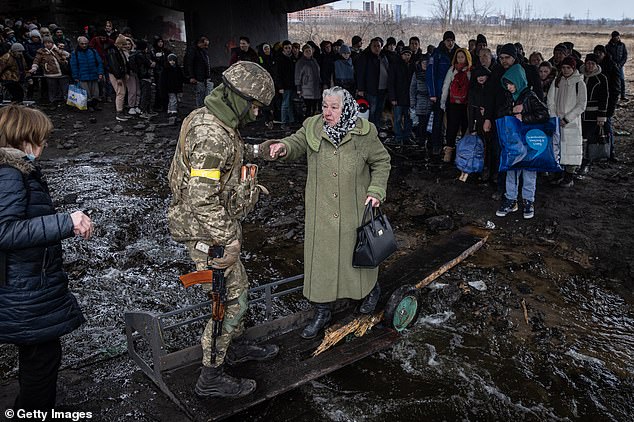 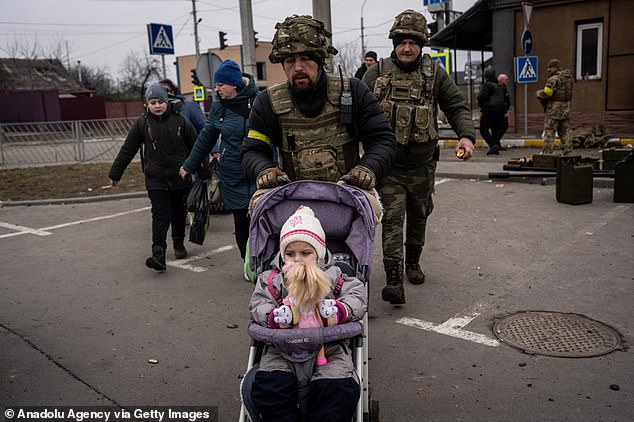 Civilians continue to flee from Irpin due to ongoing Russian attacks in Irpin, 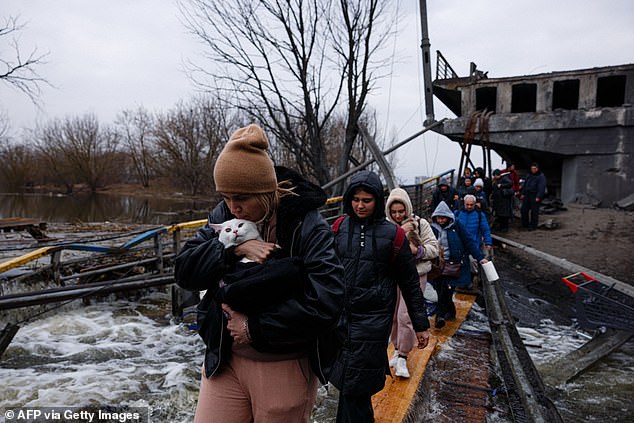 A woman carries her pet cat as evacuees cross a destroyed bridge as they flee the city of Irpin, northwest of Kyiv 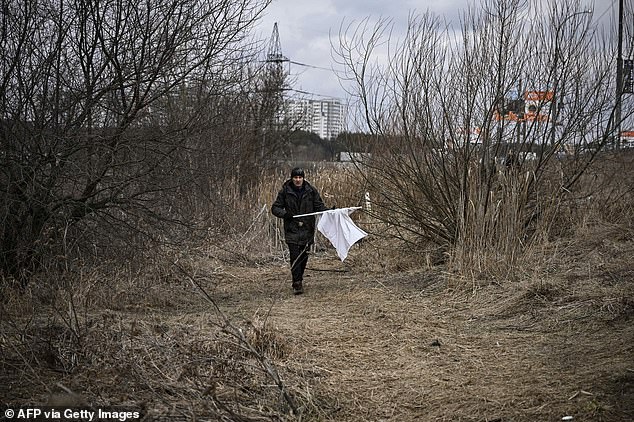 A man walks  with a white flag as hundreds of people flee the city of Irpin, west of Kyiv, on March 7

The bus moved only a few feet forwards before the twins’ father banged on the driver’s window.

And then came Sofia, carried through the hospital gates – and looking a little puzzled at the fuss – in the arms of a nurse.

She was handed on to the bus and it departed at last.

Many days of travel lay ahead for sick children who should be on their wards, receiving treatment for a variety of life-threatening conditions.

Instead, they – the least able to cope – have been forced to join the refugee exodus. How many will ever return?

Shame on you, Mr Putin.

Calling upon that human spirit, we are now launching an appeal to raise money for refugees from Ukraine.

All donations to the Mail Ukraine Appeal will be distributed to charities and aid organisations providing such essential services.