Police release footage of fatal head-on crash caused by ‘despicable’ drug-driver, 25, as he is jailed for eight years for killing ‘doting and playful grandfather’ 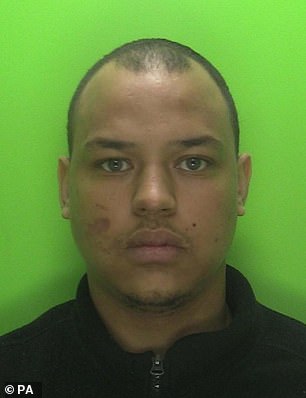 Aiden King-Eeson (pictured), from Birmingham, was jailed for eight years at Nottingham Crown Court for causing the death of Gurdip Singh Matharu

Police have released footage of a fatal crash caused by a ‘despicable’ drug-driver who also used his car as a weapon to ram a lorry.

Aiden King-Eeson, from Birmingham, was jailed for eight years at Nottingham Crown Court for causing the death of Gurdip Singh Matharu.

Nottinghamshire Police said footage of the incident had been released to warn motorists of the devastation drug-driving can cause.

King-Eeson, from Handsworth, Birmingham, collided head-on with taxi driver Mr Matharu, who had been on his way home to celebrate his son’s birthday.

Officers said King-Eeson drove at more than double the speed limit, ignored red lights and drove on the wrong side of the road before the crash at about 9am in Gregory Boulevard, Nottingham, on July 4.

The 25-year-old had travelled to Hucknall for a house party on July 3 before taking a BMW car without permission and driving into Nottingham.

The vehicle was then captured on a speed camera travelling on Nuthall Road in Aspley at 61mph in a 30mph zone, before a collision with a lorry.

King-Eeson, who had cocaine in his system, then ran red lights and was driving on the wrong side of the road at around 74mph in a 30mph zone when the fatal crash occurred. 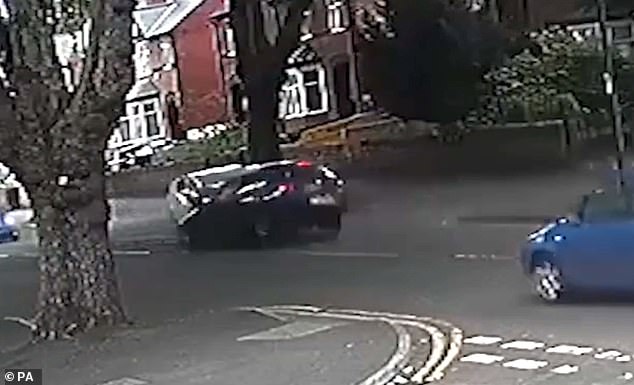 He pleaded guilty to causing death by dangerous driving, aggravated vehicle taking and driving without insurance and a licence, and was banned from driving for three years once he is released from custody.

King-Eeson, originally from Zimbabwe, also faces possible deportation at the end of his sentence.

Mr Matharu’s daughter Sandeep Marathu issued a statement through police, saying: ‘Our lives were changed forever as my dad was killed in this collision. 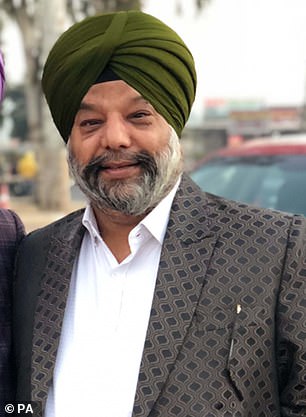 Mr Matharu’s (pictured) daughter Sandeep Marathu issued a statement through police, saying: ‘Our lives were changed forever as my dad was killed in this collision’

‘He was a loving husband, a father to me and my brothers and a doting, playful grandad and adored by his family.

‘Since arriving in the UK in 1996, dad worked hard to provide his family with a better life, making many personal sacrifices to ensure his family did not miss out.

‘At the time of the crash my dad was on his way home from work but he never made it. He fell victim to King-Eeson, whose selfish and reckless actions gave dad no chance of survival.

‘Dad died on the side of the street, with no family with him, which is something that will haunt us all forever. We lost the pillar of our family that day.’

Detective Sergeant Adam Cooper said: ‘King-Eeson’s actions go beyond words. He used a car as a weapon that day, carelessly driving into anything that came in his way, recklessly ignoring speed limits and having no regard for others’ safety.

‘It is my belief that he had been up all night having taken cocaine most of which had left his system by the time he was tested.

‘He was relentless in his driving rampage, only stopping when he had taken the life of an innocent man who just so happened to be another object in his way.

‘Mr Marathu’s family remain distraught and although the sentencing today is of little comfort to their loss, we recognise that King-Eeson has now been held to account for this despicable act.’