SHOCKING dash cam footage shows the moment a Scots woman caused a head-on crash while trying to overtake a lorry.

The footage was captured on the HGV’s sideview camera during the smash incident on Standing Stane Road, East Wemyss, Fife.

The video shows the blue Audi motor trying to pass on the right of the lorry on the 60mph road.

But the driver misjudged the move – resulting in the direct collision with an oncoming white van.

Driver Catherine Dryburgh, 67, appeared at Kirkcaldy Sheriff Court on Monday over the smash in October 2020.

The Covid test site worker was fined £640 and handed six penalty points on her licence after it was deemed she carelessly tried to overtake the lorry, the Evening Telegraph reports.

Footage of the smash was shown to the court.

It shows Dryburgh attempting to follow a red Audi in overtaking the HGV on the single carriageway. 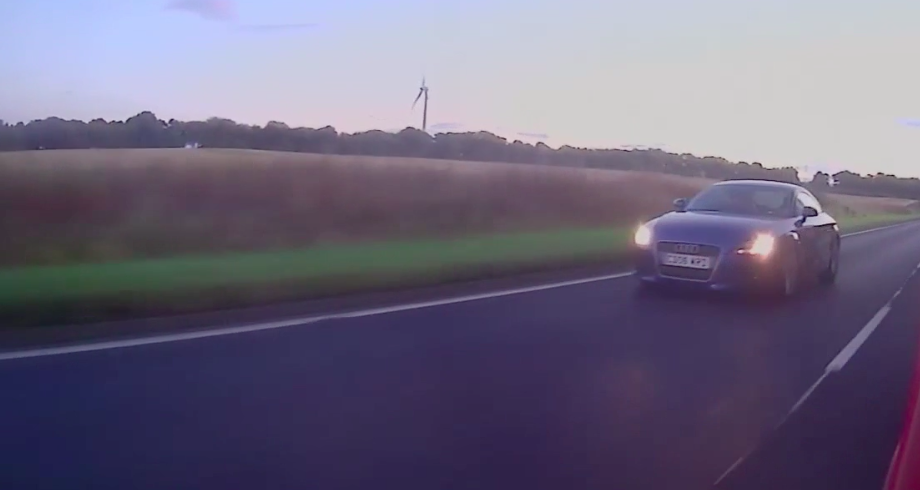 The video also shows Dryburgh indicating in an attempt to get back into the correct lane before the two motors collided.

Driver of the van William Ritchie was taken to nearby Victoria Hospital for treatment to “minor” injuries before being released later that day.

The court heard that Dryburgh had come out of retirement to initially work in track and trace and a coronavirus testing centre in Glenrothes during the pandemic.

The court heard Dryburgh had no previous convictions and had been given no penalty points in the 24 years she had been driving.

She admitted to overtaking when it was unsafe to do so and crashing into Mr Ritchie’s van.

Sheriff Kenneth Anderson fined Dryburgh £600 plus a £40 victim surcharge and issued her with six penalty points.