An East Gippsland woman whose car plunged 50 metres off a cliff and landed on its roof says she would be dead if not for the bravery of her teenage daughter, Trinity.

Shannon Bennett said Trinity, then aged 13, put aside her terror at witnessing the 2017 accident on the Buchan-Orbost Road and climbed down to the wreck while on the phone to triple zero. 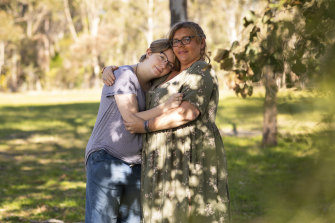 She said Trinity, now 17 and studying for her VCE, was a deserving recipient of a national bravery award, announced on Wednesday. Trinity receives the commendation for brave conduct.

“If she hadn’t been there and kept her cool, everything could have been so different,” Mrs Bennett said. “Because of the way she dealt with it, I’m here.”

The accident happened on October 20, 2017, and started with Mrs Bennett doing a U-turn on the remote country road. The car began slipping in mud and Mrs Bennett asked Trinity to get out.

As the car started sinking on the soft edge, Trinity called triple zero and reported the ground under the vehicle was “giving way”. 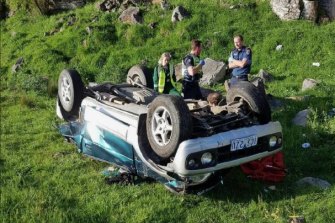 Shannon Bennett survived after the crash in which her car landed 100 metres below the road.

In less than five minutes, Trinity’s screams could be heard on the call as she reported: “The car’s gone over the edge.”

The SUV rolled several times down a 50-metre slope, then free-fell another 50 metres down a sheer drop, landing on its roof in a paddock. Smoke was coming out of the vehicle.

Listening to the triple zero recording six months later, Mrs Bennett cried with pride that Trinity “managed to pull herself back, out of the frenzy of it all” and instead think of how she could help.

While still talking to the operator, and despite a fear of heights, Trinity climbed down the rocky cliff to the car, where an unconscious Mrs Bennett’s legs stuck out from the driver’s side window.

Trinity described the scene to the operator until help arrived. She says now: “I couldn’t tell if Mum was alive. I was mentally forcing myself to stay calm. I kept telling myself that Mum would be fine. I was like, don’t panic, everything’s going to be all right.”

Mrs Bennett, 42, of Bumberrah near Bairnsdale, is permanently disabled after suffering a fractured skull, pelvis and vertebrae, a torn aorta, a split spleen and a shattered arm. She now suffers depression and anxiety.

She said Trinity, her only child, helped her with shopping and personal care.

“I have so much love for her,” Mrs Bennett said. “She is my absolute sunshine.”

Brandon Penrose, 32, has also been given a commendation for brave conduct, for confronting a man punching a female passenger in a car in Somerton Road, Roxburgh Park, in March 2019. 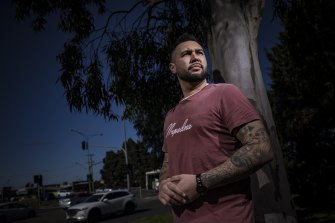 Brandon Penrose near the Roxburgh Park intersection where he stopped a man hitting a woman.Credit:Chris Hopkins

At traffic lights, Mr Penrose got out of his car and asked the man to stop, but the stranger attacked Mr Penrose, first with fists and then a club lock, before onlookers helped restrain the man.

Mr Penrose said he had no regrets. “It’s good to be recognised, but I hope out of this that more people will wake up to violence against women,” he said.

“One hundred per cent, I’d do it again. I cannot stand for it. I want everyone else to realise, don’t turn a blind eye and just drive away. If you see something, try and help out as much as you can.”

Others include Victorian soldier Sergeant Martin Stagg, who receives a bravery award for swimming 500 metres in two-metre waves from a beach near Newcastle, NSW, in 2016 to rescue a woman caught in a rip.

Angus Laing receives a commendation for brave conduct for breaking into a Port Melbourne apartment in 2016 to rescue an elderly woman from a fire.