Outgoing US President Donald Trump faces a blizzard of lawsuits and even the potential threat of jail when he leaves office next year, as he will lose the legal protections afforded to a sitting president.

From allegations of tax evasion to potential charges arising out of the Mueller investigation into alleged Russian interference in the 2016 election, Trump and his legal team can expect to spend considerable time in court. 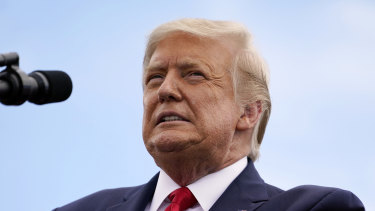 US President Donald Trump could face up to a dozen court cases once his term has ended. Credit:AP

Estimates of the number of cases vary, with some experts suggesting that there could be more than a dozen.

Potentially, the biggest threat comes from an investigation into his tax affairs being pursued by New York Attorney-General Letitia James and Manhattan District Attorney Cyrus Vance.

The President fought tooth and nail to prevent the documents from being released, without success, after the Supreme Court rejected his argument that he enjoyed immunity because of his office.

Should Trump be found guilty of tax evasion, he could face up to five years in jail.

The other major threat is posed by the Mueller investigation.

Mueller did not clear the President of obstruction of justice, but merely ruled that he was bound by Justice Department guidelines that a criminal indictment could not be made against a sitting president.

According to the report, there were 10 occasions when Trump might have obstructed justice. Once he is stripped of presidential immunity, there is a danger that prosecutors might want to revisit the issue.

In office, Trump has used his powers to protect allies, including commuting Roger Stone's jail sentence. He has also pardoned sheriff Joe Arpaio, who was convicted of contempt of court.

The President asserted in 2018 that he could pardon himself, but this has been disputed by legal scholars.

There are also a raft of civil cases that could cost Trump dearly both financially and in terms of his reputation.

Summer Zervos, a contestant on The Apprentice, is suing Trump for defamation after he denied her allegations that he sexually assaulted her in 2007.

E. Jean Carroll, an advice columnist, is also accusing him of defamation after Trump denied her allegations of rape.

Another embarrassing case has been brought by Mary Trump, the President's niece, who accuses him and other members of the Trump family of cheating her out of her inheritance.

Trump will also have to defend a case brought by Michael Cohen, his former lawyer, who is suing the Trump organisation for nearly $2 million in legal fees.

See you in court: potential Trump prosecutions and lawsuits

Tax fraud: New York's attorney general is investigating whether Donald Trump and his company committed tax fraud. The average prison sentence for tax evasion is three to five years. The maximum fine is $US250,000 ($343,000) for individuals and $US500,000 ($686,000) for corporations.

Misuse of funds: Washington DC alleges the Trump inaugural committee violated Nonprofit Act by knowingly overpaying for services at the Trump hotel in the capital.

Defamation: Summer Zervos, a contestant on The Apprentice alleges Trump defamed her by denying her allegations that he sexually assaulted her in 2007.

Inheritance dispute: Case brought by Trump's niece Mary Trump, who published a book criticising the President, alleges she was cheated out of her inheritance by the Trump family.

Damages: Orestes Fintiklis and his fund, Ithaca Capital Investments, which took control of the property from Trump International Hotels Management in 2018, is seeking $15 million in damages.

Understand the election result and its aftermath with expert analysis from US correspondent Matthew Knott. Sign up to The Sydney Morning Herald‘s newsletter here, The Age‘s here, Brisbane Times‘ here and WAtoday‘s here.