Scrap metal contaminated with uranium that sparked major counter-terror probe when it landed at Heathrow could not have been used to make ‘dirty’ nuclear bomb, police say

A radioactive cargo flown into Heathrow Airport, sparking a major counter terrorism probe, is not ‘linked to any direct threat’ to the UK, a top officer suggested yesterday.

A shipment of scrap metal contaminated with uranium set off an alert at Britain’s biggest airport, sparking fears nuclear material may have been smuggled into the country to make a ‘dirty bomb’.

The undeclared package originated in Pakistan before arriving at Heathrow’s Terminal Four aboard an Oman Air passenger jet from Muscat on December 29, sources said. 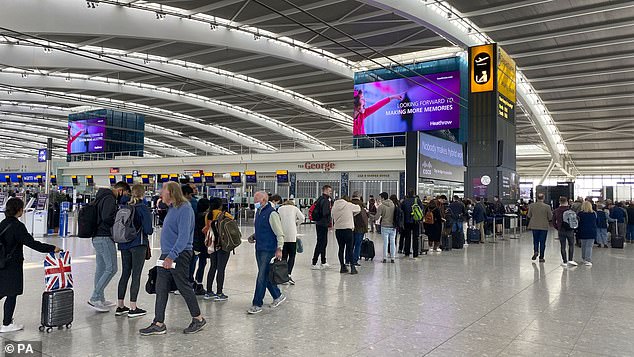 The undeclared package originated in Pakistan before arriving at Heathrow’s Terminal Four aboard an Oman Air passenger jet from Muscat on December 29, sources said. Passengers are pictured above at Heathrow yesterday

The package was then rushed to a freight shed which contains a dedicated isolation room for radioactive material.

Sources confirmed that the uranium found in a very small quantity was not ‘weapons-grade’ and could not be used to manufacture a thermonuclear weapon.

Commander Richard Smith, the head of the Metropolitan Police counter-terrorism command said: ‘Although our investigation remains ongoing, from our inquiries so far, it does not appear to be linked to any direct threat.’

It is understood the package was addressed to an Iranian-linked firm in the UK.

Yesterday it was suggested the firm may be one of a small number in the UK licenced to handle uranium.

Businesses need a licence to import nuclear materials into the UK, with security checks taking around two months. 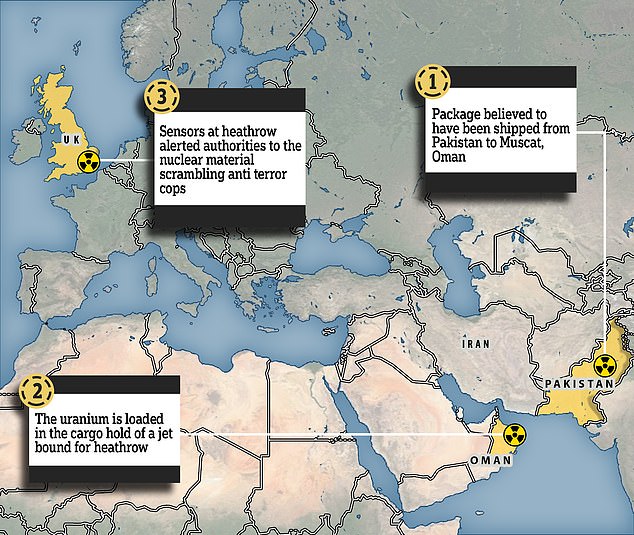 A shipment of scrap metal contaminated with uranium set off an alert at Britain’s biggest airport, sparking fears nuclear material may have been smuggled into the country to make a ‘dirty bomb’

But metal recycling experts said it is extremely rare to air freight scrap metal, which is usually shipped abroad.

Experts suggested the contaminated container may have been sent to the UK in error or the radioactive material missed due to poor checks and handling when it was loaded for take-off.

Radioactive materials can be incorporated into the scrap metal chain from redundant medical or industrial equipment such as pipes from chemical plants.

Metal contaminated by the nuclear fuel industry in other countries with less strict controls on recycling has also occasionally been found in the scrap supply chain here.

James Kelly, Chief Executive Officer of the British Metals Recycling Association said: ‘Radioactive contaminated scrap has been found in the UK before, it does happen occasionally.

‘Around 60-80 per cent of our scrap metal is exported and some of it is also imported into the UK.

‘But it is very, very rare for scrap metal to be sent by air freight. Some people in the industry for 30 years have never used air freight.

‘It would have to be for a specific high value metal or purpose.

‘It’s possible this is a mistake. Documentation is very strict and a component may have been sent back due to wrong paperwork or checks elsewhere have not revealed contamination which can occur naturally by dust.

‘I don’t know the company involved but I was told that they are registered to handle uranium.’ Forensic teams are understood to be still examining the material, but yesterday counter terrorism officers moved to reassure the public.

Commander Smith promised to ‘follow every avenue’ to discover how it came to be found at Heathrow Airport.

He told the London Assembly Police and Crime Committee the tiny amount of uranium posed no risk either to airport staff or members of the public: ‘The circumstances are that in the course of routine scanning at London Heathrow an element of cargo was identified that was emitting a radioactive signal.

‘There are procedures in place to deal with these sorts of incidents and those procedures were enacted.

‘As part of that the counter-terrorism commands were contacted and have opened an investigation into the surrounding circumstances.

He added: ‘The amount of material we’re talking about was very small, and there was no threat to public health or public safety identified.

‘We will of course, follow every avenue to see what the background to this was and satisfy ourselves that there’s no further threat.’

Colonel Hamish de Bretton-Gordon, the former head of the UK’s nuclear defence regiment, said ‘Uranium can give off very high levels of poisonous radiation. The good news is the system worked.’

Police inquiries are expected to continue for some days to ensure there was no terror link, but no evidence had been found so far to warrant any arrests or questioning under caution of those involved.

As long ago as 2003 the then head of MI5 warned that about the possibility of a dirty bomb or chemical weapons attack launched on a major Western city.

Eliza Manningham-Buller said intelligence reports suggested ‘renegade scientists’ had given terrorist groups the information they needed to create such weapons.

But sources said yesterday no evidence had been found to indicate the material was intended to be used as a weapon.

Last night, one source described the amount of contaminated material as mere ‘traces’.

Officers will now be seeking to determine all of those involved in the air freight and whether anyone else could have intercepted the cargo.