Some Scottish, Danish and Italian fans are accusing England of cheating their way into the Euro 2020 final and say Raheem Sterling took a dive to secure the crucial penalty that secured England’s win over Denmark.

And while a lot of the ribbing came from North of the border, international fans joined in too with one Italian commentator suggesting ‘Football’s diving home’.

Scottish newspapers had a radically different take on England’s 2-1 victory, with the back page of the Scottish edition of the Metro carrying the headline ‘They Think It’s All Over’ in reference to the Three Lions notorious 1966 World Cup final win.

The front page of the same newspaper said ‘England dive into final’ while the Scottish edition of The Sun tweeted ‘Controversial penalty sees England into first major final since 1966.’

At a fan zone in Glasgow, some Scottish fans cheered against the Three Lions – but there were also plenty of supporters cheering for England as Gareth Southgate’s squad clinched a victory over the Danes 2-1.

But the majority of non-English fans focused on the merits of the penalty awarded after Raheem Sterling went down in the box in extra time.

The majority of fans believe England were fortunate to say the least to win the penalty, with very little contact seen on Sterling in the replay.

Kane stood up to take the penalty, and remarkably missed. However, he was sharp enough to smash it home from the rebound to send England into the final. 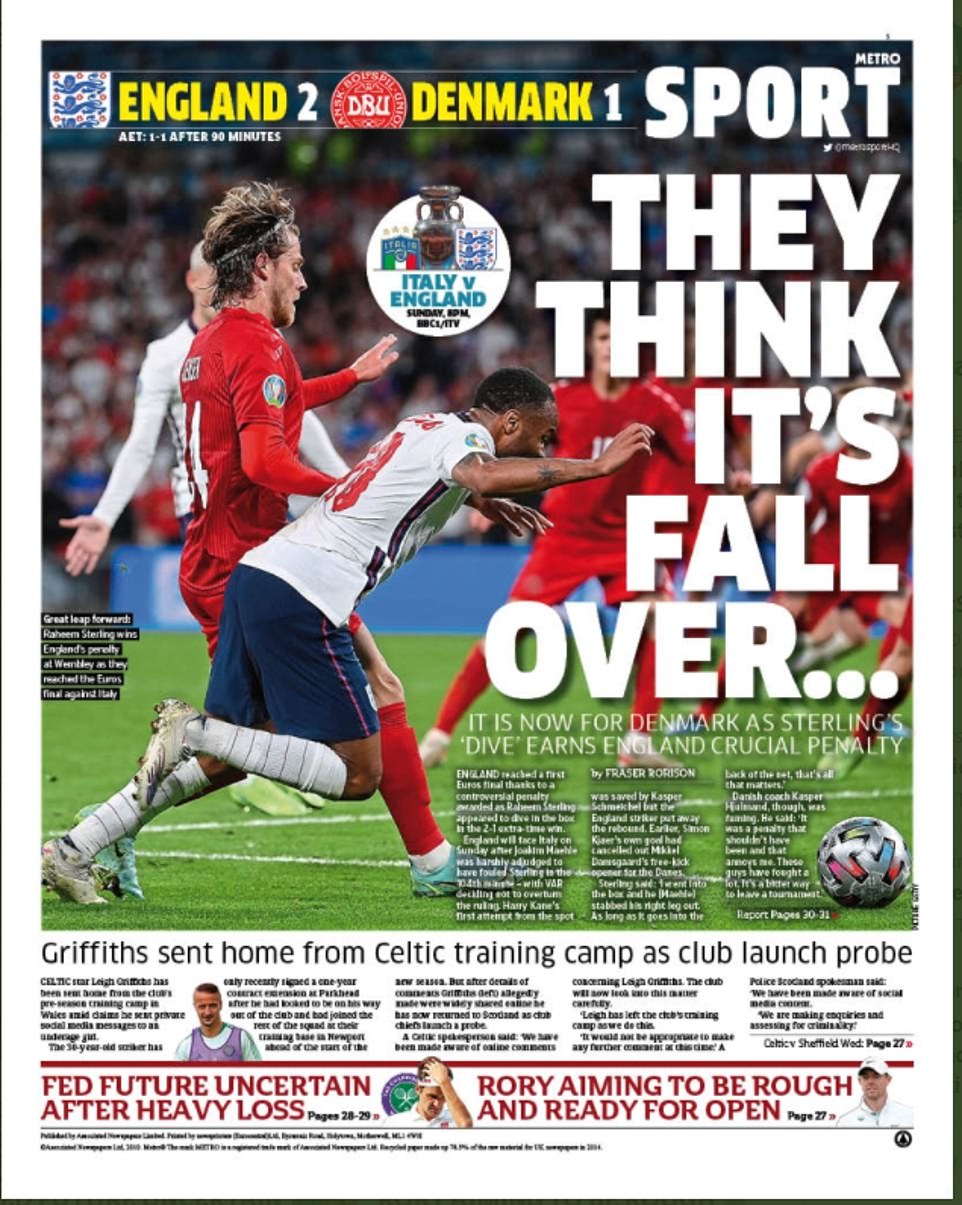 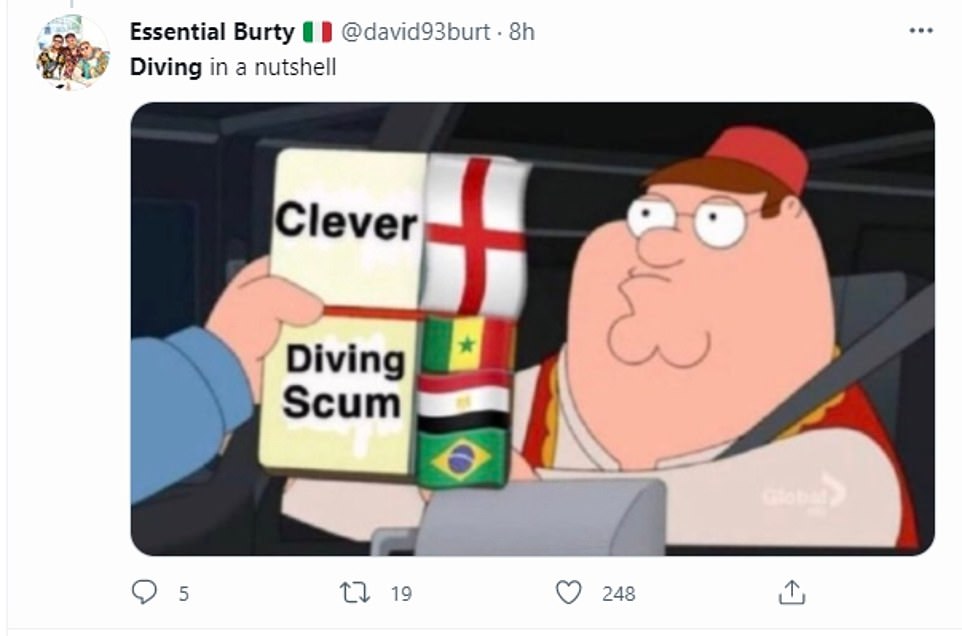 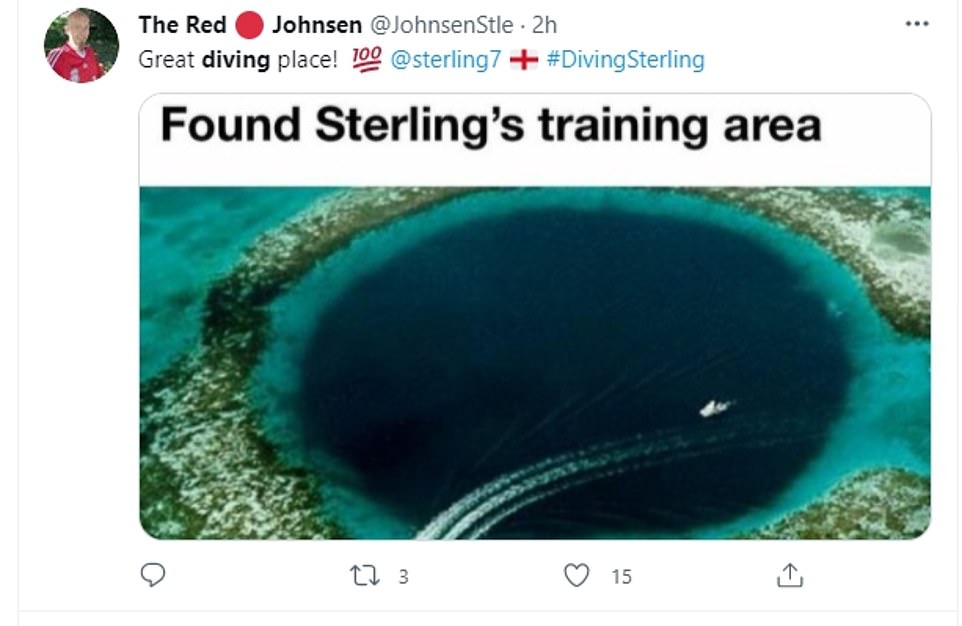 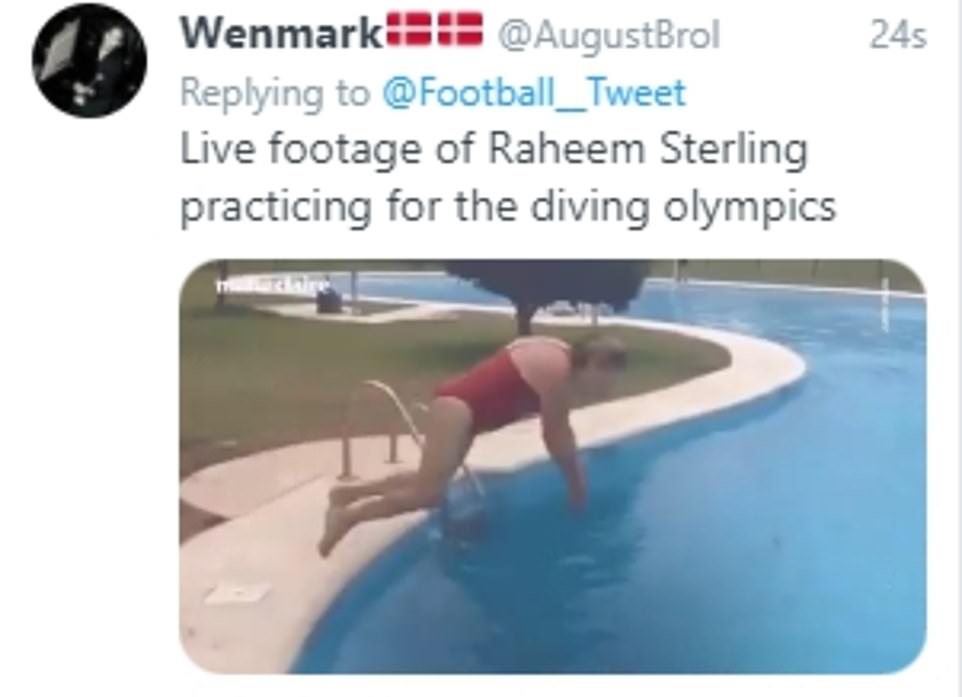 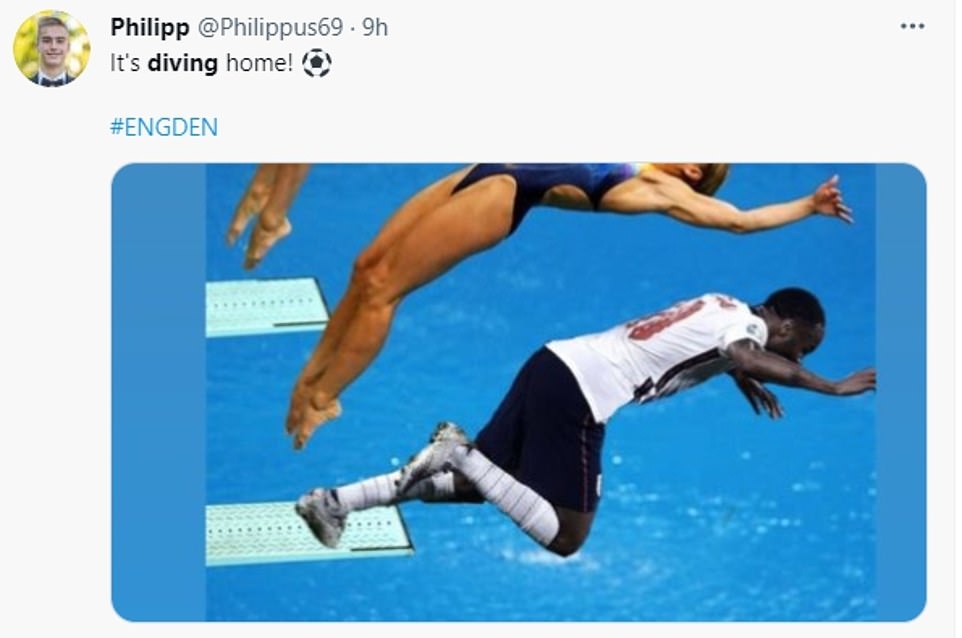 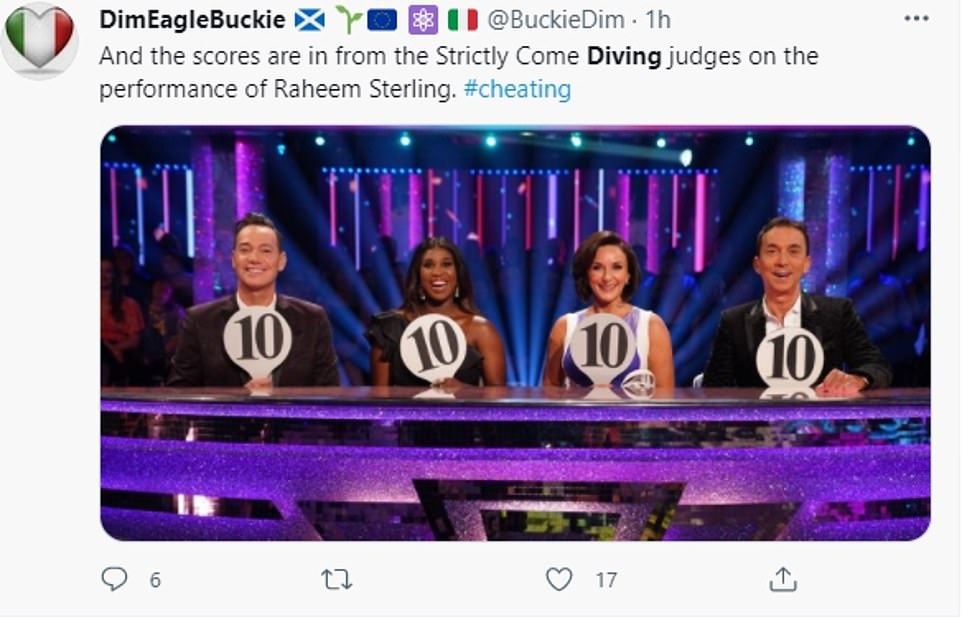 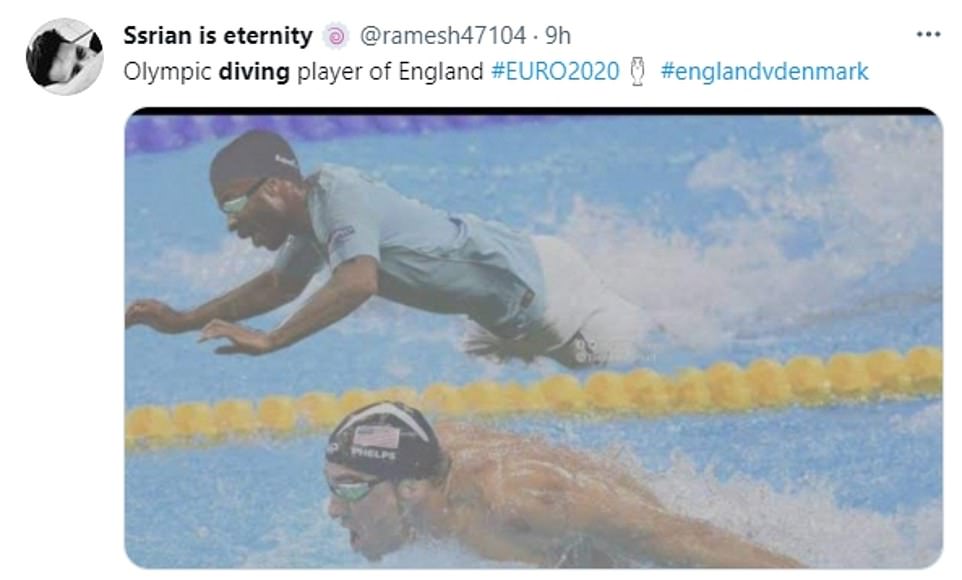 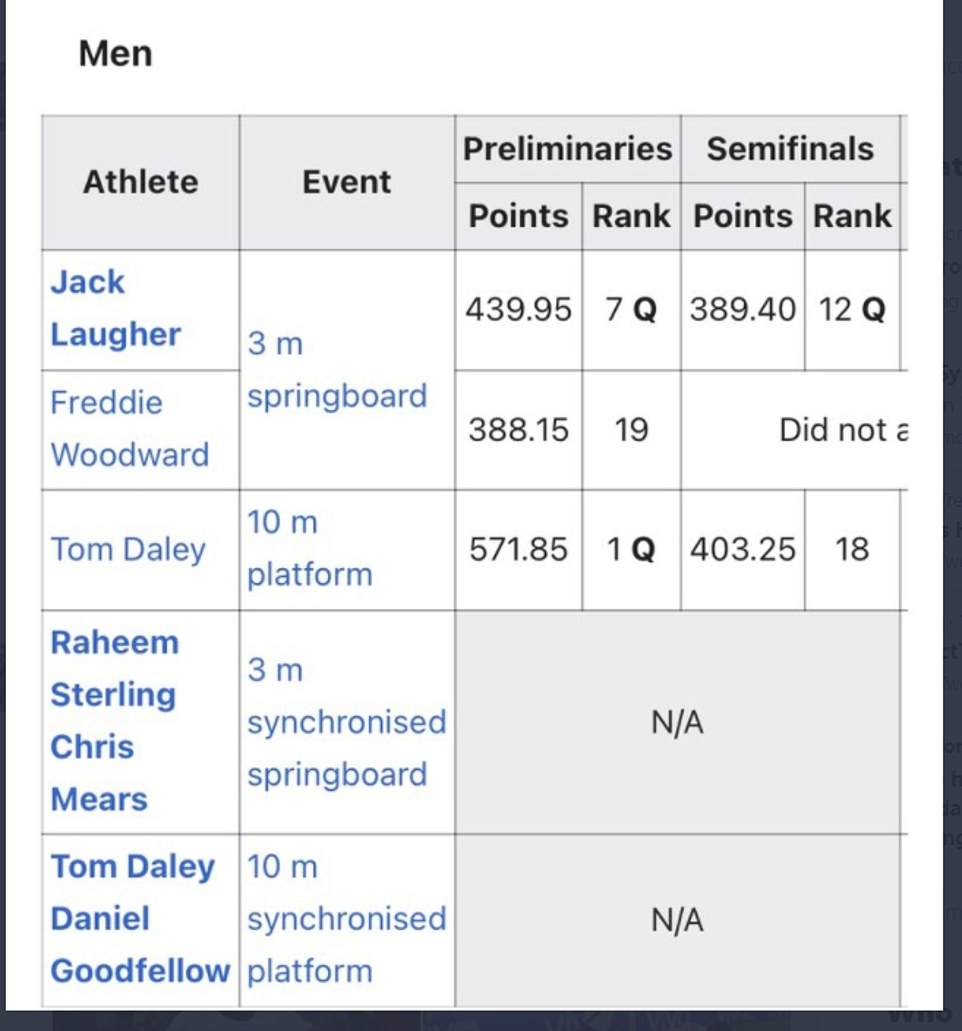 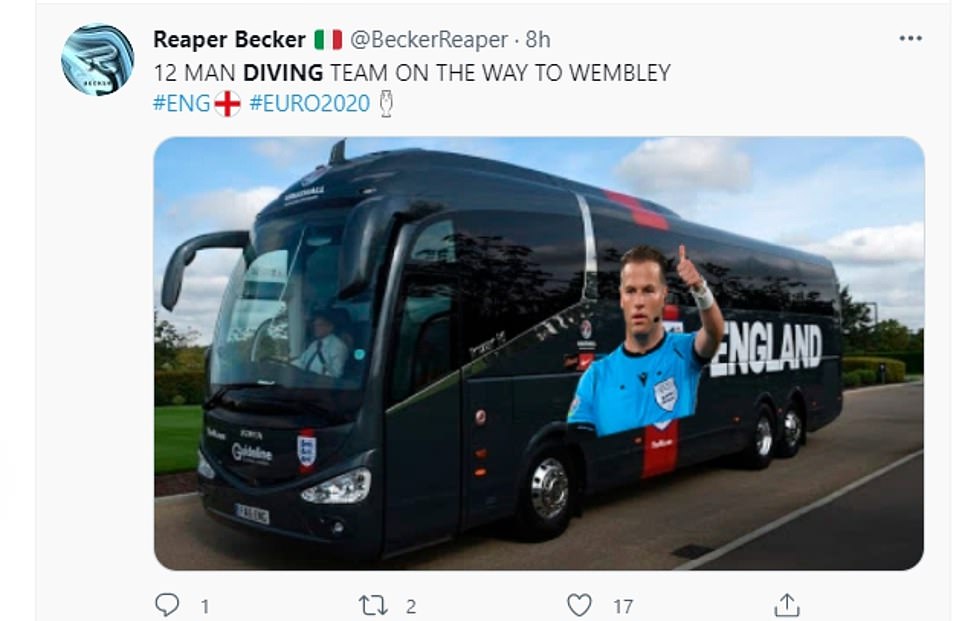 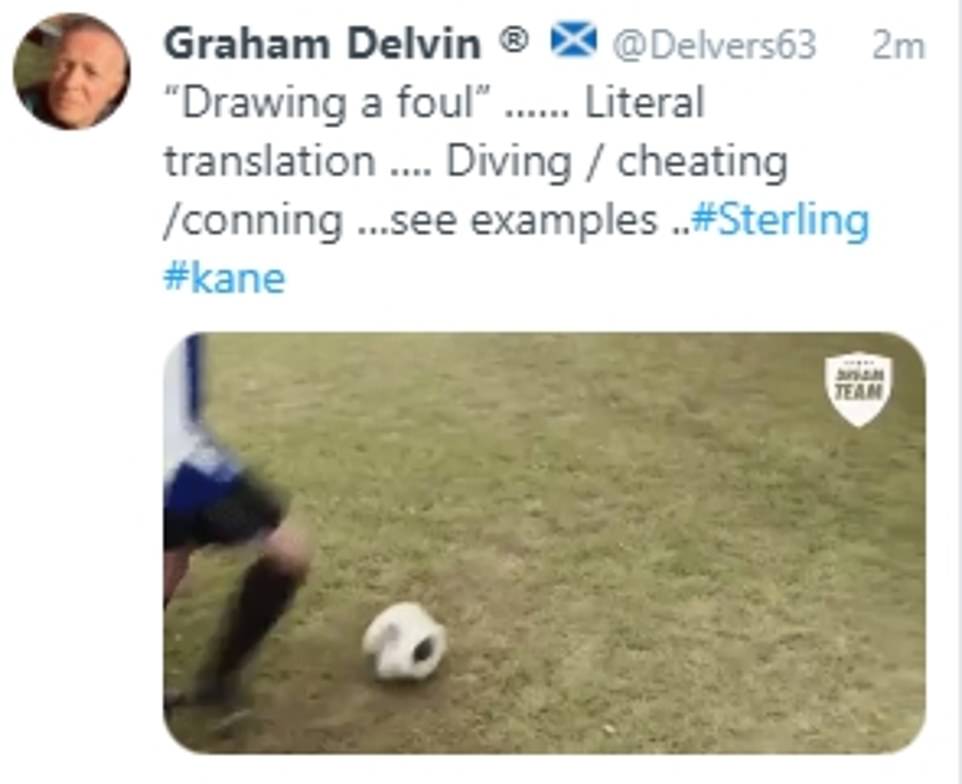 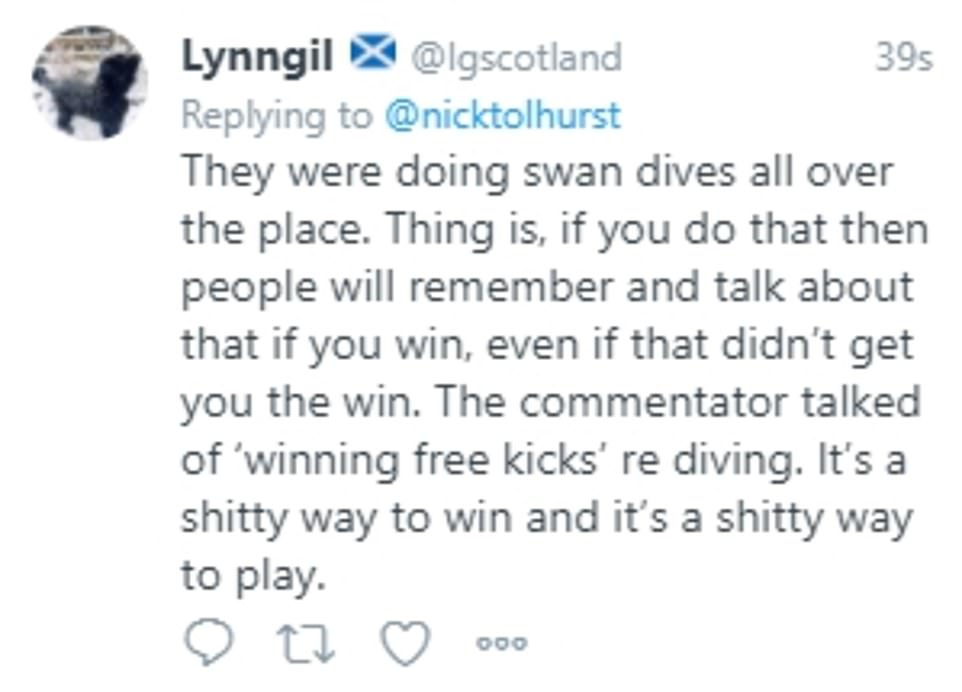 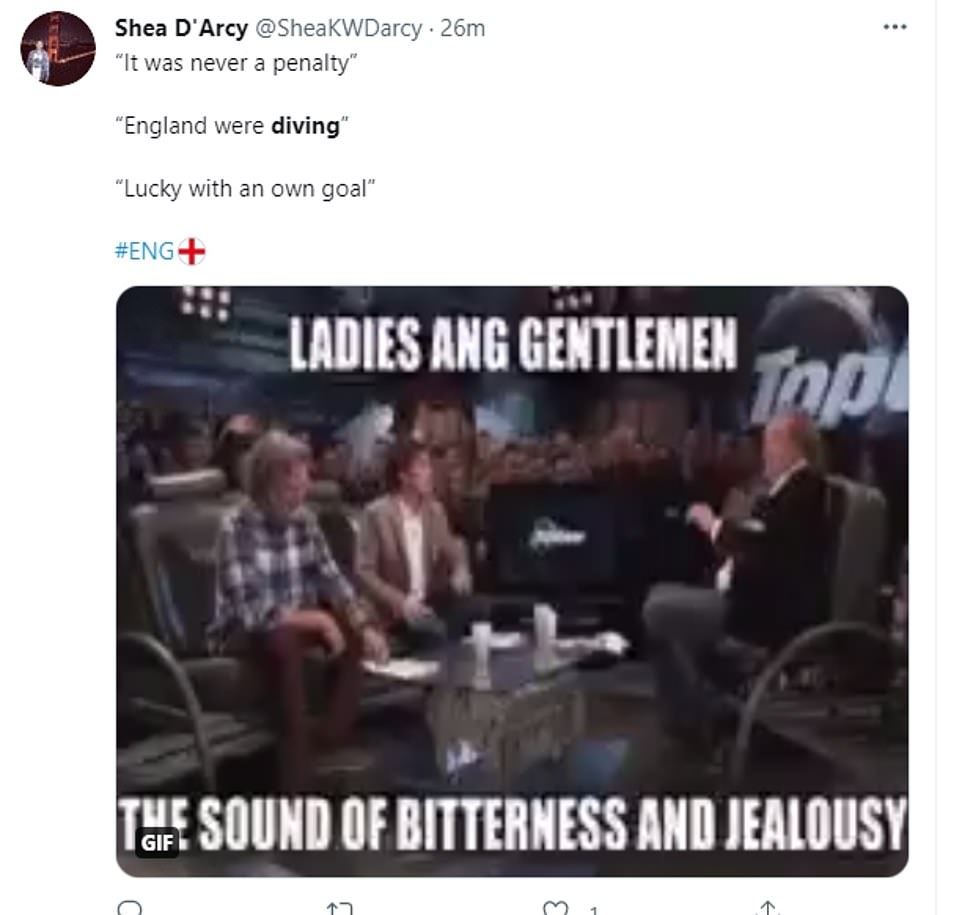 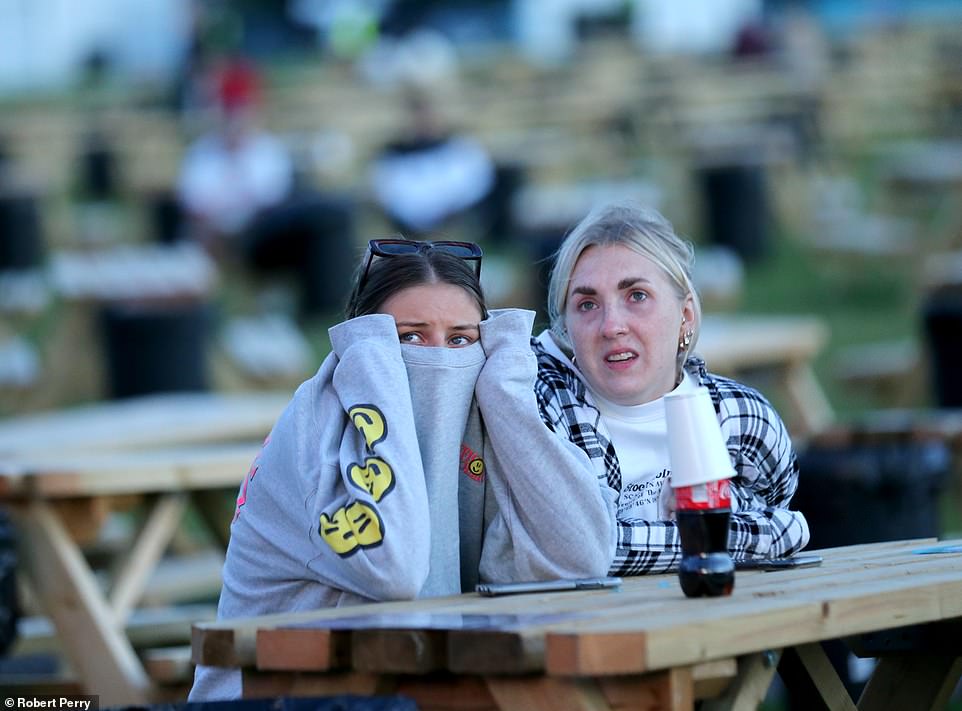 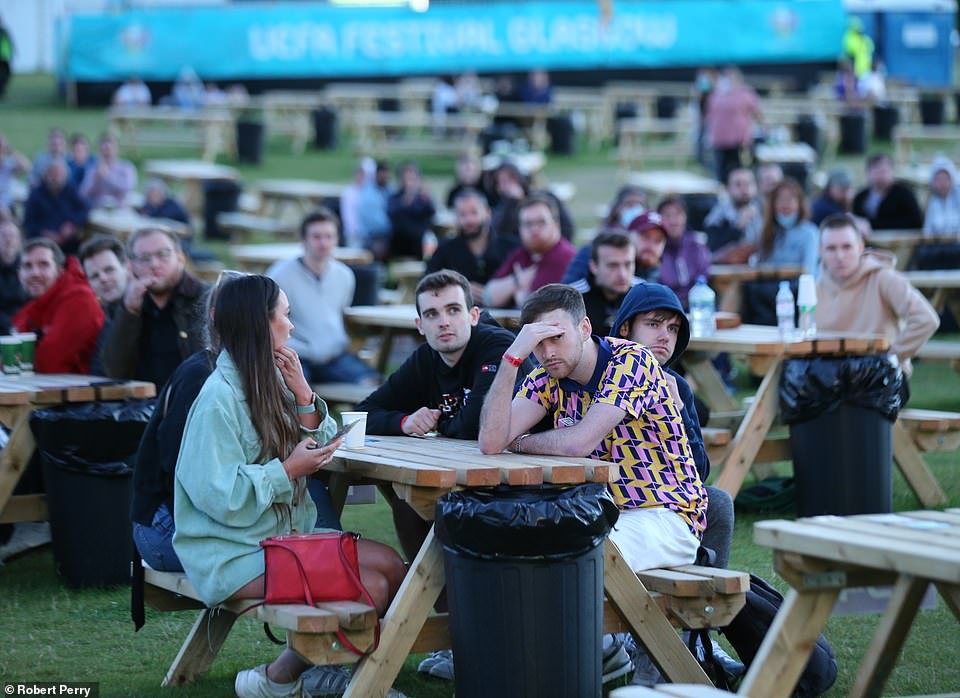 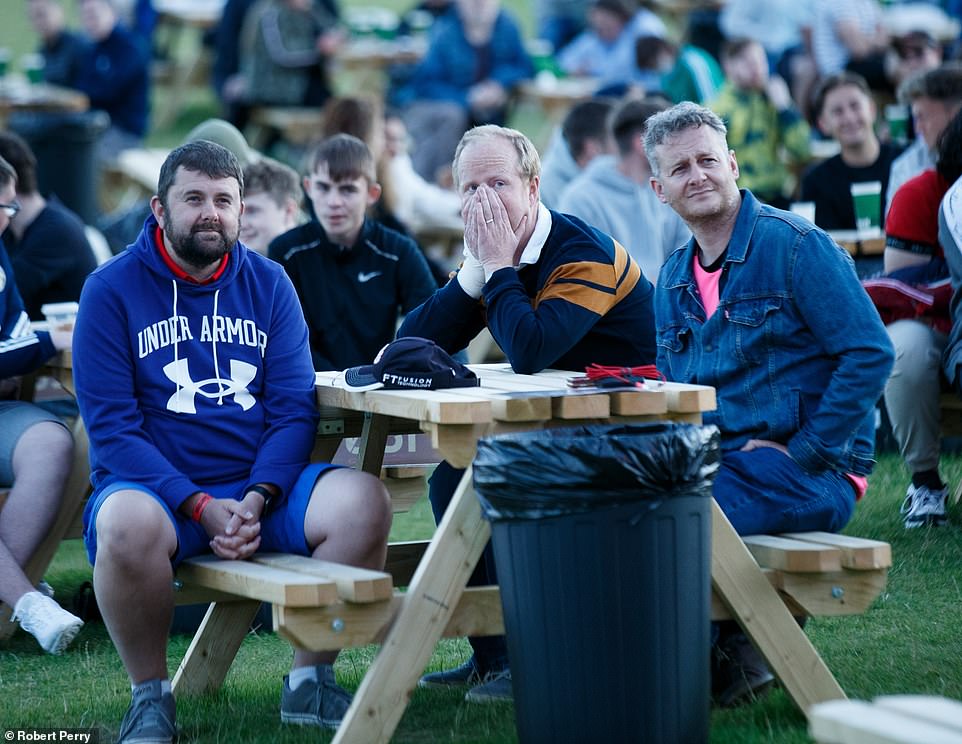 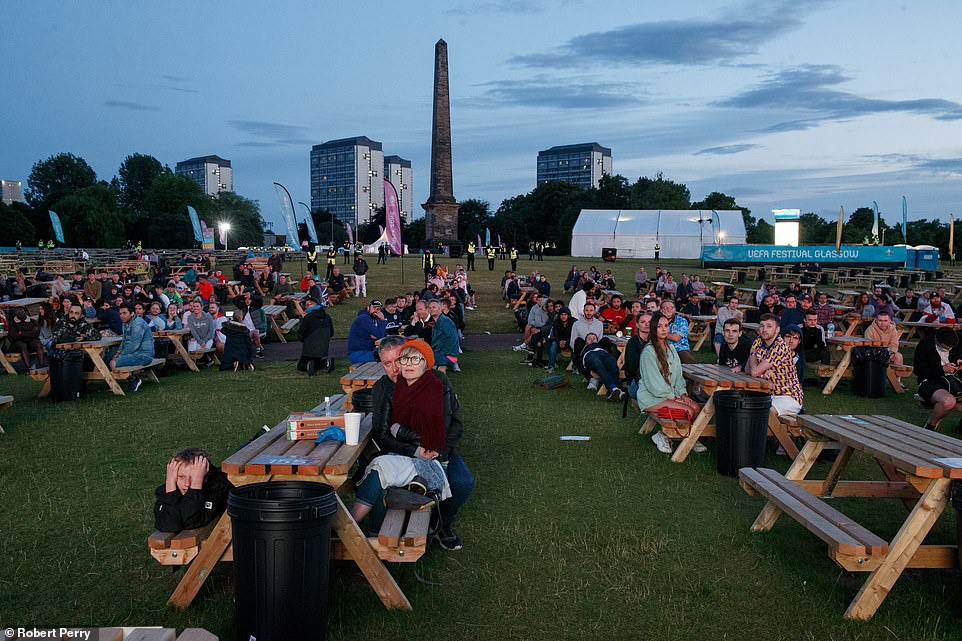 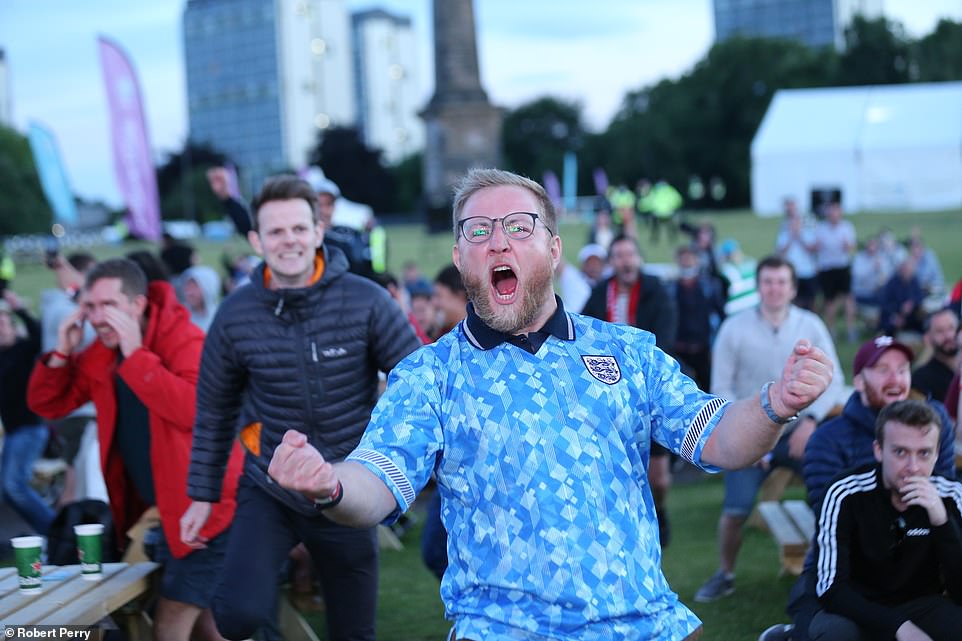 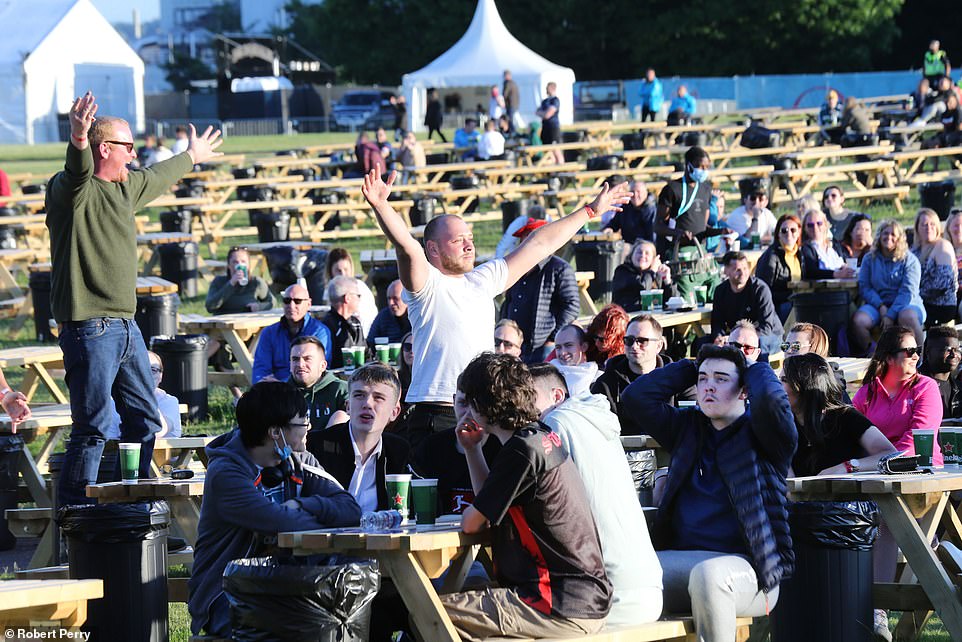 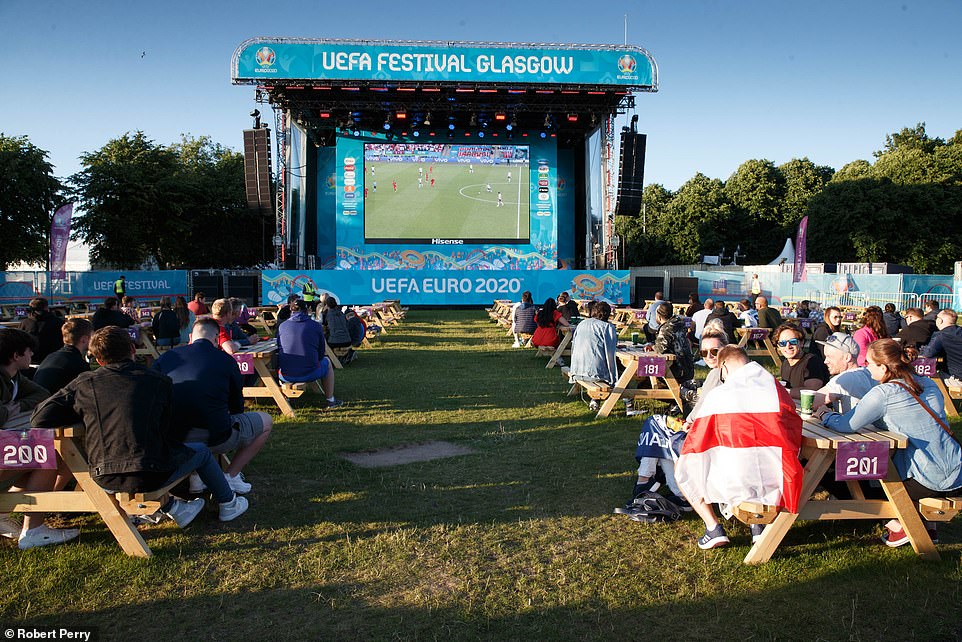 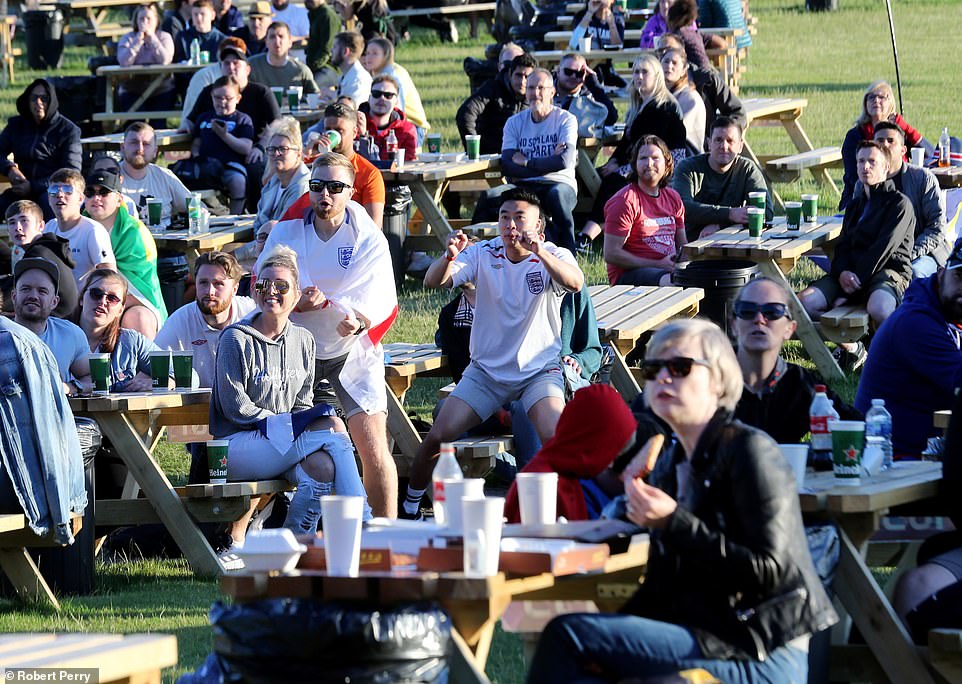 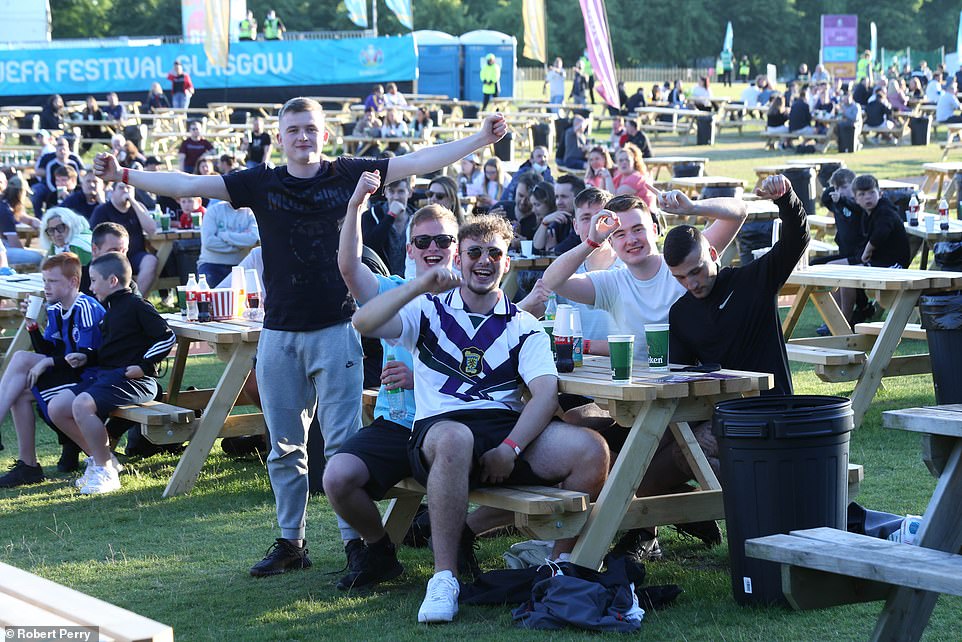 And fans have also took to social media to vent their fury at there being two balls on the pitch just moments before England were awarded their crucial penalty.

Others were also left disappointed with Dutch referee Makkelie’s performance, with one adding: ‘Two balls on the pitch and then Sterling dives… referees are stealing a living,’ while another stated simply: ‘Two balls on the field. Cheatland.’

Another meanwhile added: ‘No contact. Two balls on the pitch. This is like Sunday league stuff. This refs at it’.

Former Czech journalist Filip Horky also weighed in, slamming both Sterling and the officials by posting: ‘Two balls on the pitch and poor diving. Shame on you, #ENG and #UEFA.’

The scenes came after internet searches for Danish flags surged in Scotland in the run up to the game, as scores of fans north of the border choose to support Denmark.

Scottish fans took to the internet to search for a Danish flag ahead of tonight’s game at Wembley, according to Google Trends.

Searches made in Scotland for the red and white flags of Denmark have increased by nearly 10 times pre-Euro 2020 levels, the figures show.

But the ‘Anyone But England’ camp have been left watching on in disappointment as Gareth Southgate’s side continued their march towards glory with wins over Germany and Ukraine.

In the run up to the game yesterday, ex-Three Lions defender Rio Ferdinand left one Scottish fan red-faced after he tweeted him stick over his belief that England could win the tournament.

The former Manchester United defender retweeted the Scottish supporter’s message from two weeks ago calling him ‘arrogant’ for saying that England could win Euro 2020.

However, there has been support from some Scottish celebrities, including ITV chat show host Lorraine Kelly and the Krankies.

And, through gritted teeth, former Labour spin doctor Alastair Campbell – a lifelong ‘Anyone But England’ cheerleader – admitted he was backing England – but only because ‘he liked Gareth Southgate’. 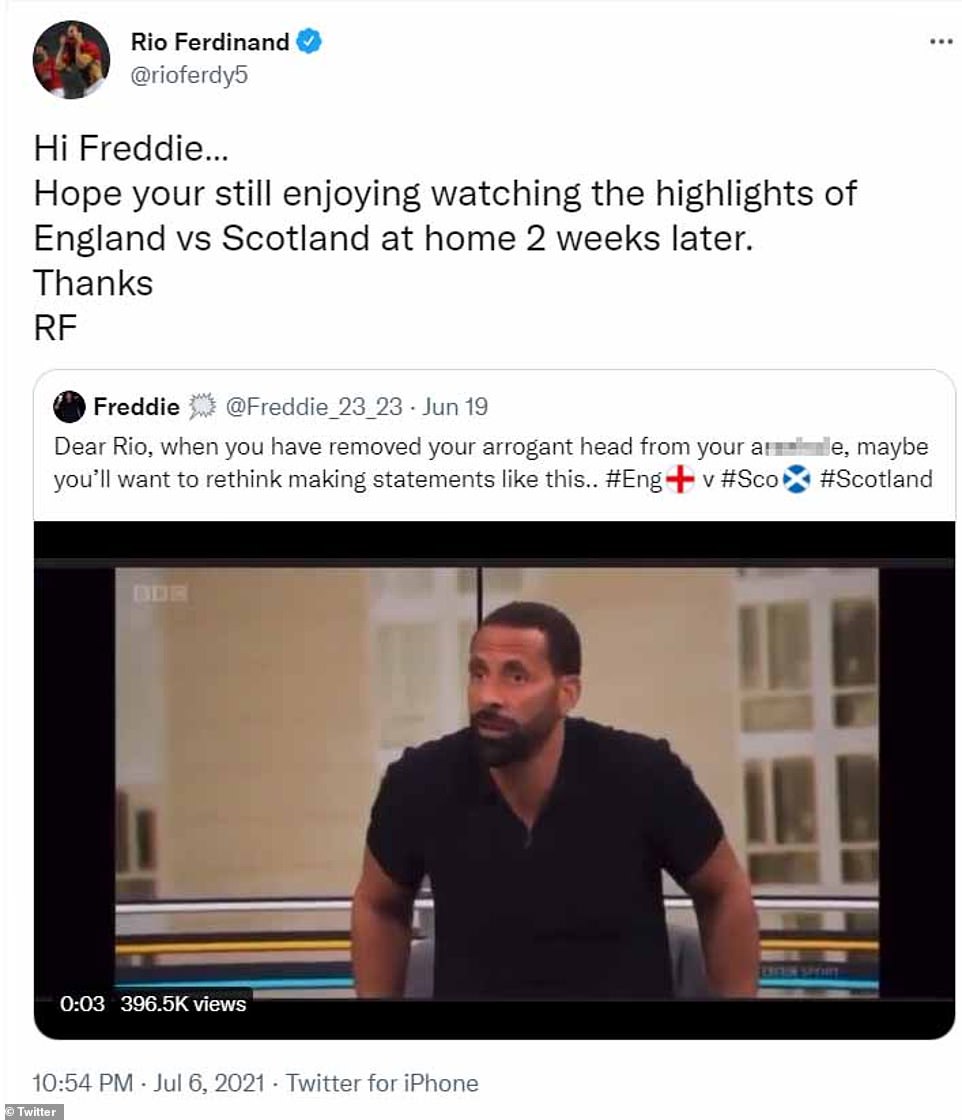 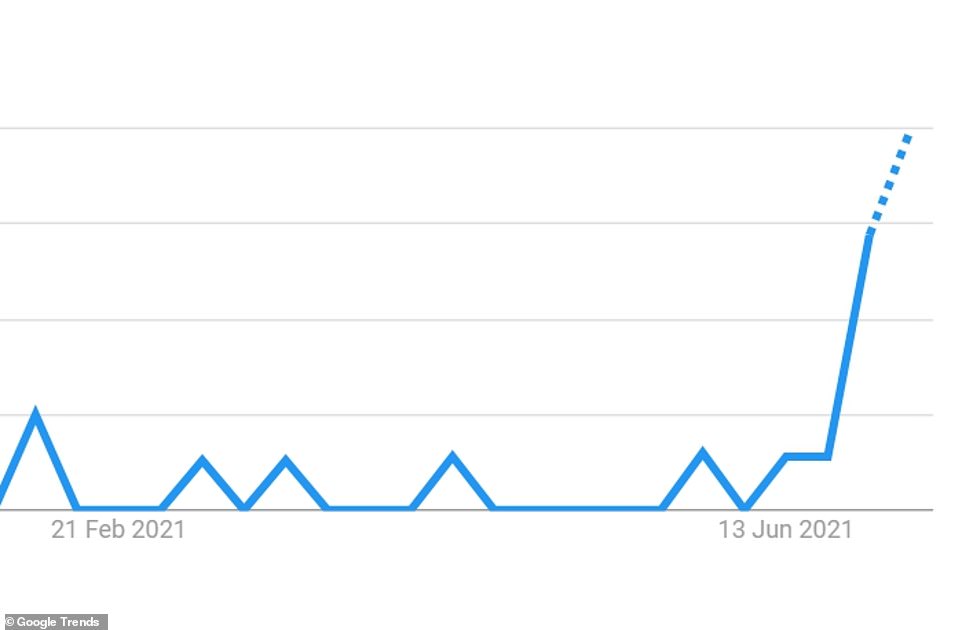 Scottish fans have taken to the internet searching for a Danish flag ahead of tonight’s game at Wembley, according to Google Trends 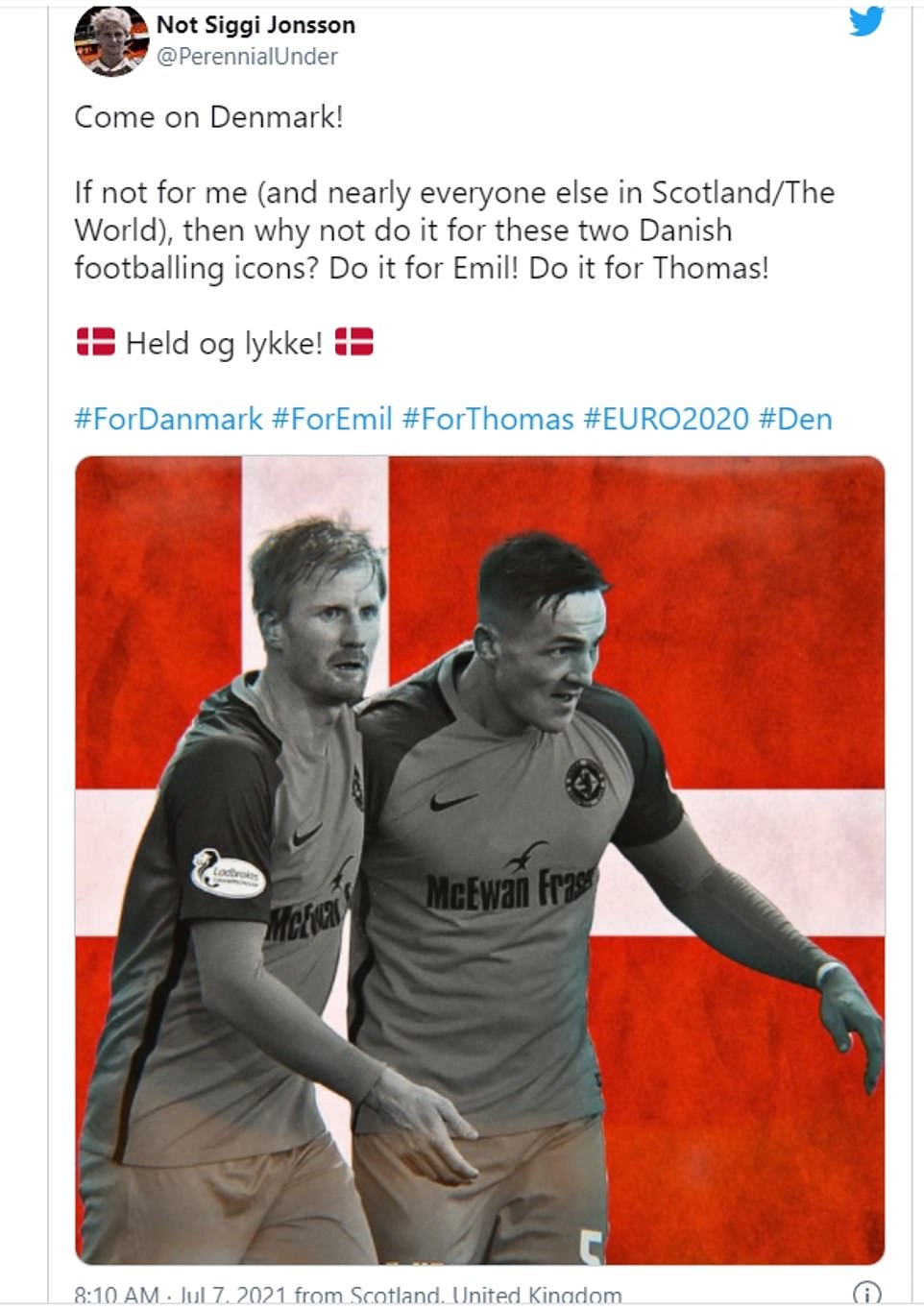 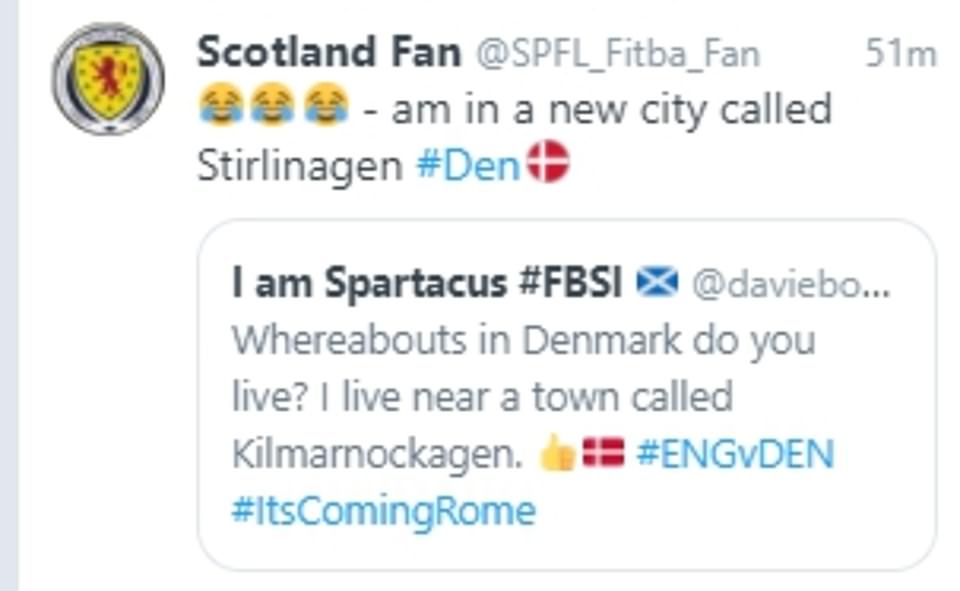 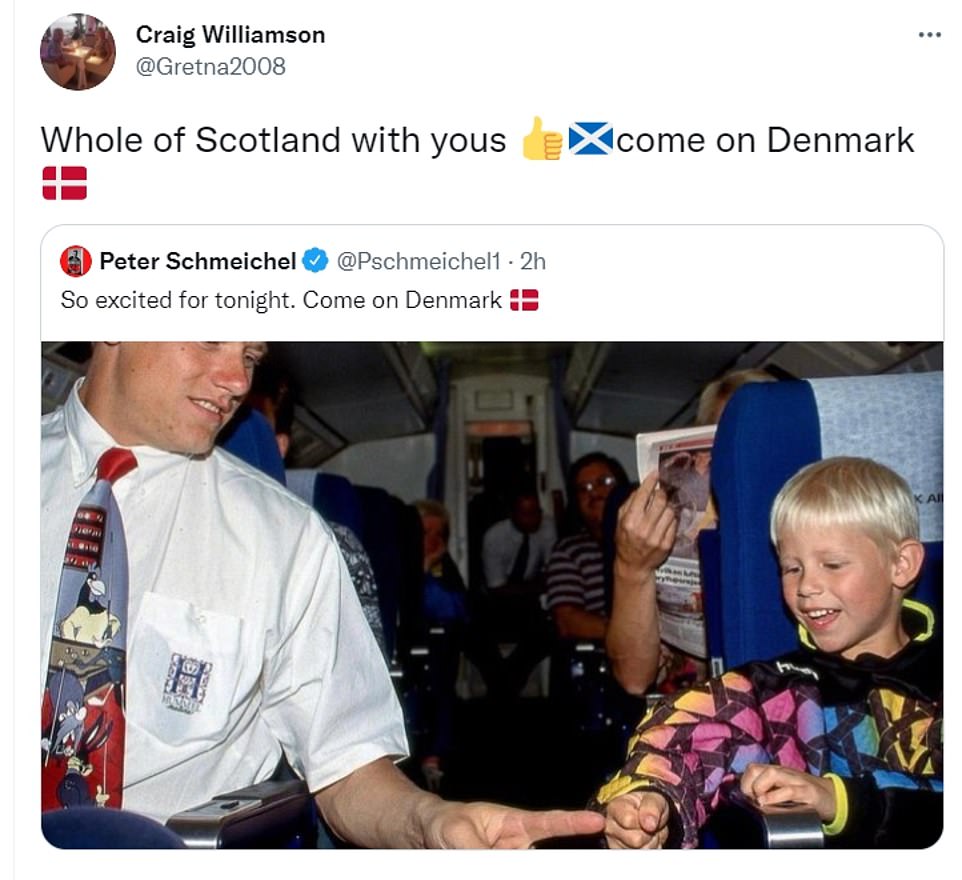 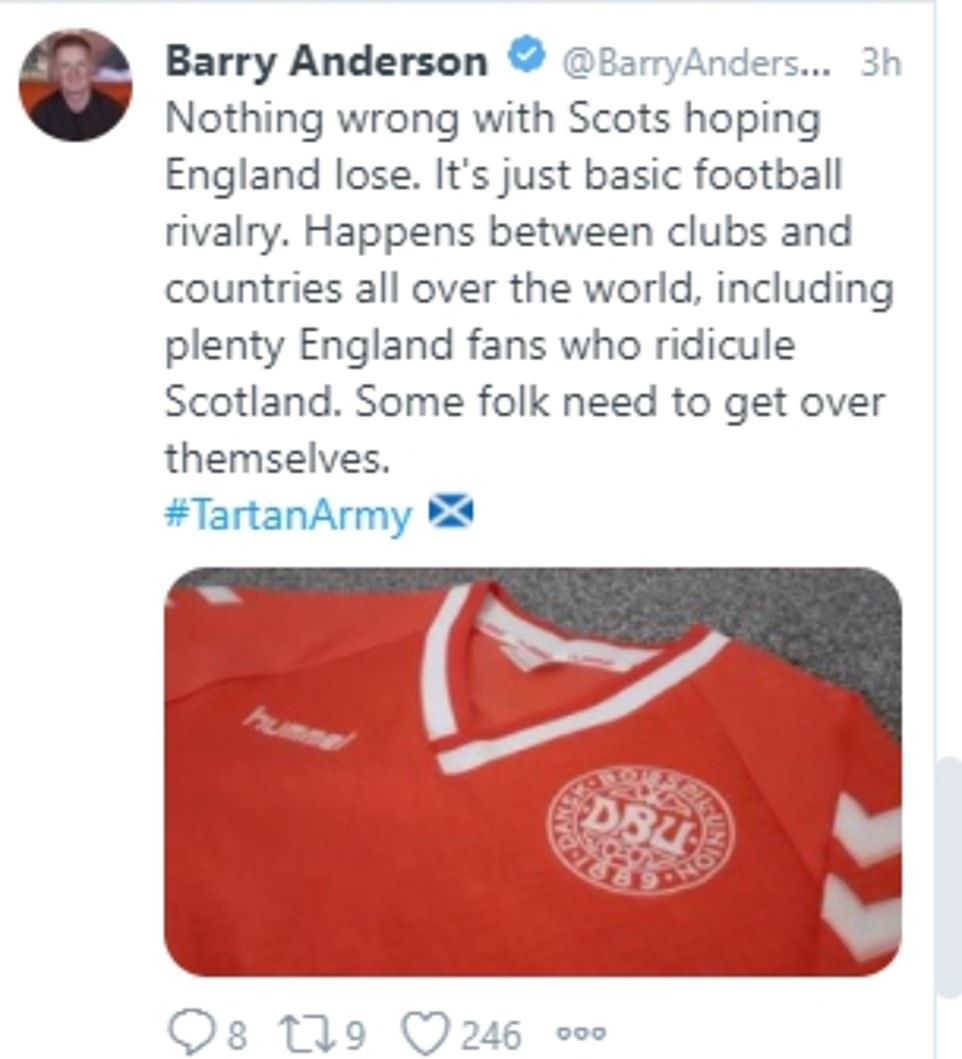 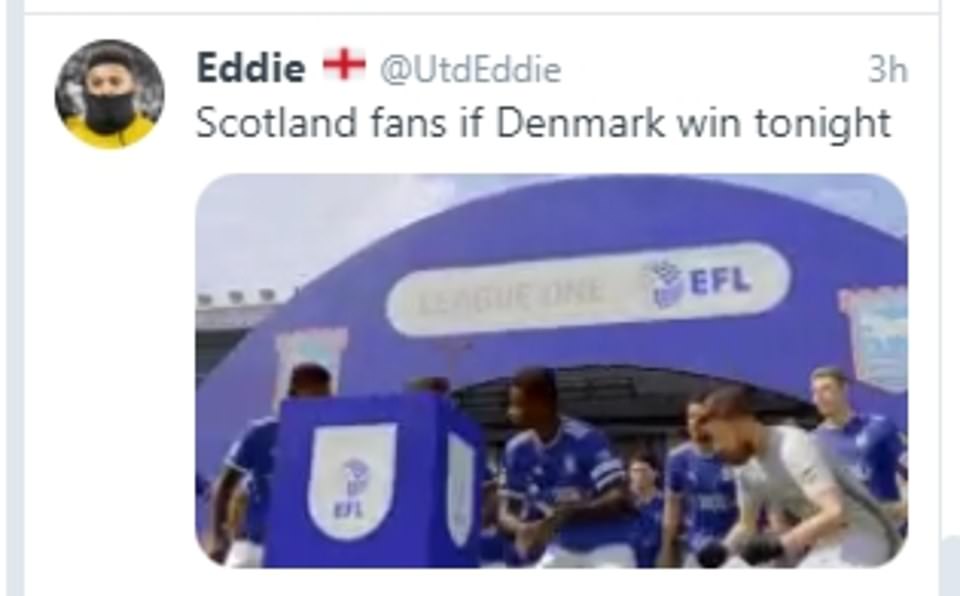 The West-Yorkshire born Scot, 64, made the comment after he butchered the song ‘Three Lions’ with a bagpipe rendition on the ITV show earlier today.

As the rest of the GMB cast and production crew stood and watched, a masked Dr Hilary Jones was left covering his ears.

It came as Rio Ferdinand took on a Scottish fan on Twitter. The Scot tweeted a video of the former Manchester United and England star saying he believed the Three Lions could win Euro 2020.

The fan, who tweeted after the England v Scotland group game last month, said: ‘Dear Rio, when you have removed your arrogant head from your a****e,  maybe you’ll want to re-think things like this.’

But the retired defender hit back, with his tweet mocking the fact that Scotland have since been knocked out of the tournament, while England remain in the hunt for the trophy.

Scottish fans had been singing the ‘Saturday Night’ by the star, real name Sannie Charlotte Carlson, during their brief Euro 2020 campaign.

The star, 51, aid: ‘We need all the support we can get. It would be ama­zing if Scots can back us at home or even in the stadium.

‘My dream is that Denmark win 2-1 and Scotland fans sing Saturday Night at Wembley again.’

Speaking to Good Morning Britain, Smart, 41, the former editor of the Scottish Sun, said: ‘Of course we want the pain to be as severe as possible. Get through the semi-final and lose on penalties in the final, that’s the best result.’

However, the Scottish TV duo the Krankies had a different view, with Jimmy telling Good Morning Britain: ‘We are British and Scottish. I’ll stick behind Britain, whether it’s England, Ireland or Wales we are all one. It’s against the Europeans, we want to win.’

‘To be honest, Denmark is an amazing story but of course I’ll be wanting England to do well. Of course, why wouldn’t I? It’s a great thing.’

Meanwhile, no-nonsense football pundit Graeme Souness, joked that his son had adopted England as his national team to support.

Speaking in the ITV studio, he said: ‘My son goes to the games with his England shirt on singing ‘Football’s Coming Home’ – it’s hard at home at the moment!’

It comes after the former football, who earned more than 50 Scotland caps, begrudgingly stated that Three Lions are set to win Euro 2020, saying that the ‘stars had aligned’.

However scores of Scotland fans today remained in the ‘Anyone But England’ camp and admitted they were supporting Denmark tonight, with one saying: ‘Cmon the Danes! From Scotland.’

Another added: ‘I’ll be supporting Denmark in the England v Denmark Euro semi-final. Giving my backing to a fellow North Sea country, and a country that didn’t take Scotland’s EU citizeship away against Scotland’s will.

‘Yeah, I know, but all sport is politics.’

One Scottish fan also retweeted a picture of a young Kasper Schmeical posted by his father Peter Schmeichel – the former Denmark and Manchester United stopper.

Retweeting the picture, the fan wrote: ‘Whole of Scotland is with yous. Come on Denmark.’

Another added: ‘Do this for Denmark, Scotland and the World!!!’.  And it’s not just Scottish fans that are supporting Denmark, Irish fans are too.

Irish born Stoke midfielder James McClean provoked fury from England fans when he pictured himself wearing a Germany top ahead of England’s clash with the Die Mannschaft last weekend.

And the anti-English sentiment from the Irish continued today, with Dublin Airport tweeting its support for Denmark.

In the tweet, it said: ‘We’re stilling mastering the basics, but the phrase you are looking for might be: ‘kom nu Danmark’ (Come on Denmark’ 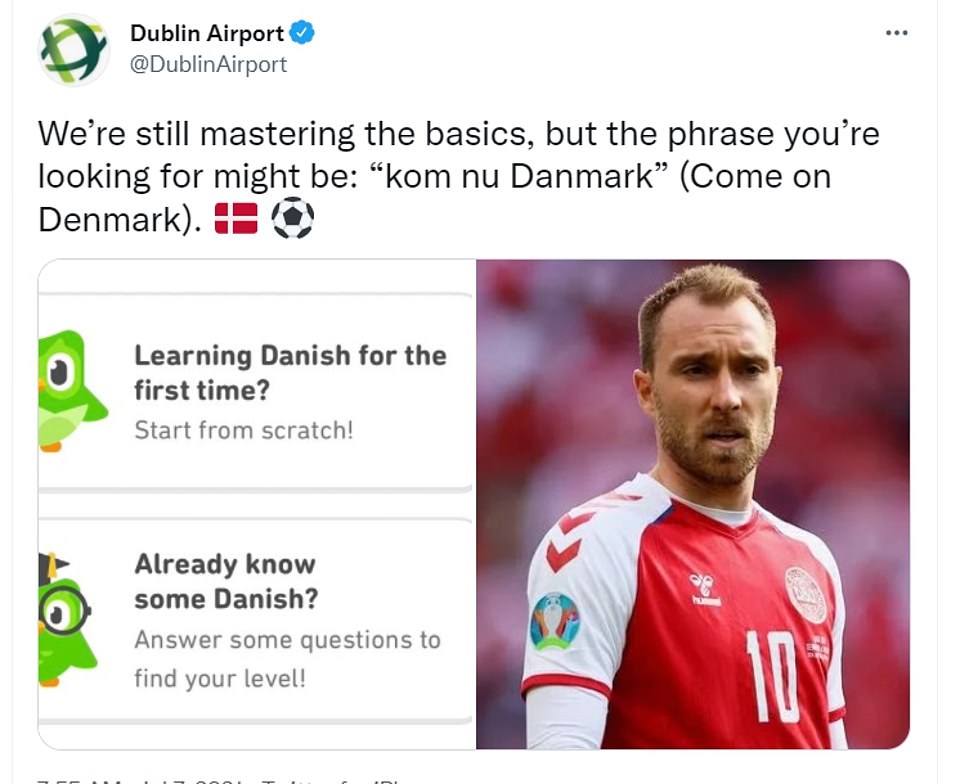 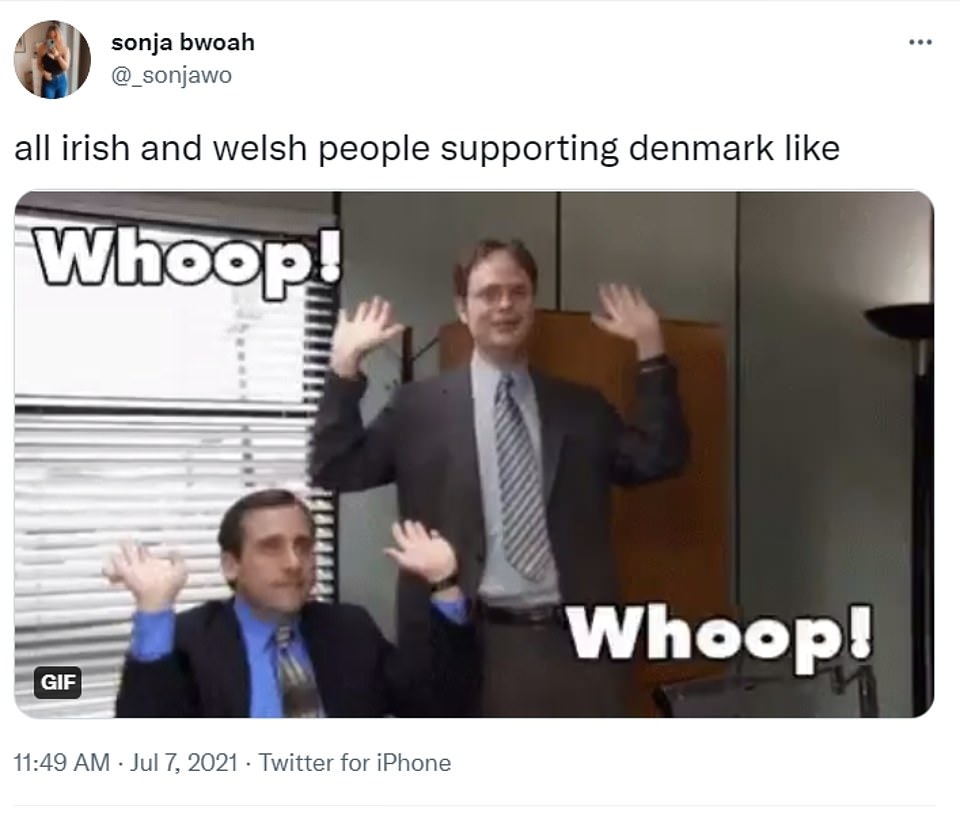 He was asked by a journalist what it would mean to ‘stop football coming home’, and replied: ‘Has it ever been home? I don’t know, have you ever won it?’

Denmark, who are currently ranked 10th in the Fifa world rankings, have previously won the European Championships.

Against the odds, they lifted the trophy in Euro 1992 – when Kasper’s father Peter was playing in goal for the Danes.

England’s national team have never won the European Championships, with the 1966 World Cup win their only major international triumph.