Scientists are baffled as killer whales launch spate of ‘attacks’ on boats off Spain and Portugal, leaving at least one crewman hurt

A spate of attacks on boats in Spanish and Portuguese waters by killer whales have confused scientists and left at least one crewman injured.

In just the last two months, two boats have lost parts of their rudders after being attacked by killer whales.

The attacks also left the boats with serious damage and one crew member sustained bruising after the killer whales rammed their vessel, the Guardian reports. 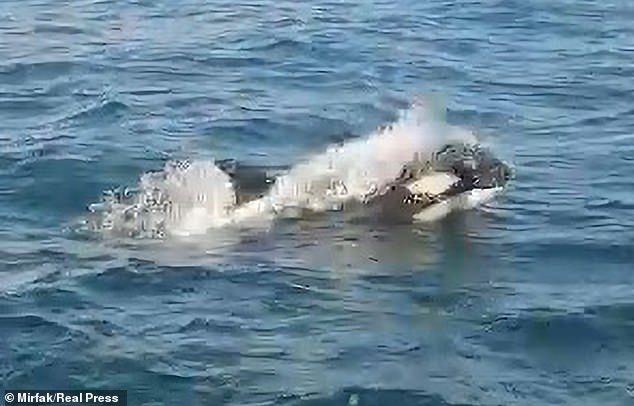 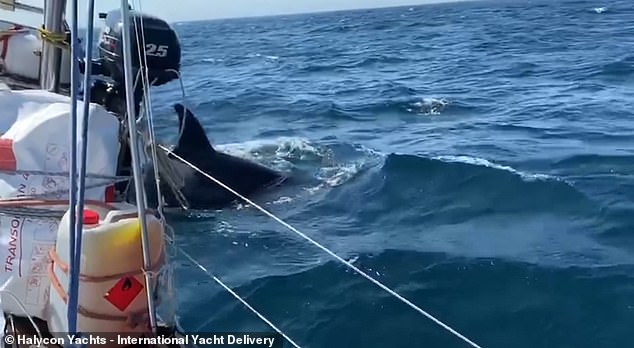 The killer whale rammed the boat at least 15 times causing it to lose steering. It had to be towed back to port to be assessed for damages

In the most recent incident, Halcyon Yachts were taking a 36ft vessel to the UK from A Coruña in northern Spain when a killer whale rammed it at least 15 times.

A video posted on YouTube by Halcyon Yachts shows a killer whale swimming near the boat.

The vessel lost steering and had to be towed back to port because of the attack.

Around the same time a radio warning was issued after killer whales were spotted near Vigo where two other recent collisions had taken place.

Alfredo López, a biologist from the Coordinator for the Study of Marine Mammals in Galicia, told the paper that killer whales make their way up the Spanish-Portuguese coastline every year in September.

A similar collision was recorded on August 30 when a French vessel contacted the coastguard after being attacked by the killer whales.

This was followed on the same day by a Spanish naval yacht, Mirfak, also coming under attack.

Earlier in the year, on July 29, nine killer whales surrounded a delivery boat near Cape Trafalgar before ramming the boat, spinning it round and breaking the rudder.

Victoria Morris who crewed the boat said that the incident had felt ‘orchestrated’.

In the same week, another boat was targeted by the animals and the attack nearly dislocated the shoulder of the helmsman. 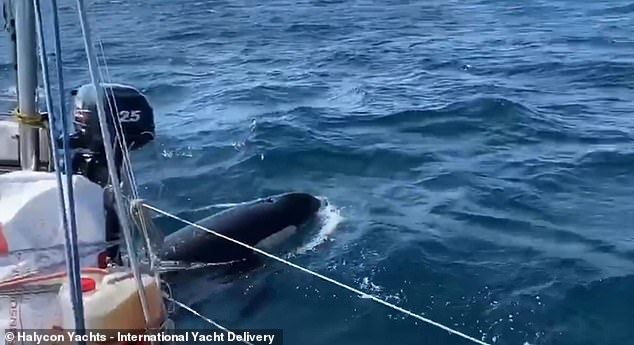 Earlier in the year, on July 29, nine killer whales surrounded a delivery boat near Cape Trafalgar before ramming the boat, spinning it round and breaking the rudder. Pictured: A killer whale ‘attacks’ the Halcyon Yacht vessel this month

A British couple, Beverly Harris and Kevin Large, were on a 40ft yacht at 11.30pm the previous day and they too were attacked.

It is currently not known whether the same pod of killer whales is carrying out all of these attacks but Dr Ruth Esteban, a Gibraltar orca expert, says that it is unlikely that different groups would carry out such similarly organised attacks.

The Spanish maritime authorities have warned boats to keep their distance from killer whales but some sailors claim that the animals chase boats passing through the area.

The killer whale, or orca, is the largest member of the dolphin family with a complex diet that sees different groups of the animal eating different prey.

Generally killer whales are not considered to be a threat to humans.