Announcement comes a day after Yemen’s PM offered to resign if it meant it could help lead to an investment of funds. 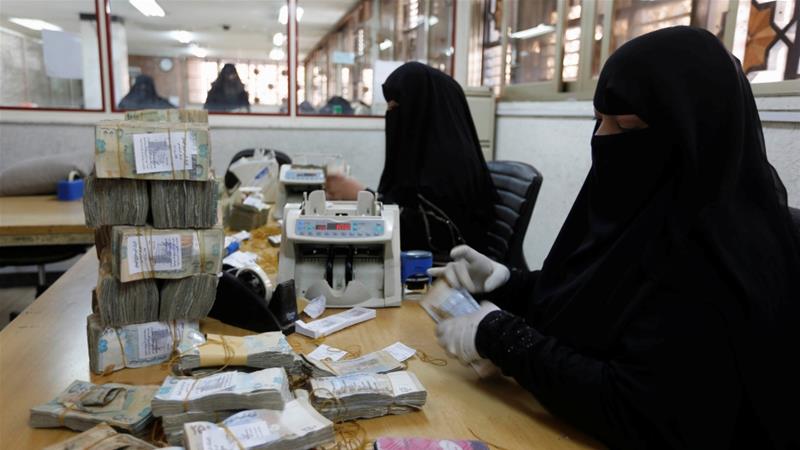 Saudi Arabia has said it will inject $2bn in Yemen’s central bank to shore up the war-torn country’s depreciating currency, according to Saudi state media.

The announcement on Wednesday, which was reported by SPA news agency, comes a day after Yemen’s prime minister pleaded with Riyadh to help – and even offered to step down if it meant it could lead to an injection in funds.

For nearly three years, a Saudi-led coalition has embarked on a bombing campaign in Yemen with the aim of dislodging Houthi rebels who control the capital and much of the north and restoring to power the internationally-recognised government of exiled President Abd-Rabbu Mansour Hadi.

The $2bn, which was first pledged by the kingdom in November last year, would be deposited in Yemen’s central bank (CBY) as per a royal decree, said SPA.

“As the value of the [Yemeni] riyal goes up, the living conditions of Yemeni citizens will change for the better,” the Saudi statement said.

It was not immediately clear when the transfer would be carried out.

The conflict in Yemen, the Arab world’s poorest, is having a devastating effect, leaving millions in need of humanitarian assistance and causing a major cholera outbreak.

As war rages, prices have skyrocketed and millions of people are struggling to access basic necessities such as food, water and fuel.

On Tuesday, the Yemeni riyal fell to an unprecedented low of 500 riyals to one US dollar, losing more than half its value since September 2014 when Houthi fighters seized Sanaa and ousted Hadi’s government.

Amal Nasser, a Yemeni economist at the Sanaa Center for Strategic Studies, said the Saudi announcement was a “good start” but would not be a “game-changer”.

“What this will do is limit devaluation and bring the riyal back to its former value,” she told Al Jazeera.

Yemeni Prime Minister Ahmed bin Daghr, who is based in Aden, had appealed on Tuesday for urgent economic support from its neighbouring Gulf countries.

“The salvation of the riyal means saving the Yemeni people from imminent starvation,” he wrote on Twitter.

The Hadi-appointed prime minister pressed for quick intervention from the Saudi-led coalition bombing Yemen and even offered his resignation if this would help sort the problem.

“Interfere in saving the Yemeni rial now and not tomorrow,” he said

In 2016, after being forced into exile in the Saudi capital Riyadh, Hadi issued a decree to move Yemen’s central bank (CBY) from the Houthi-controlled Sanaa to the southern port city of Aden.

Since then, both banks have suffered from a liquidity crisis and depleted currency reserves.

According to the Yemeni government, the Saudi-led coalition has refused to deliver air shipments of cash on 13 occasions – a rare airing of a grievance by the government to its main backer.

As a consequence, for the last 18 months, the Yemeni government has been unable to pay civil servants their regular salaries and failed to mitigate famine and disease.

“The Saudis and are not happy with the current administration and this could be why they waited until now, instead of November, to make this announcement,” said Nasser, the economist.

“Either way, the CBY needs to provide hard currency in the market to limit the influence of the black market.

“The supply of food has dramatically decreased because of the nearly three years of war. People cannot afford basic commodities and this has led to inflationary prices.

“And with imports needing hard currency, and legal channels no longer working, the Yemeni people have had to resort to the black market.

According to the UN, at least 10,000 people have been killed in Yemen’s war and tens of thousands of others have been maimed and wounded.