Sao Paulo: Brazilian President Jair Bolsonaro has asked protesters and trucks to unblock roads nationwide to let deliveries and the economy flow, but did not address their demands for military intervention to overturn his election loss. 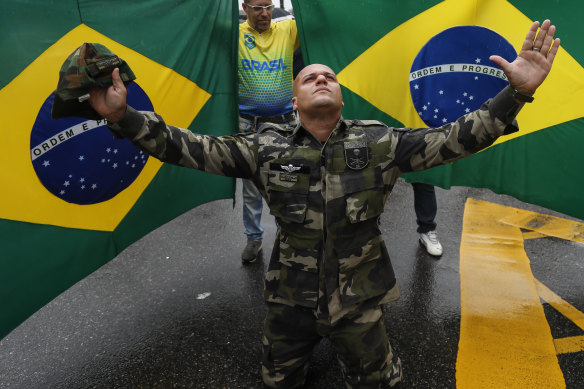 A Bolsonaro supporter dressed in fatigues, kneels in front of national flags in Rio de Janeiro, during a protest against his defeat in the presidential election.Credit:AP

In a video posted on social media, Bolsonaro said he was sad and understood people’s frustration at the result.

“I know you are sad… Me too. But we have to keep our heads straight,” he said. “I will make an appeal to you: clear the highways.”

The president said blocking roads make the ongoing protests illegitimate. He encouraged people to choose other ways to demonstrate saying they had a right to as part of the democratic process. He added: “Don’t think ill of me”. 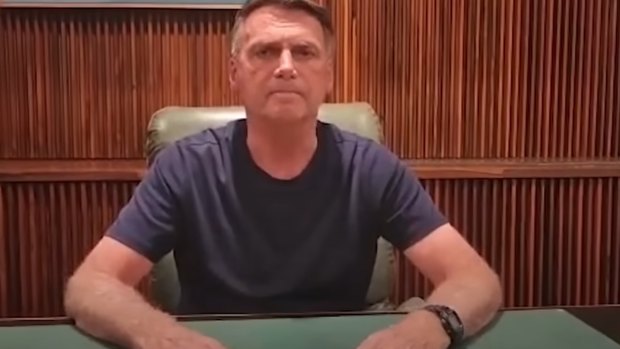 His plea came as thousands of supporters held rallies to call for an armed forces’ intervention following his loss to Lula, a move that military experts say is out of the question. Bolsonaro lost the ballot garnering 58.2 million votes (or 49.1 per cent) to Lula’s 60.3 million (50.9 per cent) in a run-off ballot.

Similar rallies were held in 24 of the 26 states, as well as the capital Brasilia, according to Brazilian online media portal G1.

“We hope the army will intervene in this situation, we know those elections were fraudulent,” claimed Reinaldo da Silva, 65, a retired government worker at a rally at the entrance to a Sao Paulo army barracks. 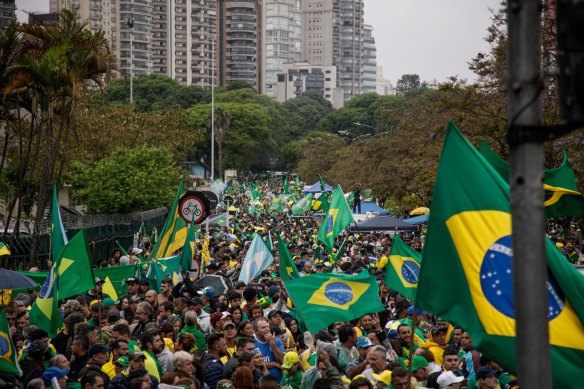 Bolsonaro supporters during a protest at the Military Police Command Headquarters in Sao Paulo on Wednesday.Credit:Bloomberg

In response to a request for comment, the Defence Ministry said peaceful demonstrations were part of free expression under Brazilian law, adding that it “was guided by the Federal Constitution”.

Bolsonaro, a former army captain, has cultivated strong ties to the military since his 2018 election, winning over the political sympathies of some top brass.

Like many politically conservative Brazilians, he has often waxed nostalgic for the 1964-1985 military dictatorship. Lula, by contrast, was jailed in the 1970s for protesting against the military government.

But the armed forces have been wary of direct involvement in politics since the dictatorship, which left the country in economic chaos.

Paulo Chagas, a retired cavalry general who campaigned for Bolsonaro in 2018, said in a message to Reuters: “The military know full well what their duty is: the constitution does not allow them to intervene in politics.”

Bolsonaro added the Federal Highway Police (PRF) had mobilised to help dispel protesters and clear roads but they were overwhelmed because protests were taking place on multiple locations. “The difficulties are enormous.”

Although smaller than in previous days, the truckers protests were still likely disrupting fuel distribution, industrial activity, food deliveries to supermarkets and shipments of grains to ports.

Anvisa, the national health agency, warned that the blockades could lead to shortages of medical supplies.

Police said 732 roadblocks had been cleared across the country, though roads remained blocked or partially blocked in 14 of Brazil’s 26 states, most notably in farm states like Santa Catarina and Mato Grosso, where Bolsonaro has strong popular support.

In earlier remarks, the Brazilian president said the protests resulted from “indignation and a sense of injustice” over the vote. But he had stopped short of explicitly asking his supporters to take down the blockades.

Truckers, a key Bolsonaro constituency that benefited from his policies to lower fuel prices, have disrupted the Brazilian economy by shutting highways before.