Ryanair’s boss has branded the traffic light system ‘monstrously stupid’ and called for it to be scrapped so the UK can ‘return to normality’.

Michael O’Leary, 63, suggested replacing the scheme with a ‘simple’ policy that allows unrestricted entry for double-jabbed passengers from Europe.

The Irish businessman said travellers who have received one or neither of the vaccine doses should still have to take a PCR test.

Currently, arrivals in England from low-risk ‘green’ countries and medium-risk ‘amber’ locations must take two Covid tests, even if they are fully vaccinated.

Meanwhile, all travellers coming from red-list destinations must quarantine in a hotel for 10 days and take three tests.

The comments come amid Heathrow Airport’s fourth day of queueing chaos, with passengers facing yet more huge waits at the border. 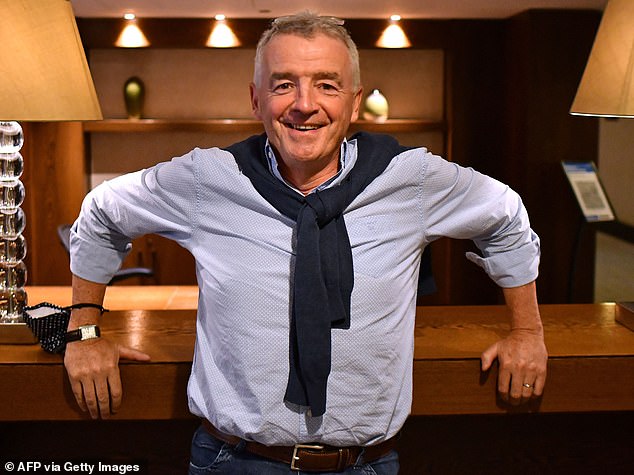 Ryanair’s boss Michael O’Leary (pictured above), 63, suggested replacing the scheme with a ‘simple’ policy that allows unrestricted entry for double-jabbed passengers from Europe 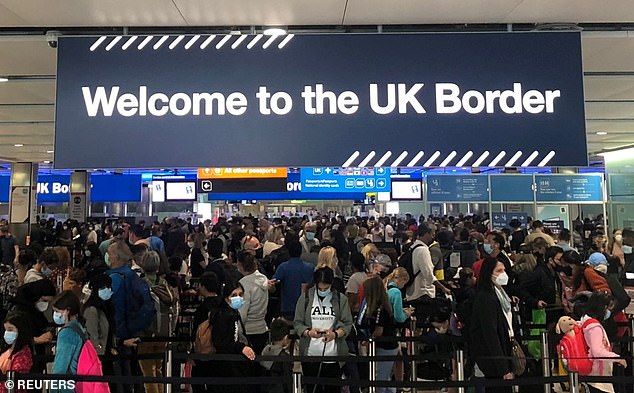 Queues of people wait in line at UK citizens arrivals at London’s Heathrow Airport today. Yesterday, one traveller said a queue for families with children had lasted three hours

Mr O’Leary told The Independent: ‘The traffic light system needs to be scrapped.

He added: ‘This monstrously stupid system, that requires passengers from Europe to be double vaccinated and get a PCR test, doesn’t help deal with the Covid problem.’

The Ryanair chief then demanded a ‘return to normality’.

A spokesperson for the Department for Transport (DfT) said: ‘Our top priority is to protect public health – decisions on our traffic light system are kept under regular review and are informed by the latest risk assessment from the Joint Biosecurity Centre and wider public health factors.

‘We recognise the challenging times facing the travel sector, which is why we have committed around £7billion of support by September 2021 and continue to work with industry to help them navigate this difficult period.’

It comes as the airline expects annual passenger numbers to reach ‘close to 100 million’ this year compared with 149 million before the virus crisis, and exceed pre-pandemic levels next summer.

Ryanair announced that it will operate 14 new routes from London airports this winter. 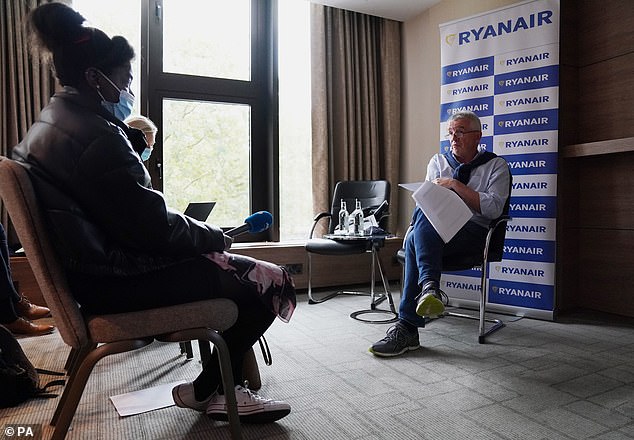 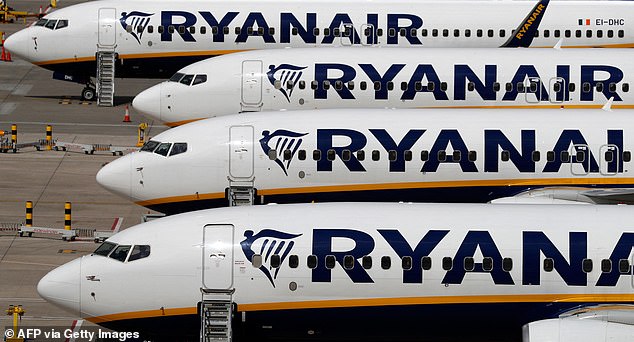 Ryanair said the announcement will create more than 500 jobs for pilots, cabin crew and engineers at its London airports (file photo)

There will ‘never be a better time’ to book a winter break, according to the boss of Ryanair.

Michael O’Leary said air fares will be ‘much lower’ than before the coronavirus pandemic while demand recovers.

He told reporters at a press conference in central London: ‘There has never been a better time to go away on winter breaks, (visit) Christmas markets, city breaks, than there will be this winter because there’s going to be lots of capacity at very cheap prices.’

Mr O’Leary said the airline has seen a ‘very dramatic recovery in traffic’ over the summer.

It expects annual passenger numbers to reach ‘close to 100 million’ this year compared with 149 million before the virus crisis, and exceed pre-pandemic levels next summer.

From Stansted it will serve Helsinki and Tampere in Finland; Oradea in Romania; Stockholm, Sweden; Trapani and Treviso in Italy; and Zagreb, Croatia.

The locations which will be served from Luton are Fuerteventura and Gran Canaria in Spain’s Canary Islands; Grenoble, France; Naples and Turin in Italy; and Shannon, Ireland.

A new link to Malaga in Spain will open at Gatwick.

Ryanair said the announcement will create more than 500 jobs for pilots, cabin crew and engineers at its London airports.

Meanwhile, Britons rushed to snap up bargain flights to Italy after the country said it would drop Covid-19 quarantine rules for double-jabbed UK arrivals from today.

The most booked cities since the changes were announced on Saturday have been Rome, Milan, Naples and Venice – with £11 return flights still available in September.

Flight comparison website Skyscanner said it had seen a week-on-week increase of 214 per cent in searches for flights from Britain to Italy, as well as a 48 per cent rise comparing the day before and after the announcement.

However, pictures and video taken around midday have shown long, snaking lines of travellers packed closely together with no social distancing at Heathrow.

The Home Office has continued with its unapologetic stance despite widespread public fury, with a spokesman yesterday saying travellers would ‘need to accept’ increased wait times due to high summer demand and the need to check Covid documents.

Long queues at immigration has been a problem at Heathrow numerous times this summer. The issue flared up again on Sunday – with some passengers reporting waits of up to five hours – and is now into its fourth consecutive day. 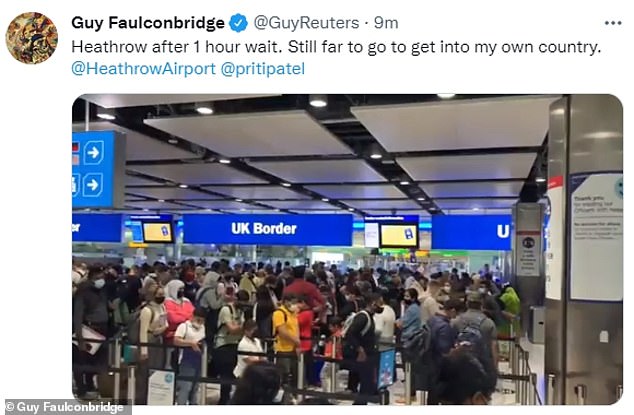 Journalist Guy Faulconbridge posted an image taken an hour after arriving at Heathrow, showing the line had barely budged

Yesterday, one traveller wrote on Twitter that a queue for families with children had lasted three hours.

Another described the wait for families as ‘shameful’, adding that the UK ‘must be the only country which treats families worse than adults’.

On Monday a passenger said the immigration process in Terminal 2 was ‘incompetent, ridiculous’, adding that he was forced to wait for more than five hours with ‘no water, no bathroom’.

It added: ‘Waiting times at the border have on occasion been unacceptable and we have called on the UK Government to address the problem as a matter of urgency.’