Russian opposition to Putin’s mobilisation continues to grow, with families fleeing to Georgia to escape conscription and more than 2,000 protesters arrested nation-wide since Wednesday.

And now even Vladimir Putin’s allies are speaking out against the way civilians are being conscripted, with officers having resorted to using stun guns and truncheons on protesting crowds in recent days.

The speaker of Russia’s upper house Valentina Matvienko said ‘such excesses are absolutely unacceptable’, adding: ‘I consider it absolutely right that they are triggering a sharp reaction in society.’

But she did try to deflect the blame away from the Kremlin, arguing that the governors of Russia’s 85 federal regions held ‘full responsibility’ for enforcing the conscription order.

And Margarita Simonyan, the head of the pro-Putin state-owned Russia Today media group, posted examples of violations on her Telegram channel, including a doctor with no previous military experience being told he would have to operate a grenade launcher.

In the mainly Muslim area of Dagestan today, videos shared to social media show women in head scarves chasing police away from a rally and standing in front of police cars carrying detained protesters, demanding their release.

Dozens of women chanted ‘No to war!’ in the Dagestani capital of Makhachkala, while police fired warning shots to disperse more than 100 people who blocked a highway in the region in an attempt to prevent their men being mobilised.

OVD-Info group, an independent Russian human rights monitor, said it was concerned by reports of ‘very tough detentions’ occurring in the region. 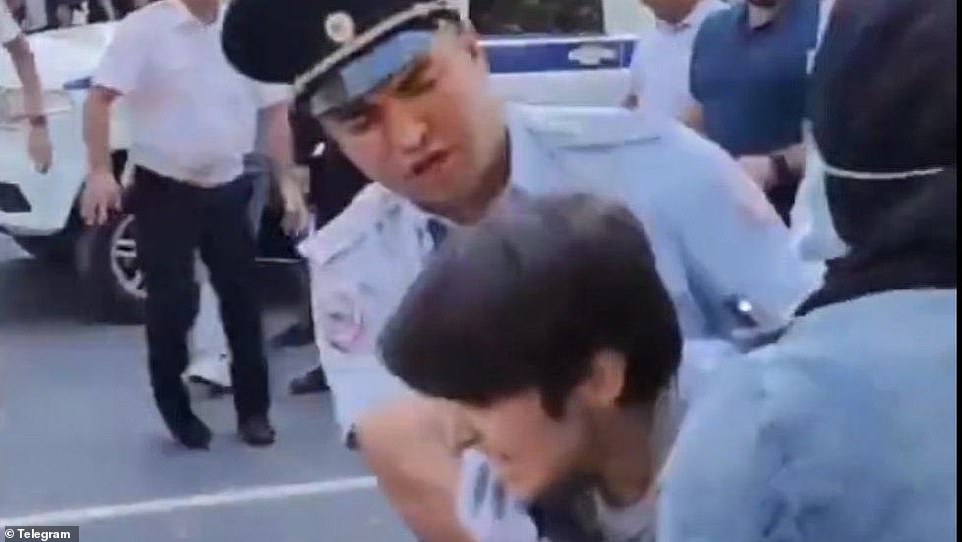 Videos shared to social media shows locals tussling with officers in the Dagestani capital of Makhachkala, where dozens of women chanted ‘No to war!’ at a protest against mobilisation 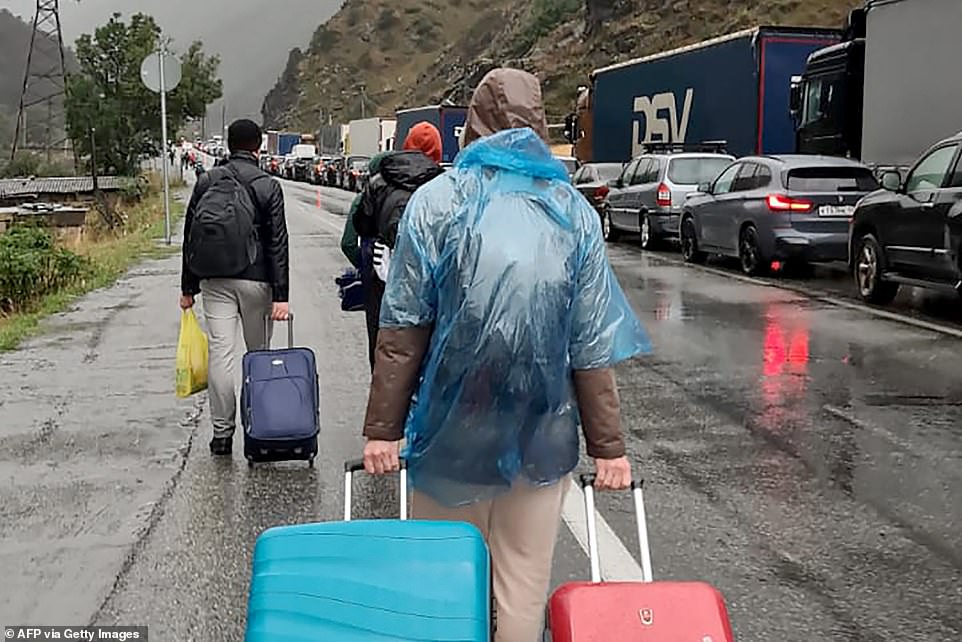 Meanwhile, thousands have opted to instead flee to neighbouring countries, with photos showing people dragging suitcases across the Georgian border

Women also protested in the Siberian city of Yakutsk, chanting ‘No to genocide!’ and marching in a circle around police, who later dragged some away or forced them into police vans, according to videos shared by Russian media.

At least 2,000 people have been arrested in recent days for similar demonstrations around Russia. Many of those taken away have immediately received a call-up summons.

Thousands have therefore opted to instead flee to neighbouring countries, with photos showing people dragging suitcases across the Georgian border.

Those fleeing, wearing ponchos and raincoats, walk past vehicles with Russian licence plates near the Nizhniy Lars customs checkpoint between Georgia and Russia.

Russian authorities acknowledged a ‘significant’ influx of cars trying to cross from Russia into Georgia today, with one official saying there is ‘significant congestion of private vehicles… around 2,300’. 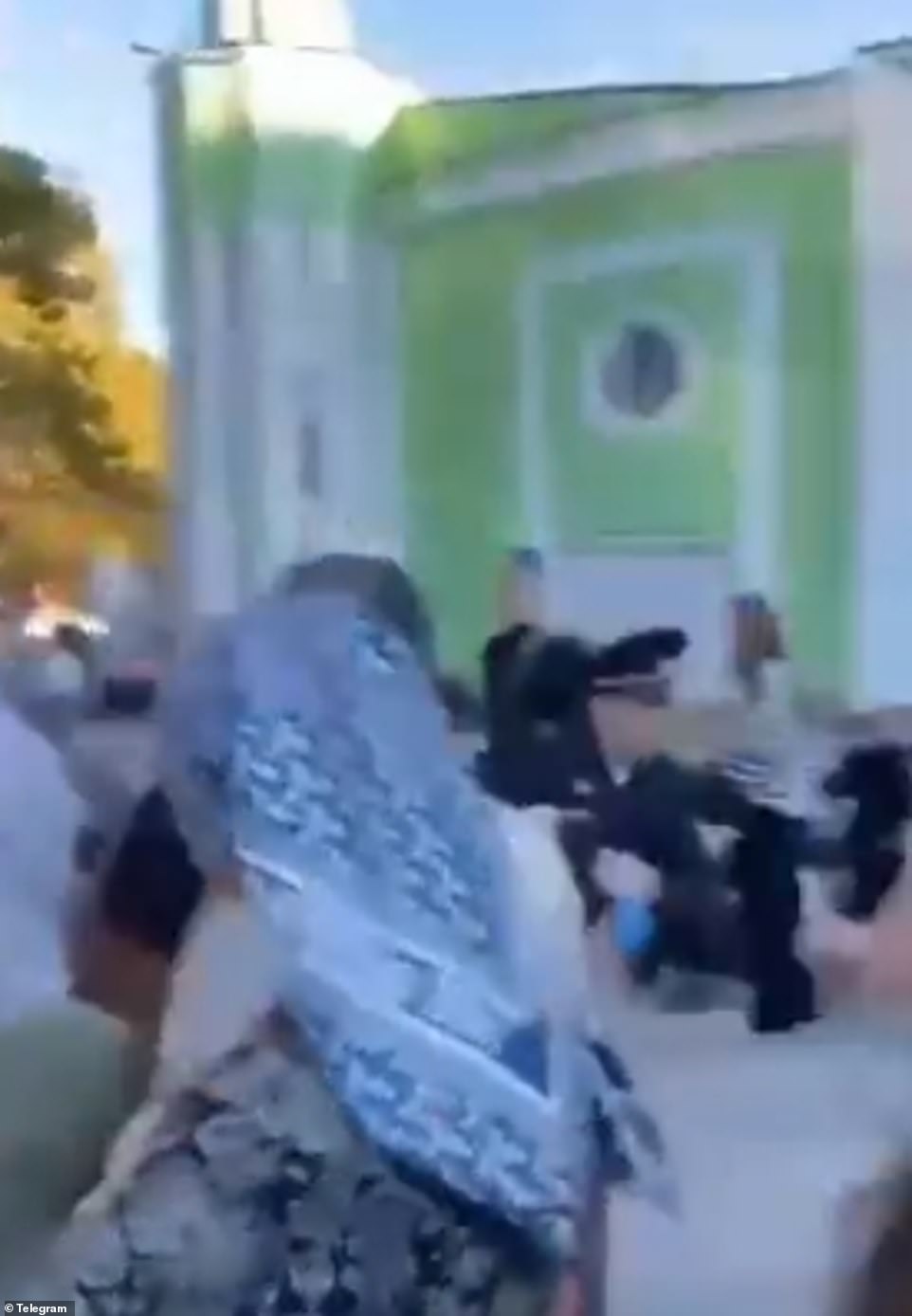 In the mainly Muslim area of Dagestan, videos shared to social media show women in head scarves chasing police away from a rally 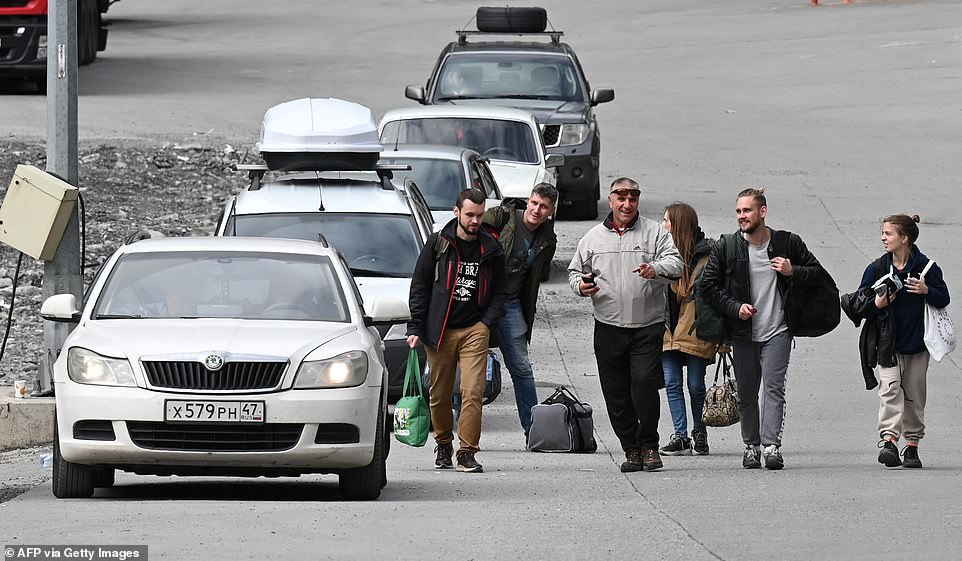 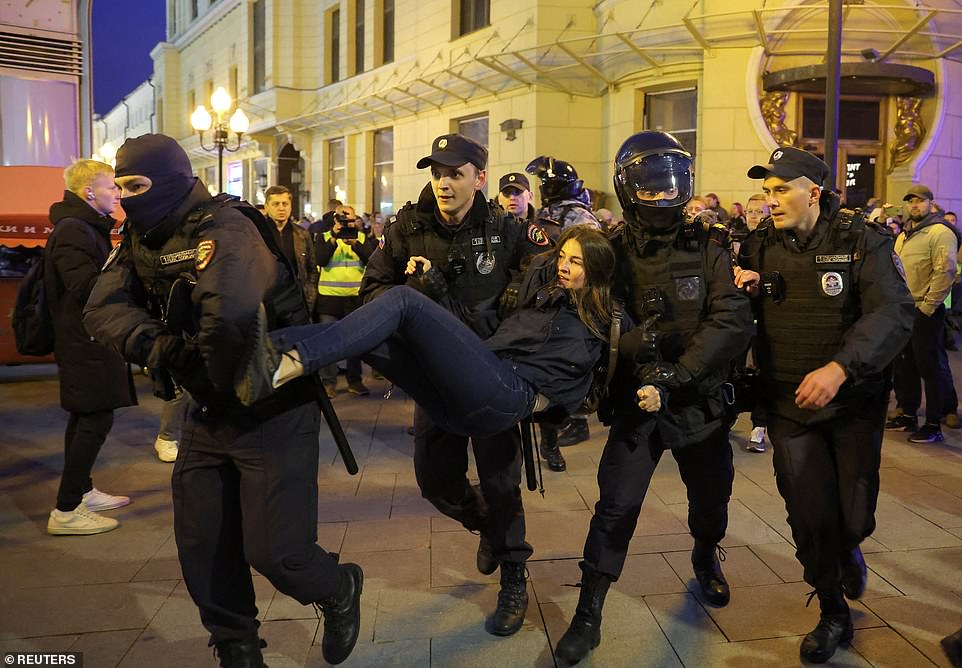 More than 2,000 people have been detained across Russia for protesting the draft, including 798 people in 33 towns on Saturday, according to independent monitoring group OVD-Info. Pictured: officers detaining a woman in Moscow on Wednesday

Although the European Union is now largely off limits to most Russians, with direct flights stopped and its land borders increasingly closed to them, an exodus of Russian men fleeing military service is creating divisions among European officials over whether they should be granted safe haven.

German officials have voiced a desire to help Russian men deserting military service and have called for a European-wide solution. Germany has held out the possibility of granting asylum to deserters and those refusing the draft.

In France, senators are arguing that Europe has a duty to help and warned that not granting refuge to fleeing Russians could play into Putin’s hands, feeding his narrative of Western hostility to Russia.

‘Closing our frontiers would fit neither with our values nor our interests,’ a group of more than 40 French senators said. Turning away fleeing Russians would be ‘a mistake by Europe in the war of communication and influence that is playing out.’

Yet other EU countries are adamant that asylum should not be offered to Russian men fleeing now – when the war has moved into its eighth month. They include Lithuania, which borders Kaliningrad, a Russian Baltic Sea exclave. Its foreign minister, Gabrielius Landsbergis, tweeted: ‘Russians should stay and fight. Against Putin.’

Ukraine’s president today spoke of how Russia’s rush to mobilise hundreds of thousands of recruits is a tacit acknowledgement that its ‘army is not able to fight’.

Speaking to U.S. broadcaster CBS, Ukrainian President Volodymyr Zelenskyy also said he’s bracing for more Russian strikes on Ukraine’s electrical infrastructure, as the Kremlin seeks to ramp up the pressure on Ukraine and its Western backers as the weather gets colder. Zelenskyy warned that this winter ‘will be very difficult.’

‘They will shoot missiles, and they will target our electric grid. This is a challenge, but we are not afraid of that,’ he said.

He portrayed the Russian mobilisation – its first such call-up since World War II – as a signal of weakness, not strength, saying: ‘They admitted that their army is not able to fight with Ukraine anymore.’

His counterpart in Latvia, also an EU member bordering Russia, said the exodus poses ‘considerable security risks’ for the 27-nation bloc and that those fleeing now can’t be considered conscientious objectors since they did not act when Russia invaded Ukraine in February.

Many ‘were fine with killing Ukrainians, they did not protest then,’ the Latvian foreign minister, Edgars Rinkevics, tweeted. He added that they still have ‘plenty of countries outside EU to go’.

Finland also said it intends to ‘significantly restrict’ entry to Russians entering the EU through its border with Russia. A Finnish opposition leader, Petteri Orpo, said fleeing Russian military reservists were an ‘obvious’ security risk and ‘we must put our national security first’.

Russia is pressing on with its call-up of hundreds of thousands of men, seeking to reverse recent losses. Without control of the skies over Ukraine, Russia is also making increasing use of suicide drones from Iran, with more strikes reported today in the Black Sea port city of Odesa.

For Ukrainian and Russian military planners, the clock is ticking, with the approach of winter expected to make fighting much more complicated. Already, rainy weather is bringing muddy conditions that are starting to limit the mobility of tanks and other heavy weapons, the Washington-based Institute for the Study of War said today.

But the think-tank said Ukrainian forces are still gaining ground in their counteroffensive, launched in late August, that has rolled back the Russian occupation across large areas of the northeast and which also prompted Putin’s new drive for reinforcements.

The Kremlin said its initial aim is to add about 300,000 troops to its invasion force, which is struggling with equipment losses, mounting casualties and weakening morale. The mobilisation marks a sharp shift from Putin’s previous efforts to portray the war as a limited military operation that wouldn’t interfere with most Russians’ lives.

The mobilisation is running hand-in-hand with Kremlin-orchestrated votes in four occupied regions of Ukraine that could pave the way for their imminent annexation by Russia.

Ukraine and its Western allies say the referendums in Kherson and Zaporizhzhia regions in the south and the eastern Luhansk and Donetsk regions have no legal validity, not least because many tens of thousands of their people have fled. They also call them a ‘sham.’ Some footage has shown armed Russian troops going door-to-door to pressure Ukrainians into voting.

The Kremlin also appears to have sent soldiers to force Ukrainians to vote , according to residents who say troops came to their homes in occupied territories to enforce the ‘vote’. 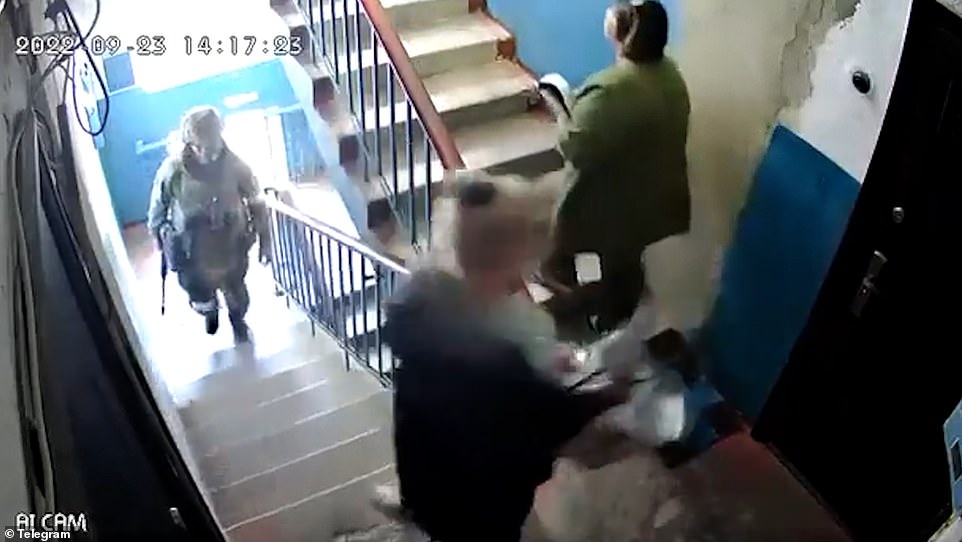 ‘My family was just forced to vote at gunpoint in Russian cosplay of a “referendum” in southern Ukraine,’ said Maxim Eristavi, journalist and co-founder of Hromadske International, a broadcasting station in Ukraine.

The Ukrainian journalist posted a video purporting to show armed soldiers entering the hallways where his family live and forcing them to vote in favour of joining Russia.

Western countries have accused Russia of staging illegitimate referendums in Ukraine as a pretext for annexing parts of its neighbour.

Kyiv called out the exercise as a bare-faced attempt by Russia to hold on to occupied territory now threatened by the Ukrainian army’s counter-offensive.