Russia flexed its naval muscles Sunday in its second rehearsal of the huge Main Naval Parade, set to take place in St Petersburg next week.

The annual event is a national holiday celebrated on the last Sunday of July and sees the superpower show off its latest state-of-the-art warships, weaponry and aircraft.

Typically, a two-hour procession sees the battleships sail along the Neva River in St.Petersburg and the Port of Kronstadt.

Submarines, missile ships and minesweepers – along with fighter jets – were all seen taking part in rehearsals in the Gulf of Finland today.

Navy Day, which will be held on July 25 this year, was previously cancelled by the Soviet Union in 1980 before being brought back by President Vladimir Putin in 2017.

Warships and marine air force units will join the procession from the Baltic, Black Sea, Northern and Pacific Fleets as well as the Caspian Flotilla, while naval bases across the country will put on similar displays. 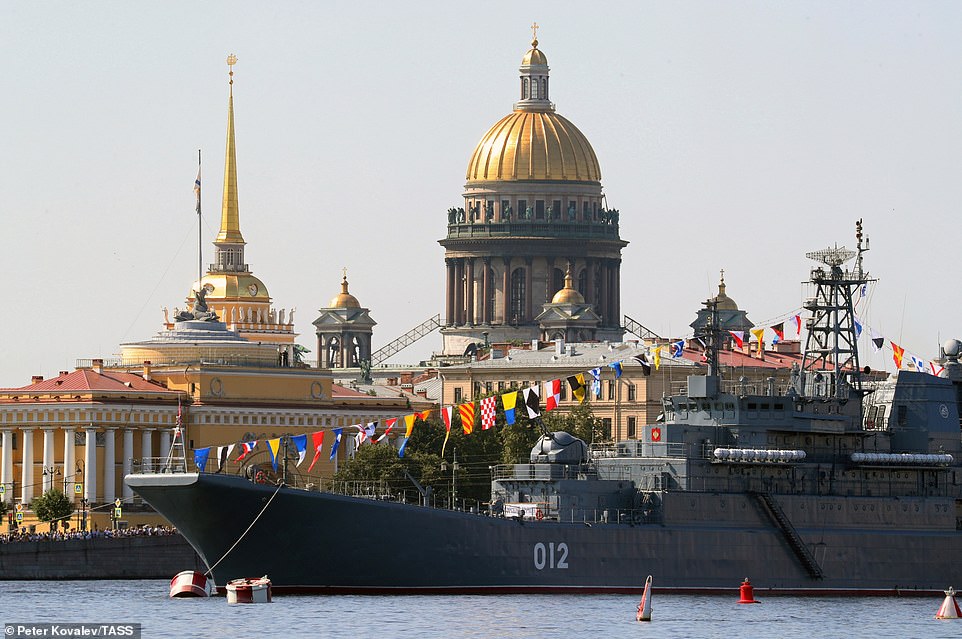 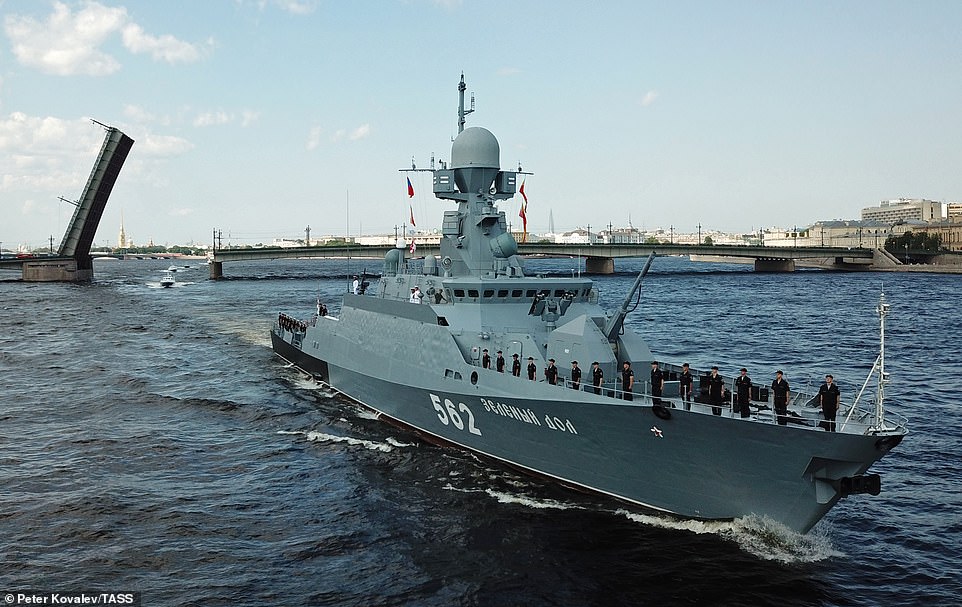 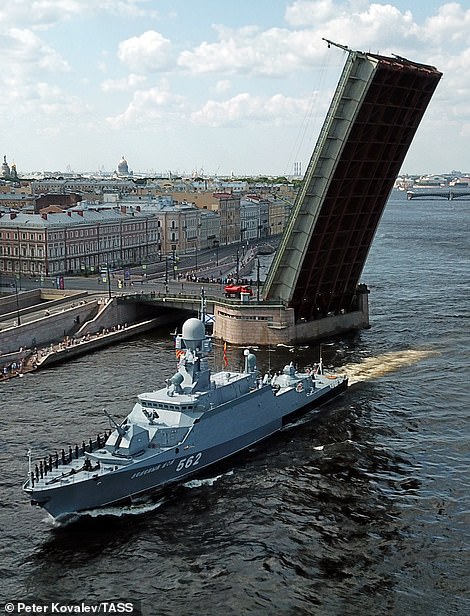 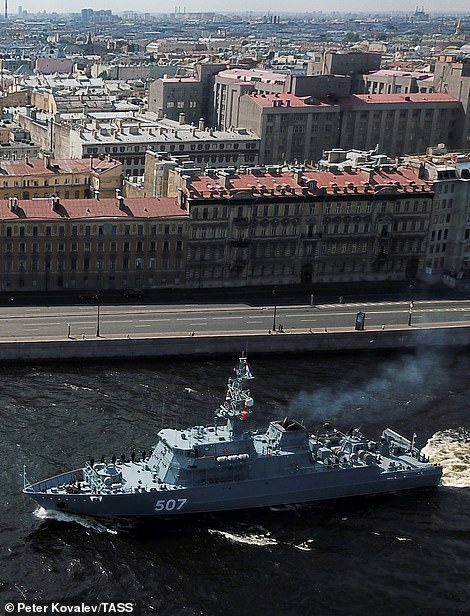 The Zelyony Dol missile ship (left) and the Alexander Obukhov minesweeper sail down the Neva River in St. Petersburg in a practice run for next week’s big event 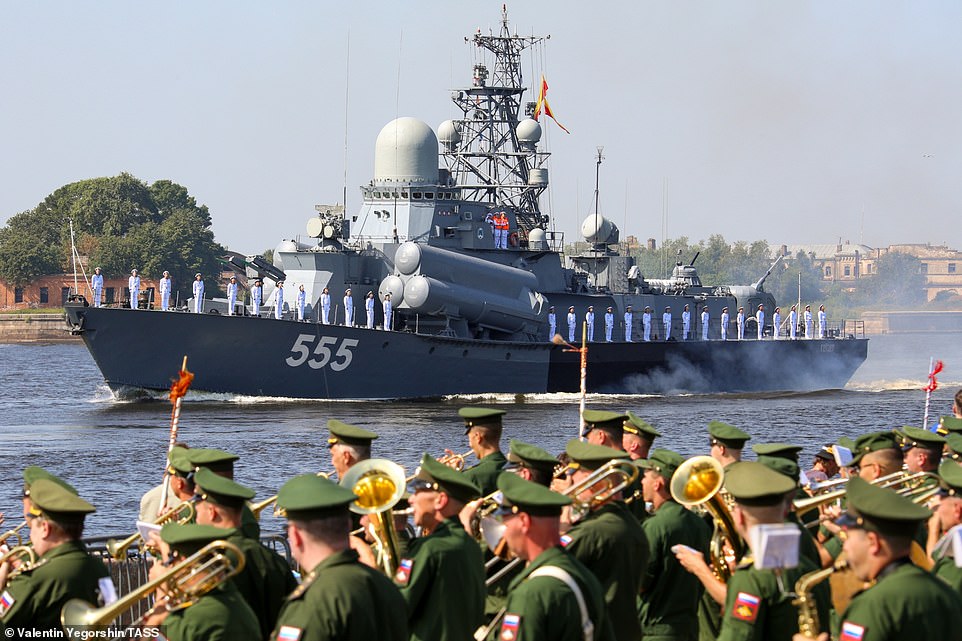 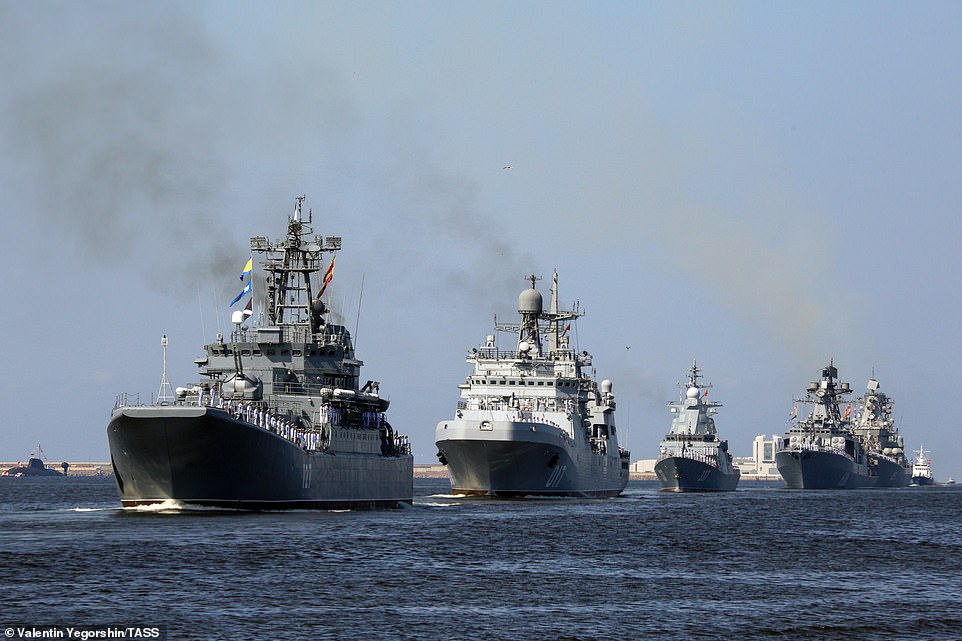 Six warships are pictured as they take part in the Russian Navy Day military parade rehearsal on Sunday, a week before the real event 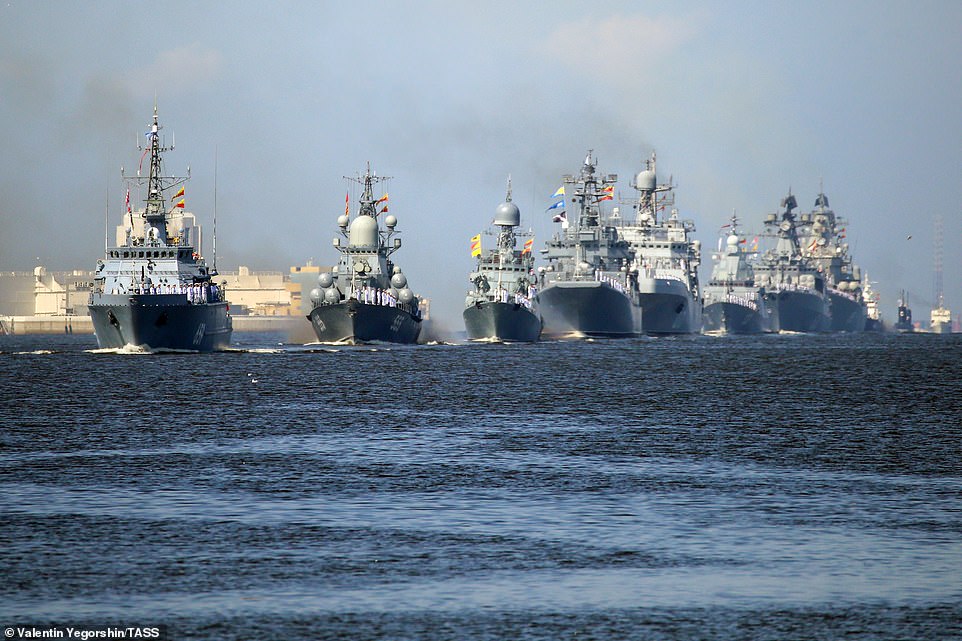 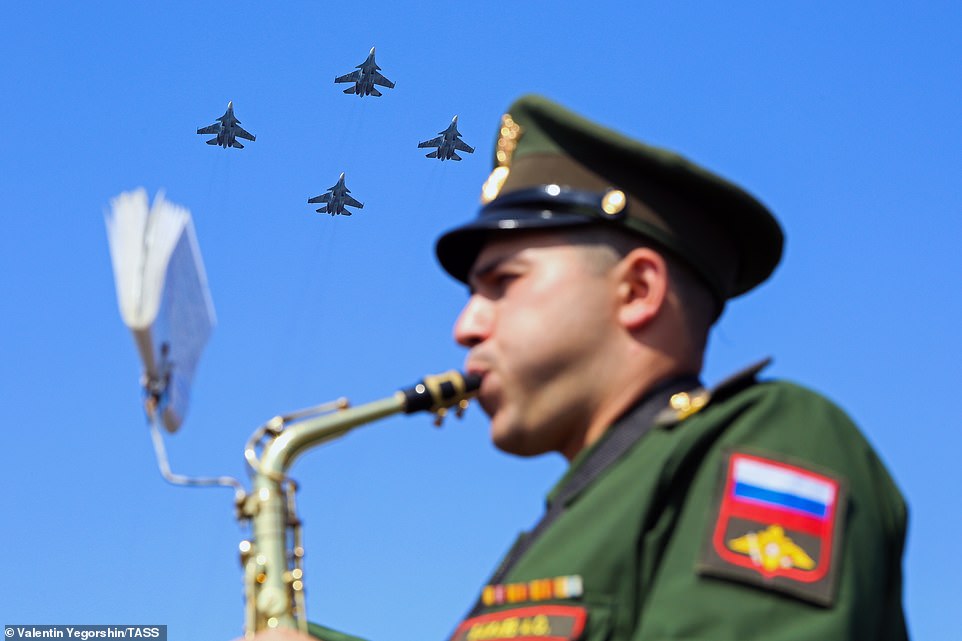 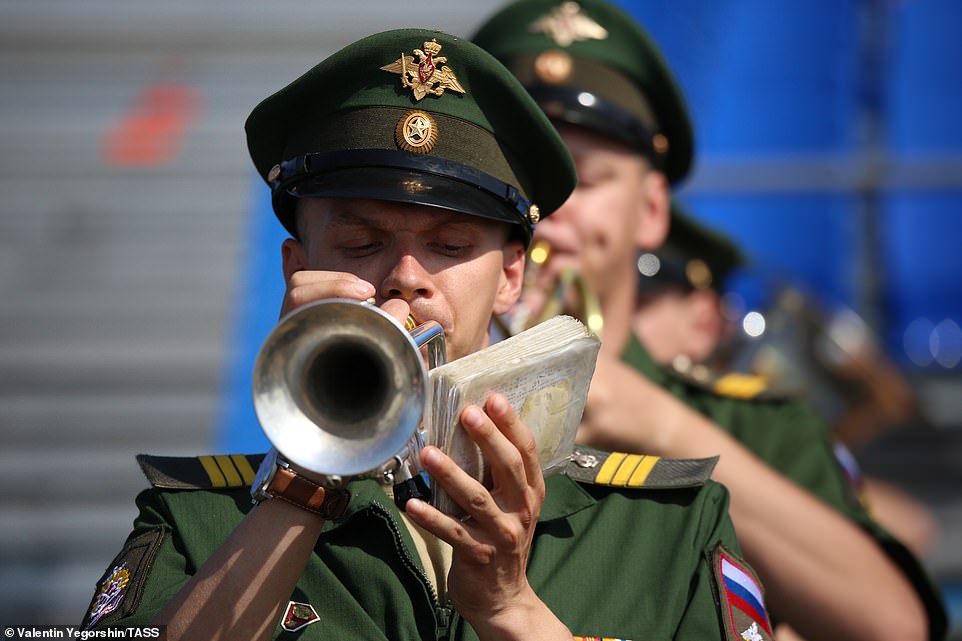 A band member reads his sheet music while blasting his trumpet in St Petersburg on Sunday, in a practice run for a huge military parade on July 25 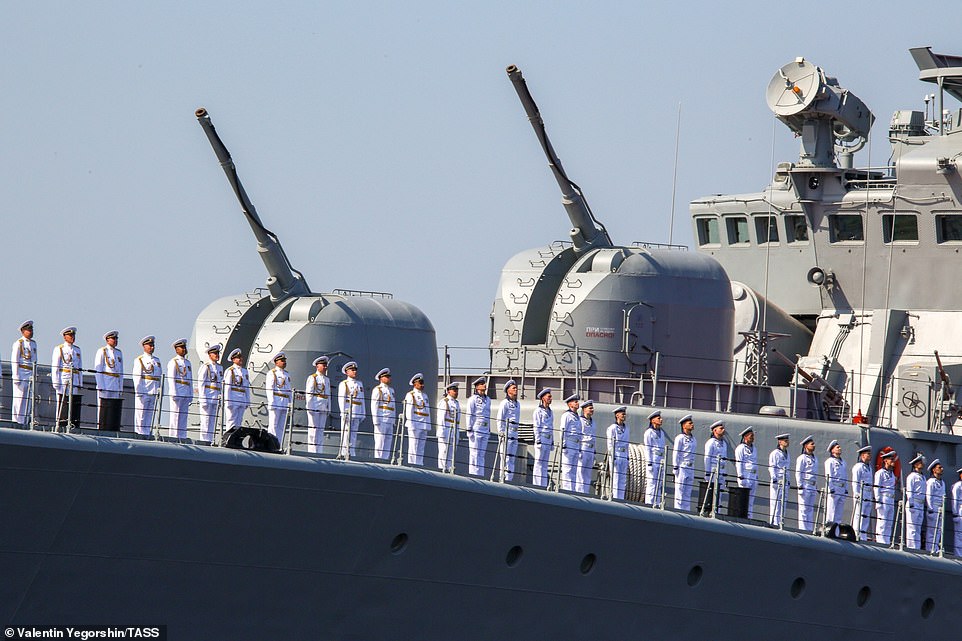 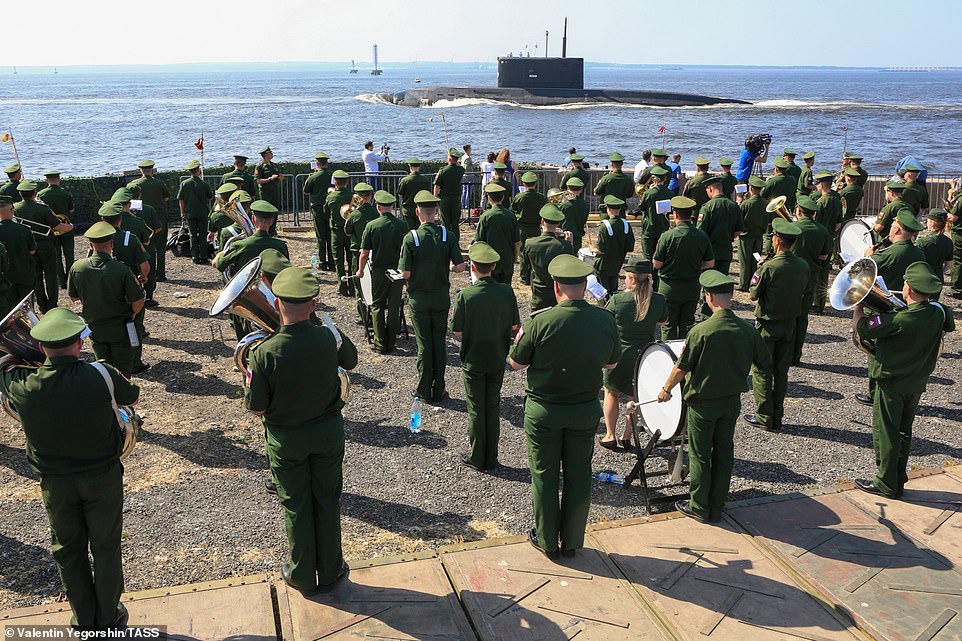 Drummers, trombone players and musicians formed part of the band rehearsal on Sunday as a Volkhov submarine cruised past in the Gulf of Finland 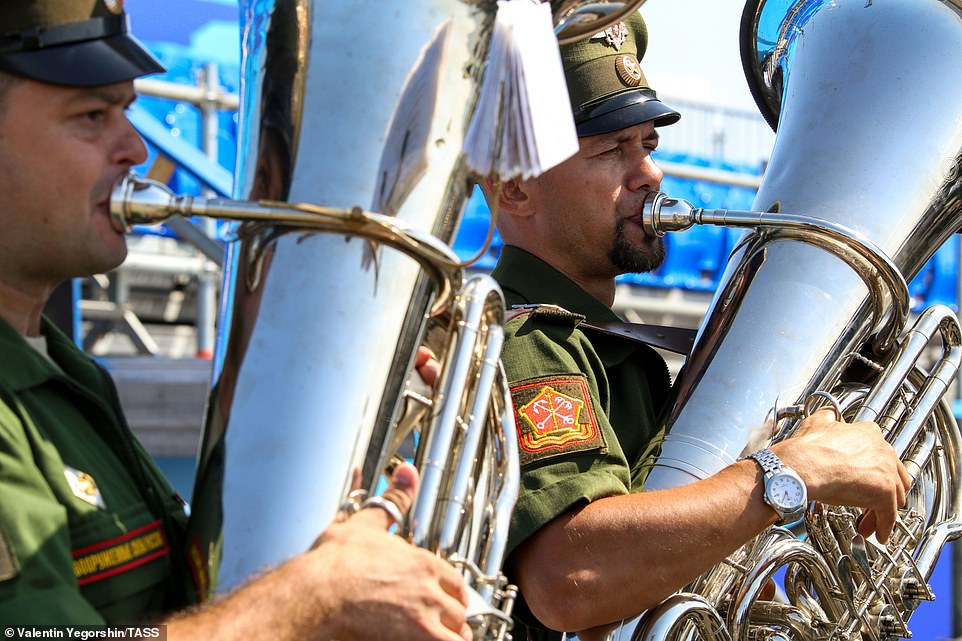 They will raise the Russian flag before Putin addresses the nation, followed by the firing of a 21-gun salute.

The large-scale event has at least two practice days in the weeks prior.

Last Wednesday, Russian warships lined up in the Gulf of Finland for their first rehearsal.

Russia’s Defence Ministry said: ‘The first rehearsal of the parade formation of the ships that will participate in the Main Naval Parade in the Neva River took place in the Gulf of Finland. 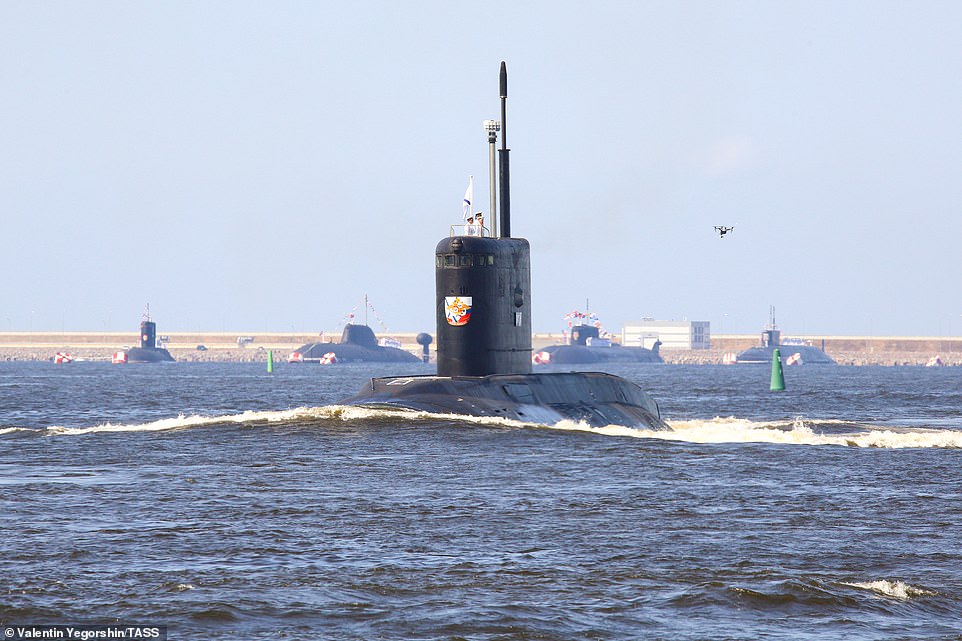 A submarine slowly emerges from the waters of the Gulf of Finland, while another four linger in the background 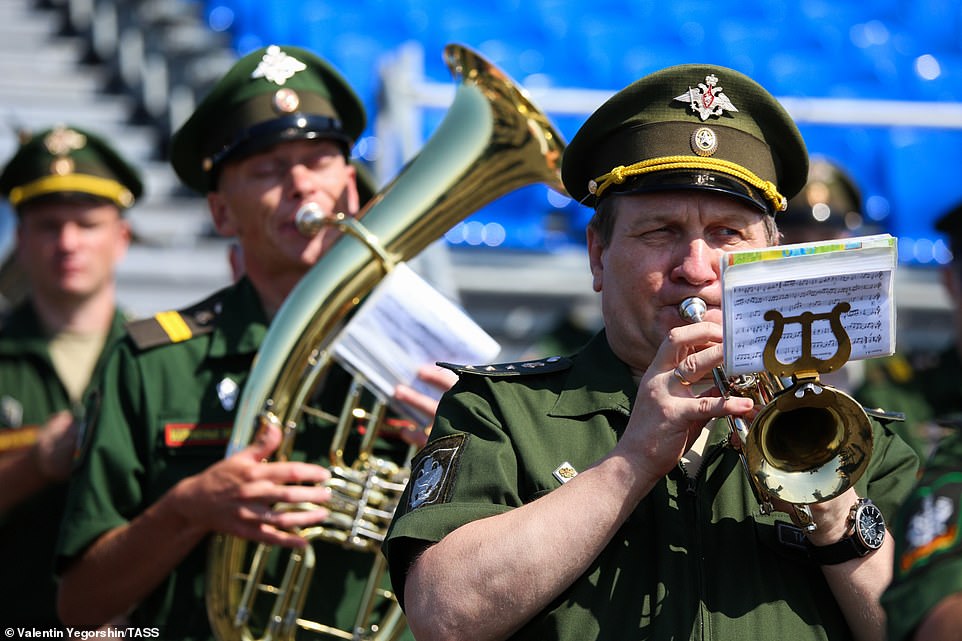 A military band member blows on his trumpet during rehearsals for Russia’s Navy Day, set to take place on July 25 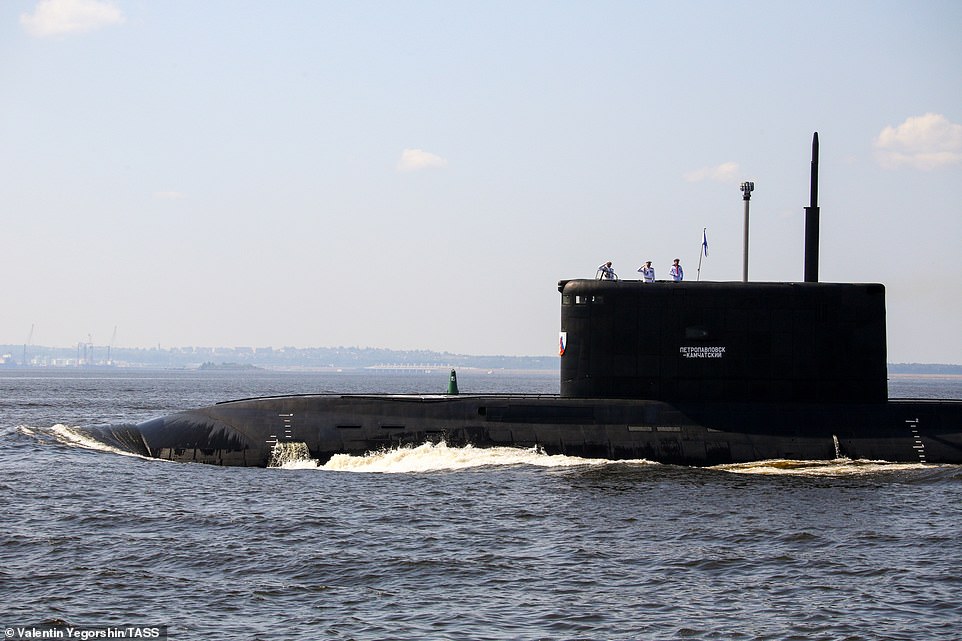 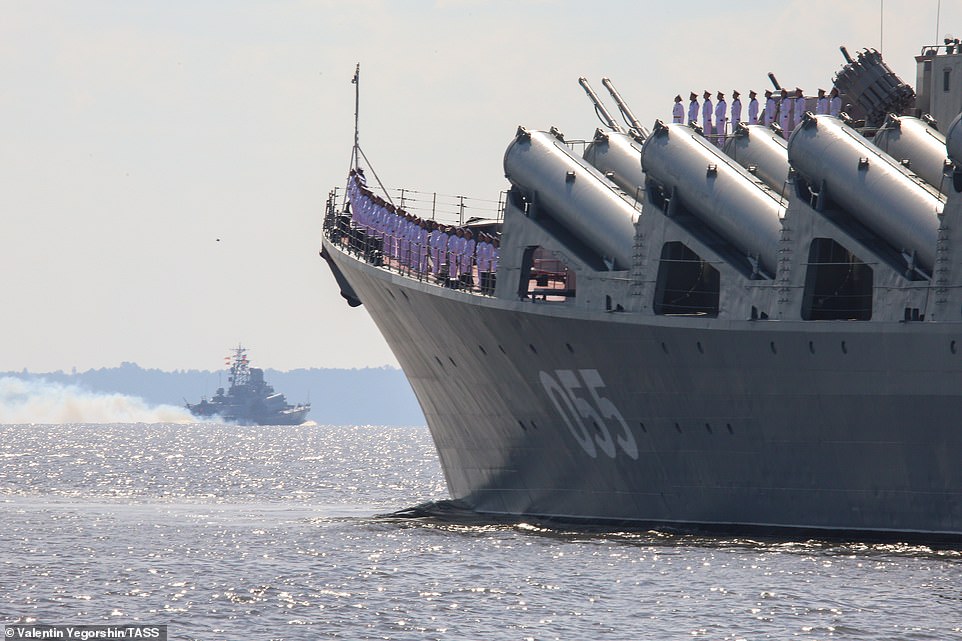 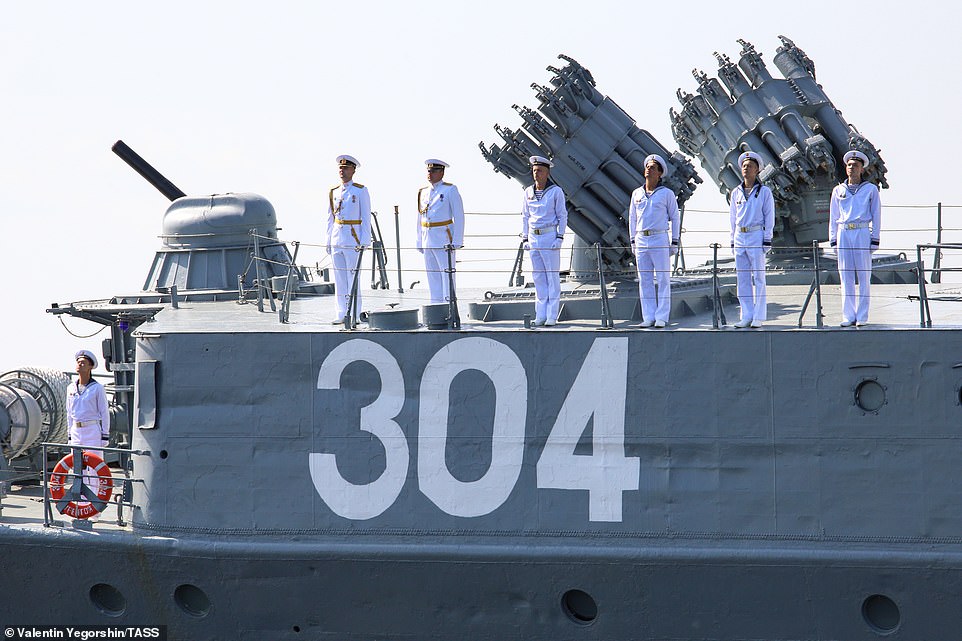 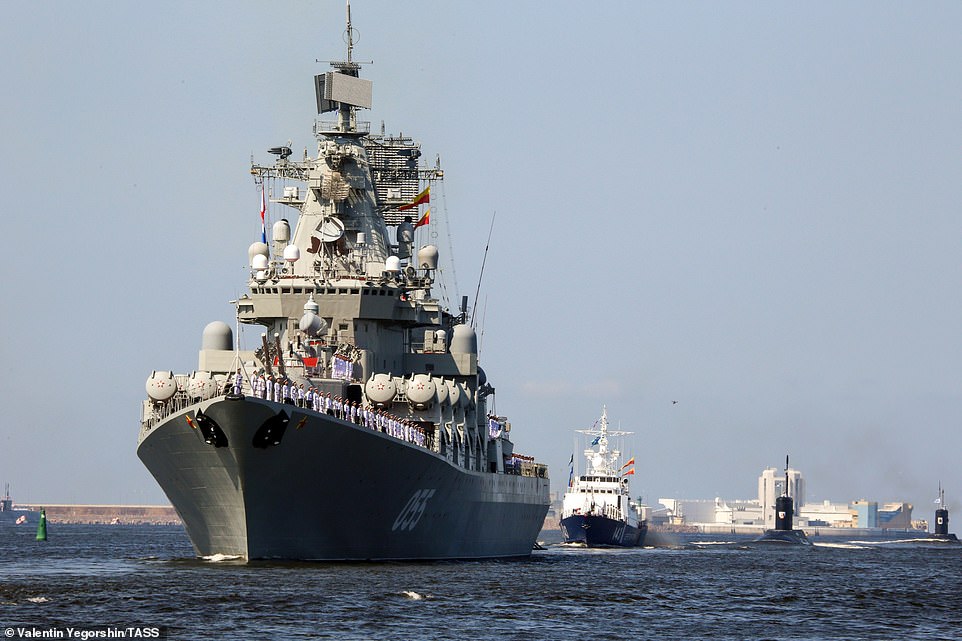 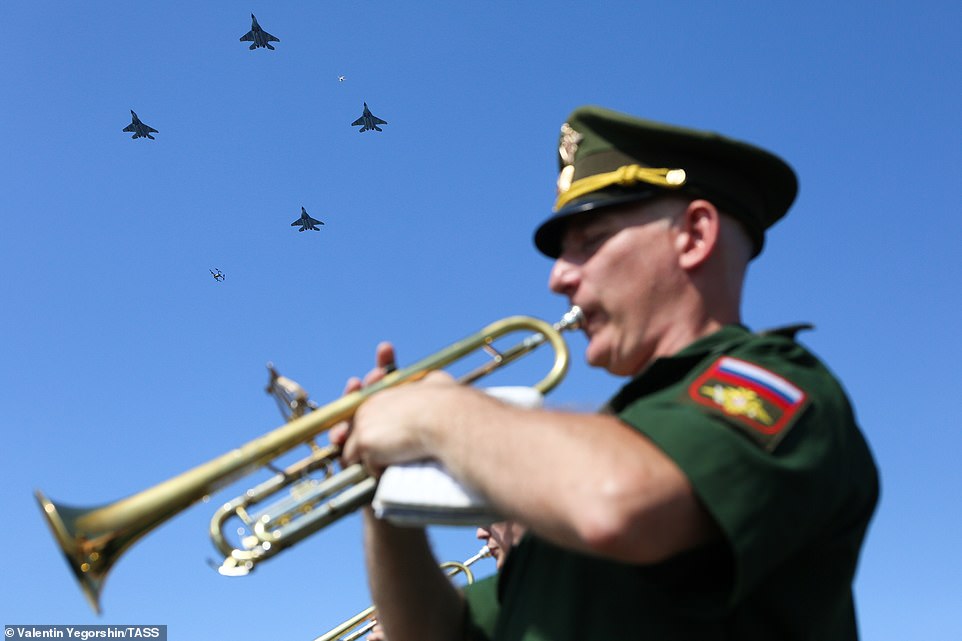 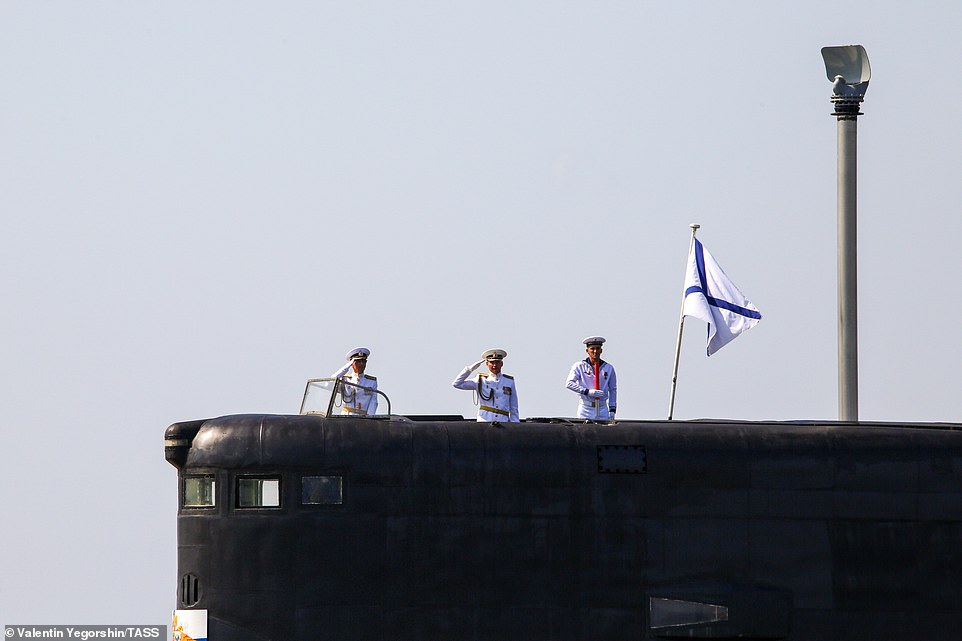 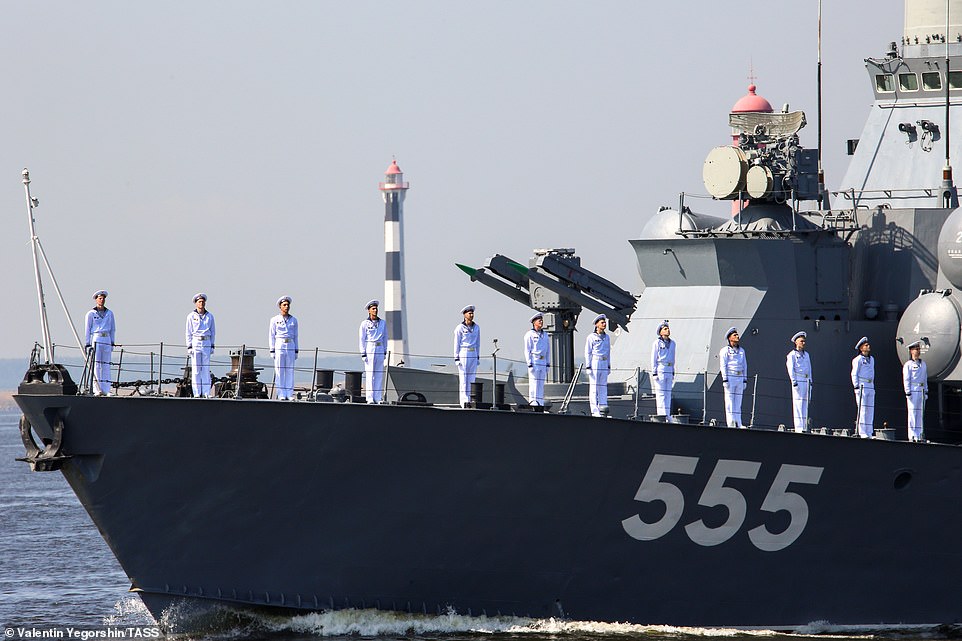 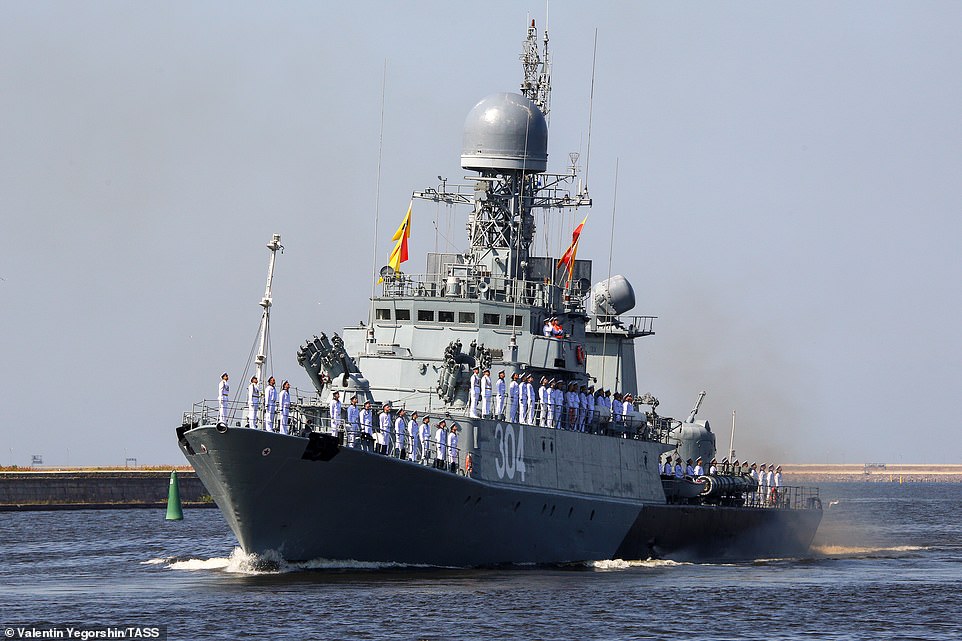 This anti-submarine corvette Urengoy will be one of dozens of warships paraded through St. Petersburg next week, under the watchful eye of Putin 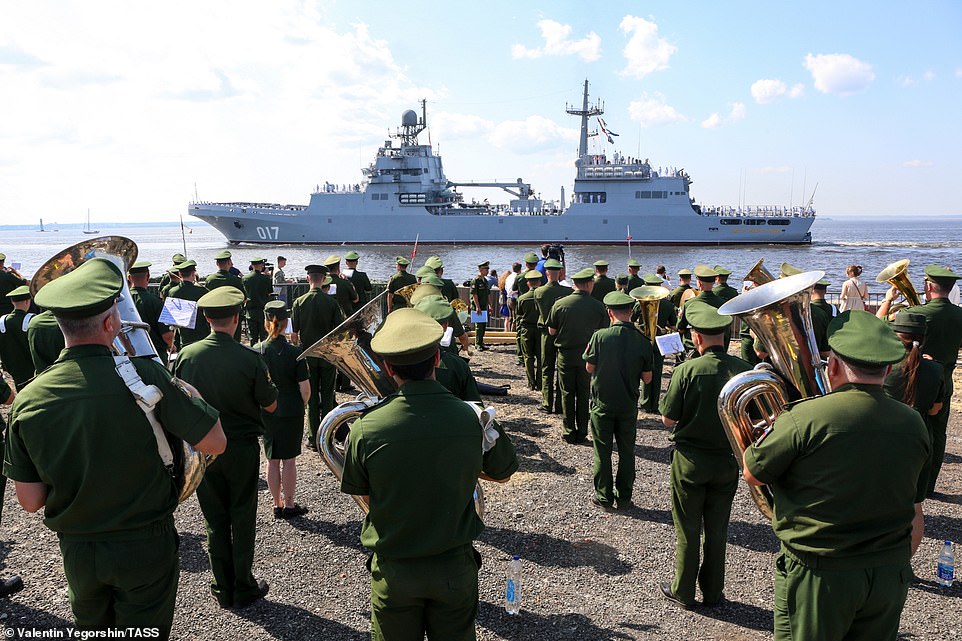 As the band practice their notes for next week’s big day, the Pyotr Morgunov landing ship can be seen sailing by in the distance 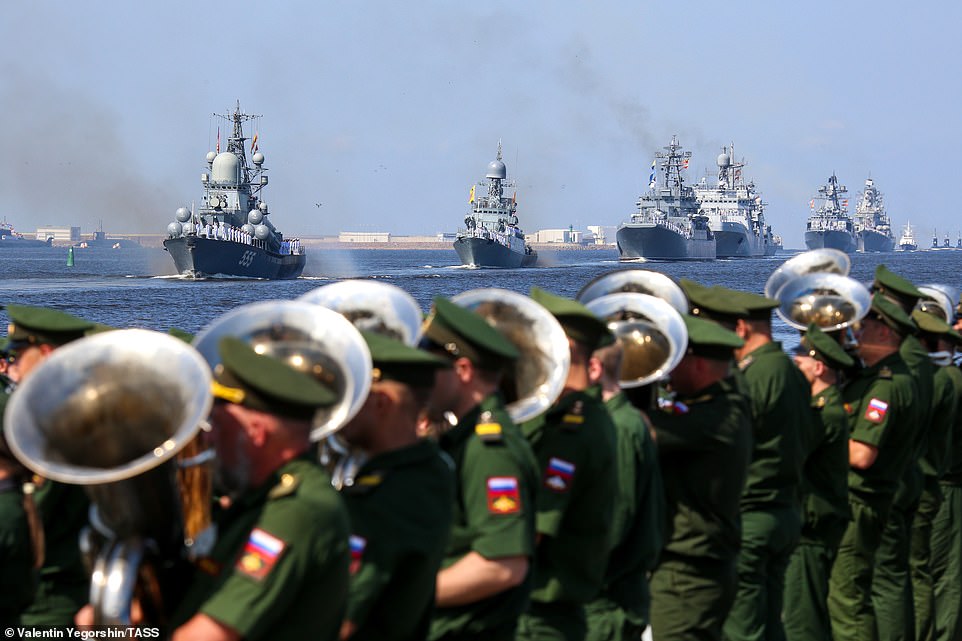 Military band performs during a rehearsal as a convoy of warships cruise past them in Kronshtadt, St. Petersburg 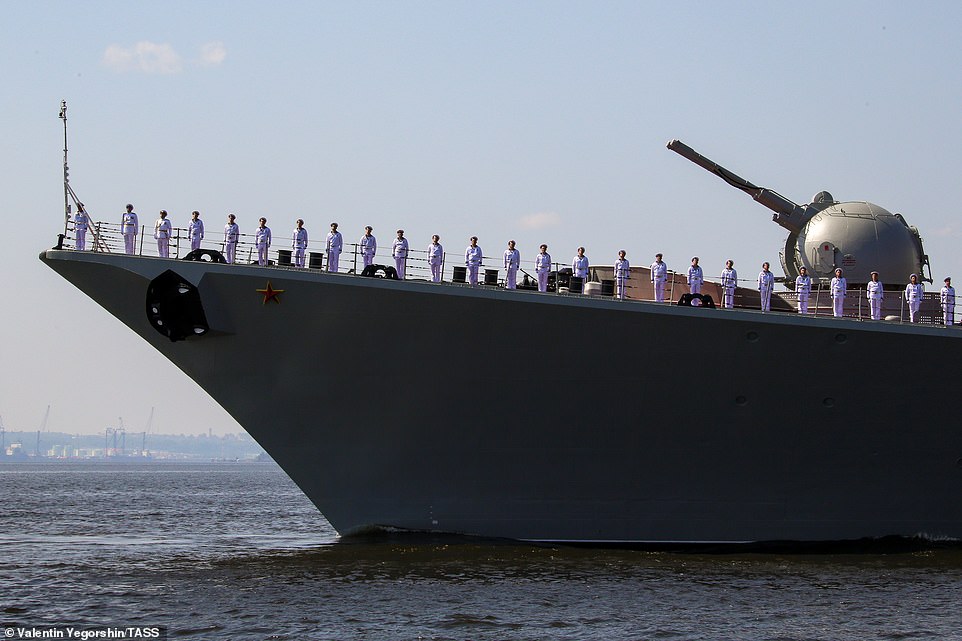 Marshal Ustinov cruiser is lined with sailors during a rehearsal for Navy Day in Kronshtadt, St. Petersburg on Sunday 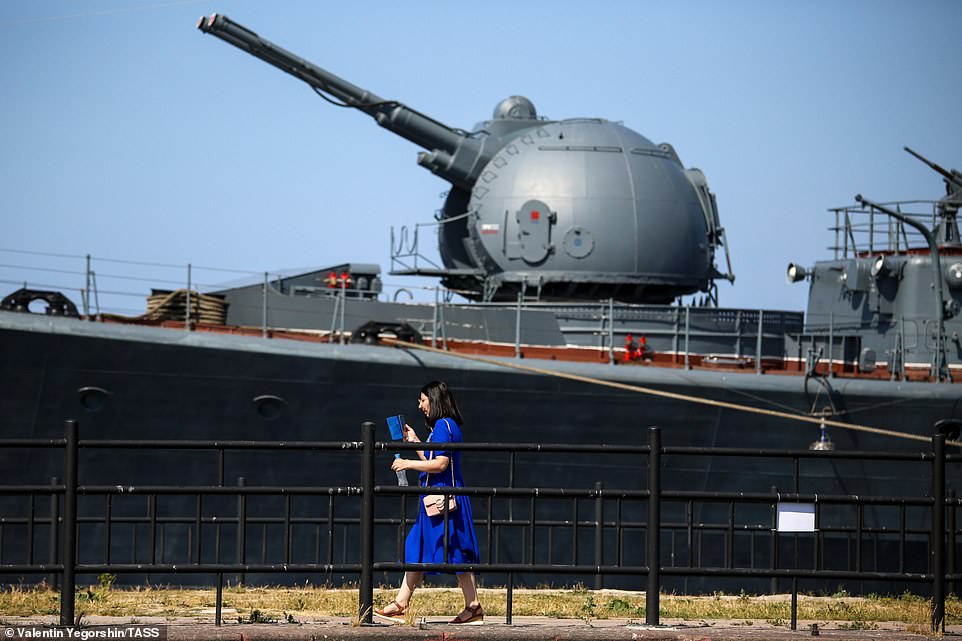 ‘Ships and boats of various classes assigned for the Neva component of the Main Naval Parade practiced moving at the designated speed as part of the parade formation’s tactical groups and organising communications while on the move.’

The Main Naval Parade on July 25 will mark the Fleet’s 325th anniversary.