In Edinburgh green they honoured Prince Philip through his official colour: ROBERT HARDMAN observes a poignant day as loved ones can finally pay tribute to the Duke of Edinburgh

Normally, a discreet word would ensure that there was no wardrobe clash between the senior royal ladies and the Monarch at a major state occasion.  Not so yesterday.

Very touchingly, it was a case of the opposite.

For there, in the royal front row at Westminster Abbey, we saw the Princess Royal, the Duchess of Cornwall and the Queen herself all dressed in what is known as ‘Edinburgh green’. It had been the Duke’s official colour – on everything from staff liveries to cars (and even the old London taxi he used to drive around the capital).

Here was just one of so many delightful homages to the great man yesterday as loved ones, friends and admirers from every facet of his extraordinary life were finally able to come together and pay the full tribute denied him at his funeral.

Ahead of this service, there had been one question on all their minds: would Her Majesty feel up to joining them?

Right on time came the answer as the state trumpeters of the Household Cavalry marched out on to the High Altar to announce that the Sovereign had drawn up outside. 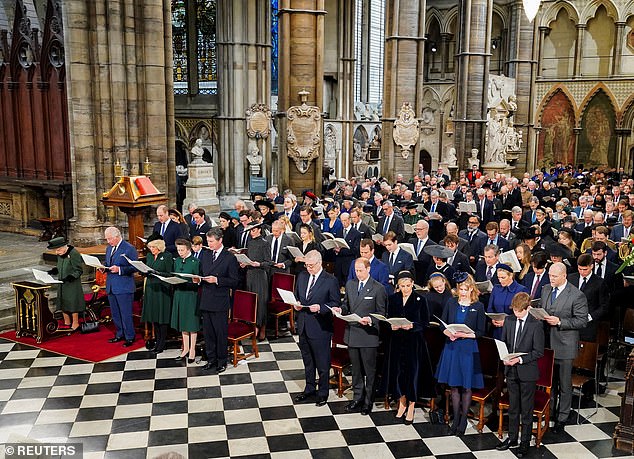 She entered by the shortest possible route, walking up the South Transept with the aid of a stick, as had been expected.

What had not been expected was that, of all those to whom she might turn for support, she would be escorted by the Duke of York.

He was making his first public appearance since paying off his US courtroom accuser and his subsequent ostracism from royal and public life.

No one, of course, could begrudge him his place at the heart of a family service to salute his late father.

However, despite the best efforts of senior royal officials to ensure that the Duke stuck to the original plan, arriving with his daughters and his siblings, he had apparently been dead set on this revised arrangement.

If it was bound to distract attention from the main focus of the ceremony, no one was going to countermand what had clearly been agreed with the Queen. ,

As it was, she seemed in little need of physical support anyway.

She moved at a stately pace up the aisle, before taking her seat next to the Prince of Wales.

She then parked her stick to her right and her handbag to her left.

During all the hymns, she rose unaided, knew all the words and, by the end, had dispensed with her spectacles.

Gleaming out from her lapel was her beloved ‘scarab brooch’, the one the Duke gave her in 1966.

Just behind her were five of her great-grandchildren, all enchantingly wide-eyed at their first experience of a state occasion.

Historians may later record this as the first official greeting line for a future King. 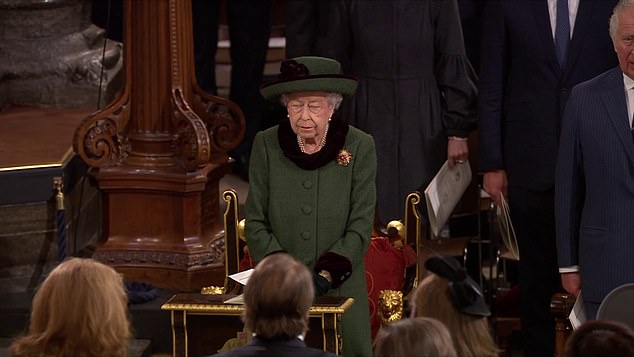 The Queen at  her husband Prince Philip’s memorial service

Prince George and Princess Charlotte handled the long line of fully robed clergy with aplomb – as well as a smile, eye contact and a firm handshake.

To the Queen’s front and left were all those international royal houses to whom the Duke was not just a much-loved ally but, in many cases, directly related (as a former Prince of Greece and Denmark).

Four kings, five queens (not including our own) plus assorted crown princes and princesses were a reminder of the old joke that the Duke was ‘more royal than the royals’.

Opposite the royal pews were the Duke’s more immediate family, the grandchildren of his sisters.

They included Prince Philipp and Princess Xenia of Hohenlohe-Langenburg, Bernhard, the Hereditary Prince of Baden and assorted members of the House of Hesse.

Alongside them were British political leaders, including the Prime Minister, Boris Johnson, and the Foreign Secretary, Liz Truss.

With the Defence Secretary on Ukraine duty, his place was taken by the MoD Minister of State, Jeremy Quin, who is also a member of the Admiralty Board.

They ranged from the Kings of Spain and Holland to representatives of bodies including the Scottish Youth Hostels Association, the Pakistan Society and the Caravan Club.

It could include none of the 992 organisations from all over the world of which the Duke had been a proud patron or member.

True, the Duke had never been keen on a memorial service, always believing that his achievements should be left to speak for themselves.

However, the pandemic had also stripped his funeral of several important ceremonial elements which he himself had planned so carefully.

And it precluded any role for some of the local clergy at the royal estates, whom the Duke had come to know so well.

So they were all thrown back in the mix, along with something the Duke had certainly not wanted – but which the Queen most certainly did: a eulogy.

In fact, there were two of them.

The first was an upbeat and moving tribute from Doyin Sonibare, 28, whose life had been transformed thanks to the best-known of the Prince Philip’s many legacies. 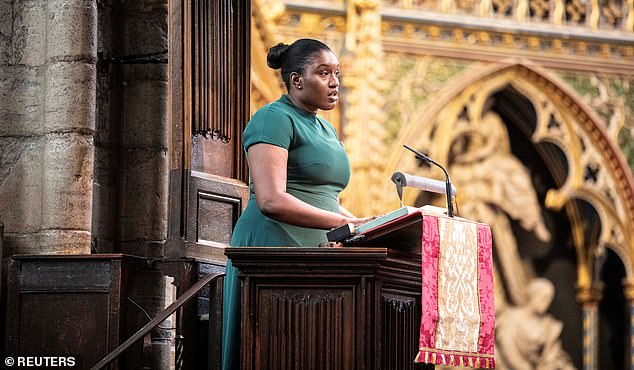 Doyin Sonibare, pictured, 28, who took part in the Duke of Edinburgh’s Award scheme

Having embarked on the Duke of Edinburgh’s Award scheme as a 15-year-old East London schoolgirl, she had completed her gold award by 18.

The experience, which included voluntary work in Gambia, had given her the self-confidence to aim high in the job market, despite not having a degree.

‘On reflection, I never thought I could do half of the things I have done in the last decade, yet I’ve been able to do so because of the opportunities presented to me,’ she explained.

Today, she is not only an advertising account executive but also studying for a PhD at Brunel University.

She was wearing the Gold Award brooch which she had received from the Earl of Wessex and was also loyally dressed in Edinburgh green, although she insisted afterwards that this was just a ‘crazy coincidence’.

The formal address came from the Dean of Windsor, the Rt Rev David Conner.

‘I am not sure that Prince Philip had much time for the theological controversies that divide people. His faith was a heartfelt trust in a loving God,’ he said, ‘such trust, such hope, as could unite people in a common endeavour.’

The Duke had known successive Deans of Windsor as old friends.

One of them, Robin Woods, had helped him build his theological retreat, St George’s House, in the heart of Windsor Castle.

Another, Michael Mann, had enjoyed such enthusiastic theological jousting with the Duke that their long letters to one another were eventually published as a book called ‘A Windsor Correspondence’.

Having been in post now for 24 years, David Conner could be said to have known the Duke as well as any of them.

‘Like the rest of us,’ he went on, ‘he was part of flawed humanity. Unlike most of us however, he was one of those rare people who remained true to, and guided by, what you might call “an inner spiritual compass”.’ 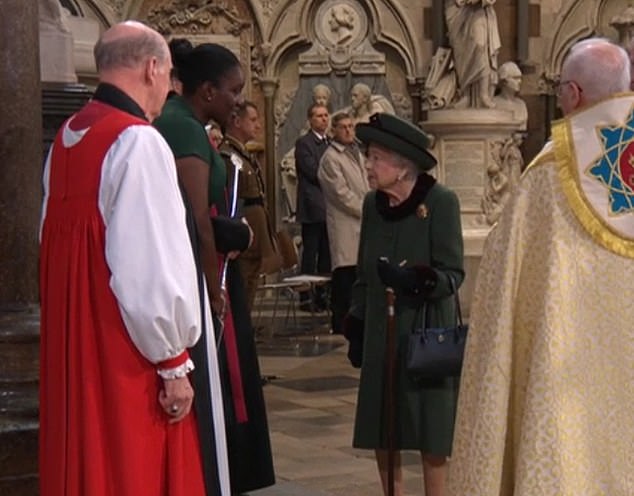 One of the first duties which the Queen had given the Duke on her accession was running all the royal estates.

Though he never said so, he was always proud of the job he did with all of them.

So, the clergy from all of them had been invited to say a prayer yesterday.

Unfortunately, a last-minute Covid diagnosis meant that the poor rector of Sandringham was stuck at home.

The music – especially the hymns – was every bit as sublime as the Duke had wanted.

And afterwards, the Queen left in manifestly good spirits.

She paused, with a big smile, to thank Miss Sonibare for her kind words before returning directly to Windsor, accompanied yet again by the Duke of York.

The various family groups then boarded a fleet of buses.

The European royals were taken to St James’s Palace for a reception with the Prince of Wales and other members of the family.

The German cousinhood – who had assembled before the service at Buckingham Palace – were bussed down to Windsor Castle for lunch with the Dean.

The Duke’s sisters, who had all married German nobility, had all been debarred from the Duke’s wedding in 1947, on the grounds that it was too soon after the end of the Second World War.

He had remained devoted to them and their offspring, however.

All the royal children and grandchildren have grown up close to their network of little-known continental cousins.

Just three representatives of this broad diaspora had been able to attend his funeral.

As well as lunch, they were all given their chance, at long last, to pay their respects at the spot where Uncle Philip now rests beneath St George’s Chapel.

The Prince of Wales was then due to join them all for tea.

Like everyone else in the Abbey, they found yesterday to be a glorious completion of that sad, unfinished business, left over from April 2021.

‘A very special occasion beautifully enacted,’ reflected Commodore Anthony Morrow, the last captain of the Royal Yacht, on his way out of the Abbey.

‘We all just felt very honoured to be a part of it.’