EXCLUSIVE – ‘You don’t defeat a crazy man with nuclear weapons, with weakness’: Navy SEAL who killed Bin Laden slams US response to Putin, the Pentagon for pushing their climate change plans and says Russia and China are ‘laughing at us’

Navy SEAL Rob O’Neill served his country in 400 combat missions over 16 years and shot and killed Osama Bin Laden during arguably the most famous, deadly raid in modern American history.

The Montana native knows more than most about facing off with terrorists and the grim realities of war.

But as he has watched bloodthirsty Vladimir Putin’s invasion of Ukraine from afar, he has seen soldiers dying for a leader who’s ‘lost his marbles’ with an endgame to cement his place in the history books, and has witnesses the U.S. responding with what he perceives as weakness.

In an exclusive interview with DailyMail.com, the decorated veteran criticized the Biden administration for cancelling a nuclear missile test last weekend while Russian forces started to attack Ukrainian citizens and how the Pentagon is more concerned with their climate change agenda than trying to deter Putin.

‘You don’t defeat a crazy man with nuclear weapons, with weakness. It’s like trying to stop a schoolyard bully by appeasing him, it’s nonsense.

‘When I was in the service, the main concern was whether you could perform the task at hand. Now they (the Pentagon) are wasting time and resources making warships green. The unfortunate truth is Russia and China are laughing at us when we talk about climate change in the military.’

He said he doesn’t care about his legacy, despite slaying the founder of Al Qaeda after a decade-long hunt, and is only focused on making sure his children are cared for.

O’Neill also said politicians like Lindsey Graham shouldn’t be talking about assassinating Vladimir Putin for TV ratings, but insisted he wouldn’t be against someone in the Kremlin’s inner circle taking Putin out ‘like Julius Caesar’. 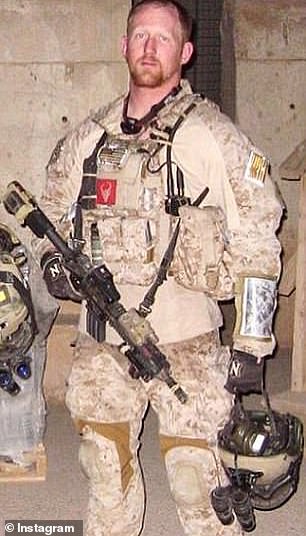 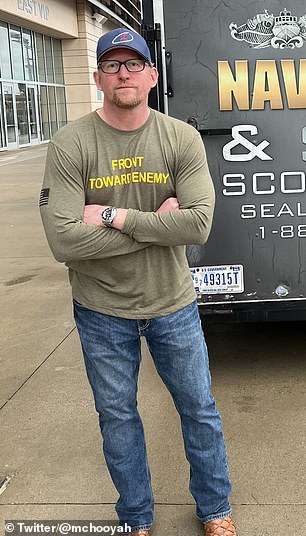 Navy SEAL Rob O’Neill, who shot Osama Bin Laden, criticized the Biden administration for cancelling a nuclear missile test while Russian forces started to attack Ukrainian citizens and how the Pentagon is more concerned with their climate change agenda than trying to deter Putin

‘The level of corruption is as high as it has ever been in the United States. These politicians talk from both sides of their mouths. They say one thing and vote for the other. They need handlers’.

He was a member the SEAL Team Six that took out the 9/11 mastermind in the deadly raid in Abbottabad in 2010 and has been portrayed on the big screen in Zero Dark Thirty, Captain Phillips and Lone Survivor.

He has now published a book with Medal of Honor winner Dakota Meyer called ‘The Way Forward’ about lessons from their lives and military careers.

O’Neill admitted that initially he didn’t think Putin would invade Ukraine because he ‘made the mistake of trying to make sense of an insane man’s decision’.

He believed the Russian leader would manipulate the West into spending more money on defenses by stationing hundreds of thousands of troops on the border, but never going in. He acknowledges he was wrong.

With the Ukrainian resistance shooting down helicopters and jets, he fears Putin will move to heavy, long-range artillery. Pentagon officials have already indicated it is happening with Russian strikes in western Ukraine, just 60 miles from the Polish border.

He said the U.S. is ‘crushing’ Russia with crippling economic sanctions, but they still need a ‘posture of strength’.

‘That’s when it gets extremely bloody. That’s when s*** gets real,’ he said about Russian rockets coming from over the horizon and landing in Ukrainian cities full of civilians.

‘We haven’t seen anything as bad as this since 1939. We used to joke about movies where they said a virus would cause a lockdown. We thought that was crazy. I am a big believer in normalcy bias, that nothing bad can ever happen because it never has.’

When the United States starts talking about climate change being the ‘number one concern for national security’, he says, the rest of the world starts to mock us.

‘They’re worried about making their warships green and then their, and I’ve had people that are still in the military that are getting out at special operators because instead of going to the range or to the weight room and training for war they’re taking classes on gender studies white rage.’

He called climate initiatives ‘ridiculous’, especially with mounting fears Putin could turn to nuclear weapons during the conflict.

‘The United States has decided we are going to be the “good guys” by ‘saving snapping turtles’, and the planet will get a ‘a lot hotter, quicker’ with a nuclear war. 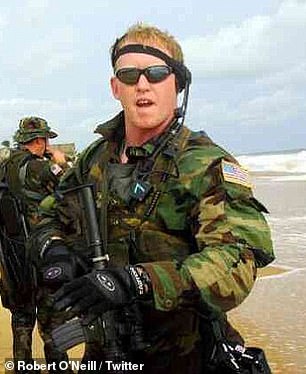 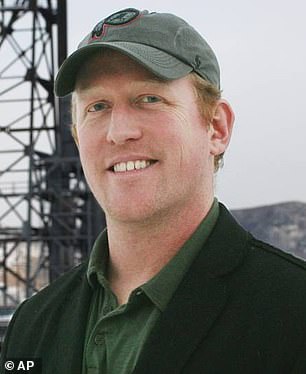 O’Neill also said politicians like Lindsey Graham shouldn’t be talking about assassinating Vladimir Putin for TV ratings, but insisted he wouldn’t be against someone in the Kremlin’s inner circle taking Putin out ‘like Julius Caesar’

He said he hopes the invasion will reach a point where the Russians are ‘getting their butts kicked so badly’ that the West and Ukraine will make a deal with Moscow to give them a way out.

‘I’m an optimist and that’s my hope. But my prediction was so bad at first, I am. I’m just going off what I hope happens.

‘Most people in the world can agree. There’s one person that can to stop this. All he needs to do is stop it.’ 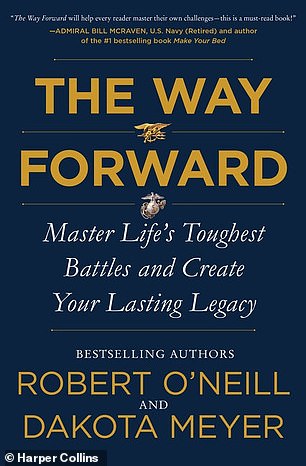 He has now published a book with Medal of Honor winner Dakota Meyer called ‘The Way Forward’ about lessons from their lives and military careers.

He says the gets upset when videos of Russian helicopters getting shot down are shared all over social media.

‘There are Russians on those planes and I’ve had friends dying helicopter crashes, and there’s nothing cool about it.

‘Most of the soldiers don’t want to be there. It’s all because one guy in the Kremlin has lost his marbles.’

O’Neill said there was no way the U.S. could do to Putin what he did to Bin Laden by killing him in a SEAL raid and most Americans are getting their ideas of war from TV and social media.

‘We’d have to know where he is and hit him with an airstrike. You would have to figure out how we get into Russia, how they don’t see us and what we do when we land’

‘Leave your video game tactics at home, because they don’t work.’

‘You can’t correct the past. You can definitely learn from the past and if it didn’t work, you could change it. The only thing that we have in common is that the clock keeps ticking. So you can live in the past or you can move forward and you can, you can try to do it the best you can now and look forward to tomorrow.

‘We’ve all had our first day somewhere. We’ve all been scared, but eventually you get used to it and it’s, it’s what you can do now. What is the way forward? We are all cut from the same cloth.

He asks why do we constantly end up ‘fighting each other’ in overseas conflicts and says most soldiers from opposing sides would get along if they ‘sat down over a coffee in a Paris cafe’.

‘And how does a fat kid from Montana who doesn’t know how to swim, become the Navy seal in Osama’s bedroom. If I can do it, anyone can’.

Rob O’Neill and Dakota Meyer’s The Way Forward is available to purchase here. 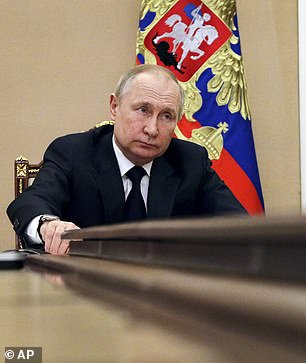 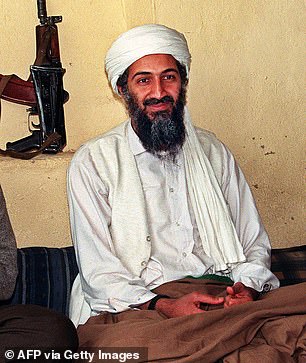 O’Neill said there was no way the U.S. could do to Putin what he did to Bin Laden by killing him in a SEAL raid and most Americans are getting their ideas of war from TV and social media 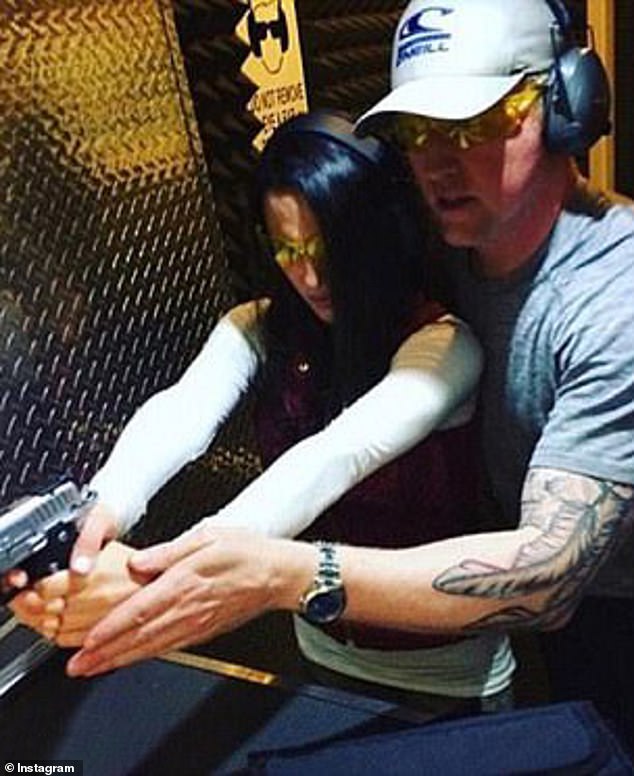 O’Neill is pictured with his wife Jessica at a gun range. The pair got married in 2017