Thanks to the surge in the price of iron ore on global markets, the share price of mining company Rio Tinto has jumped 16 per cent in the past three months and the company earned $13 billion in underlying profit last year.

Yet Rio’s wealth only compounds the anger the whole nation should feel at its wilfully negligent decision on May 26 to dynamite a 46,000-year-old Indigenous heritage site at Juukan Gorge in Western Australia in search of more mining profits. 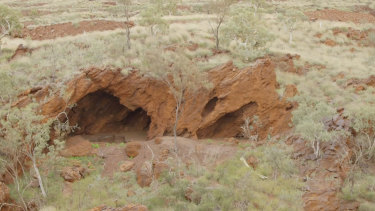 On Wednesday, an interim report of inquiry into the incident, by the Senate's joint standing committee on northern Australia, described Rio’s failure to protect the site as “vandalism” and said Rio Tinto’s corporate culture prioritised commercial gain over meaningful engagement with the Puutu Kunti Kurrama and Pinikura people, the site’s traditional owners.

The inquiry, which received a rare exemption from WA’s quarantine laws, travelled to the remote Pilbara to experience first hand the destruction wrought by the mining behemoth and the “overwhelming grief” of the local Indigenous people. The committee has tried to find out what went wrong and, more importantly, what can be done to make sure it does not happen again.

Rio Tinto has removed Jean-Sebastien Jacques, the chief executive at the time, but it has a lot more work to do before it regains the community’s trust and its social licence to operate.

The inquiry found that Rio “knew the value of what they were destroying but blew it up anyway” and deliberately chose not to inform Indigenous people about alternative plans that would have saved the gorge. As a bare minimum, the inquiry says, Rio should be forced to use its billions to pay compensation to the local Indigenous people and, to the extent it is possible, restore what is left of the precious site.

The report also raises broader and harder questions about the whole mining industry and the legislation, state and federal, that is supposed to protect Indigenous heritage. In Western Australia, for instance, regulators often issue approvals to mine before detailed heritage surveys are complete or Indigenous people have been properly consulted.

In order to secure mining royalties under Native Title legislation, Indigenous groups are often pressured into accepting gag orders which make it impossible to complain when heritage sites are threatened. Federal laws are practically useless.

The inquiry has called for a moratorium on any further disturbance, damage or destruction of potential heritage sites, even in cases where WA has issued permits, until these holes are plugged and the whole industry can prove its good faith. Yet the mining lobby is already mobilising against tougher scrutiny. WA Liberal senator Dean Smith says he opposes a moratorium, because it would be a handbrake on the mining and resources industry. He defended existing WA rules and said the real issue was reform of “governance and transparency” at Indigenous corporations. He said heritage protection should be left up to WA.

The Minerals Council of Australia and WA’s Chamber of Minerals and Energy echoed his comments on Thursday.

The mining industry is certainly vital for the Australian economy, earning more than $100 billion a year, and any new rules must be carefully crafted to strike a balance between economic reality and protecting heritage. But the destruction at Juukan Gorge has done enormous damage, not just to the Indigenous people concerned but also to Australia’s global reputation as a humane and civilised country.

Even though companies such as Fortescue Metals and BHP say they have better safeguards in place than Rio, they have acknowledged the need for a rethink and halted some work while they sort out some of the issues raised by the Juukan Gorge incident.

WA and the mining industry will have to accept this sort of short-term disruption and enact some serious long-term reforms to ensure this act of barbarism can never happen again.